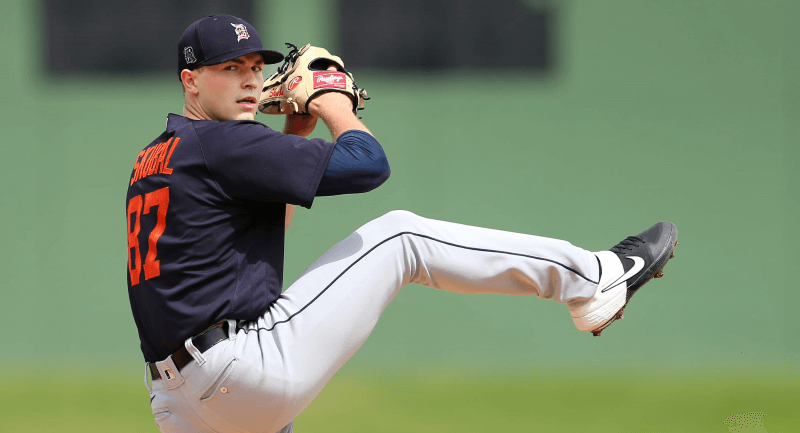 So, last week’s theme was injuries. This week’s theme is, ehh, more injuries! There is more tumult within the list this week than any other week to this point. The losses of Jack Flaherty and John Means are particularly painful. The total of starters we trust as true studs grow shorter by the day. Who replaces them in my starting pitcher rankings? There are actually some intriguing new names to mention, but first, some notes.

Sean Manaea, OAK (+24) – Manaea gets a huge bump up my starting pitcher rankings after his four-hit shutout of the lowly Mariners. It was his second shutout of the year, although the first one was of the seven-inning variety. He doesn’t get the bump just for this performance against a lineup that has been no-hit twice this year already, but also for his season-long consistency. The velocity on his sinker is up from 90.4 MPH last year, averaging 92.9 MPH in his last start and even touching 95.8. He’s also earning career-high whiff rates on his changeup (34.8%) and breaking ball (37.3%). All of this combined with his ability to limit the long ball (0.90 HR/9) and gracious home park, Manaea is someone you should be starting every time out.

Luis Garcia, HOU (+30) – One of the biggest early breakouts of the 2021 season comes from Houston’s Luis Garcia. Over his past five starts, Garcia has earned a 5-0 record with a 1.86 ERA, 0.93 WHIP, and 33:8 K:BB ratio over 29 innings. Not only does this run push him way up the list, but he has also earned himself a spot in that rotation the rest of the way.

Special moment in the #Astros dugout for Luis Garcia when he gets a big hug from pitching coach Brent Strom after Luis went seven innings for the first time in his big league career: 7ip, 5H, 1R, 1ER, 1BB, 6K. Luis’ ERA is a superb 2.72. pic.twitter.com/2Xu6Ki6Rbt

It’s impossible not to come away impressed with what Garcia and his hypnotic rocking horse delivery have done to this point. He held the Jays to one run in his last start in Buffalo, a very tough place to pitch. He went six innings and could have gone deeper, but was pulled at 79 pitches due to illness. Still, he earned a 38% CSW in that start. All four of his non-fastball offerings have been effective this year, with his cutter being the real key to success. The fact that he also has a slider, curve, and change also means he can avoid platoon splits. While the Astros may opt to limit his innings at some point, for now, you have to ride the Garcia Train to the end of the line.

Eduardo Rodriguez, BOS (-20) – Before I do my due diligence in ragging on the poor guy and letting you know why he’s falling, let me just say that it’s terrific that he is pitching at all this year. He had extreme complications from COVID-19 last year. Even to this point in 2021, he’s netting a 10.09 K/9 and 2.17 BB/9, which are ace-like numbers. He even has a 3.24 xFIP! There is still a lot to like here moving forward.

Brady Singer, KC (-15) – Brady is singin’ the blues these days. Or at least that’s how I assume he would react to learning that he has fallen down the Barometer. For all I know he’s a real Scatman and he’s just scattin’ his way down the mean streets of Kansas City, one hand holding a rack of ribs and the other a tub of barbeque sauce. That sounds like a pretty good time to me.

Singers’ last effort was actually a decent one: 5.2 IP, 8 H, 2 ER, 3 BB, 7 K against the Twins. Even with that factored in, his ERA still sits at 4.88 on the year. He has had some bad fortune, with a .345 BABIP and 64.1% strand rate, making his FIP a more palatable 3.44. His upside remains limited with just a sinker/slider approach, however, and he earned a mere 27% CSW in that Twins start. He’s a matchup play only at this point.

Tarik Skubal, DET (SP53) – The breakout player of the week has got to be Tarik Skubal. First, he struck out eight Yankees over six shutout innings. He followed that up with a whopping eleven K’s over five innings against the White Sox. He has struck out 8+ hitters four consecutive starts. Since the calendar flipped to May, he has a 3.09 ERA with a 14.1 K/9, 3.4 BB/9, and 1.28 WHIP. 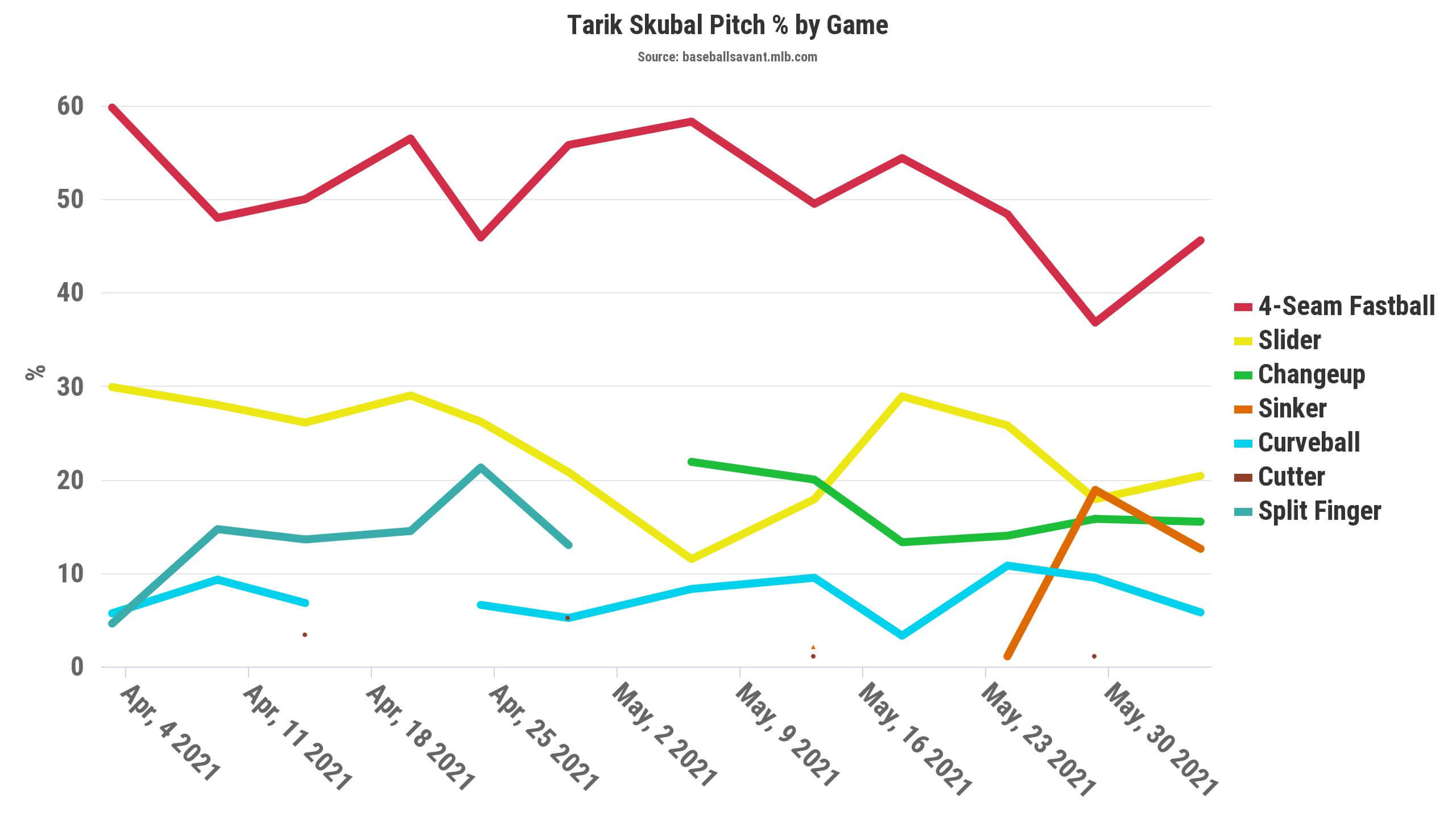 The key to Skubal’s success has been switching out the splitter for the changeup. His successful run began when he made that switch in early May. The change has earned a ridiculous 52.5% whiff rate since then, absolutely embarrassing right-handed bats. His slider has been effective as well, so he should be able to rack up strikeouts and avoid platoon splits moving forward. As long as he can continue to limit the walks and the long ball, Skubal should have a successful run moving forward and continue his move up the starting pitcher rankings.

Jackson Kowar, KC (SP70) – The 33rd overall pick in 2018, Kowar will get his first MLB start against the Angels this week. The 24-year-old right-hander has shoved at Triple-A Omaha. Through six starts, he has pitched to a 0.85 ERA with a 41:10 K:BB ratio over 31.2 IP. His fastball sits in the mid-’90s and Fangraphs puts a 70 grade on his changeup, easily his most dominant pitch. The concern is with his breaking ball or lack thereof. It has reportedly taken a step forward this year to be an average third offering, but I’d prefer to take more of a wait-and-see approach with him this week before plugging him into all my lineups.

Caleb Smith, ARZ (SP100) – Smith just barely sneaks onto the list this week after two successful starts. Smith rightfully lost his starting gig early this year after some awful results. He was much better in the bullpen, however, and so far has taken that success back to starting. His velocity was up to 92.2 MPH in his latest effort against the Brewers. If he can sustain that velocity moving forward, it would be his highest velocity since his best season back in 2018 with Miami.

The key for him is control. In this start, he managed to get 16 called strikes with his four-seam, and a sexy-time 49% CSW overall with it. There are a lot of things that can go sideways here if his control wanes, which it has at some point pretty much every season of his career. Sometimes something clicks with these guys in the bullpen though, so if you’re in a deep league, he’s worth taking a stab at.

For more great Fantasy Baseball Check out Mick Ciallela’s Rest of Season Rankings! Mick was the No. 1 Ranker on FantasyPros.com for the 2020 MLB season.