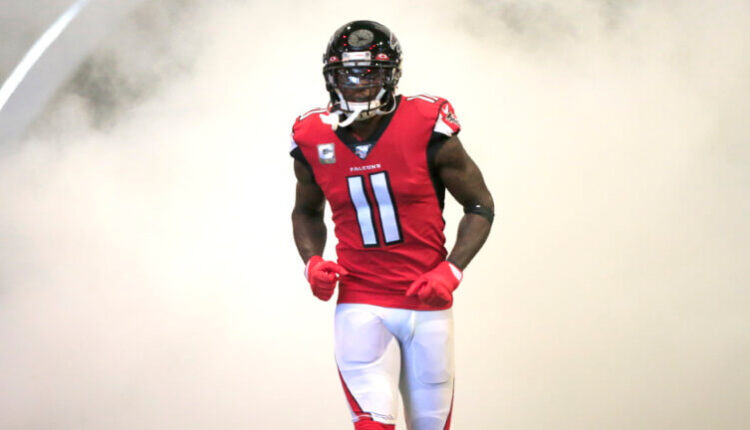 Julio Jones is on the way to “Music City”. The Atlanta Falcons all-time receiving yardage leader isn’t in Nashville to sing. However, Tennessee Titan fans will surely be singing with the acquisition of the superstar. The Titans traded away a 2022 2nd-round pick and 2023 4th-round pick for the future Hall of Fame receiver. Clearly, the Titans now possess one of the most dangerous offenses in all of football.  But how does the Julio Jones trade impact the two teams involved from a fantasy football perspective? A.J. Brown suddenly has a receiver just as good as him on the roster. Calvin Ridley takes over the “Alpha” receiver role in Atlanta, while all-world tight end prospect Kyle Pitts has a clear path to immense targets right away. Continue reading to see how the trade affects these players, along with others for their respective teams.

It makes sense to start with the player that has made the headlines, and that’s Julio Jones. The seven-time Pro Bowl selection and generational talent may be 32 years old, but he isn’t lacking talent. Despite being slowed by a hamstring strain all last season, Jones paced out to nearly 90 receiving yards a game. That including two games where Jones had to leave early due to the aforementioned injuries.

Despite lingering injury concerns, Jones is still an elite player heading into 2021. The primary question is how heavily will he be targeted in a run-heavy offense? After all, this team will still run through Derrick Henry (spoiler for those doubting Henry).

Undoubtedly, gone are the days of 130+ targets for Julio Jones. The Titans may throw the ball slightly more in 2021, but that doesn’t mean much coming from a team that attempted the 3rd fewest passes in the NFL last year. Despite this, Jones should still surpass 100 targets. Corey Davis, who signed with the New York Jets in the off-season, received 92 targets in 2020. Jones will take over his role. While Jones receptions totals will drop, expect to see a rise in efficiency and touchdowns. He won’t be the perennial top 5 wide receiver fantasy owners have grown accustomed to, but Jones should be a respectable top 20 player at the position.

A.J. Brown has likely become the most hotly debated player heading into the 2021 draft season. Considered a top-five wide receiver by some, the uncertainty surrounding Brown has suddenly grown significantly. Will he be the primary receiver on his own team? If he isn’t, how can he even be ranked within the top 12 at the position?

Good thing for fans of Brown, I think nothing changes in terms of target share for the third-year stud. It isn’t like Brown was already receiving elite target numbers. His 7.5 targets per game had him outside the top 20 last year. Despite that, Brown was the No. 6 overall wide receiver in points scored per game. Simply put, Brown could do the same thing he did last year and still be worth his current ADP. If anything, Brown could be more efficient with coverage having to account for Jones on the other side of the field. Don’t let this trade sway your opinion of A.J. Brown, he is a fantasy stud.

Ryan Tannehill was already a very good, hyper-efficient quarterback without Julio Jones. Now, this is even more true.  Even though Tannehill was only 18th in pass attempts last season, he finished as the number eight overall quarterback for fantasy football. The Titans will certainly throw the ball a little more this season, and Tannehill’s efficiency could be even better. If Tannehill can continue rushing for a high number of touchdowns, he has top-five upside at the position. Currently going around the QB13, Tannehill could be one of the best values at quarterback for 2021.

There isn’t much explanation needed here. The Titans have built a foundation, and that’s founded upon the legs of Derrick Henry. Henry is a high-end RB1 workhorse who can only be slowed down by injury. Henry has only missed one game in the past four years, so even an injury slowing him down is questionable.

That isn’t far off from his 2020 finish, but it was roughly a point-per-game increase over his pace with Julio in the game. Ridley is the best receiver in Atlanta this season and could lead all of football in targets. If there is a wide receiver outside the top three that has a chance to finish number one overall this season, my pick is Calvin Ridley.

Holy Kyle Pitts. Atlanta has already shown their card by using the highest draft capital of all time on a tight end. Now there are over 10 targets a game to be filled with Jones’s departure. While Pitts won’t receive all of those targets, expect him to start approaching those numbers once he gets fully acclimated to the NFL. There were five tight ends in football that received over 100 targets in 2020. Pitts will undoubtedly surpass that in his rookie season. While pundits will point to tight ends struggling in their rookie season, we have never seen a tight end coming out of college that has the receiving ability of Pitts. The Falcons traded for Lee Smith in the offseason to block, and they also have Hayden Hurst to line up inline every now and then. Pitts will likely be flexed out wide and used as a receiver often. This isn’t your prototypical tight end, and treat Pitts as such. He has top three overall potential this season.

Someone has to help make up for targets without Julio Jones on the roster, and these two look like the most likely to benefit. Russell Gage had one of the quietest 110 target seasons in football last year. For reference, he had more targets than Mike Evans, CeeDee Lamb, and Chase Claypool. In games without Julio last year, Gage averaged eight targets per game. That is high-end WR2 target totals. Gage should undoubtedly be a steady supplier of points, specifically for PPR leagues.

Another intriguing name in Atlanta is soon-to-be 24-year-old Olamide Zaccheaus. Although it is a very small sample, Zaccheus played in three games without Jones last year between Week 3 through 5. In those weeks, Zaccheaus received 19 targets. That target share isn’t elite, but for a player not even being thought about in redraft leagues, there is some appeal.

Matt Ryan has been a very good quarterback for years in Atlanta. A fun fact about Ryan, he has thrown for 4,000 yards or more in every season since 2011, the year they drafted Julio Jones. The three seasons prior, his highest total was 3,750 yards in 2010. A quarterback doesn’t lose that kind of connection with an elite talent without feeling the effects. Jones has long been Ryan’s safety blanket, and that blanket has been ripped off in the freezing cold. The 36-year-old franchise quarterback will need to figure out how to involve his new rookie tight end if he wants to stay as productive as he has been. If he doesn’t, we are all of a sudden talking about Ryan staring at mid to low QB2 status. Going around the QB15 in fantasy leagues, Ryan likely doesn’t provide much upside relative to his peers in 2021.

The NFL season is not as far away as you think. Get a head start with Mick Ciallela’s 2021 Fantasy Football Rankings!