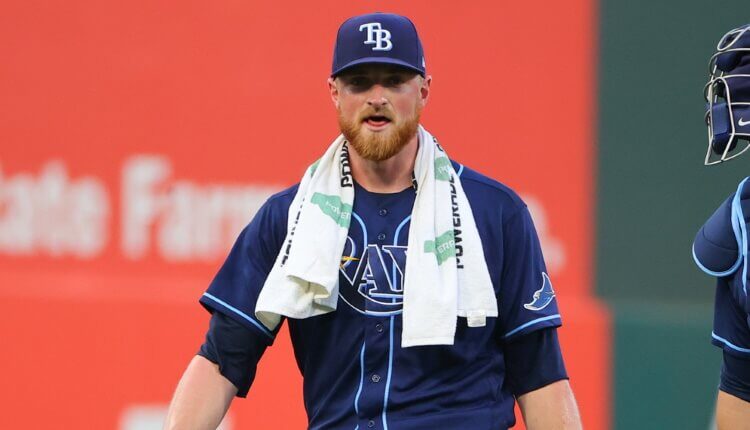 Welcome to David Mendelson’s Weekly Starting Pitcher Streamers for the week of May 2 – May 5.

It’s cool writing an article like this every week where you get to see pitchers graduate from your column. Players like Kyle Wright, Mackenzie Gore, Jesus Luzardo, and others have all gotten to the point where they are no longer considered streamers even in the shallowest of leagues. People take note of changes these pitchers have made early on in the season, and rostering players like these could end up being a league-winning move.

Drew Rasmussen (39% Rostered) Monday @OAK  – Welcome to the center of attention Drew! After six shutout innings of two hits and a walk with nine strikeouts against the Seattle Mariners last week, you have our attention. Rasmussen had an astonishing 19 whiffs on 84 pitches (22.6% swinging-strike rate) and had a 38% or greater CSW (called strikes+whiffs) on both his cutter and slider. Rasmussen is in the top 98% in terms of fastball spin and he had all of his pitches with their spin rates working well in this start.

He looks to build upon that with his start Monday against the Athletics, who have a 74 wRC+ against RHP with a .205 batting average against and an over 26% K rate. They also have a 0.93 ISO which is the fifth-worst in baseball over the last two weeks against RHP. Start Rasmussen with confidence.

Bruce Zimmermann (9% Rostered) Tuesday vs MIN  – Easily one of the biggest surprises of the season that’s not getting talked about, Zimmermann has a .093 ERA in four starts, with 21 strikeouts in 19.1 innings pitched. With John Means going down to Tommy John surgery, Zimmermann has stepped up to be the ace of this Orioles rotation. While his expected stats show some regression coming, Zimmermann has made strides with both his changeup and slider. His changeup has gained almost an inch more of horizontal break and his slider has added nearly 2.5 more inches of drop.

Zimmermann faces the Minnesota Twins, who aren’t necessarily bad against LHP over the last few weeks but are in the middle of the pack in terms of ISO and only 17th in runs per game at just under four. I think Zimmermann can get the advantage in this matchup.

Michael Pineda (10% Rostered) Tuesday vs PIT – Pineda started the season with the Tigers a few weeks late but has looked serviceable, throwing 10 innings with four earned early on. The strikeout stuff has not been there (only two K’s in each of his first two starts), but in the right matchups, he should be able to exploit his opponent and stack up innings for your team.

Pittsburgh has the second-worst wRC+ against RHP since April 14th, with a putrid 59. They also are hitting .199 with a nearly 29% K rate. Combine that with the fact that they’re in the bottom 10 in runs per game this season and it’s a slam dunk for me with Pineda.

Nick Martinez (3% Rostered) Wednesday @CLE  – To see Nick Martinez rostered in only 3% of leagues on Fantasypros was rather shocking to me. While his ERA of 4.12 could be due for some regression, Martinez has upped his K percentage considerably this year, while lowering his O-Contact percentage to an astounding 49.2% this year (over 70% previous three seasons).

Martinez faces the Guardians who are in the middle of the pack against RHP but only batting .235 as a team. I think Martinez could be a nice streamer here.

Adrian Houser (10% Rostered) Thursday vs CIN – Adrian Houser will never be a “sexy” pick, but he’s one that can always work in a pinch. If you look at Thursday’s short slate of games, it’ll definitely be a pinch.

Houser and his 3.52 ERA will be at home against the third-lowest scoring team in baseball in the Cincinnati Reds. The Reds are batting .154 with a 28 wRC+ and an over 30% K rate over the last two weeks against RHP on the road and are always a prime streaming target to go against. All those marks are the worst in baseball. You could find a lot worse than Houser for Thursday’s games.