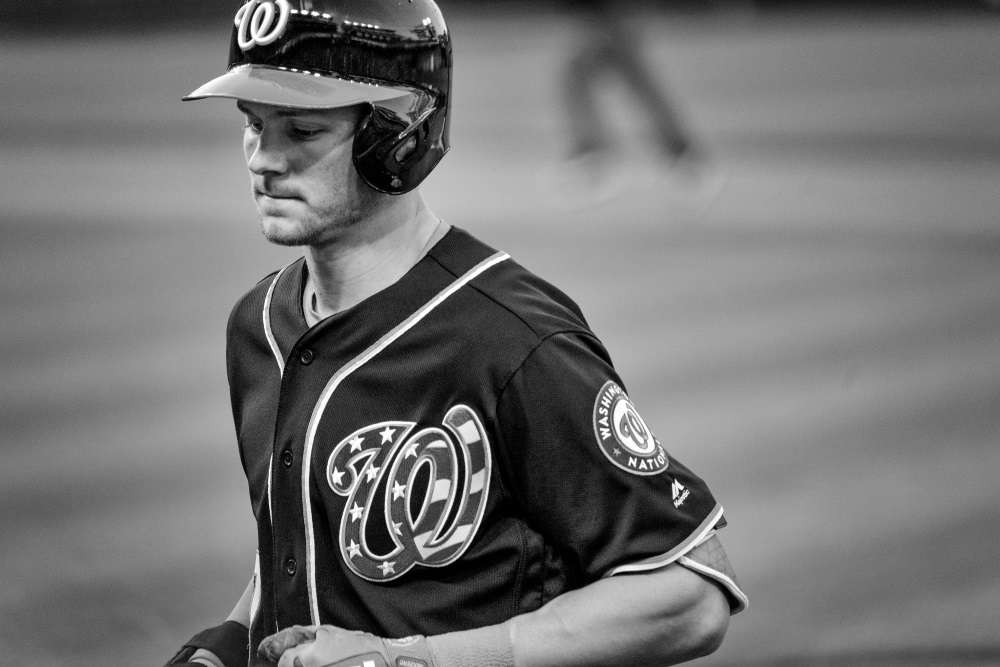 This week’s edition of Fire & Ice is all about hustle. If you’ve ever listened to Matthew Berry, you would know that nothing good comes from hustling. This joke stems from a multitude of players injuring themselves running and performing otherwise athletic feats throughout the years and succumbing to injury as a result. It’s a lot harder to hurt yourself sitting on the couch! The duo of Kole Calhoun and Trea Turner have shown us very different degrees of hustle over the last few weeks of action. Let’s see what we can expect from them moving forward.

You would be hard pressed to find a regular major league hitter worse than Kole Calhoun over the first two months of the season. Through the end of May, Calhoun had played 50 games and seen 185 plate appearances. He hit .145/.195/.179 with one lone home run. That is a wRC+ of 4, where the league average (AVERAGE) is 100. The Mets could bring back Bobby Bonilla (since they’re still paying him anyway) today and he could hit better than that.

It was at that point that Calhoun hit the DL. The team said he strained his right oblique during a session in the batting cage in between games. Whether that was a real injury or a phantom injury (also known as suckitis) to get him a breather, in hindsight, is irrelevant. Whatever their reasoning for the DL stint – it worked.

Kole Calhoun returned to action on June 18, missing a little more than two weeks of action. Nobody cared when he came back. Why should we? He had been horrendous! So bad that many were wondering if his days as a regular major leaguer were over. Well, in 30 games since his return, he has seen 116 plate appearances. He has hit .275/.336/.598 with nine home runs. You might call that a turnaround.

The numbers in July alone are especially extreme. His OPS is 1.044 over 18 July games with a 41% hard contact rate. That formerly embarrassing wRC+ is 178 in July! Take a look at some of his numbers on the season with the help of this fancy graph. 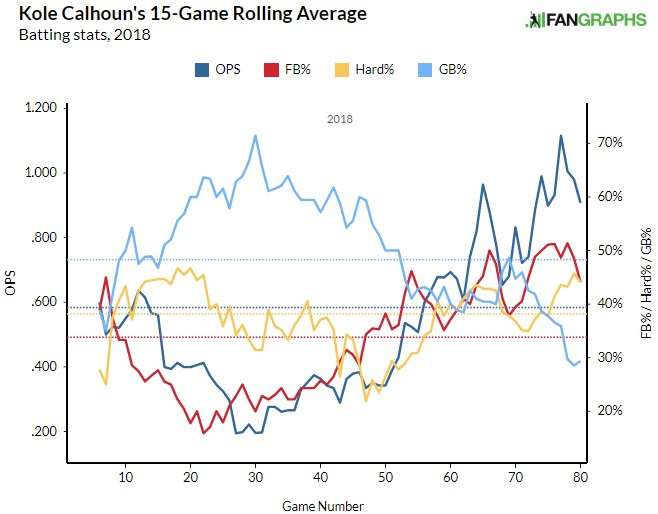 Kole Calhoun, you see, had been hustling. He used his time on the disabled list to tweak his mechanics and get more loft on the ball (while delicately tending to his injured oblique, no doubt). You might have heard some hubbub about this “launch angle revolution” business. Well, it seems that Mr. Calhoun wanted to join the club.

Looking at the above chart, you can see that Calhoun was beating the ball into the ground early on in the season. Not only was he hitting far too many grounders, he wasn’t hitting the ball with authority. His hard contact rate was well below league average. I suppose that’s how you wind up with a wRC+ of 4.

His fly ball rates in April and May were 25% and 31%, respectively. Cut to June and his FB% skyrockets to 43%, with a 16% jump in hard contact from May to June. His swing is noticeably different, and so are his results. Kole Calhoun has always been a pretty mediocre player, even in his best years. This could be a whole new player. His strikeout rate has spiked with this new swing, so there could be some batting average volatility. That said, he could be a real difference maker over the second half of the season in the power department, and I’d be looking to grab Calhoun in all leagues 12 teams or deeper.

Trea Turner has always been known for his hustle. His entire fantasy value is predicated upon it. He even was the recent recipient of the Nationals “Heart and Hustle” Award…an award which was ironically bestowed upon him mere hours after Turner was chastised for not running out a bunt. He was benched for his actions – or inactions, as it were – the very next game.

Perhaps even more importantly than that is his lack of hustle on the basepaths in July. We’re creeping up on the end of the month and Trea Turner has exactly zero stolen bases in four attempts over 20 games. This guy was a first round pick in many leagues for his elite base stealing prowess. Just a season ago he swiped 46 bases over 98 games. That’s an uber-elite 76 steal pace over a full 162-game season. Wrap that in with a dash of power and a good batting average atop a strong Nationals lineup, and you’ve got yourself a no-doubt first rounder, right?

Well, things haven’t gone according to plan in Washington. The Nats are merely 18th in the league in wOBA. To compound that matter, Turner isn’t even etched in stone as the leadoff batter to utilize that speed. In fact, he has been relegated to the 6, 7, or 8 spot six times in 20 games in July. That’s a lot fewer plate appearances, and fewer opportunities to steal.

Under the hood, there doesn’t seem to be anything necessarily wrong with Trea Turner the hitter. Despite a league average 33% hard contact rate and elite foot speed, Turner has been saddled with a .304 BABIP that is .031 points below his career mark of .335. He has run into a pop-up issue this year at 14%, which is a BABIP killer. As long as he turns that around, there is absolutely no reason he can’t maintain a .330+ BABIP moving forward. Or is there?

Trea Turner has become progressively more fly-ball happy as the season has worn on, and his hard contact rate has declined at the same time. The OPS has understandably followed. We learned back in the Sabermetric Series this offseason that the soft hit fly ball is a great way to make an easy out. Soft and medium hit fly balls and pop-ups are death to BABIP’s. Turner has suddenly become pretty good at hitting both of them. We don’t need fly balls, Trea, we need you to hit the ball on the ground and run to first so you can steal second.

Stolen bases tend to come in spurts. It hurts his opportunities hitting lower in the lineup, however, when men are potentially already on base as well. I don’t have an explanation for why his SB% is down from 84% for his career to 76% this year. Perhaps he’s dealing with an injury we don’t know about. Maybe it’s just a few bad jumps. Unfortunately, it’s hard to say things are going to turn right around. This has been a season-long trend for Trea Turner. To fairly value him moving forward, we have to think of him more along the lines of a rich man’s Whit Merrifield than a surefire first-round pick. That’s still plenty valuable, but not an elite option.

9 Position Battles To Watch For in 2018 Fantasy Football