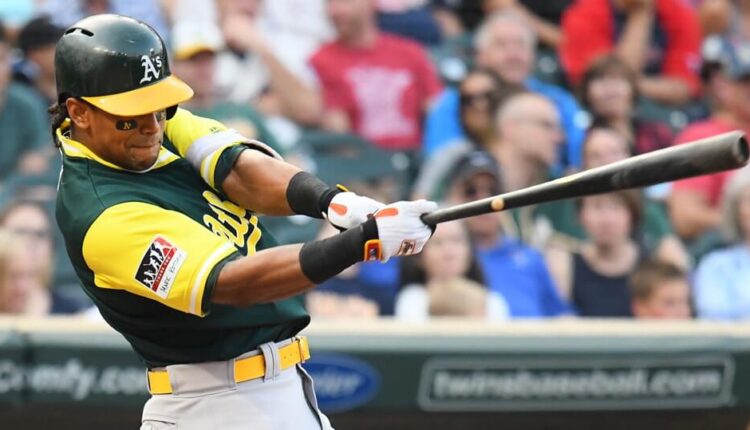 Khris Davis left fantasy owners extremely disappointed in 2019. With an average pick of 46.49, it is easy to classify the 2019 version of Davis as a bust. After a monster season in 2018 where Davis led the league in home runs with 48, the 2019 version of Davis had a major loss of power. This left many Fantasy owners wondering what happened to Khris Davis? I want to provide readers with those answers.

Before looking at what went wrong, let’s look at his stat line. Last season, Davis played in 133 games, accruing 533 plate appearances. He hit 23 home runs, with 61 runs, 73 RBIs, and zero stolen bases. He produced a slash line of .220/.293/.387, which were all three the lowest of his career. None of these statistics justified the draft price that owners paid for him before the 2019 season. Let’s dive in and see how Davis has performed and what happened last season.

The Khris Davis We Knew

Unfortunately, 2019 was not a kind season for Khris Davis or the fantasy owners who invested a third or fourth-round pick. Davis hit .220 with only 23 home runs for the season. The good news is that he looked like his usual self during the first month of the season. Davis hit ten home runs through March and April.

What caused Khris Davis to lose his power? During an interleague game on May 5th where Davis was unable to DH, he injured his hip against the wall while making a terrific catch. He would eventually go on the 10-day injured list on May 24th (retroactive to May 22nd) with the hip contusion, only to be hit on his left hand by a pitch roughly a month later that further sapped his power. Two flukes derailed the slugger’s potential in 2019, but have little bearing on his 2020 outlook.

Both injuries affected the way he swung the bat and his ability to lift the ball, leading to a loss in power. He was quoted in the San Francisco Chronicle talking about the hand injury hampering his power: “It’s just not as strong as it should be. I’ve been choking up a little, and that’s been helping a little, but not many power guys choke up.” The hand injury decimated his power and ability to lift the ball.

One of the first things that I noticed when looking at Khris Davis’s hitting profile was his hard-hit rate dropped significantly from 2018-2019. Looking at it month-to-month, you can see the drop off after this hand injury.

Surprisingly, the hip injury suffered in early May did not have much of an effect, but the sample size was small due to the lack of games he played in May. You can see the decline in the chart above when he returned from the Injured List in June. Then, after the hand injury in late June, that number dropped significantly. 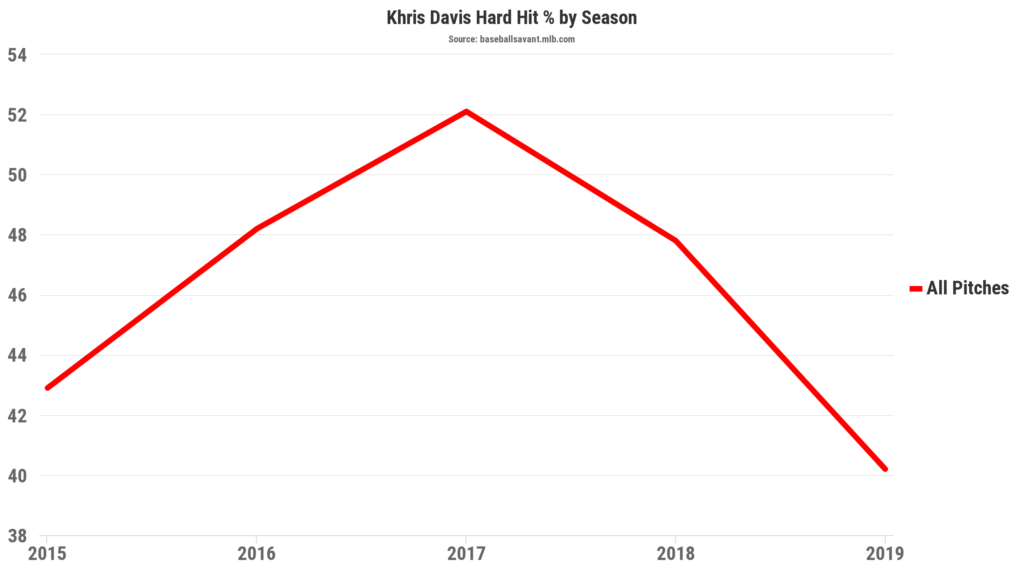 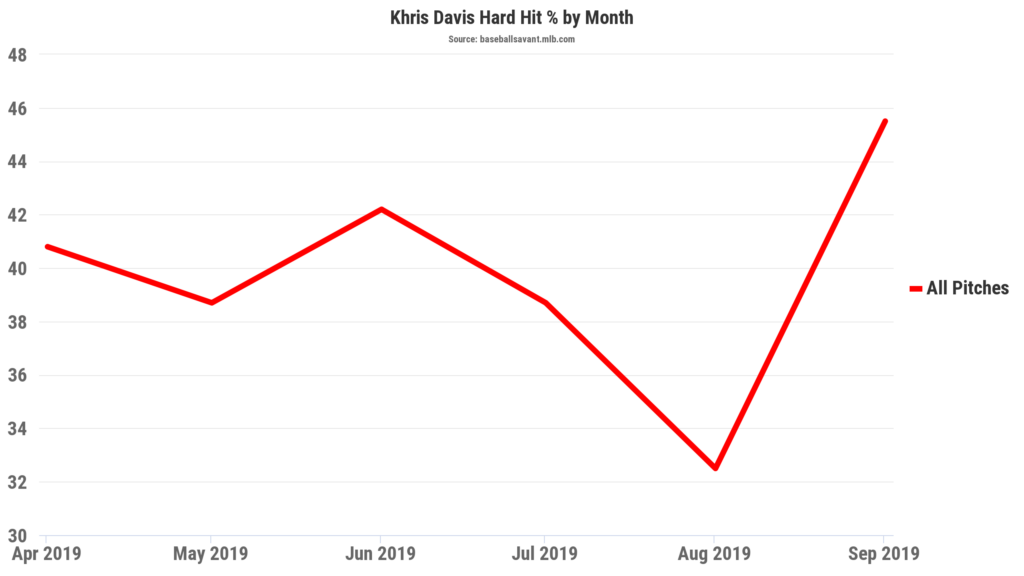 You can see in the chart below how his launch angle dropped severely from 2018 to 2019. The injury also factored into his exit velocity, hard-hit percentage, and barrel rate. It is also vital to note Davis’s correlation between exit velocity and launch angle. 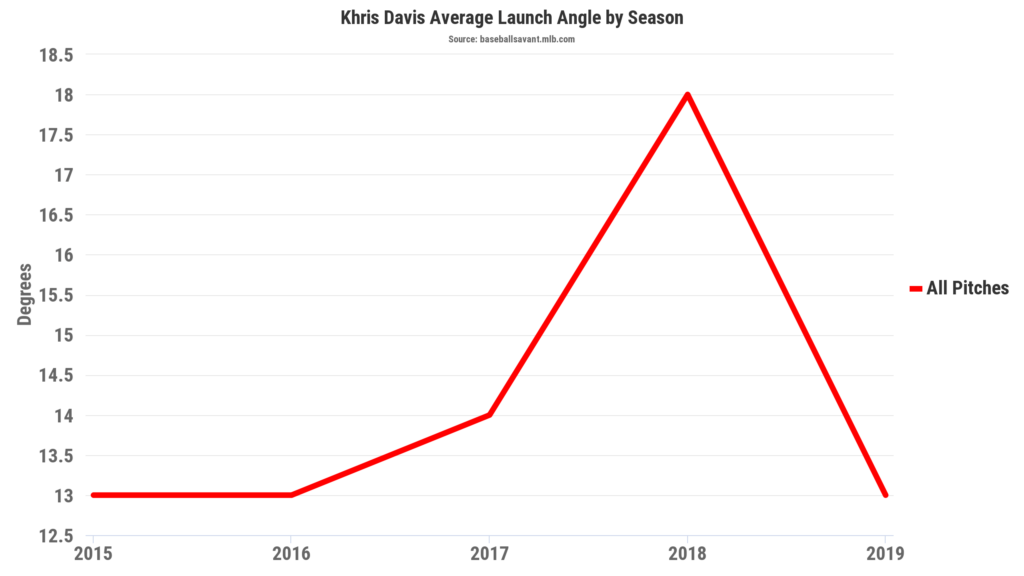 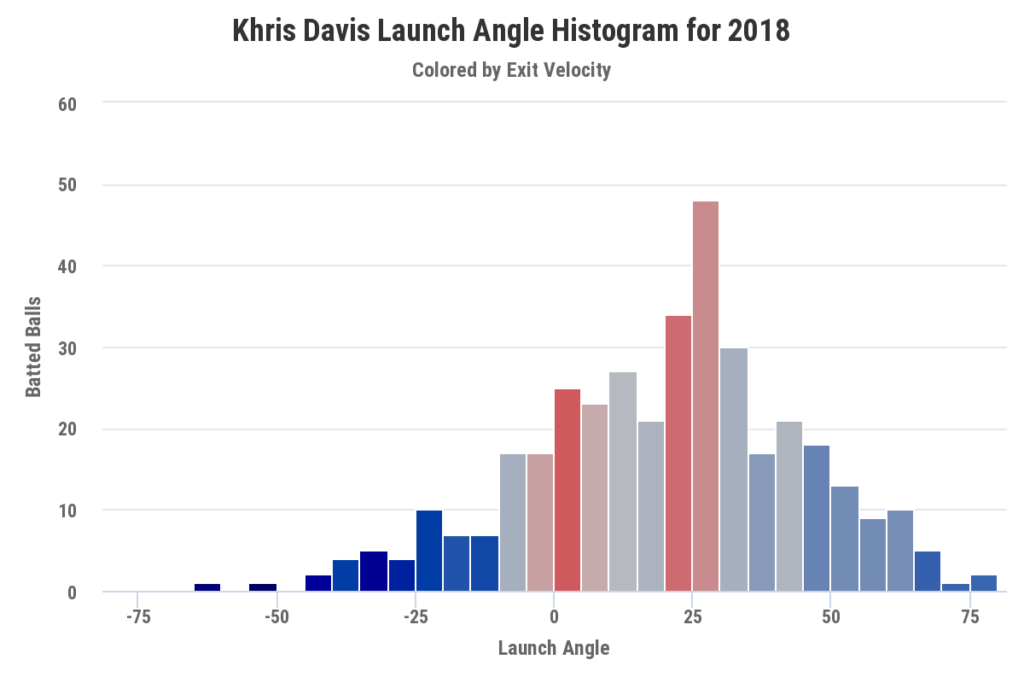 Jump forward to 2019, and Davis had an exit velocity of 89.8 mph on balls hit between 25 and 30 degrees. The drop in exit velocity led to a decline in home runs. His inability to lift the ball at an optimal launch angle also played into his struggles. His injuries played into this and was a big reason that he faltered down the stretch.

Davis took a step back in most categories, but the numbers were not drastic steps backward. Davis’s swing percentage of pitches outside of the zone rose by nearly three percentage points from 2018 to 2019. The good news is that his contact numbers did not regress much. There are minor concerns, but being healthy in 2020 should lead to better discipline at the plate.

Looking at the weighted averages on the chart’s far-right side, Davis’s 2019 was far below his career average. His wRC was almost half of what he produced in 2017 and 2018. Davis’s wRAA also dropped incredibly hard to a negative 14.3. wRAA measures how many runs a player contributes, with zero being league average. His wOBA also dropped far below his career-worst. Those numbers are concerning, but again, injuries played a significant factor.

His home/road splits also dramatically changed in 2019. Davis was not very good away from home in 2018. In 2019, Davis was much better away from Oakland. These observations are interesting to see as 2019 was a weird season for Davis. However, if he can somehow manage to put it all together, we could see a very valuable hitter.

Khris Davis is one of my favorite players to take in drafts. Going at an average pick of 159.87 on Fantrax makes him a great value. 2018 seems like a distant memory when Davis hit 48 home runs and led the league by five. I don’t think he just forgot how to hit a baseball in 2019. The injuries affected him in a big way.

Davis should return to form this season and hit 40 home runs over a full-season-pace. In a shortened 60 game season, Davis is the type of player who could lead the league in home runs. At his current ADP, he is a great pick to add power to your fantasy team.

His batting average should rise closer to the .247 that he traditionally posts while being a great contributor for RBIs. Drafters should have no fear of taking “Krush” Davis at his ADP. His 2019 season is now in the past, and it is time for Davis to return to form in 2020. Drafting Davis is a low-risk pick, with a high chance of a positive return on investment.