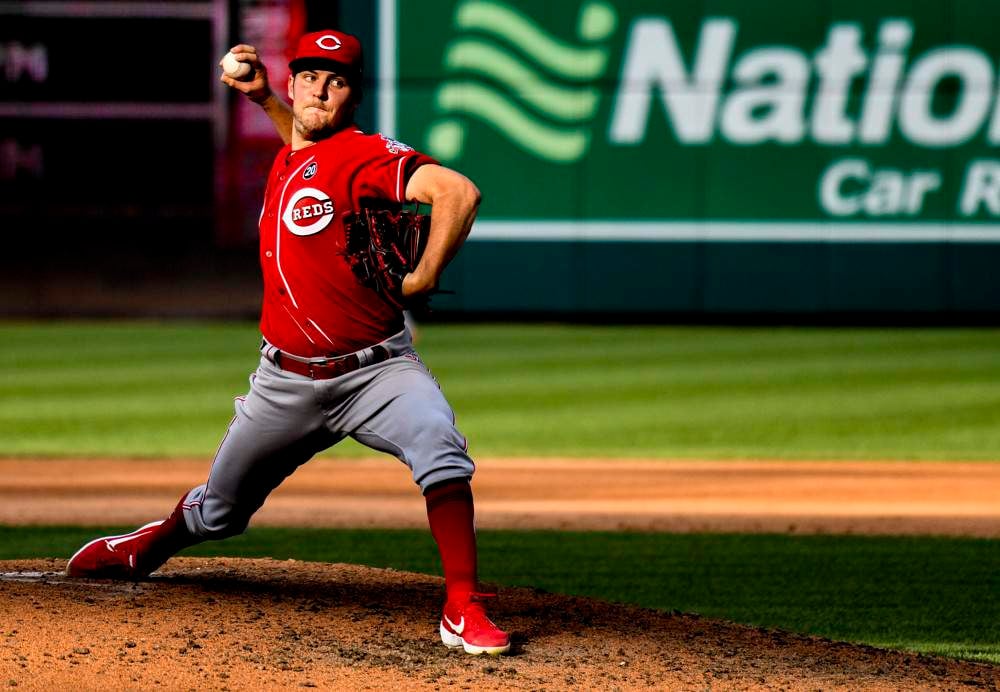 Earlier in this marathon of an offseason, I wrote a piece outlining a predictive version of my StuffERA metric. I looked back to its post-2018 projections and the model accurately predicted six of the top ten pitchers by ERA in 2019. Today I want to try to use the model to cover several pitchers who could be great buys to bounce back in a big way in 2020. 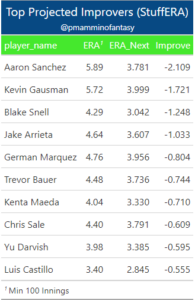 Above is a chart of 10 pitchers who the model projects to improve significantly in 2020. To qualify for the list, each pitcher needed to throw at least 100 innings in 2019 and have a Predicted StuffERA projection below 4.00.

Sanchez had a promising early career with the Blue Jays but some injuries and poor luck have caused his career to falter. He currently is not on a team but is a guy to keep an eye out on. The model is a big fan of a bounce-back to a high 3 ERA. It viewed his 2019 as fairly unlucky.

I will NEVER be able to quit dreaming on Gausman. His numbers may be a bit clouded by his exceptional relief stretch late in 2019. However, after signing with San Francisco he should have a ton of chances to start and should be a great bet for 2020. I was already all-in on him but looking over the numbers of my model I love him even more. He has a truly dominant splitter and is showing signs of finally reaching his immense potential.

There are still some injury concerns with Snell and his potentially wonky elbow. He was incredible in 2018 winning the AL CY Young award. He struggled through an injury-filled 2019 but the model thinks he will bounceback in 2020. If healthy he has the potential to bounceback to CY Young levels.

One of the issues with using career numbers in a predictive model is that it may be slow to realize a pitcher is in decline. Arrieta is that kind of pitcher. StuffERA still views the Phillies right-hander as an above-average pitcher despite him getting rocked in 2019. However, he is not that far removed from a sub-4 ERA and as a result, he may be a solid buy at his current price.

Marquez is a darling of the fantasy community as many of us would love to see what he can do if he manages to get out of Colorado. The right-hander has nasty stuff and the model loves him. However, unfortunately, StuffERA currently does not include any park adjustments. Marquez’s StuffERA does not look great, but the In_wOBA outline may be penalizing him for pitching in Coors. He may be the example that forces me to evaluate park impact as well.

Bauer is a controversial personality and player. Those who believe in his talent see him as a top-five pitcher, others seem him as one of the worst pitchers in baseball (some hyperbole). His 2019 was one of the most up and down campaigns I have ever seen and it ended with him being sent to Cincinnati. The model thinks he is an above-average pitcher and thinks that his 2020 season will be a bounceback one.

I LOVE Kenta Maeda. Like, love the guy. One of my favorite fantasy buys ever. His Dodgers tenure has been extremely underrated. He is quite possibly the most under-appreciated pitcher in all of baseball. The model loves him. Among pitchers with 100 innings in 2019, he projects to have the 14th best Predictive StuffERA. The move to Minnesota can only help him get a chance to pitch a full season in the rotation. His price is rising but I will love him at whatever price.

INJURED WILL NOT PITCH IN 2020

Darvish is another pitcher with an extremely volatile 2019 season. His early-season numbers were brutal but he saved the season with a dominant finish. Early season command was what was doing him in early in the season but he improved significantly as the year went on. The model is buying in projecting a top 20 ERA for him in 2020.

Castillo fascinates me. StuffERA loves him and projects him to lead all of baseball in ERA. In 2019 Castillo took a big step forward increasing his K numbers significantly. So far in his career, he seems to have some positive influence on wOBA but he has never seemed to take that true full step to stardom. I think that 2020 may be that year and while I was previously out on Castillo, StuffERA has made me re-evaluate and buy back in.

This is just a sampling of 10 pitchers the model likes better than their 2019 results indicated and this works as a list of players I’m willing to buy into at their current prices in any upcoming drafts. The shortened season may make it hard to evaluate the success of this list at the end of the season but I am excited to see StuffERA in his first season.