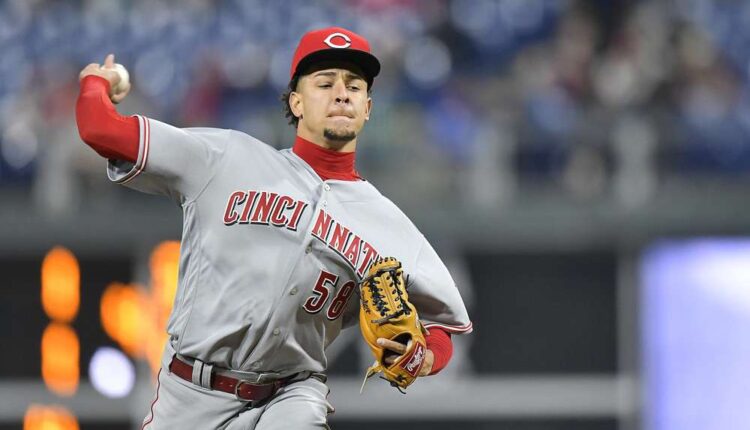 A few weeks ago I introduced a new ERA estimator, StuffERA. The new metric looks at a given pitcher’s ability to influence four separate events and evaluates how he attacks hitters based on expected responses to location and pitch type. As I highlighted in my introductory article, the metric does a better job of describing what happened in a given season than FIP. Overall the main issue I had with the metric was that it failed to match FIP when looking to the next season. My goal was to find a metric that uses similar inputs to better predict the future.

Why Wasn’t It Predictive

Whenever I create a metric that does extremely well as a descriptive measure my next step is to evaluate the Predictability of that same metric. With Stuff-ERA, I quickly realized that the metric held little to no predictive power. The main reason the metric falls short is the dependence on a single season’s worth of In_wOBA. In_wOBA is a measure of a pitcher’s contact quality control. While some pitchers are able to successfully limit bad contact across multiple seasons, it is extremely noisy year to year. While the other metrics contained within my original StuffERA metric, have year over year correlations north of 0.6, In_wOBA come in below 0.1.

This made it extremely difficult to use a single season’s worth of data to try to predict the next season. I quickly realized that I would need to perform some sort of regression to the mean.

I wanted to use some form of mean regression that still allowed me to credit pitchers for what they have done across their careers. Initially, to try to account for pitcher talent, I took each of the pitchers within my sample and determined a weighted mean In_wOBA that used the number of pitches in a season as the weights. While this greatly improved the predictability of the metric, I realized that it still favored pitchers who have had only one or two outlier seasons, like Dakota Hudson and Brad Keller. I decided I needed some deadening of these extreme values.

I knew that in order to regress these values I wanted to include some number of innings with a neutral in_wOBA. Deciding on what number of innings to use was the difficult part. I know that for a normal starter within my sample (120+ innings), they tended to throw somewhere between 2000-3000 pitches. So working with 3000 as a baseline I worked in increments of 500 pitches until I found a point where the R^2 of my model was maximized. This point happened to be at 5000 pitches. So to my weighted average, I added a “season” of 5000 pitches with an In_wOBA value of 0. Even with this regression, Brad Keller has the best Average value in the sample, followed by Clayton Kershaw and ake Arrieta.

Using my newly generated regressed In-wOBA value, I fit a model on all of the seasonal pairs on 120 innings in consecutive seasons, using the previous season’s results to predict the next season ERA. The model had an R-Squared value of 0.3. While this is not a perfect model, there are a number of extremely valuable insights we can draw from the results. The inputs for the new model are the same as the original StuffERA model, however, I have removed OOZ as it was not considered significant and In_wOBA has been replaced by the Average metric I have already described. Similarly to how I did in the first introduction article, I have included a chart comparing it to FIP across different innings minimums. 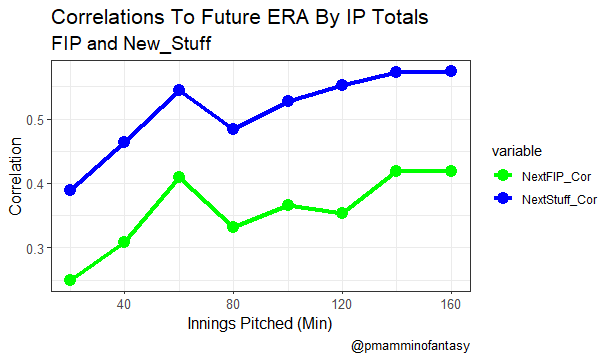 As you can see at each of the different levels of innings minimums I compared, Predictive StuffERA has a much stronger correlation with next season ERA than FIP. Again this is not surprising as my metric was built to predict next season ERA while FIP was not. However, as FIP is a commonly used metric to help find breakout or improvement candidates, my metric provides us with a powerful tool to use as an improvement.

In order to grasp the impact of the metric and its utility lets take a look at the top pitchers from 2018 (predicting 2019). Below are the top ten pitchers who threw at least 120 innings in 2018. Think of this as a prediction of the top ten in 2019 ERA.

While there are some major misses, Keller and Kluber are the biggest examples, this metric was able to accurately predict six of the ten best pitchers based on ERA in 2019. While the order was not 100% accurate just identifying pitchers like Gray and Flaherty who took big jumps from 2018-2019 is an extremely valuable tool.

So from our quick look back on 2018/2019, we were able to see the immense value that my metric can bring about. The biggest question is can it repeat it’s success in 2020. Whenever this season does occur, I will be looking to it to help me guide my draft decisions. I realized in building this that many of my favorite sleepers and late-round picks were players this metric hates. It’s giving me a new look at things and while a few of the players do overlap in my upcoming drafts I will be targeting a whole different set of pitchers.

I added five more names to this list because I wanted to highlight some of the breakouts the model is buying into. Lynn and Giolito were two of the biggest surprises in 2019 and Pred StuffERA loves the gains they made. It sees both guys are top-end options in terms of ERA in 2020. A new ballpark may be a huge help for Lynn making him even better than his incredible 2019 season. Giolito may be truly taking that next step to stardom and I was not a buyer going into this process.

Kenta Maeda is among the most underappreciated pitchers in all of baseball. The guy is an absolute stud and a steal in fantasy drafts. Dakota Hudson has been incredibly successful over the last two seasons with a low strikeout approached buoyed by contact suppression. FIP and other estimators are not a fan of his work but the young Cardinal is a favorite of Pred StuffERA. While I am not excited to buy in I will likely own a few shares based on this new information.

On the flip-side, I have been a staunch proponent of Jordan Lyles this offseason. I love the improvements he made and think he is in for a big season. However, Pred StuffERA is not a fan. It sees him having the 10th worst ERA in the sample. Some notable names behind him include Masahiro Tanaka, Rick Porcello, and Michael Pineda. Pineda has long been a FIP favorite despite showing poor contact control stats. He is the type of pitcher I would hope my model would identify as a potential liability.

Overall I think I have stumbled onto something extremely powerful and I will be using it early in the season to try to find some pitchers in-season who can pay dividends for their fantasy managers. In a shortened season, acting quickly on the wire will be the key to success.