German Marquez the Rockies Ace – Can He Beat Coors Field? 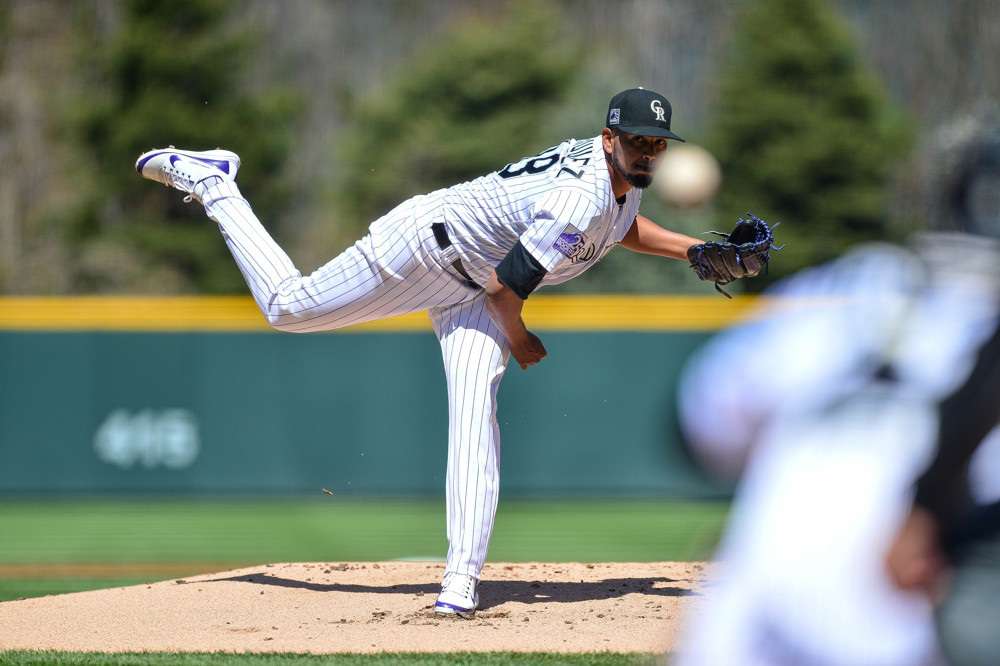 Can we ever trust a Rockies starting pitcher, especially in Coors Field? More often than not, the answer is no, but one of the more intriguing pitchers to consider is German Marquez. After a breakout season in 2018, Marquez came back to earth in terms of his ERA and home run rate. However, in the smaller 2020 sample, he performed well, especially away from Coors Field, which showed up in his lowered ERA. As always, we dive into what happened in 2020, the batted ball profile, and plate discipline. We’ll also look at the pitch mix and results for the German Marquez. With that said, let’s dive in.

German Marquez and His Battle with Coors

One other statistic to note in 2018-2020 includes the home run rate for German Marquez, the Rockies Ace. In the 2020 season, Marquez finished a career-low 0.66 HR/9 and 9.4% HR/FB rate. The lowered home run rate is possibly reflected in the lowered ERA even with the decreased strikeout rate. Overall, German Marquez, the Rockies Ace, dominated in 2020 outside of two starts where he gave up 15 total earned runs. In his other 11 appearances, he only gave up 34 earned runs with eight appearances where he allowed zero home runs with nine quality starts. We mention this since Coors Field is a tough place to pitch in.

Marquez holds a career 29.4% fly-ball rate and a 22.6% line drive rate that falls close to his numbers over the past three seasons. The table below shows some trends in terms of the ground ball and fly ball rates. Assuming it continues to trend this way, these gradual changes potentially have implications for his home run rate.

In terms of plate discipline, German Marquez, the Rockies Ace, ended with consistent numbers across the board. Overall just small percentage differences when comparing his 2018, 2019, and 2020 seasons. One notable change included his zone swing rate. Marquez finished with a 70.3% Z-Swing% compared to 65.1% in 2018 and 67.5% in 2019. The table below shows the consistent plate discipline metrics for Marquez over the past three seasons.

Generally speaking, it’s tough to pitch at Coors Field, especially with the deep outfield dimensions and high altitude. In 2020, German Marquez, the Rockies ace, dominated away from Coors with a 2.06 ERA in 43.2 innings. However, at Coors Field, Marquez logged a 5.68 ERA in 38 innings. Granted that it’s a small sample, but Marquez reached career bests in ERA in 2020 away from Coors Field.

The table above shows the breakdown of his home and away splits over the past three seasons. We notice drastic differences in his ERA and WHIP even when the walks remain relatively similar. With the massive WHIP differences, that means Marquez gives up a ton of extra hits at home. When looking at the FantasyPros MLB Park Factors, Coors Field ranks first in runs, singles, doubles, and triples, and second in home runs. Unsurprisingly, we typically see more offense at Coors Field, which hurts German Marquez, the Rockies Ace.

German Marquez uses a four-pitch mix with a four-seam fastball, curveball, slider, and sinker. He occasionally sprinkles in a changeup, but it typically only reaches usage of 5-8%. Marquez’s breaking pitches in the curve and slider performed well repeatedly over the past three years. Before we dive into the results against each pitch, the velocity ticked up slightly on all of his top four pitches. The table below shows the velocity and usage of each pitch.

We notice that German Marquez, the Rockies ace used his four-seamer significantly more in 2018, where he had his breakout season. In 2019 and 2020, Marquez lowered his four-seamer usage and gradually increased the curveball and slider usage. Sometimes if pitchers use their best pitches more often, then positive outcomes follow. With Marquez displaying a deep arsenal, it helps to have multiple quality pitches at his disposal. However, Coors Field proves unbeaten, and maybe one day, he ends up on another team.

Now that we discussed the pitch mix, we dig into the results against each pitch. Generally speaking, hitters crush his four-seam fastball. However, his curveball and slider result in a ton of whiffs with a low batting average, slugging, and wOBA. Similar to the four-seamers, the results on his sinker finished similarly but slightly worse. The table below shows the results of each pitch over the past three seasons.

Hitters crushed the slider in 2019, and that likely contributed to the negatively inflated results that season. When comparing 2018 and 2020, the results on the slider in 2019 negatively appear like the outlier. In terms of swinging-strike and whiff rate, his curveball and slider consistently missed a ton of bats.

So, what should we expect moving forward for the German Marquez? In terms of reasons for optimism, Marquez commands his pitches and generally displays above-average control with a career 2.44 BB/9. Over the past three years, Marquez’s 2.33 BB/9 ranks near a 2.28 BB/9 for Noah Syndergaard and 2.39 BB/9 for Gerrit Cole. I think Marquez falls closer to Syndergaard than Cole, but Coors Field impacts the success of Marquez.

As mentioned earlier, Marquez holds a deep arsenal with a four-pitch mix, including two nasty breaking pitches. After the 2018 career season, he lowered the four-seam fastball usage and slightly increased the use of the breaking pitches and sinkers.

Reasons for Concern – Coors Field, struggles with the four-seamer and sinker, Coors Field, high HR/FB outside of 2020, lowered strikeout rate

Coors Field is unbeaten for pitchers, as it’s hard to limit hits and runs given the ballpark dimensions and high altitude. Before 2020, German Marquez, the Rockies ace, gave up a high home run rate. Although he limits the walks, Marquez allows a ton of hits at home, which impacts his WHIP at home. Even with two nasty breaking pitches, his strikeout rate dropped to 8.04 K/9, which ranked as his lowest K/9 in the past three years.

The German Marquez love baffles me.

Until he leaves Coors, he's not an SP3 IMO which is how he's being drafted.#FantasyBaseball

When combining the 2Early Mocks with the Fantrax mock draft, German Marquez had a 163.4 ADP as the 47th starting pitcher drafted. According to FantasyPros, in 2020, Marquez had a 179 NFBC ADP and a 181.4 combined ADP. If you can land Marquez in the SP45-SP50 range, then that’s a value pick with the built-in risks. Fellow FantraxHQ writer Jake Devereaux ranks Marquez as SP50 in his most recent Top 100 Starting Pitcher Rankings. In the mock drafts, he even went behind Marco Gonzales, Pablo Lopez, and Kevin Gausman. Although I love all three of those starting pitchers, especially Lopez, Marquez holds the highest upside of all of them. However, it’s safe to avoid Marquez with the Coors Field concerns and lower strikeout rates.