Fire & Ice: Switching From A Belt To Suspenders 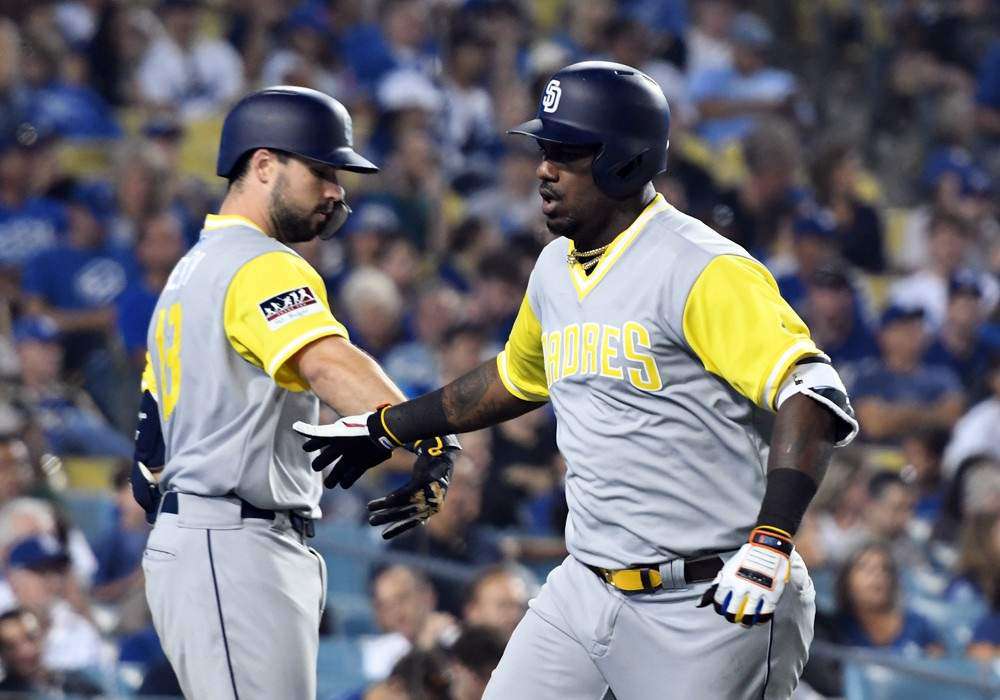 We’re almost through the MLB season at this point, with just a few scant weeks left to go. Kudos to you if you’re still in the championship hunt! Also kudos to you for sticking with fantasy baseball at this point in the year while some other sport clamors for your attention. Kudos all around. Anyway, with that in mind, we’re going to have one eye on what remains of 2018 and another eye towards 2019 value. What do we do with our third eye? Open it, and find a higher level of fantasy consciousness. Dang, that got deep real quick.

Not only does Franmil Reyes have a super fun first name, he’s been super fun to own recently. Over 86 plate appearances in the last month-plus, Franmil has slashed .316/.372/.696/1.068 with nine taters. “Pish posh,” I can hear you say. “This is a healthy dose of balderdash, I must say! This is a 23-year-old without much pedigree! Well, I never!” Settle down, you stuffy British man who is almost certainly named Sir Geoffrey Wigglewattle the Round. Settle down, I say!

Reyes began his season innocuously enough, trying his hand at Triple-A for the first time at the tender age of 22. He didn’t command a lot of notoriety as a one-dimensional bat in a stacked Padres system. He flew well under the radar, with the Padres heading into the season well stocked in the outfield already. Flashier names like Manny Margot and Hunter Renfroe were on fantasy owners tongues long before Reyes came along.

While we were chasing those other outfielders, Reyes was tearing up Triple-A. In total, he would post a .443 wOBA at El Paso over a couple stints, bashing 16 homers with a 14.8% walk rate and 23.6% strikeouts. He earned a call-up in May, but he would only stick around for a little over a month before getting sent back down for more seasoning. A little extra cayenne, perhaps. Spicy. Mmmm. In his first stint with the Padres, he would hit just .228/.260/.457 with a 4.2% BB% and 40.6% K%. He homered six times for a .228 ISO, but clearly, the bat needed more work.

He endured more struggles upon his second stint in July, but it has been since his last recall on August 4 that he has really begun to tickle our fantasy fancy. Not only has he posted the aforementioned 1.068 OPS, he is walking 8.1% of the time and striking out half as often as he was earlier in the year, at 23.3%. Are we witnessing another talented young hitter turn the corner?

Much of this turnaround can be attributed to an improved approach at the plate. I’ve mentioned his walk and strikeout rates, and here we see a major part of what has played into that. 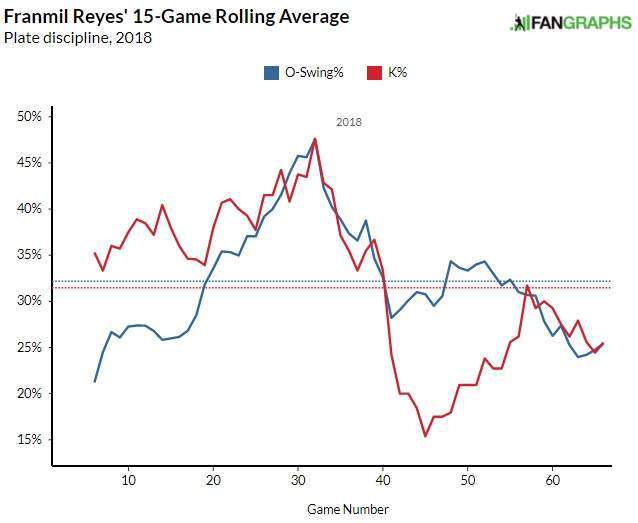 Franmil Reyes is a young, aggressive hitter. That said, in the minor leagues he had shown the ability to take a walk and not post egregious strikeout rates. Of course, nothing can adequately prepare you for major league pitching. Reyes came up and whiffed like crazy, chasing awful pitches out of the strike zone. However, over this most recent stint, we can see that he is laying off bad pitches so he can punish the meatballs.

Reyes still has a way to go to be a complete hitter. He crushes left-handed pitching to the tune of a 1.116 OPS. Against righties, that number tumbles to .758, with a 10% lower hard contact rate at 38%. Only more reps can help him improve against same-sided pitching, so hopefully, the ever-rebuilding Padres give him ample opportunity to do so. His improvements have me looking to add him for the duration of the season. In dynasty formats, I’m looking to buy as well, happily pointing out his 30%+ strikeout rate on the season to potential sellers.

Nary will you find a more bipolar season than the one Brandon Belt has posted. You could even argue that he began his season on fire, only to go ice cold. Something about that seems familiar. Yes, Belt was delivering well on his late-round ADP. Through the first two months of the season, Belt was hitting .309/.404/.550/.954 with 11 homers. His owners were living the high life without even cracking open a Miller Lite.

Of course, this wouldn’t be a proper Fire & Ice article if things didn’t all come crashing down. Well, did they ever. Belt missed the first two weeks of June with appendicitis. Since his return on the 16th, Belt has played 52 games and seen 210 plate appearances. He has hit just .211/.286/.305 sans appendix, so perhaps said appendix contained some sort of magical baseball properties. Outside of settling on that as the answer, let’s look at what else may have happened.

It’s not only his ability to hit for average that has vanished, his power is gone as well. Let’s look at his April-May batted ball data versus his time post-appendicitis.

This is a terrific way to not hit for power. While Belt has continued to hit plenty of balls in the air, his pull rate has tanked. He’s not smoking as many balls as a result, and you can see for yourself what that has done for his HR/FB rate. It’s already hard enough to hit for power at AT&T Stadium, but it’s even harder with this batted ball profile.

Belt’s hard contact rate has been especially poor in August, at a meager 21.6%. He spent some time again on the disabled list (story of his career) with a hyperextended right knee, and it’s been a disaster since his return. Even with first base as bad as it’s been this year, it’s impossible to roll with Belt at this point in redraft leagues. Bake in some lack of ceiling, add a dash of low floor, and sprinkle in some checkered injury history, and you’ve got a recipe for “stay away” in dynasty. It’s time to switch to suspenders.