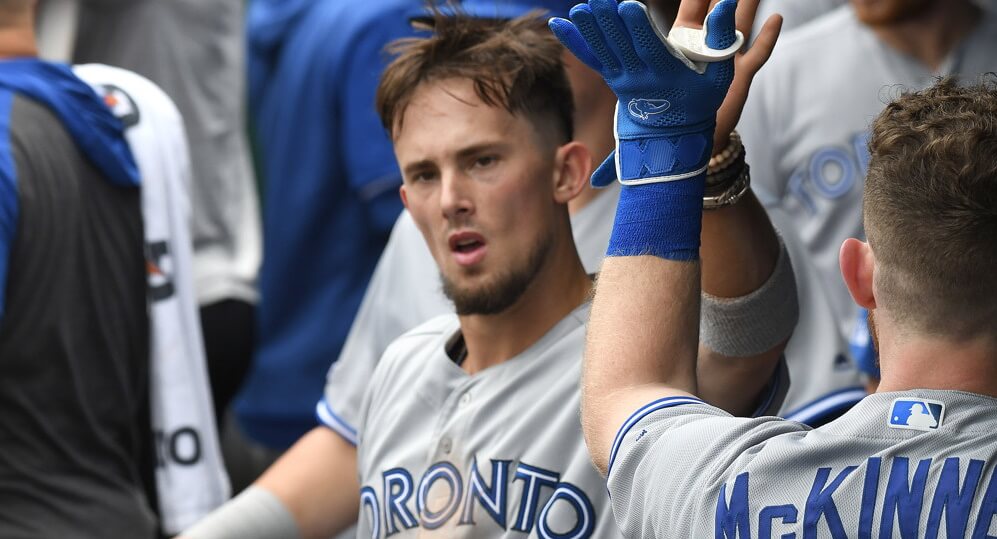 Sticking with the hitting this week, we have a pair of former prospect darlings. One may have come through the minor league system a bit longer ago than the other, but they are only separated in age by three years. Jorge Soler has had a terrific fantasy season, while Cavan Biggio has failed to live up to his potential. Let’s dive into this week’s Fire & Ice.

We all have them when we play dynasty leagues. Our woobies. Our babies. Our sexy little draft picks we think about before we go to bed at night. Those sneaky little prizes we think will overcome all odds and turn into superstars. Well, I’ve been playing dynasty leagues long enough to remember when my league mates told me as much about Jorge Soler.

A perennial disaster, Jorge Soler is now 27 years old. He is enjoying his longest and most successful season at the big league level. His 112 games has easily surpassed his 101 game sample with the Cubs. His 29 homers make his previous career-high of 12 in 2016 weep like a little school girl. Clearly, Jorge Soler is enjoying his breakout season, but what has fueled his success?

Health, for once, has been a key. Soler debuted in 2014 but has eclipsed 86 games at the highest level just once since then. A multitude of injuries has stunted his growth, seemingly every year. Along with those growing pains have come extreme contact issues. In his 2017 debut season with the Royals, Soler managed just a .144 average over his 35 game sample size, with a 32.7% K%. Things were ugly.

If we had a full version of 2018 Soler, we may have been convinced that he was here to stay. Over 61 games, he posted a .265 average, .202 ISO, and 42.9% Hard%. His .340 BABIP wasn’t even that outlandish for a power hitter. That was just 61 games, of course, as he spent most of the season on the DL with a broken toe. That was so long ago that it was known as the Disabled List! But who cares about then, what is he doing now?

What Jorge Soler is doing now is smashing baseballs. His 29 home runs tie him for ninth in baseball with Eugenio Suarez. How he has got there is even largely sustainable. His 44.3% hard contact rate ranks 33rd in MLB, which is a strong start. While his 45% Pull% and 38.8% FB% are modest, his 9.7% Barrel per Plate Appearance mark ranks 20th in MLB. That bodes very well for his continued power output. In fact, his xwOBA is actually higher than his current .359 mark, at .376.

Perhaps even more notable than Jorge Soler’s expected power output is his contact gain. His current 70.1% contact rate is the best he has posted since his 24 game debut in 2014. He has also posted a career-best 84.5% contact rate on pitches within the strike zone – the balls you need to punish as a power hitter. On top of that, Soler has shown an improved eye at the plate in July. 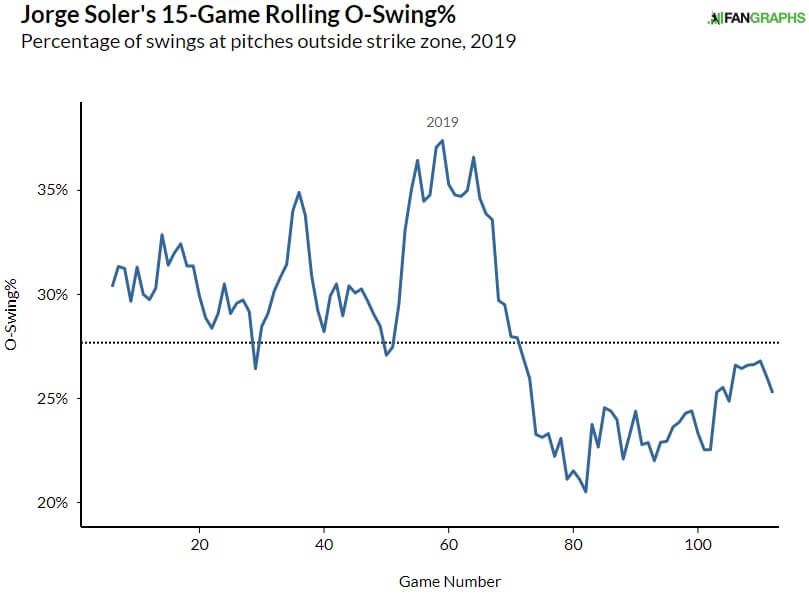 Soler posted a whopping 16.4% BB% in July compared to a 17.3% K%. That strikeout rate would be a huge improvement over his season-long 26.9% mark, but we need to see more sustained contact rate gains before believing in that. In any case, as long as he can stay on the field, it is looking more and more like we can rely on Soler as a source of power and OBP. He can also push 100 RBI on a consistent basis as long as he is the Royals cleanup hitter, which he has been on a consistent basis. It’s taken a while, but Jorge Soler has finally arrived.

Cavan Biggio had one of the most interesting profiles in the minor leagues. As such, I was more than excited to see him called up. Biggio profiles as one of the three-true-outcomes type of batters – to the extreme. To date, Biggio has accrued 239 plate appearances with the Blue Jays. He has nine home runs, a .213 average, and a .343 OBP. Rob Deer, for example, had a career .220 average and .324 OBP. His 12.7% BB% actually pales in comparison to the 16.7% BB% Biggio is putting up.

This obscene walk rate is not just an illusion. In the 2018 minor league season, Biggio walked at a 17.8% clip. This year at Triple-A before his call-up, he walked at a 19.5% rate. If he qualified for the leaderboards, Biggio’s 13.3% O-Swing% would be the best in baseball by a wide margin while his walk rate would rank sixth. Alex Bregman currently leads qualified bats with a 17.6% O-Swing%, while Mike Trout leads MLB with an 18% BB%. Shocker. Biggio’s 35% Swing% would be the fourth-lowest rate in baseball, trailing only Dan Vogelbach, David Fletcher, and (again) Bregman. Biggio is just 24 years old, a rookie, and can already draw a walk as well as anyone in baseball.

What makes Biggio even more interesting is his contact metrics compared to his strikeout rate. He is striking out at a very, very high 28% clip. However, he is making above-average contact at 78.5% as well as whiffing just 7.5% of his swings. Such numbers typically portend a much lower strikeout rate. Matt Carpenter, for example, has a career 83.1% contact rate, 20.7% O-Swing%, and 6.2% swinging-strike rate, along with a career 19.5% K%. It’s not a direct corollary by any means, but what Carpenter has been able to do isn’t out of reach for Biggio. Biggio can also steal you double-digit bases – one thing Carpenter has never done.

Owners in standard roto leagues are probably flummoxed by Cavan Biggio’s lack of batting average. It’s a fair knock, and one he may never fully overcome. He is going to be a much more valuable asset in OBP formats. With a Statcast XBA of .236 and an xwOBA of .348 – well ahead of his current .319 mark – there are clearly plenty of better days ahead. Add in some positional versatility in the outfield and first base, and you have yourself a potential fantasy darling.

Are you onboard with Nathan’s take on Jorge Soler and Cavan Biggio? For more great analysis from Nathan check out his full archive.