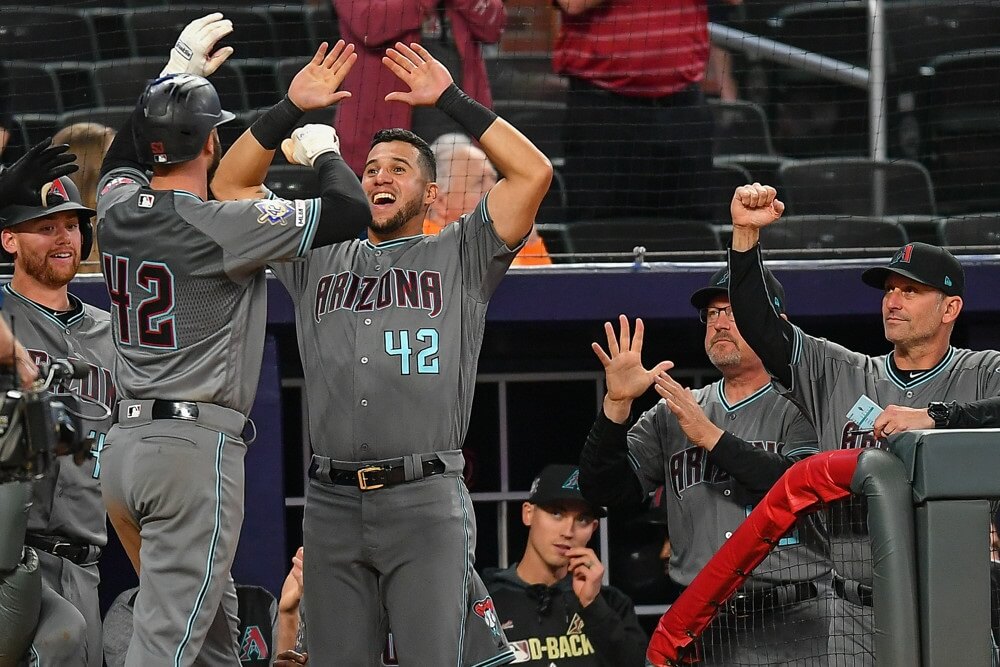 It took everything in my power not to write about Christian Yelich in this week’s Fire section. I have just one share across my multitude of leagues, but he has been a one-man wrecking crew. He has finally embraced the glory of the Fly Ball Revolution (or Air Ball Revolution, Launch Angle Revolution, whatever you want to call it). His launch angle is up from 4.7 degrees last year – when he was already an MVP – to 16.9 degrees to this point in 2019. He was already one of the game’s best hitters, and now he is taking yet another step forward. Enjoy the ride if you own him. It’s gonna be fun.

We’ll start not with Christian Yelich, because he’s already owned everywhere. Rather, let’s discuss one of April’s hottest waiver wire adds, Christian Walker. All he’s done across his first 76 plate appearances is hit .353/.421/.706 with six bombs. He’s even chipped in three steals, despite having the same Statcast sprint speed of 26.6 ft/sec as plodders such as Robbie Grossman and Ryan O’Hearn. I’ll go ahead and squash his 20-steal pace as unsustainable.

What looks very sustainable, however, is his power. He has always possessed huge raw power but hasn’t always had the plate skills to tap into it. We’ll get to that in a moment, but first, let’s just appreciate just how hard he is hitting baseballs right now. Here’s a look at the current top 10 in hard-hit percentage in MLB. While we’re here, let’s check out the average exit velocity leaderboards, shall we?

This one’s a little more of a reach, but guess who ranks in the top 20 of my favorite leaderboard, Barrels per Plate Appearance.

Yeah. That power is real. It’s always been real. Coming into the season, though, the playing time situation wasn’t great. He was slated to see the short side of the first base platoon, with Jake Lamb earning most of the at-bats against righties. Unfortunately for Lamb, he suffered a quad strain and will be sidelined until approximately mid-May. That left first base open for all the at-bats Christian Walker could soak up.

In a practically meaningless small sample, Walker has an obscene .534 wOBA against righties. That’s all of 48 plate appearances, but also the main reason he’s been such a hot pickup. His plate discipline doesn’t back up the early returns, however, with a 6.3% BB% and 41.7% K% against right-handed pitchers. Compare that with the 17.9% BB% and 10.7% K% against lefties and you can see that the Diamondbacks had the right idea to platoon Walker coming into the season.

As a 28-year old with no (or perhaps negative) defensive value, Walker is going to have to hit a ton to continue to contribute every day when Lamb returns. While Walker’s 30.3% K% is acceptable in today’s game if you’re putting up crazy power, you also need to find ways to get on base to offset those strikeouts. Clearly, he’s been able to do that so far, with a .421 OBP. His O-Swing% of 28% is better than it has ever been, and his 46.7% swing% is the lowest of his career. While the improved eye and patience are good to see, it’s not nearly as good as the player I can’t help but think of in comparison – Joey Gallo.

Gallo is in lockstep with Walker in a lot of those leaderboards. He has the prodigious raw power and the strikeout rate. Walker is making contact on just 65.7% of his swings. The only two players to have lower contact rates than that in 2018 were Teoscar Hernandez (64.1%) and Joey Gallo (61.7%). However, where Gallo is extremely contact-adverse, he keeps his OBP above .300 by drawing oodles of walks (13.5% for his career). As a left-handed hitter, Gallo also hits righties better than lefties and isn’t bad enough against lefties to get platooned. Over time, Walker’s immense propensity to strike out against righties probably costs him a full-time gig.

If you can sell Walker as this year’s Jesus Aguilar and turn him into a full-season profit, I wouldn’t hesitate to do so. If you play with some sharp players and can’t sell him, it’s safe to ride him until either the wheels fall off or Jake Lamb returns, whichever comes first.

As a preseason Dude of mine, it pains me greatly to stick Garrett Hampson in the Ice category. His on-base skills and potentially elite stolen base ability had me salivating all preseason. Early injuries to Daniel Murphy and Ryan McMahon ensured Hampson would have a spot to play in April, which alleviated concerns of him getting shipped to Triple-A due to the offensive logjam. Unfortunately, Hampson has done his best to let the opportunity fall through his fingers.

To date, Hampson has hit just .191/.211/.294 for a sickening .215 wOBA. That ranks eighth lowest in baseball, right behind Jose Ramirez at seven, who we analyzed last week. Hampson’s skill set is not quite as robust as Ramirez’s, to say the least. While he has managed to hit his first MLB home run, he is just 1-2 in stolen base attempts over his first 20 games. It’s hard to steal bases when you’re not getting on base!

He wasn’t expected to hit for much power or be a hard contact machine. It’s unsurprising, then, that he has hit for a below-average 27.5% hard contact rate. Where the problem really lies is in his extreme pop-up problem. 41.2% of his fly balls are pop-ups, the highest mark in baseball by a country mile. If you’re wondering how to measure a country mile in pop-up rate, it’s 11.2%, apparently, because second place currently belongs to Erik Gonzalez at 30%. The pop-ups are the primary reason Hampson’s BABIP sits at .245 despite his plus speed (seventh highest sprint speed recorded by Statcast in 2019 at 29.4 ft/sec) and even-spray batted ball profile.

Where Hampson should be able to improve is in his plate discipline. His current 2.8% BB% and 26.4% K% are very un-Hampson like. He controlled the plate very well in the minors, and his underlying metrics indicate improvement is on the way. His 18.6% O-Swing% is extremely low, indicative of a hitter with a much higher walk rate. His 37.8% swing% backs up the patient approach, while his 79.1% contact rate and 7.9% SwStr% let us know he’s making plenty of contact. It’s just not good contact.

Hampson has been a versatile defender for the Rockies, playing 16 games at second, one at shortstop, and four in the outfield. No amount of versatility will make him worth rostering if he doesn’t hit, however. With Daniel Murphy working his way back from his finger injury, Hampson could wind up back at Triple-A in short order. His stolen base upside is huge, but until he can eliminate the pop-up issue and get on base at a higher clip, he can be dropped in standard mixed leagues.

Sample Sizes Are Starting to Matter – Sit Rizzo and Benintendi?