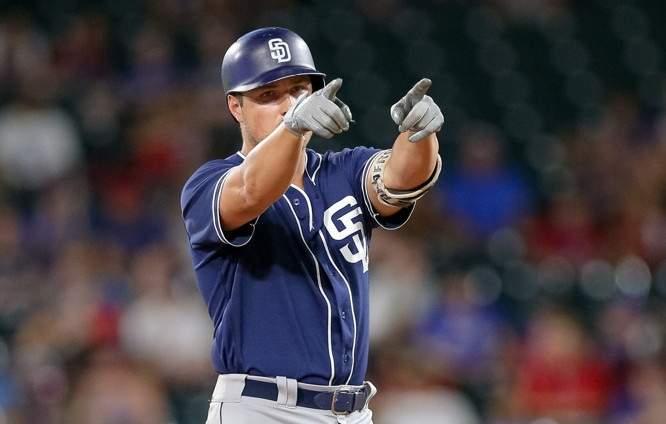 Power’s been easier to find recently, but there’s evidence that the juiced ball had begun to level off. While the league’s average exit velocity on fly balls ticked up half a mile per hour compared to 2017, the average fly ball didn’t travel any farther. Batters hit the ball a little harder, but it wasn’t carrying quite so much. We don’t have any conclusive evidence yet that the ball lost some of its jump, but it’s possible. If that proves to be the case, then power might be more difficult to find than it has been recently. These five players outside the top 100 position players in ADP, though, have the strength to threaten 30-homer seasons regardless of the baseball.

The time is now! Fantasy Baseball leagues are already forming at Fantrax.com, so head on over and start or join a league today.

Renfroe’s hard contact rate took off last season, and he really heated up in the season’s second half. From the All-Star Break onward, Renfroe hit .253/.291/.541 with 19 home runs. More exciting, the Athletic’s Eno Sarris found recently that Petco Park plays better for right-handed power than its reputation suggests. In September, Renfroe finally began to pull hard-hit fly balls consistently. San Diego’s got a crowded outfield and Renfroe’s below-average plate discipline makes him high-risk. That said, a .541 slugging percentage plays, even if Renfroe makes too many outs to be a star. Entering his prime at age-27, Renfroe’s got as good as a shot as anyone outside the top few rounds to threaten 40 bombs.

Palka’s a bit of a Renfroe-light. His swing-and-miss might be fatal, but the juice in the bat is real. Consider the top five hitters last year by peak exit velocity: Giancarlo Stanton, Gary Sanchez, Aaron Judge, Daniel Palka, Carlos Gonzalez. Palka’s got more swing-and-miss in his game than any of the Yankee stars ahead of him, so his floor’s awfully low. He doesn’t steal bases, he’s projected by Steamer to hit .231 and the White Sox are probably going to be a middle-of-the-pack offense. All that notwithstanding, if you’re just looking for power potential, Palka’s up there with the best of them. It’s not a bad find outside the top 300 overall.

Garcia was never going to repeat his BABIP-fueled 2017 All-Star season. Even the most pessimistic of onlookers, though, wouldn’t have expected a .236/.281/.438 line in 2018. Garcia’s production cratered last year; he struck out more than ever and chased as many pitches as always. As he enters his late-20’s, maybe it’s fair to conclude he simply doesn’t have enough of an approach to be a viable big leaguer. At first glance, he appears to have the same problems that plague Renfroe and Palka- subpar pitch recognition leading to too many strikeouts.

Garcia’s the most talented of the three, though. I’ll borrow from Statcast here. Batted balls with a launch angle between 5◦ and 30◦ reflect optimal contact, airborne contact without so much elevation as to be pop-ups or shallow fly balls. That batted ball range can be thought of as something of a “sweet spot.” While the two players above him on this list have below-average “sweet spot” rates, Garcia’s has been above-average over the past four seasons.

Garcia’s viewed as something of a lumbering slugger, but he’s a better athlete than one would think. That athleticism allows him to barrel up a fair amount of pitches despite his swing-at-everything mentality. Nor is he a completely speculative play; Derek Carty’s The Bat projects Garcia for a .270/.328/.453 line that would be an immense value at his current draft position. He’s a health and performance risk, but you can see why the Rays were willing to take one last shot on Garcia. He remains incredibly physically-gifted.

I wanted to include one deep sleeper from each league for respective deep-league AL and NL-only formats.

Chad Pinder has about a full season’s worth of at-bats since the start of 2017. In that time, he’s combined for 28 home runs. Pinder has consistently posted above-average exit velocities and makes a fair amount of airborne contact. A cerebral hitter, Pinder is focused on turning on inside fastballs in 2019, which would only help him hit for more power if he could pull it off. Pinder’s not a guaranteed starter, but his main competition for the left field job in Oakland are Nick Martini, a 28-year-old with one career MLB home run, and Robbie Grossman, who was released by the Twins and signed to a cheap, one-year deal. Worst case scenario, Pinder should bounce around the diamond if he stays healthy.

Christian Walker’s an afterthought in drafts. It’s understandable; he doesn’t have a clear starting job and his MLB track record is rather limited. The out-of-options Walker is someone to monitor, though. Jake Lamb had a terrible 2018 season (punctuated by shoulder surgery), and he’s now trying to acclimate to first base. Lamb’s never hit left-handed pitching, so Walker at least seems to be a likely platoon option early. With Lamb’s uncertainty on both sides of the ball, though, Walker might find himself playing a key role in the desert. While his MLB opportunities have been scarce, he’s absolutely obliterated Triple-A the last two seasons. If Arizona does feel comfortable with Lamb in camp, Walker should find a job somewhere else in short order.

You buying in on any of Anthony’s late sources of power? For more great rankings, strategy, and analysis check out the 2019 FantraxHQ Fantasy Baseball Draft Kit. We’ll be adding more content from now right up until Opening Day!