Fantasy Value in Big 6 Matches: To Play or Not To Play? 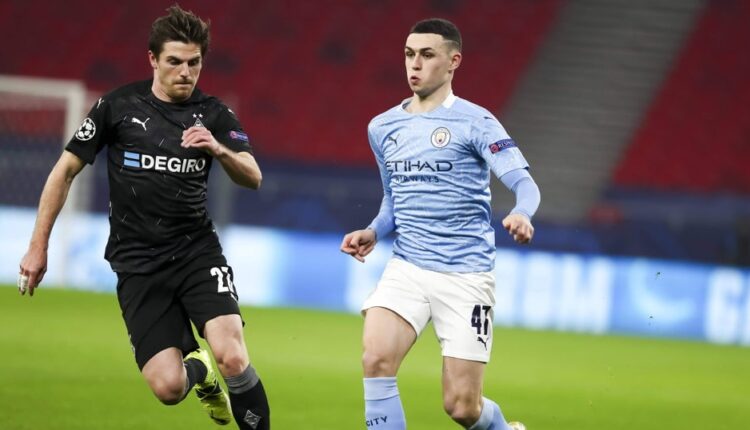 After a weekend in which Everton beat Liverpool, West Ham beat Tottenham, and Southampton held Chelsea, it might seem strange to devote an article to the analysis of fantasy performance in “Big 6” matches. But whilst the league table may currently indicate otherwise (and accurately so!), it still doesn’t change the perception that exists within most of us: there’s an elite group of 6, then there’s the rest.

The question, though, is not whether performance amongst the average player drops when taking on the big 6 – that can be for another time – but rather, what happens when a big 6 player takes on a big 6 team. When we have a battle between the superpowers of the league, does it hurt or help our big-name fantasy assets?

The analysis is pretty simple: I’ve calculated the average PP90 (points per 90) of all big 6 players when facing fellow big 6 teams and compared it to the average PP90 of all big 6 players when facing the remaining 14 Premier League teams. I’ve then broken it down by position. The first figure below shows these averages. The second figure visualizes the difference between the two matchups at each position and perhaps makes it easier to see what is going on when a big 6 player takes on a big 6 team. Note: this is data from the 2020-21 season, up to and including gameweek 25. 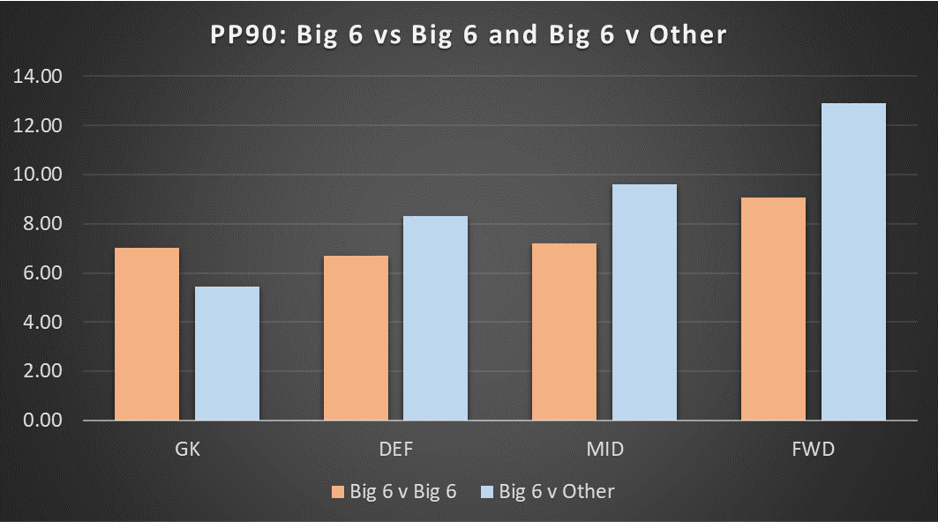 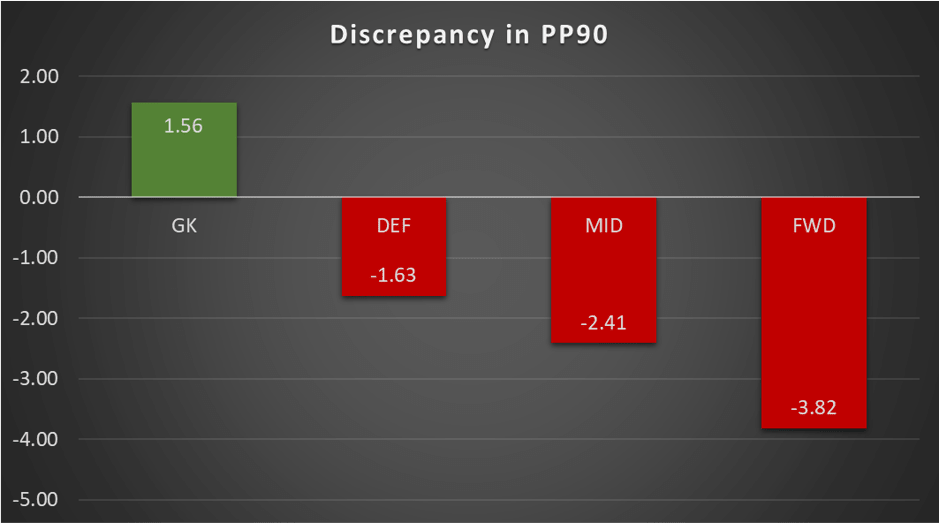 Long story short, you don’t want your big 6 players playing in big 6 matchups unless they are the goalkeeper. Only goalkeepers have a higher average PP90 – by 1.56 – in these showpiece games than in regular games against the rest of the league. For all outfielders, fantasy value is worse. And interestingly, the decrease in performance is greatest for forwards, followed by midfielders. Forwards lose out by a fairly sizeable 3.82 PP90 when facing fellow big 6 teams, compared to when facing the rest of the league.

What Does It Mean? Fantasy Relevance

73 players from big 6 teams have ownerships of 50% or more, with 37 of those having ownerships of 90% or higher, so the chances are, you own at least one player from a big 6 team. In gameweek 26, we see Chelsea take on Manchester United and Chelsea take on Liverpool; in gameweek 27 we have the Manchester derby, and in gameweek 28 we have the North London derby. Four big 6 matchups in the next three gameweeks. What should you do in these crucial games? Let’s take a look at six names from the big six.

Werner has started all six of Chelsea’s big 6 fixtures so far this season, with Abraham joining him in two, and Hudson-Odoi (classed as a forward in Fantrax) starting one. So Werner seems a safe bet to get minutes. His best return from these games, though, is just 10.5 (against Tottenham), and he averages just 4.25. It would be brave to bench him, and I’m always wary to suggest such things when the data covers two different managers, but it’s definitely worth considering if you are particularly strong up top.

Gameweek 26 may see managers want to take a punt on the 58% owned McTominay if he is available. United has a double gameweek, and the second is against Crystal Palace. Unfortunately, the first is against Chelsea. Ole has trusted McTominay in the big games, with the Scot starting 5 of 6, but in all of those, he has failed to surpass 6 points, with an average of just 4.6. Here is one that I would avoid. It’s conceivable, almost likely, that he gets another start against Chelsea, scores a similarly low score, and then get rested for the Palace game three days later. Yes, he has a DGW, but the first is not enticing, and the second he may not start. There should be plenty of better options out there on free agency.

Edouard Mendy is the lowest owned big 6 goalkeeper at 60%, but his “difficult on paper” schedule in gameweek 26 may actually be ideal for his position. If he outperforms his FP/G by roughly 1.5 in the matchups against Manchester United and Liverpool (as the data suggests he might), he could bring in over 15 points for the gameweek – a very nice return. What’s more, the first matchup against Manchester United may be particularly profitable. Big 6 goalkeepers have averaged over 12 points per game against Ole’s side – far higher than against the other five (Chelsea = 9.4, Arsenal = 8.2, Liverpool = 6.2, Tottenham = 4.2, and Man City = 4.0).

In the wake of KDB’s injury, it’s not surprising to see that Rodrigo is the midfielder with the most starts in big 6 games for City this season (7 out of 8). What may be surprising, though, is seeing that Bernardo Silva is next, with 6 starts. Unfortunately, he’s the one who’s performed worst in these matchups from a fantasy perspective, so if you own him, or are trying to find a way into this incredible Man City side, then just be aware of this when they take on United in gameweek 27.

The Portuguese international averages less than 6 in these types of matchups – 4 points less than in other games. This is in sharp contrast to his midfield teammates who, like City, in general, this season, seem to be bucking the trend of this analysis. Gundogan (5 big 6 starts) actually performs better in big 6 matches to the tune of 1.4 points per game, Rodrigo (7 starts) by 1.2, and Foden (4 starts) by an unbelievable 9.2! KDB (5 starts) sees his points drop, but he still averages an excellent 13.5 in big 6 matches. City assets seem to be fairly resistant to the big 6 drop-off, but Bernardo may be one to avoid.

Over on the other side of Manchester, it may be time for Greenwood owners to move him on. The 19-year old is constantly in and out of the team, and even when he does get a start, he often fails to produce (the exception being the 9-0 thrashing of Southampton in which even the United ball boys probably scored a few points). Greenwood still has an ownership of 70%, which is incredible for someone with an FP/G of 3.9 (PP90 of 6.1); though it probably shows the pull of a United forward.

Anyway, the upcoming schedule for Greenwood and the other forwards at United is not good, and (provided he starts) if Greenwood were to underperform against Chelsea and City by the 3.8 points that the data suggests he will, then those bad returns become horrendous ones. Try to ship him, if not, get rid…I don’t think he’s even worth a bench spot now. Note: you may wonder – after reading the final section – why Rashford and Fernandes’ names aren’t here. Well, these guys are first-rounders. If you own a first-rounder, you start the first-rounder, no matter what the data might say.

Finally, we move to Arsenal, where we have two forwards of note: Auba (100% ownership) and Laca (95%) ownership. Both have been handed starts in five out of seven big 6 games this season (three of which were together), but only one has been fairly serviceable. Auba’s scores of 1, 5.5, 12.5, 1, and 0.5 average out at 4.1 points per game, whilst Laca’s scores of 18, 6, 8.5, 15.5, and 2 average out at 10 points per game. The difference is significant because in games against the rest of the league, they have almost identical average scores (Auba = 10.1; Laca = 10.5). Since the start of the year, Arsenal’s XG is 6th best in the league, and Tottenham’s XGA is 8th worst, so it will be very tempting to start Aubameyang in the North-London derby in a few weeks. Personally, unless I was very thin for forwards, I wouldn’t.

I’m going to finish with the data for some of the big dogs from the big six. Nothing to necessarily analyze here, just some numbers for you to peruse… 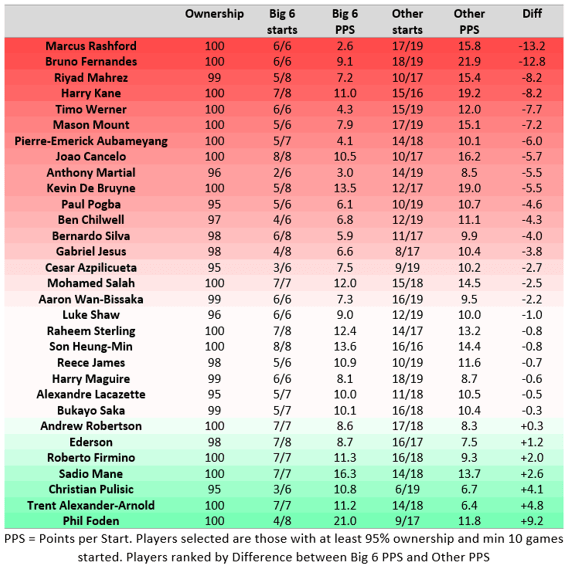 PPS = Points per Start. Players selected are those with at least 95% ownership and min 10 games started. Players ranked by Difference between Big 6 PPS and Other PPS