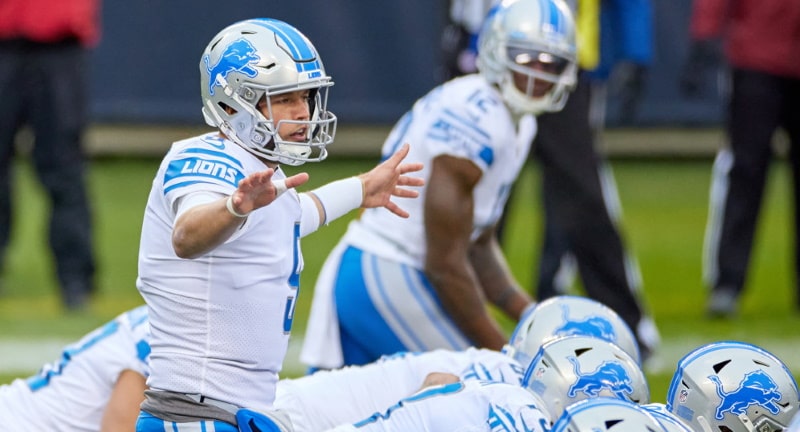 With March 17 marking the start of the new league year, we are now officially able to announce one of the postseason’s biggest deals: The Matthew Stafford – Jared Goff trade. Although this announcement has made waves for weeks, we now take a deep dive to assess its fantasy impact for not only the dealt quarterbacks themselves, but also how this will affect other fantasy players from their respective teams, and the individual organizations.

Breaking Down the Matthew Stafford Trade

First, we look in anguish at the NFC North’s last-place for three years running Detroit Lions. Off the heels of the new six-year contract for new head coach Dan Campbell, we see this trade as an obvious rebuild strategy move. With a young emerging star out of the backfield in D’Andre Swift and a bright spot on the defensive side in Jeff Okudah, there is some hope for the future. However, with the recent departure of team-leading wide receivers Marvin Jones Jr to the Jags, and Kenny Golladay’s recent blockbuster four-year, $72Mil deal with the Giants, hopes for a winning season are hard to imagine.

So really, what does this trade do for the Lions? On the surface, we look at the draft picks. The major component of the trade sees the Lions receiving this year’s compensatory 3rd round pick from the Rams (101 or 103 overall), as well as 1st round picks for the 2022 and 2023 season. With this year’s salary cap dropping to $182.5 Million (an 8% decrease from 2020), stacking up on young, talented, and inexpensive rookies will allow the Lions to set up for success…in due-time.

With the Rams being in a “Win Now” mentality and pushing all their chips in, one can only assume that they will once again put up successful winning seasons. Thus, making it likely the set of 1st round picks acquired will be late-round selections. And with little hope of a turnaround season anytime soon, this should give the Lions early 1st round picks of their own. With this heavy stockpile, I’m not holding off hope for a package set of players/picks in the next two seasons to help push the Lions up the draft board to snag a special talent. Ideally, something to help improve the league’s worst-ranked defense in 2020.

So, then what do we make of the Lions’ fantasy outlook? While the young 26-year-old Goff had previously enjoyed four consecutive winning seasons with the Rams, his fantasy performance just wasn’t in full force last season. After putting up below-average numbers in ideal matchups and 17 total turnovers, there is little confidence in him to turn this around in Detroit’s decimated offense. With the offensive losses in free agency, it will be difficult to rank Goff anything higher than a weekly mid-QB2 option. With the league schedule set to release, we do know now that Goff will make his return to Los Angeles in a road matchup this season against his former club.

Unless the Lions make a splash in free agency or at the entry draft, our only source of confidence in the receiving game lies with their former 2019 1st round pick, tight end T.J. Hockenson. After finishing 5th in targets and FPTS/G in 2020, the third-year pro should see an increased workload and continue to cash in near the Red Zone; where he received all 6 of his touchdowns last season. Moving the chains, however, that’s going to be a tall order.

Out of the backfield, we are left with many questions. Despite missing 3 games mid-season, rookie D’Andre Swift established himself as a competent runner and touchdown machine, coming in at #13 in rushing touchdowns and total receptions amongst RBs last season. With very little support to move the ball in the receiving game, expect the team’s No. 3 reception leader last season to make waves, but expectations need to be tempered.

Heading Down to Cali

Leaving the cold, snowy terrains of the Motor City, we cruise down the Pacific Coast Highway in California to Matthew Stafford’s SoFi Stadium. The former 1st overall pick in the 2009 draft finds himself with the offensive genius that is Sean McVay. Having made it to the playoffs in three of his last four seasons as head coach, he has equipped his newly acquired QB with all the weapons a 12-year veteran can hope for.

Although plagued by injury, Stafford is regarded as one of the NFL’s toughest leaders and has shown he can still be an elite option. Despite his lack of production in running the ball, let’s not forget we are talking about a QB who previously had seven consecutive seasons of 4,200+ passing yards. With a clear upgrade at the WR position, the only thing stopping Stafford from entering the Top-12 fantasy quarterback conversation is his ability to stay healthy and on the field.

Coming in 29th of 32 teams in Average Depth of Target in 2020, the Rams’ receiving duo of Robert Woods and Cooper Kupp get an obvious boost, now with a quarterback that isn’t afraid to sling it deep. Unless Stafford identifies a favorite option early, we expect the two pass catchers to be drafted very near one another, similar to what we saw last year in drafts.

Coming into his own late in the season, rookie RB Cam Akers may very well be Stafford’s first 1000-yard rusher. Though rarely used in the passing game, Akers’ efficiency in the running game will allow the Rams to move up the field quickly, and often. Careful monitoring of the crowded backfield from last season will be required during the preseason to assess his true potential value, this every-down back should take on the bulk of snaps this coming season.

With an offense like this, matched with what could be called the league’s best defense, it’s easy to say everyone wearing the blue and gold gets an upgrade in draft rankings.

Criticism can be made for the high-value draft picks given up to acquire the 33-year-old Matthew Stafford. But in today’s head coach carousel league, future picks don’t mean much if you aren’t around to see them. As a head coach, if you aren’t winning games and seeing your star players leave, you may very well be stockpiling future picks that you yourself won’t be around to make. As the old saying goes, make hay while the sun shines.

Looking at the entire scope of this trade, we especially like it for you Detroit Lions fans. Bringing in a young, proven quarterback to help build a bright future with what should be a few successful rookie drafts to come. With Goff leading the huddle, he will at the very least keep games competitive.

Seeing the Rams front office going all-in for the 2021 season, we get a similar flashback to the recent Superbowl Champion Tampa Bay Buccaneers, bringing in the aging Brady to win it all in their home stadium. One can only wonder about the things to come, considering Superbowl LVI will be hosted in fact…in Los Angeles.

Also, make sure to check out Meng Song’s latest Dynasty Rankings to stay on top of the ever-changing player pool.