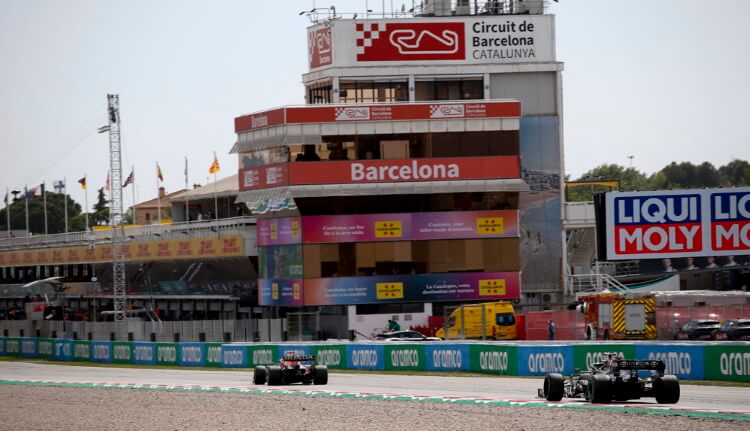 Welcome to Fantasy Formula 1! The newest sport on Fantrax is here, so grab your friends, start a league, and get to select your drivers. It’s Round 6 and the fourth race is the Spanish Grand Prix this coming weekend in Barcelona. We are here to help you with your driver selection! For a thorough explanation on how the sport and fantasy sport of Formula 1 works check out our explanatory piece from last week.

Just like last week, we’ll rank all 20 drivers in order of how we think they’ll score this week! These rankings should be applicable for nearly everyone playing Formula 1 on Fantrax, regardless of whether their matchup is for the sprint race or the full race! Note that these rankings are not in order of expected finishing position, but instead in order of expected fantasy points scored. That means they are incorporating all the scoring categories like finishing ahead of your teammate, places gained and lost, etc.

Verstappen won his second Grand Prix in a row in Miami and continues to be the favorite each week.

Leclerc got 2nd in Miami and continues to be very close to the Belgian in 1st and far in front of the remaining 18 drivers. He’ll continuously be our top selected tier B driver.

Perez was 4th in ranking and in finishing behind Sainz last time around. He’s also 4th favorite to win the race in Barca. However, these are fantasy rankings, and as such, the expectation that Perez will be outqualified by the 2nd Ferrari car actually serves to his advantage as he has more potential places to gain in the race.

Sainz held off Perez in Miami effectively, but his relative qualifying pace may hurt him fantasy-wise this week. These top 4 are in a class of their own, but picking between Sainz and Perez for the 2nd tier B driver will be 1 of the trickier decisions of the weekend.

Russell continues to be the most consistent driver of the season, going 5 for 5 on top 5 finishes thus far. That consistency coupled with his teammate, Lewis Hamilton’s struggles (or team strategy failings perhaps) get him to the fitting 5th spot this week. Each week the oddsmakers have given Russel better odds to beat his teammate straight up and they’re nearly 50/50 now.

Bottas finished P7 in Florida but if not for a late wide-turning mistake may have finished P5 in front of the Mercedes. He continues to be 1 of the most impressive drivers of the season given the tools he’s working with. Again, he’ll be out tier C driver.

Norris unfortunately crashed out last race but showed decent speed in qualifying. He also has the benefit of very likely beating his struggling teammate, Ricciardo.

Despite also DNF’ing last weekend, Gasly moves up in our rankings. Mostly due to his expected relative finishing position compared to his qualifying position. He’s expected to gain the 2nd most places of any driver

A rougher weekend for KMag in Miami, qualifying 16th and a DNF. However, the Haas is still quick, and Magnussen is expected to gain the most places on race day. Our tier D driver as normal.

A relatively better race for the former Champion in Miami finishing 5th place. After rubbing shoulders with multiple sporting GOATs he may have wanted more. That looks like the theme of the season for now for him unfortunately. Hamilton falls in our rankings cause he’s expected to qualify well but race relatively poorly, losing the most places of any driver on the track.

P8 last week, but expected to finish behind his teammate Alonso this time around. Ocon provides a decent floor, but little upside on race day.

The biggest riser this week, Zhou was actually the first retiree last race. He also qualified P17. But this is fantasy, and as he’s expected to qualify poorly, and his teammate has shown the race day pace of the Alfa, places gained may work in Zhou’s favor.

After a couple of races of getting close, Albon successfully got to the points in Miami. As we called out last time around, “he’s got upside when drivers in front of him DNF as he’ll get places gained after poor qualifying sessions, but still he’s not the best to bet on considering his car’s general quality”, 5 drivers DNF’ed and Albon made up 9 places. The same logic applies this week.

Tsunoda has a better car than some of those in front of him, but because he has one of the biggest gaps to his teammate (Gasly) and he’s not expected to finish in the points, there are just not many ways for him to score points at the moment. His talent offers some path to places gained on Sunday at least, if he doesn’t qualify too well on Saturday.

Ricciardo moves right back down into the depths. He qualified P14 and finished P13 only in front of the Latifi, Schumacher, and the DNF’s last week. Danny Ric needs something, anything to jumpstart his season

Schumacher has remained disappointing despite his team’s surprisingly good pace. He’s far beyond his teammate, Magnussen and has a lot to prove still.

Stroll managed a 10th place, points finish in Miami, but is expected to qualify and finish near the bottom this weekend. He’s expected to be out-qualified by Vettel, so slightly more opportunity for places gained.

Unfortunately, was forced to exit the Miami race after being driven into by Schumacher. Still a pretty decent qualifier on his day, but his car lets him down on race day, so plenty of downside with little upside.

Latifi is again expected to qualify and finish last. Calls for a seat change from Williams are heating up, and it may not be too long before we have a new name on this list instead of the Canadian’s.

Now get picking and enjoy the sixth Formula 1 race weekend!