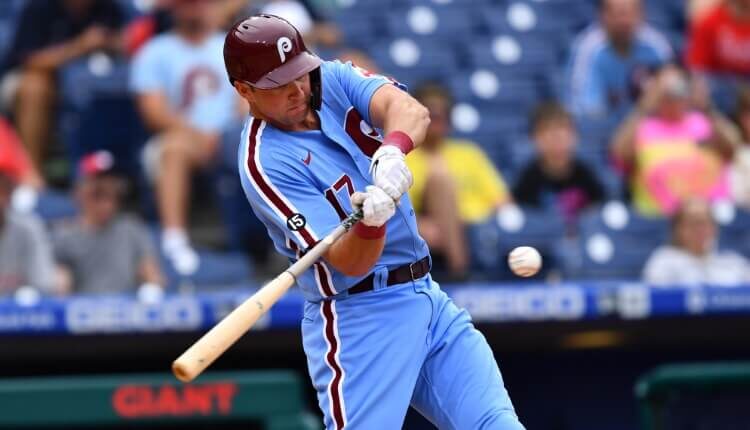 Week 6 of the MLB season is in the books, and we have more offensive standouts to discuss. In addition, while highlighting a few rostered players in most leagues, the article will also highlight some players that may not be on everyone’s radar unless you are playing in deeper leagues. So dig in and decide if the production is just a hot streak or something to invest in moving forward. First, let’s look at five hitters that had an impressive week and what we should do from a fantasy perspective.

Apparently, a seven-game road trip is all Hoskins needed to jump-start his season. Rhys hit safely in all seven games with 12 hits, four of which were home runs. He was even swinging it so well that he hit leadoff in three of the final four games of the week. However, there are still some concerns with the plate discipline as he struck out over 27% of the time with a 72% contact rate and 13.5% SwStr. There will always be some swing and miss in Hoskins’s game, but the power is also legit. If he can keep hitting higher in the order, then a big season is still ahead for the Phillies’ first baseman.

Walker is having quite the bounceback season after a disappointing 2021. He hit safely in four of six games this past week, with multiple hits. He did not showcase a ton of power, but the plate discipline and contact quality were excellent. He walked 12.5% of the time while only striking out 4.2%. Walker now has eight home runs and is hitting over .300 with a 13% walk rate while striking out less than 15% in May. So things are looking up for Walker going forward this season.

Velazquez had quite the week for the Angels. He hit safely in six of seven games for a .348 batting average. He had four extra-base hits, including a home run, and even stole two bases. Velazquez did strike out 28% of the time, which is less than ideal, but his 56.3% hard-hit rate leaves some optimism. Velazquez never really showcased much power in the minors but ran a lot and hit for a decent batting average. He’s worth a flier in deep leagues, but I want to see more now.

Well, looky there, a Kole Calhoun sighting. He finished the week with a five-game hitting streak that featured two doubles, a triple, and a home run. Calhoun barreled the ball 13.3% of the time with a 53.3% strikeout rate which is excellent but still way too much swing and miss. He struck out 30.4% of the time with a 40% O-swing and 23.2% SwStr. That lack of plate discipline will lead to many bad weeks. For now, Calhoun is only a streaming option when the matchups line up correctly.

Avi is having a very slow start to the season, and hopefully, this past week is a sign of things to come. He hit safely in five of six games with a home run and a stolen base. His 10.5% barrel rate and 47.4% hard-hit rate were nice, but his plate discipline still needs more work. He did only strike out 16.7% of the time, which is nice, but a 44.2% O-swing and 19.5% SwStr are still worrisome. I would take a flier in 12-team and deeper leagues where you need outfield help, but Avisail is not a must-add.