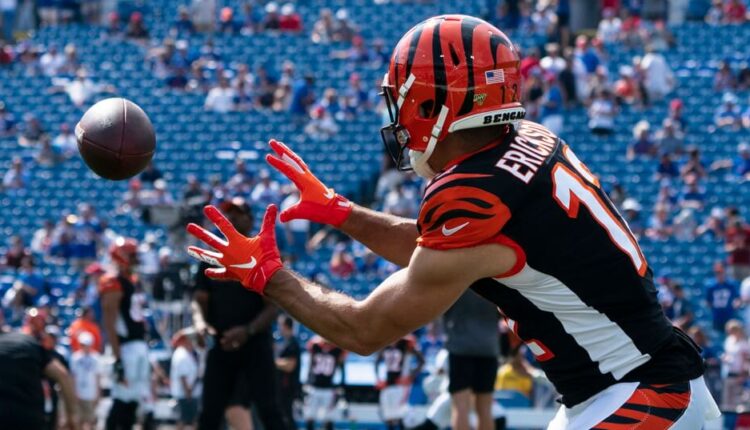 There are only two teams on byes this week, but not having the Cowboys and Ravens in action will certainly make some owners think about parting with some dollars from their Fantasy Football FAAB (Free Agent Acquisition Budget). We will not have Ezekiel Elliott, Mark Ingram, Amari Cooper, Michael Gallup and Mark Andrews available. Fantasy players will also be without the services of Lamar Jackson, the No. 1 scoring QB right now, and Dak Prescott.

The quarterback position is not only being affected by idle teams but also notable injuries. Patrick Mahomes, widely regarded as the best player at the position, will definitely be out this week because of a dislocated kneecap. Matt Ryan is also iffy because of an ankle problem, so owners will have to prepare to be without him. If you are going to spend some notable FAAB this week, it may be at QB, because the free agent player pool appears to be thin otherwise. Even if you do attempt to spend some dollars for a passer and you don’t win the bids, the position is deep and you can always swing a lower level trade for a Philip Rivers or Matthew Stafford. We’re not going to recommend extravagant bid amounts.

If your league doesn’t use the FAAB process you should also check out our Week 8 Waiver Wire.

Sam Darnold (75 percent owned in FanTrax leagues): His ownership totals are much lower on some other sites and will certainly shrink even more after a historically bad performance on Monday night. Darnold seems like a laughingstock right now, but he looked very good against Dallas in Week 6 and better times are ahead. You cannot be reactionary to his disgusting outing against a great defense, because Darnold likely won’t look that terrible again. As a consolation prize for going in the ring and getting knocked out by the heavyweight champ, Darnold now faces the Jaguars and “tomato cans” such as the Dolphins, Giants, Redskins, Raiders and Dolphins again. Miami, Oakland, and Cincinnati are Top 5 in Fantasy Points Per Game allowed to QBs. The Giants are fifth in passing yards allowed and Jacksonville is ninth. The Washington pass defense has looked pretty bad at times, too. Darnold could bounce back against Jacksonville before a very friendly stretch sets in.

Fantasy Football FAAB Recommendation: It won’t take much to acquire him in this reactionary Fantasy world, maybe 10 percent of your budget. Also watch to see if someone cuts him in your league as part of the initial transaction run.

Jacoby Brissett (72): He is not widely owned on other platforms and can be a steady, and sometimes above-average Fantasy QB. Brissett has gone from being maybe the best backup at his position to a quality NFL starter who often produces quality Fantasy totals. Brissett has thrown for 300 yards in two of his past four games and has three performances with three or more TDs in his past five games. He gets great protection and has a respectable supporting cast.

Ryan Tannehill (21): He threw for over 300 yards in his first start as a Titan and gets a tasty matchup against the Buccaneers, who allow the third-most FFPG to opposing QBs. Tannehill is an adequate one-week plug-in if you just need to replace Ryan in the short term or want to use him as a bye week replacement.

Fantasy Football FAAB Recommendation: Four percent of your budget. You don’t want to use him for more than one week.

QB NOTE: In some leagues, owners may have cut an injured Drew Brees and he could return as soon as this week. He is the one guy you should spend more on, especially if you lost Mahomes. If you have to replace the Kansas City QB, spend up to 35 percent of your budget. Otherwise, use 30 percent if you just want an upgrade.

Ty Johnson (16): Kerryon Johnson is out for an unspecified period and Ty Johnson is the next guy up at RB for Detroit. If you lost Kerryon Johnson, you should have been rostering Ty Johnson. You must always try to keep the handcuffs to your starting Fantasy RBs on your team. Ty Johnson had 14 touches for 57 yards in Week 7 against Minnesota. The Detroit running game has not looked too good this year (ranked 18th) but you have to make the play for a RB who will start in the near future and should get a healthy amount of touches.

Fantasy Football FAAB Recommendation: 30 percent of your budget. Only go higher if you are desperate. Ty Johnson may not outperform too many regulars at the position.

Chase Edmonds (77): He is certainly available on some other sites and may be the most highly sought-after Fantasy free agent this week. As more proof that you need to roster handcuffs, Edmonds stepped in and rushed for 126 yards and three TDs against the Giants. He is one of the best backup RBs in the NFL and David Johnson’s ankle injury may still be an issue. Edmonds could still get a decent amount of touches even when Johnson returns.

Fantasy Football FAAB Recommendation: He may not be a long-term contributor, so only go up to 30 percent.

Mike Davis (29): Hear me out on this one. Davis has been a complete non-factor in the Chicago offense the past few weeks (no carries in the past three), but the opportunity may be coming, as the other Bears RBs have been non-factors when in the games. The Bears rushed for 17 yards in a loss to New Orleans, and Davis has played well in the past when pressed into action. If Matt Nagy decides to make some changes on offense, he may pull Davis out of the freezer to give him a chance.

Fantasy Football FAAB Recommendation: One percent of your budget. No one else will claim him and this is a flier based on speculation, but with a legitimate theory behind it.

Zach Pascal (8): He may have come through with a breakout performance in Week 7, with 106 receiving yards and two TDs. Or it just may be the one game where he looked like a legit NFL starter. But you have to bid on him because T.Y. Hilton needs a true complement at WR and Pascal has provided minor glimpses of promise before.

Alex Erickson (5): His eight-catch, 137-yard outing in Week 7 was not a shock to those who follow the Bengals closely. There has been buzz about Erickson possibly playing an integral role in the Bengals passing game for some time now. He’s slippery and a dose of energy for the offense, so take the chance on him in Fantasy free agency. The Bengals do have Tyler Boyd and Auden Tate already established as Fantasy contributors, and A.J. Green might return soon. But Erickson may simply demand that he gets targeted more often than ever before, and Green could be traded in the near future.

Fantasy Football FAAB Recommendation: Four percent of your budget. Not many will be in on him, even after his last outing.

Olabisi Johnson (5): The seventh-round rookie could play a more expanded role against Washington this week as Adam Thielen is expected to be out with a hamstring injury. He had four catches for 40 yards in Week 7 after Thielen went down.

Fantasy Football FAAB Recommendation: Three percent. He is a short-term plugger in larger leagues and a DFS play on Thursday Showdown games, but not much more.

Jonnu Smith (8): Delanie Walker has been banged up and mostly ineffective, while Tannehill has already shown he is willing to go to his TEs in key situations. He had 35- and 24-yard receptions in Week 7, displaying some impressive athletic ability after the catch.

Fantasy Football FAAB Recommendation: Seven percent. There is not much available on Fantasy free agency at TE right now, so take the chance on Smith, but he has teased before, so don’t spend too much.