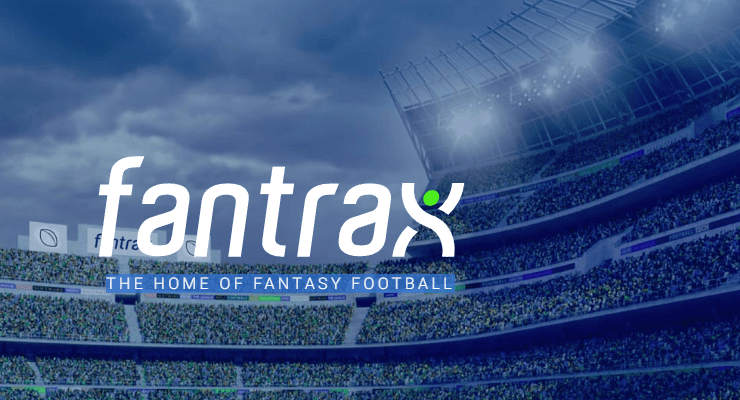 Chris Allen lays out his fantasy football draft strategy for the coming season.

Fantasy football drafts can be one of the most exciting events of the season. Football degenerates get to tout their knowledge having been plugged into the league all offseason. Casual, but competitive managers can argue with the degenerates over which pick was better. All the while, the person invited to join the league as ‘the sucker’ times out, mispronounces a player’s name, and lucks into the winning roster.

Drafts are an integral part of fantasy football with multiple strategies and approaches to constructing your roster. You could likely hop on Twitter right now and find people arguing for or against a particular fantasy football draft strategy. Not just the concept, but its components. Who to draft. How many of each position to acquire. When to target positions. Core concepts are given away by their names, but each has a rabbit hole any fantasy drafter can go down.

Instead of a deep dive into a single fantasy football draft strategy, let’s take a step back and look at the draft for what it is. Some championship rosters have Eli Manning as their starting quarterback. Others have Patrick Mahomes. They may look different and the strategies to get there may also be different, but there are some core concepts every fantasy gamer can use as the fantasy season begins to heat up.

“You can’t win your league in the first round, but you can lose it.”

The age-old adage always brings about a sense of anxiety when fantasy managers approach their draft. Personal preference can lead you in a number of directions:

ADP data gives us insight into how the fantasy public at large values each category. While the players may have changed, the tendencies have not.

The aforementioned strategies have general tenants that provide a structure. Not a specific player, but an archetype or usage profile that can emphasize the idea. As ADP data indicates, draft position will directly affect the type of player available and can change anyone’s predetermined draft strategy. So while the rest of your league discusses the viability of each strategy, the +EV approach is to look for the value players that may fall to you as the draft progresses.

Bruce Lee’s philosophy can be applied to fantasy football and we’ve heard it reapplied over the years.

“Zig while others zag.”

“Use an upside-down draft approach.”

The idea is that pockets of value can open up as a draft unfolds. Let’s walk through a couple of examples.

Let’s assume the majority of your league employs the ‘Late-Round QB’ strategy. It’s an effective strategy that’s been used over the last 5 years with positive results. This would push the opportunity cost of most quarterbacks into the mid to late rounds. However, if this process is employed by most of your league, it creates a vacuum for quarterback value that can be leveraged by a savvy manager. Scott Barrett (PFF, @ScottBarrettDFB) showcases that strategy in the latest #MFL10ofDeath.

Some of the sharpest analysts are invited to the annual best-ball draft and most employ this strategy. Watson’s ADP is 61st overall and in best-ball leagues he’s being drafted at 85th overall. Barrett, understanding his competition, took Watson at 94th overall and almost a full round past his ADP. Regardless of the player selected, the opportunity was there for Scott to take any QB (e.g. Luck or Rodgers) at a value. Strategies, like rules, can be broken.

Positional runs seemingly appear out of nowhere leaving many drafters experiencing FOMO. It overrides any draft strategy short-term or overall forcing many to lean into the run. While most fall prey to this idea that ‘no one will be available later’, here’s another scenario where adapting to your league can be advantageous. It happens in most best-ball drafts.

The ‘onesie’ positions and running backs are quickly taken as the mid-round rush hits. But while Managers 1-5 fight over those, Manager 6 takes the value at wide receiver. Anthony Miller is currently valued at 119th overall (WR 49). After the run, he was selected at 126th overall and WR 51 boosting his receiver corps and avoiding the run. A simple application that pays dividends if applied during runs in the earlier rounds.

Understanding ‘Get Your Guys’

If your league uses one of the major industry sites (e.g. ESPN, Yahoo, etc.), prepare to be bombarded with cheat sheets, player profiles, and ‘this year’s sleeper that absolutely no one is talking about’. The site-specific ADP is what you want. Compiled by their analysts, it will likely differ from both other sites and your own rankings. However, it will influence the draft. Earlier ADP will push names up to the top of the draft list causing ‘value’ picks to be selected early. This can be managed. 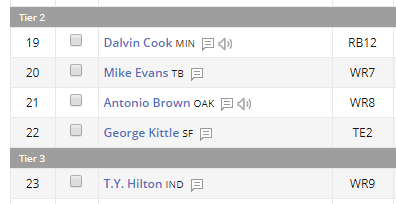 Tiered rankings pick up where numerical rankings leave off in terms of establishing value. Tiers can and should be manually adjusted by managers prior to the draft. They set reasonable expectations on season-long outcomes and value within and across positions. It also helps identifying draft discrepancies between ‘your guys’ and the general public.

‘Your guys’ are impact players you’re willing to draft ahead of ADP or preferred late-round targets. By comparing draft site ADP to personal ADP, inefficiencies can be identified and a stronger draft plan can be formed. Here are a few examples using ADP data provided by Yahoo and CBS Sports, respectively:

There’s nothing wrong with drafting players we believe in or genuinely admire. If anything, that is and should be a prime component of fantasy football (aside from making the game unenjoyable for the other people in your league). But, admiration can come at a cost. Understanding and planning for the required draft capital to acquire your players of interest can set up two possible scenarios:

While the second scenario does not net you ‘your guy’, both scenarios result in a positive impact on your squad and fantasy experience. Winning your league is the primary objective, but we try and have some fun in the process.

Look at some of your drafts. Look at other people’s drafts. How do they look?

‘Balanced approach’ and ‘solid all-around’ are typical descriptors for a fantasy football team. Good in some spots and generally considered contenders by marquee players at almost every position.

But, do you need them?

Shawn Siegele coined the Zero-RB strategy with modified approaches over the seasons. This draft strategy exploits PPR scoring along with the understanding of supply and demand regarding the ‘onesie’ positions. So while most drafts will look to fill out rosters evenly, you might come across a roster that looks like the one below.

Shawn has applied this to best-ball, but the idea is still the same. A lot of risk here, right? Absolutely. But, you can quickly construct a narrative on how this core could overtake a league. If the objective is to win, especially in best-ball formats, drafters should be able to embrace volatility over balance to create a winning squad. Your roster may not look right but accepting risk can be the perfect draft strategy to become a champion.

It all starts here. The timer. Your friends in the chat or in your ear laughing at each pick. Your roster. And that’s all that really matters.

Your group of players to begin the NFL season. Will there be busts? Sure. Will there be injuries? Better pray to the fantasy gods before each week. But the draft is where it all starts. The two important concepts to keep in mind during each draft are fairly simple, but take time and practice to master:

Value can be subjective, but draft data and tiered rankings can give us an idea of where value can be found. Risk comes when that data is shoved aside while we stroll down Narrative Street. Combining the two can result in a lethal combination.

Don’t tie yourself to a specific fantasy football draft strategy. Don’t give in to the fear of missing out on the hype. The season is long and full of terrors. Use these concepts and start off with a roster capable of bringing home a championship.

Are you on board with Chris’ fantasy football draft strategy? For more great analysis check out the 2019 Fantrax Fantasy Football Draft Kit.