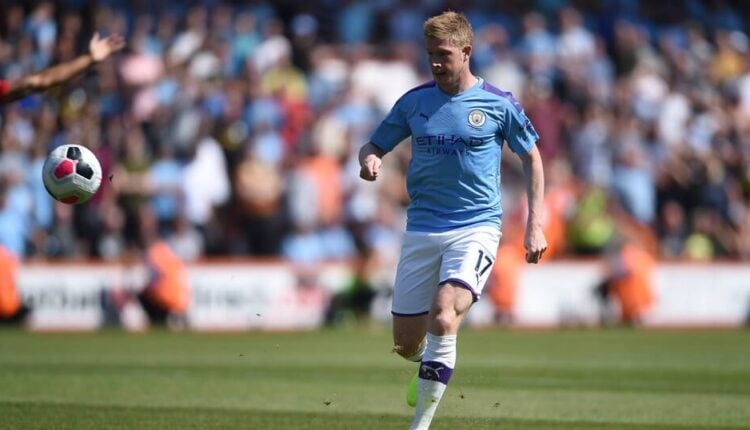 Wondering who the best current Fantasy EPL players to target are?  Look no further than our Top 100 ROS Player Rankings!!  We’ve updated our pre-season Fantasy Soccer Draft Rankings to produce an essential list of Premier League players that you simply need to acquire this season!

Here we rank our Top 100 Rest of Season Premier League players, based on their prospects on Fantrax between Gameweek 9 and the rest of the season.  We’re basing these rankings on the intelligent and statistics based Togga scoring system.  Try and trade in the top players from this list!  And if any of these players are currently free agents, you simply have to sign them!

Now we’re a couple of months into the season, we’ve updated our pre-season Draft Rankings to produce a Top 100 ROS Player Rankings list!  This list will be updated every couple of months, giving you access to our exclusive list of the best Fantrax Fantasy EPL players.

The undeniable number 1 player for the rest of the season is Kevin De Bruyne.  The Manchester City midfielder has been incredible so far this season, with an average score of 23.29 points per game!! Completing the Top 5 is four forwards that are very hard to separate.  Mohamed Salah, Raheem Sterling, Sadio Mane, and Sergio Aguero is our order.  Try and trade in any of these Chaps at (pretty much) any cost.

Pierre-Emerick Aubameyang and Harry Kane are ranked 6th and 7th. Aubameyang has been strong so far this season and fully deserves an elite slot, but Kane is somewhat lucky to be ranked this highly.  The England man should improve over the coming weeks and months, however.  James Maddison is ranked 8th overall, and 2nd for midfielders, after an excellent start to the season.  Trent Alexander-Arnold is the highest-ranked defender after a sensational start to the season.  Liverpool teammate Roberto Firmino rounds out the Top 10 of our ROS Player Rankings.

Kicking off the next batch of players is this season’s surprise package, Tammy Abraham.  We recently featured the young forward in our Six Takeaways from the Fantasy EPL season so far; he could have potentially gone undrafted during pre-season!!  Anderson is our third-highest midfielder, as he’s been gaining incredible points scores without attacking returns… and without many minutes in some cases too.  Mason Mount is up next, as he continues to perform very well under Frank Lampard.  Callum Wilson is in 14th place after a very productive start to the season.  And Paul Pogba is lucky to make the Top 15 after a very disappointing season so far.  Hopefully, he finds some form and fitness from now on.

A couple of players that have over-performed based on our pre-season rankings are up next, Riyad Mahrez and Sebastien Haller.  Both of these chaps should see their Fantasy EPL productivity remain at a high level.  Son Heung-Min and Jamie Vardy are ranked 18th and 19th overall, with Leicester right back Ricardo Pereira in at 20th – the second-highest overall defender.

Gylfi Sigurdsson is perhaps lucky to be placed in 21st after Everton’s shocking start to the season, but we think he’ll be able to increase his points scoring for the rest of the season.  Joshua King has played extremely well this season, and fully deserves his place in the Top 25; he’s ranked 23rd overall.  Chelsea youngster Callum Hudson-Odoi has gained 25 points from his two appearances so far under Lampard, and we think he’s going to perform very well.  John McGinn and Emiliano Buendia are ranked 25th and 26th overall after starting life in the Premier League incredibly well.  Marcus Rashford and Alexandre Lacazette will be disappointed with their starts to the season, but Jack Grealish is ranked 29th after a great start.

Andriy Yarmolenko is ranked 34th overall, after a set of great performances since making his way into the West Ham best eleven.  Tanguy Ndombele is the 13th highest midfielder, ranked 37th overall, after performing well despite Tottenham’s poor form. Bernardo Silva and David Silva are both ranked fairly low due to their rotation issues.  Oliver Norwood and Rodrigo make the Top 50 after performing very consistently so far this season.  Tottenham man Dele Alli also makes the cut despite scoring zero points so far this season.

Wilfried Zaha and Ryan Fraser are ranked a lowly 49th and 50th after poor starts to the season, and Christian Eriksen is only 59th as he looks set to leave in January.  Enda Stevens is the 11th highest defender after a strong start to the season. Similar strong starter Caglar Soyuncu is the 12th highest defender.  Matt Doherty is ranked 67th overall after an indifferent start to the season.  Kieran Tierney is 68th as he looks set to shine after returning from a long term injury.  Erik Pieters has played extremely well so far this season, but we’re ranking him as only the 15th best defender for the rest of the season. A few big names in Andros Townsend, Ayoze Perez, and Gerard Deulofeu are ranked 79th to 81st.

Wondering who the best low ownership players to target are? Look no further than our Fantasy EPL Sleepers Rankings for Gameweeks 9 to 13!