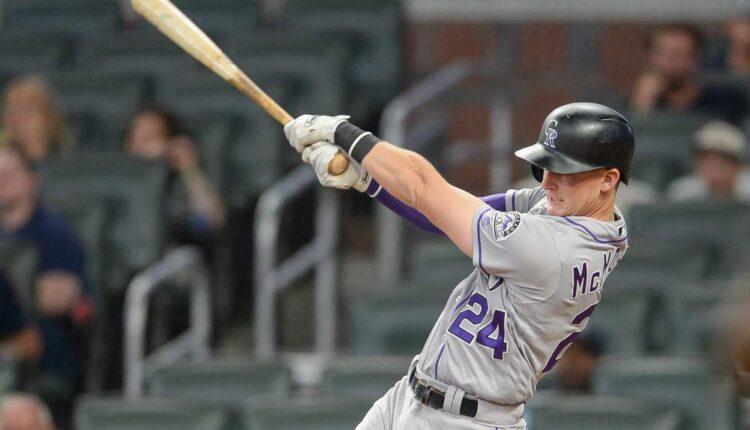 The theme in this week’s Fantasy Baseball waiver wire report is forgetting the past, moving forward, and giving second chances. Two of the hitters below were fantasy sleeper darlings coming out of 2018 spring training but only caused headaches for their fantasy owners. Leave all that in the past, though, as this duo can help your fantasy squad out right now, and that’s what matters. In addition, there are several under the radar pitchers that have started the season strong and have favorable matchups on the horizon.

Straight from the IL to one of the hottest Fantasy Baseball waiver wire pickups of the week. If Ryan McMahon was dropped in your league when he got injured weeks back, hustle your booty to your league’s waiver wire and click the add icon quickly. The Rockies activated McMahon from the IL yesterday afternoon and inserted him right back into the lineup last night, batting him 5th at first base. How’d he do in his first game back? Oh, nothing much, just cranked a couple of dingers. No big deal.

Ryan McMahon returns from the IL and hits his first tater of the year. pic.twitter.com/WQz7wm2Zoe

If you recall, McMahon was one of the top hitters in spring training, hitting .424 (2nd to Robinson Cano) with three homers, 14 RBI, 11 runs, and a league-leading nine doubles in 59 at-bats. The playing time should be there, with him seeing time at both first and second base moving forward, and he’ll likely bat in a favorable lineup spot behind Nolan Arenado and Trevor Story, so expect solid RBI totals from Mr. McMahon to go along with a good average and some pop. I know a lot of us were burned by him last spring, but that’s in the past. McMahon needs to be owned in all mixed leagues. Period.

Speaking of players that burned us last spring. Kingery fell flat on his face last season after a big season spring training and finished with a paltry .226 average in 452 at-bats. Outside of NL-Only leagues and dynasty leagues, nobody wanted to own Kingery for the last 80% of the 2018 season. Fast forward to 2019 Opening Day and not many were drafting Kingery due to his 2018 performance and lack of playing time. However, with Jean Segura missing the last two games and Kingery off to a hot start, more playing time has opened up over the last five games. Kingery has started four of those games, recording two 3-hit games and a pair of home runs.

It’s looking like Segura is going to miss another couple games and a stint on the IL isn’t out of the question either, so Kingery should continue to start at shortstop for now and likely has played himself into additional playing time moving forward even when Segura is back.

Saying Hunter Dozier is on fire is a major understatement. yes he’s had two hitless efforts in his last three games, but overall, Dozier has six multi-hit games in his last eight, including a string of five in a row. During his days as a prospect, I wasn’t overly high on Dozier. He displayed an average hit tool and power at best, and never really impressed me at any level, outside of a decent 2016 where we hit .296 with 23 homers in 486 at-bats combined between the Double-A Texas League and Triple-A Pacific Coast League.

Overall, he was fairly inconsistent and has under performed since that 2016 season, hitting .249 in the minors and .229 in the Majors. While it’s still a small sample size, Dozier has made some improvements this season that give me more confidence in him for the rest of the season. First, he’s improved both his walk and strikeout rates to 11.3% and 21.1% respectively. On top of that, his O-Swing% and SwStr% rates have both improved. The added patience has really paid off for Dozier to start the season, allowing him to wait for a pitch to drive, which he has been doing with regularity, registering a 44.7% hard contact rate and 46.8% fly ball rate so far. All these adjustments make the former #8 overall pick an intriguing pickup off the Fantasy Baseball waiver wire this week.

To be honest, I didn’t expect the Orioles to have this many wins until some time in May. They’re still under .500, but have shown some life to start the season and one of the brightest birds in Bird Land so far has been Dwight Smith Jr. During his time in the Blue Jays system, Smith wasn’t a highly-ranked prospect but held his own with a .268 average and flashing double-digit power and speed. Now he’s flashing that 15/15 upside while regularly hitting third in the Orioles lineup. With his pedestrian peripherals, I don’t expect him to continue at a near top-50 overall pace or anything, but if you need an outfielder that can provide some pop, speed, and a batting average that won’t kill you, Smith is a solid target this week.

Don’t look now, but Frankie Montas has been a top-15 fantasy pitcher so far this season. Yes, really. That’s what happens when you have a 2.70 ERA, 0.94 WHIP, three quality starts, and a 20/6 K/BB ration through your first four starts. While Montas was a serviceable fantasy starter in 2018, the addition of a splitter has really taken his game to new heights this season. He’s been throwing the pitch 17.9% of the time while his four-seam fastball usage has dropped from 72.4% in 2018 to 56.6% in his first four starts this season. It seems to be working for him as Montas has seen improvements in both his O-Swing% and SwStr%. The strikeout rate is still pedestrian and he’s not likely going to be a top-20 arm this season, but Montas is definitely too good to be sitting on the Fantasy Baseball waiver wire right now.

I have to make sure @pitchingninja didn't miss this "messing with timing" pitch from Frankie Montas yesterday pic.twitter.com/k5v3br21PV

Handling pitching during the season always has been and always will be a fickle beast. Take Jordan Lyles for instance. Just two seasons ago in 2017, Lyles had a disgusting 7.75 ERA between 33 relief appearances with Colorado and five starts with San Diego. For his career, he has a 5.22 ERA. Not exactly a number that inspires a lot of confidence. But with how he’s been pitching to start the 2019 season, Lyles is worth a look in deeper mixed leagues. Through his first two starts, Lyles has only allowed one earned run in 11 innings with a 12/4 K/BB rate. He has two very favorable matchups upcoming, today against San Francisco and next week against Arizona, before what’s projecting to be back to back starts against the Rangers.

To the surprise of most, the Detroit Tigers have been one of the best pitching teams in the Majors this season, ranking third in ERA so far. The emergences of Matthew Boyd and Spencer Turnbull have a lot to do with this staff’s success. Through his first four starts, Turnbull has pitched 21 innings with a 3.43 ERA, 1.29 WHIP, and 10.3 K/9. The key for Turnbull so far has been the effectiveness of his upper-80s slider that has been acting more like a cutter. Hitters have yet to get a hit off his slider in 18 at-bats, with the pitch accounting for half of his 24 strikeouts so far. In his next three starts, Turnbull draws the struggling Red Sox, White Sox, and Royals, giving him plenty of appeal moving forward. While he’s pitching this well, Turnbull needs to be owned in more leagues.

With Wade LeBlanc out for the next month with an oblique injury, the Mariners recalled Erik Swanson from Triple-A to fill the void in the rotation. Swanson impressed in his first start, firing six innings of one-run ball, allowing one hit with zero walks and five strikeouts. While he was never considered a top prospect during his time in the Yankees system, Swanson has pitched quite well during his minor league career, currently sitting with a 3.31 ERA, 1.16 WHIP, 2.2 BB/9, and 9.2 K/9. While his promotion was just to fill in for LeBlanc, Swanson could very easily pitch his way into a permanent spot in the shaky Mariners rotation for the rest of the season.

NFL Draft Notebook: Veterans Who will be Affected by Early Picks