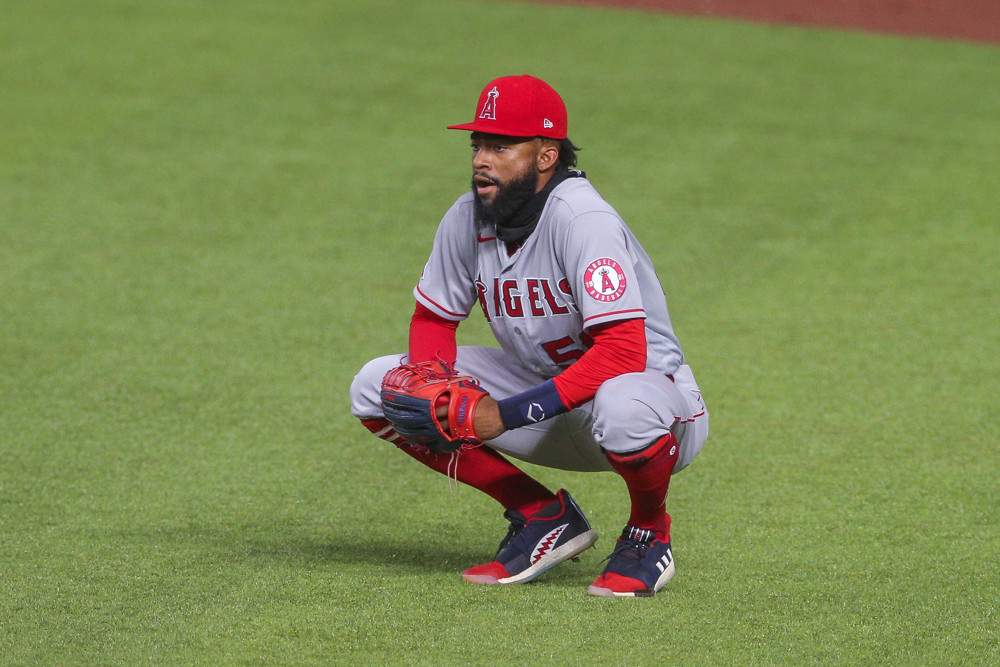 While the 2020 season has been weird, frustrating, and a downright pain in the butt, it has brought us plenty of intriguing prospect debuts, both on the mound and at the plate. That was especially prominent this past week as uber outfield prospect Jo Adell got the call along with two of the top-10 pitching prospects in the game.

Of course we need to lead with Jo Adell. He’s a top-5 dynasty prospect according to yours truly after all. With a prospect as talented as Adell, the immediate and longterm excitement is enormous. But should we temper expectations initially for 2020 redraft leagues? The short answer is heck to the yes. If you followed Adell’s 2019 campaign, you’ll remember that he struggled mightily after getting the promotion to the Triple-A Pacific Coast League. In 27 games, Adell slashed .264/.321/.355 with zero homers, one steal, and a 32.8% strikeout rate.

Long-term, you have to be giddy if you roster Adell in dynasty leagues. While the approach still needs refinement, the contact skills are above-average with 70-grade raw power that he can flex to all fields and plus speed. However, Adell hasn’t run much since reaching the Double-A level in 2018, combining for nine in 87 games at Double and Triple-A. Adell has the speed to steal 20-plus over a full season, but we’ll have to see if he runs enough to reach that level.

Peak Adell could put up some .280/40/20 seasons and be an annual top-2 round selection. Just don’t expect elite production right off the bat. In re-draft leagues, I’d sell high quickly if possible to get a more reliable option this season. In dynasty leagues, it’d be beneficial to float his name out there in your league to see if you get some ridiculously high offers, but if not, hold and enjoy the ride.

We’ve been blessed with several top pitching prospects gracing us with their presence early this season and the latest in that long line was Phillies right-hander, Spencer Howard. Over the last two seasons, Howard has ascended from being a good pitching prospect with upside to one of the 10-best pitching prospects in the game. When you watch him pitch, it’s easy to see why the ascension happened.

Howard is a 6’3 right-hander that attacks hitters with a four-pitch mix out of a 3/4 arm slot. The delivery is athletic with repeatable mechanics and Howard tunnels all of his pitches quite well. The arsenal consists of two plus of better offerings in his fastball and changeup, a slider that flashes plus, and curveball that is at least an average Major league pitch and flashes better than that. While his fastball is highly effective in the mid-90’s with life, Howard’s changeup is his best offering, grading close to double-plus due to the velocity separation, movement, and command Howard has on it.

With this type of dynamic arsenal and above-average to plus command and control, Howard possesses one of the best ceiling/floor combinations of any pitching prospect in the game today, with that upside being that of a high-end #2 starter. Bid with confidence in redraft leagues too as Howard could be a top-40 fantasy SP the rest of the way.

Earlier in the week, another top-10 pitching prospect got the call for his Major League debut, this one out of the magical San Diego system. I’m sure fantasy baseball fanatics were hoping for Batman (Gore) to get the call first over Robin (Patiño), but Patiño could make a big impact this season if given the chance to start. That could come soon too as Joey Lucchesi was optioned off the active roster late last week, thus opening up a rotation spot. That’s going to be huge for determining Patiño’s re-draft impact as he doesn’t have much value coming out of the bullpen.

When comparing Patiño to Howard, the ceiling is similar, but Patiño’s floor is just a touch lower in my opinion. Mostly due to his lesser command and control. Patiño’s fastball and slider are both plus offerings with the fastball sitting in the mid-’90s and touching upper-90’s at times. The slider is a hard breaker with big two-plane tilt that serves as Patiño’s primary out pitch. These two offerings are his bread and butter and can carve up opposing lineups, but Patiño is truly at his best when he can mix in his changeup as well. The pitch is behind his fastball and slider but does flash above-average when he’s commanding it well.

For now, I’d be stashing Patiño in leagues with deeper benches in hopes that he moves into the rotation soon.

Anderson Tejeda (2B – TEX): The Rangers promoting Anderson Tejeda was very much a low-key promotion, but one to at least monitor. My #21 Rangers dynasty prospect has struggled to make consistent contact as a pro but offers some intriguing power potential as a middle infielder. Over a full season, this could be a 20-homer bat with close to double-digit steals, but we’re a long way from that potentially happening.

Andy Young (2B – ARI): While he only ranked 22nd in my top-25 Arizona Diamondbacks dynasty prospects this offseason, that had more to do with Andy Young’s age (26) and the talent and depth in Arizona’s system. As with Tejeda above, Young can pack a punch for a middle infielder with above-average to plus raw power. That power has been his carrying tool, but Young has also displayed around an average hit tool as well. Longterm, Young could be a .270/20 bat at peak if given the chance to start.

Ryan Castellani (RHP – COL): Uhhhh, he’s a Colorado Rockies pitcher and not one with an overly high upside. Castellani looked good in his MLB debut, but this is a back-end starter’s profile that will have to pitch half his games at Coors. All of that limits him to NL-Only leagues.

Brandon Marsh Getting Reps at 1st Base

This might seem like a minor detail at first, but it’s a positive as far as I’m concerned. Brandon Marsh is a top-50 dynasty prospect with impact potential on both sides of the ball. However, when you’re an outfielder in an organization with Mike Trout and Jo Adell already locked into two of the three outfield spots longterm, flexibility is key. That’s not even mentioning Justin Upton and Brian Goodwin who are both signed through 2022, and Shohei Ohtani who might get some time out there down the road. The Angels do have Albert Pujols playing a little first base, but he’s mostly a DH at this point of his career and is a free agent after 2021 anyway. So when you think about it, getting Marsh some reps at first base makes sense.

Playing him at first base pretty much wastes his strong throwing arm, but if it allows Marsh to break into the everyday lineup more easily, I’m all for it. Marsh is one of the more underrated names you’ll see in top-100 lists. While he doesn’t have any “wow” tools, Marsh possesses an above-average hit tool, above-average raw power, and plus speed with solid instincts on the bases. That raw power has yet to translate into a ton of game power, but that’s more of an approach issue than anything else. Marsh’s swing is more geared for line drives that towering blasts and he produced a 54.1% groundball rate in 2019. Some added loft could allow Marsh to flirt with 20 homers to pair with 20-plus steals and a solid batting average in the .270-.290 range.

Honestly, I could see how one might do so with all the higher-profile names in this farm system. But overlooking Jake Cronenworth altogether would be a mistake. The versatile infielder slashed .329/.422/.511 in the minors last season with 10 homers and 12 steals in 97 games. On top of that, he also pitched in relief for the first time since 2015 at the University of Michigan. While I’m not sure the two-way will ever fully come back for him, Cronenworth’s ability with the lumber and versatility on the field can provide value in fantasy leagues.

Throughout his professional career, Cronenworth has played all four infield positions with the vast majority of his time coming at the shortstop position. Well, a quick check of San Diego’s depth chart shows some guy named Fernando Tatis Jr. there so Cronenworth will need to move off of short or embrace a super-utility role if he wants to see consistent playing time with the Padres.

Listen, I’m not here saying that Cronenworth will be a future all-star by any means. But what he can be for fantasy managers is a more impactful Brock Holt. Someone that can hit for a decent average while pacing at around 10-15 home runs and 15-20 steals. For now, he’s merely a deep league option but could force his way into the 12-15 league discussion if the playing time is there.

With the uncertainty around when the St. Louis Cardinals will play again, that in turn puts Dylan Carlson’s ETA in question. The Cardinals won’t play again until Thursday at the earliest and it could be even longer than that. All that uncertainty drops Carlson out of the top stash spot for me. There’s a clearcut top-5 for me here with 6-10 being more of the luxury stash types. If you have deeper benches and want to stash Jarred Kelenic, be my guest. However, I’m only stashing the top-5 names in standard mixed leagues as they all could be up this month.

As mentioned above, it’s starting to sound like MacKenzie Gore will be up sooner rather than later. Time is running out to stash him in redraft leagues. Meanwhile in Atlanta, it’s looking like a strong possibility that Tucker Davidson or Ian Anderson get the call soon after Sean Newcomb was optioned.