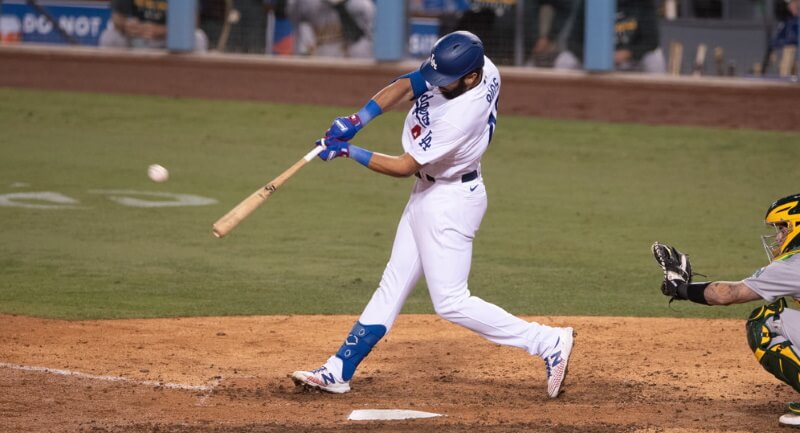 Last year the Dodgers hype train was chugging along heavily for the young arms like Julio Urias and Dustin May-while also making a stop for Gavin Lux. If you weren’t paying close attention, there is a chance you overlooked the impact Edwin Rios made for the World Series champs. The 26-year-old Puerto Rican is now looking for full-time plate appearances to showcase his powerful bat in an already loaded lineup.

In this article, we will take an in-depth look at a few aspects of Edwin Rios’ game to understand his expectations better. While Rios may not have started the season on many fantasy baseball teams in 2020, there is plenty to take notice of for the upcoming year. Without any further delay, let’s dive in!

You hear the term Statcast Darling thrown around in various articles or podcasts and might ask yourself what that means. BaseballSavant uses data sliders based on certain skills to showcase percentiles for how a player performed. Unfortunately, we can’t do that to Rios because he only played in 32 regular-season games. So, in this case, we will have to do a little bit of sifting through underlying metrics. To make things a little easier, I highlighted a few noteworthy metrics below.

By dissecting the data to these four metrics, we can see that Edwin Rios mashes baseballs. For a point of reference, the MLB average for Barrel% is 6.4%. A barrel is basically an optimal batted ball outcome that has shown a strong correlation with hitting HRs. Rios had a monstrous barrel rate that suggests that the power is real and that more plate appearances could lead to more HRs.

When Rios first popped onto my radar was early 2020 when I noticed his .640 xwOBAcon from the 2019 season. He backed it up in 2020 with a .468 xwOBAcon, which would have been the 25th best in baseball if he qualified. His 2020 xwOBAcon fits in nicely with the likes of Corey Seager, Christian Yelich, and Nelson Cruz.

Last is Hard-Hit% and LD/FB Exit Velocity. By now, we have established Rios can hit the ball very hard, but that won’t do you any good if it’s all hard-hit ground balls. That is where a player’s exit velocity on line drives and fly balls come into play. Rios had an exit velocity of 97.4 mph on all his line drive and fly balls. That is better than everyone on the Dodgers besides Corey Seager(98.3 mph). Yes, better than Mookie Betts, Cody Bellinger, and Max Muncy.

The big difference between 2019 and 2020 is the way Rios was hitting the ball. At a glance, you see he hit far too many balls in the dirt and not enough in the air. When you hit a baseball as hard as Rios does, and as often, more fly balls will produce better results. Yes, I know this isn’t rocket science-hit the ball very hard and in the air will likely result in positive outcomes at the plate.

Rios made some adjustments and did just that in 2020. His ground ball rate dropped nearly 13% while his fly ball rate increased by over 21%. In fact, if you look at all 18 of Rios’ hits, 14 of them were of the extra-base variety-eight HRs and six doubles. Pulled hard-hit fly balls are the terrific batted ball approach for Rios. You can definitely see Rios understanding this and unlocking his power potential.

Up until now, Rios’ profile has looked pretty appealing, but here is where things get dicey. Rios became more aggressive at the plate, with an increase in F-Strike% and Swing%. This could have been by design because pitchers may have been trying to get ahead of him in counts.

His early aggressive swing tendencies caused him to fall behind often in counts. He finished the year with a lackluster 4.8% walk rate and a 21.7% strikeout rate. Those numbers are definitely a benefactor of his 17.7% SwStr%-which would be in the 6th worst in the MLB. Add that he swung at an alarming amount of pitchers outside the zone, and there is cause for concern.

To sum this up, the plate discipline is very scary. Rios is a young player that is having success when he makes contact. So it stands to reason why he would be more aggressive, but the flawed approach could lead to cold streaks with the batting average and on-base percentage plummeting.

Steamer projections have Rios with a .222/.280/.427 slash line in 99 games played. That projection also comes with 18 HRs and 98 Runs+RBI. The range of outcomes on such an unknown player without a guaranteed position is exceedingly hard to place numbers on. I would expect the projections to change closer to Spring Training with a better understanding of playing time.

Edwin Rios reminds me of Joey Gallo; a big power bat that could go through prolonged slumps. The potential is there to put up big numbers, specifically in the HR category. If he gets an everyday role as the 3B/OF with plenty of plate appearances, he could be a useful player.

In the #2EarlyMocks, Rios went as high as 292 and undrafted in one league. His ADP of 345 means he is basically free at the back end of your drafts. There is a built-in floor allowed at that draft pick that should allow you to take Rios. If early in the season, it doesn’t look like he keeps up the power while maintaining the batting average, it’s an easy price to cut ties and move on.