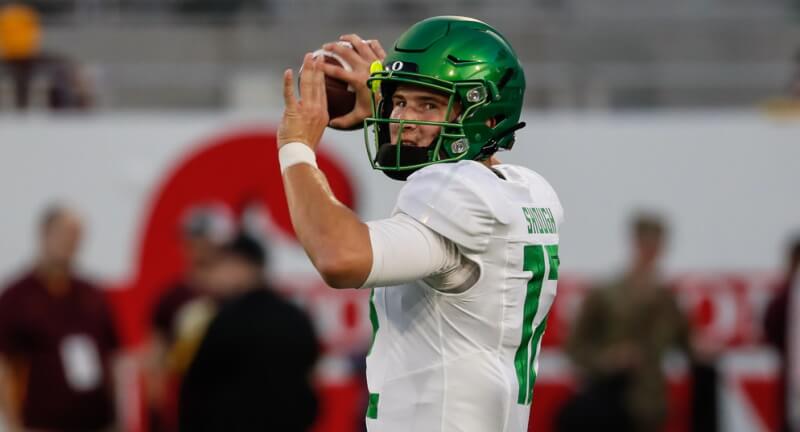 On Wednesday, I constantly received updates in regard to cancelled games because of COVID outbreaks and contact tracing on college campuses. I spent hours probing my rosters for players in postponed games and searching for replacements on the waiver wire. I’m sure there are other CFF diehards in similar situations, and I have done the homework for everyone. I locate the foremost college fantasy football sleepers for Week 11 of the NCAA football season.

After two seasons behind Justin Herbert on the depth chart, Tyler Shough took the reins of the Ducks’ offense and led the team to victory over Stanford. The redshirt sophomore impressed fans, but more importantly, coach Mario Cristobal.

“I thought Tyler had a solid game. His decision-making was solid; a couple of plays he’d like to have back. Thought his decisions in the run game were really good. We didn’t really plan on running him that much, but he ended up running the ball a few more times really effective. Fairly accurate. Created explosive plays that certainly helped generate points,” Cristobal stated (oregonlive.com).

CFF fanatics also took notice and were captivated by Shough’s skills. The Ducks’ quarterback passed for 227 yards, rushed for 85 and totaled a pair of touchdowns. He displayed a strong and accurate arm and guided a balanced offensive attack.

In school history, he was the second player to throw for over 200 yards and rush for at least 80 in their starting debut (Vernon Adams Jr., 2015) and just the sixth quarterback to throw and rush for a score in their inaugural start.

Dual-threat field generals are always a valuable commodity in college fantasy football, and the Ducks’ dynamic playmaker should shine once again on Saturday.

I uploaded this week’s column and profiled North Texas QB Jason Bean as a sleeper. Within two hours, news came down that the North Texas-UAB game was cancelled. Once again, I had to update my sleepers for CFF diehards to acquire.

Brennan Armstrong stands atop the list of available quarterbacks on the waiver wire. In his four starts, the lefty totals over 230 passing and 70 rushing yards per game, averaging over 29 fantasy points. A dual-threat playmaker, the sophomore has scrambled for 287 yards and scored twice on the ground. He has added 985 yards and 10 aerial strikes through the air.

With so many teams and CFF luminaries sidelined this week, Armstrong is an idyllic emergency starter over the weekend. The matchup and Over/Under line foreshadow another productive outing for the Cavaliers’ signal caller.

With COVID cases rising and games postponed across the country, CFF managers are searching for starters at QB: On the waiver wire, Who Ya Got?

I could not believe my eyes when I looked at the low ownership level of Greg Bell this week on the waiver wire. Since the Mountain West kicked off its season, Bell has been one of the top runners in college fantasy football. Over the past three weeks, he is the seventh best ball carrier.

It has been a challenging journey for the Aztecs’ gamebreaker. He went to Bonita Vista High in Chula Vista, California, and committed to San Diego State in 2016. Unfortunately, Bell did not meet the academic standards of the school and went the JUCO route at Western Arizona. After two years, he picked Nebraska but left the program after three games in 2018.

Bell returned home and verbally committed to San Diego State. He endured a serious eye injury in the summer of 2019 and missed the entire campaign. Among his doctors, there was concern that Bell might not be able to play because of the danger of going blind. Finally, he returned healthy to the gridiron before the Pandemic shut down practices.

In 2020, Bell is thriving in the San Diego State ground game. He is seventh in the nation averaging 125.7 yards per game and surpassing the century mark in each contest. Bell has totaled 377 yards and scored four times. He also has eight receptions for 63 yards.

The Aztecs are big favorites over the Rainbows at home, and Hawaii struggles to stop the run. Bell easily earns over 20 carriers and a couple of targets in the game on Saturday.

The Hawkeyes captured their first victory of the campaign last week against Michigan State. It was not happenstance that Iowa won the same game that Tyler Goodson finally surpassed 100 yards rushing.

“This team was very eager to come out and dominate the game. The first drive most definitely gave us the confidence to push through the whole game and go drive for drive for drive,” Goodson asserted after gaining a season-best 113 yards and two touchdowns. (hawkcentral.com).

As a true freshman in 2019, Goodson started four games and led the team in rushing yards (638) and attempts (134). He scored five times and secured 24 passes for 166 yards. In three games this year, the sophomore has gained 233 yards and notched three touchdowns. He has added seven receptions for 67 yards.

The Hawkeyes travel to Minnesota and are road favorites against a powerful Golden Gophers’ passing game. Giving Goodson nearly 20 carries will pave the clearest path to victory for Iowa, and I expect Goodson to surpass 100-yards rushing for the second consecutive game.

With so many games cancelled, CFF diehards are scrambling to acquire a running back for their starting lineups: Who Ya Got on the waiver wire?

“UCF makes it hard to predict who will go off, but I am already starting Greg McCrae. If he is available, pick him up NOW!” @aceholesrule

During the summer of 2019, I identified Emeka Emezie as a sleeper in CFF leagues and drafted him on many of my teams. Unfortunately, he did not meet my expectations. In 2020, he has totaled 27 catches for 465 yards and three touchdowns, which propels him among the surprise wideouts in college fantasy football.

Emezie began the campaign with a reputation for dropping passes but appears to have overcome the shortcoming in his pass-catching abilities. The 6’3” and 220-pounder has been targeted 43 times, corralled 27 throws without a dropped pass, and grasped over 55% of deep throws for 153 yards and a score, according to PFF. As a collegian, the senior has trapped 149 passes for 1,820 yards and 11 scores.

North Carolina State schemes one-on-one matchups deep for their gamebreaker, and the coaching staff is confident that Emezie will win the skirmishes. In three consecutive games, the senior has exceeded 80 receiving yards (87, 84, and 95) and increased his yards per catch from 10.3 to 17.2 this year.

The Seminoles’ defense resembles a sieve and been burned by opponents all year. The Wolfpack have an underrated offense (395 yards and 32.9 points per game) and will put points on the scoreboard. If you need a receiver, Emezie is a sold option still available in the majority of CFF leagues.

My interest in the Hoosiers’ offense began while scouting QB Michael Penix, Jr. During the course of the opening three contests, his pass catchers have intrigued me more and more. Whop Philyor leads the Indiana WR corps, but Ty Fryfogle deserves more attention from the CFF community.

A senior, Fryfogle’s ascent follows an offseason of dedication and commitment. “He (Fryfogle) is exactly where he needs to be. He worked his butt off in the offseason. Even though he was not here, down in Mississippi they did not really think [COVID-19] was real, so he was out there working out. He got his work in. Every day I talked with him and he was at home, he was outside working out,” Indiana wide receiver coach Grant Heard detailed (hoosierhuddle.com).

At 6’2” and 214-pounds, Fryfogle posted a solid junior campaign last year with 45 catches for 604 yards and three touchdowns. This season, he has secured 13 passes for 224 yards and two touchdowns, including a huge game against Michigan with seven receptions for 142 yards and a score.

The Hoosiers travel to Michigan State in search of their fourth victory. The Spartans surrendered 38 (Rutgers), 27 (Michigan) and 49 (Iowa) points to open the crusade while allowing 377.7 yards per game. Indiana will surely have success in the air against Michigan State, and Fryfogle provides CFF managers a last-minute replacement at wide receiver.

With so many games cancelled, CFF diehards are struggling to find a wide receiver for their starting lineups: Who Ya Got on the waiver wire?

“SJSU is a nice offense and getting a piece of it, especially in a week like this, is a good idea.  Go get Bailey Gaither.” @aceholesrule