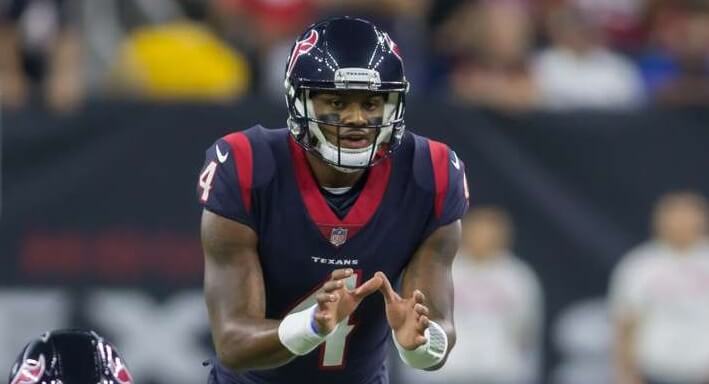 It’s that time of the year for dynasty players to rejoice. While we all enjoy the regular season, the offseason is what separates dynasty leagues from your typical redraft or keeper league. Dynasty leaguers have to constantly keep up with information year-round. That is why we at FantraxHQ are here to help by releasing our Dynasty Rankings in January, and I’m kicking things off with our 2021 Dynasty Quarterback Rankings.

Say what?! Your dynasty football league didn’t use Fantrax in 2020? Unthinkable! Check out all the features Fantrax has to offer, and we think you’ll be singing a different tune for the coming season.

Quarterbacks To Own in Dynasty Leagues

Outside of the two most obvious candidates (Patrick Mahomes and Josh Allen), here are some other quarterbacks to own in your dynasty league.

Without a doubt, Deshaun Watson is one of the best quarterbacks in all of football. After all, the 25-year-old Clemson product has reeled off three consecutive seasons of top-five finishes at quarterback. In 2017, his rookie season, he led all quarterbacks in points per game before an ACL injury knocked him out halfway through the season. Yeah, he’s good.

Perhaps the only quarterback with a higher floor is Patrick Mahomes. With that said, Watson’s floor is not far behind. Factoring in the safety of his 4-year, $156,000,000 contract, Watson should safely be picked as a top three quarterback in dynasty leagues.

Have yourself a rookie season Justin Herbert. Seemingly defying all odds, Justin Herbert put together one of, if not the best rookie seasons we have ever seen from a quarterback. The 22-year-old had quite the final line in his inaugural NFL season.

That line was good enough for a top-10 finish among all quarterbacks. An insane finish for a rookie quarterback who didn’t have ample time to prepare for the season. Also, he wasn’t even the starter after the first game. It took an incident with Tyrod Taylor for Herbert to get his opportunity in Week 2, and he never looked back. If the price is fair, Herbert should at least return market value in dynasty leagues going forward.

Depending on the owner in your league, Joe Burrow’s current value may not be lower than it is until he hits his mid-30’s. The 2020 number one overall pick had an up-and-down first season. Depending on league setting, Burrow finished around the QB18 in terms of points per game. Clearly, that is not spectacular, but there was a primary reason behind that. His offensive line play.

Cincinnati has one of the worst offensive lines in football, that is no secret. Despite only playing in 10 games, Burrow was sacked the 10th most times compared to his fellow quarterbacks. Add in his backups’ sack totals to finish the year, and the Bengals gave up 48 sacks, which would have ranked third in football. Ultimately, it led to Burrow taking a sack in Week 11 and tearing his ACL. He was having himself a solid game against Washington when he went down with the torn ACL early in the 3rd quarter, which also hindered his PPG totals.

Undoubtedly Cincinnati will shore up their offensive line issues now that they have their franchise quarterback and running back locked up to big contracts. NFL teams like protecting their investments. If fantasy managers can find a way to invest in the 24-year-old future stud, do it now while the stock is lower.

Quarterbacks To Sell in Dynasty Leagues

This is the reality of dynasty leagues and why it defers so much from real-life football. If you want to continually stay competitive, you sometimes have to sell your best assets before they hit their end-game age. Russell Wilson may not be there yet, but he is rapidly approaching the gray area of being dubbed an “old” quarterback. Wilson has been the model of consistency going on nearly a decade now and has really stepped it up the past two years. The 32-year-old has finished as a top-five quarterback for two consecutive seasons.

The news that Pete Carroll still wants to be a smash-mouth football team going forward, despite the departure of Brian Schottenheimer, is of huge concern. “Let Russ cook” was not a popular slogan for no reason. Critics have always questioned if Russell Wilson was being held back. Well, it sounds like critics will continue to critique.

While you may not be able to sell him in the offseason due to his age, the perfect time to sell is mid-to-late season to a contending team. However, if you do find someone willing to buy, I would be looking to move on from Wilson. Early future picks, any of the above buys, or the incoming tandem of Trevor Lawrence and Justin Fields would be ideal.

This one may get a lot of heat from his advocates, but Jalen Hurts is easily a dynasty sell to me. This take could wind up blowing up in my face, but I am simply not comfortable holding what appears to be a backup quarterback heading into 2021 (and possibly beyond). If you want to bet against the new Eagles regime and Carson Wentz, that’s fine. However, I am of the opinion that while Hurts is a dynamite athlete at the position, he simply doesn’t have the throwing ability to stay relevant in the NFL for years to come.

Could there be a Lamar Jackson or Cam Newton-like season for Hurts in the future? It’s possible. But he isn’t the level of athlete of Jackson, and that rushing upside isn’t there with the Eagles 2020 2nd rounder. Newton is a more realistic comparison, but even then Hurts standing at 6-foot-1, 218-pounds won’t hold up long-term with that running style. That means he needs to refine his passing to stand a chance. If there is a Jalen Hurts supporter in your league, sell, sell, sell.

While Jared Goff’s value may not be way too high, I am extremely concerned that he isn’t the long-term answer in Los Angeles. While he does have a contract through 2024, Los Angeles does have a potential out in 2023. That will be Goff’s age 29 season, and if recent trends continue, Sean McVay and company may turn to a player that provides higher upside.

Even if they do feel comfortable with Goff and resign him, the Rams seem to be trending towards being a run-first, ground-and-pound style team with Cam Akers in the backfield. While that can change quickly for a variety of reasons, Goff doesn’t provide comfort as a mid to high QB2.

Without further ado, here are the dynasty rankings for the top 40 quarterbacks as of January 18th, 2021. Note that this is pre-free agency, and pre-NFL Draft, so this list is subject to change vastly. The 2021 rookies in the top 40 are ranked based on their most common landing spot in mock drafts. These players’ rankings will fluctuate as well.