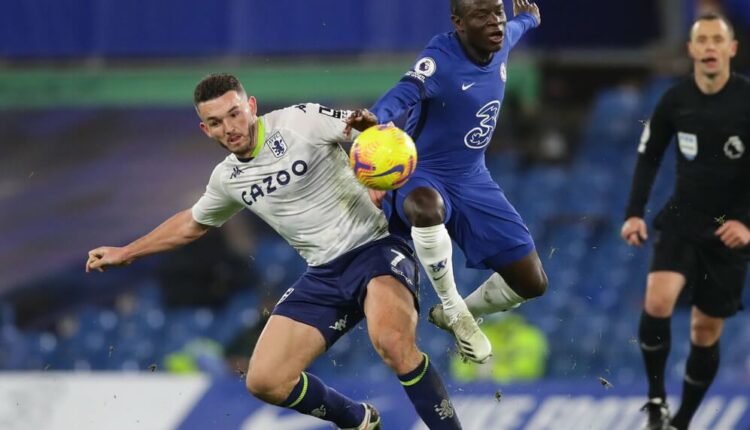 Getting your team selection correct in Draft Premier League is just as essential as your pre-season draft or your weekly waiver wire claims. And that’s exactly why we’re here to help with our Gameweek 38 Start and Sit article! We’re here to help you with some of the big Fantasy EPL decisions you may need to make for the upcoming fixtures. 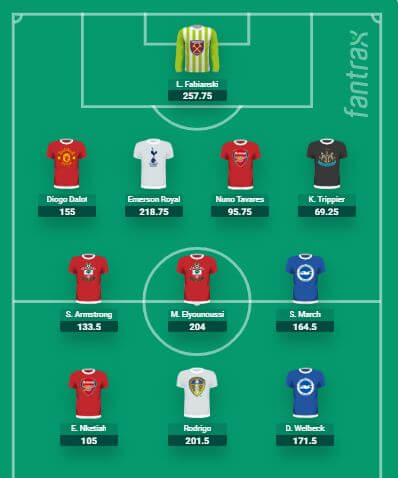 Finally, gameweek 38 is upon us. A wild and whacky 21/22 season, full of postponements and DGWs, ends in a SGW where every team plays at the same time. A little bit like how it used to be, right? Anyways, for those vying for their league title, whether in the table or in the playoff championship, we’re looking for under-rostered, usually under-appreciated options to start alongside our certified studs that got us so far (or not) this season. In defense, we have 3 wide backs for (traditionally) top 6 sides in Emerson Royal, Dalot, and Tavares. Each has pretty favorable matchups in Norwich, Crystal Palace, and Everton respectively. Their clean sheet odds are 41%, 26%, and 40%. Dalot has the hardest matchup (Palace) of the 3, but is probably the best fantasy player too, scoring 9.5 ghost points per start. Alongside them, we have the long-awaited return from injury of Kieran Trippier, who lit up the league upon his transfer to the newly-rich Newcastle and should do plenty against a Burnley side, desperate to avoid relegation. He has 26% clean sheet odds but should put up plenty of other stats like he normally does from his work rate and likely monopoly on set pieces.

In midfield, we’re backing two Southampton players, who face the surging, albeit still poor defensively, Leicester City. Neither player has started consistently as of late, but both ended their last game vs Liverpool on Tuesday. We’re backing both to put up a healthy dose of offensive stats vs the Foxes. There are certainly better options out there, but we have a feeling these two won’t be rostered yet when you’re in need of some midfield bodies. Next to them, we have another solid floor, with some upside options in Solly March vs West Ham. In attack, we like Arsenal’s Nketiah, who is 44% likely to score against Everton. Arsenal needs goals badly and Everton is on the beach as of yesterday, so logic would suggest Arsenal is likely to score multiple. Logic doesn’t always apply to Arsenal (or Spurs) however. One to watch on the final day, certainly. We also like the red-hot Danny Welbeck, who despite scoring 15.5, 9, 27, and 18.5 in his last 4 starts (the last 4 gameweeks) is still only 27% rostered. Finally, we have Rodrigo, who’s had many ups and downs and multiple inclusions (some successful, others not) in this article this season. He faces Brentford, in a game where Leeds will be desperate to get a result, to avoid relegation. I expect a significant amount of attack from Leeds and Rodrigo should be at the heart of it. He’s 19% to score and 16% to assist. 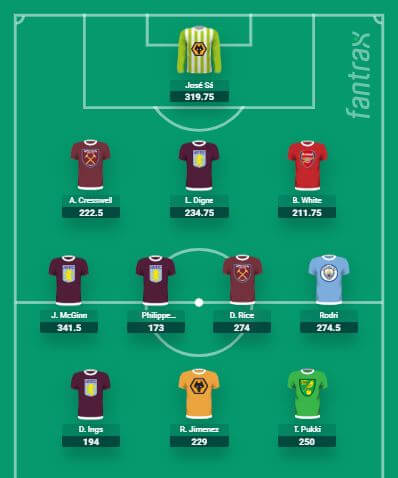 On the opposite side of things, what players should you bench and possibly outright discard this week (if you have the heart to let go of your beloved players) in favor of some potential last-week streamers? Well for one thing, pretty much any player you have on Aston Villa and Wolves. Those 2 teams have the unfortunate task of facing Man City and Liverpool in games where their opponents are vying for the title. Digne, Coutinho, Ings, and McGinn (in particular) may have served you very well the last few gameweeks, particularly during their DGWs, but its time to think with your brain and not your heart. Manchester City is a dominant side that keeps the majority of possession in all their games, is 94% likely to score vs Villa, and is 49% likely to not let them score. The odds are heavily, heavily stacked against Villa players succeeding this week. You’re gambling on an attacking return or clean sheet that likely will not come. Raul Jimenez fits into the same category vs. Liverpool. He may have scored 8 ghost points against Norwich, but the Reds are at the opposite end of the table and he’s only 16% likely to score a goal.

We’d also recommend benching the banged-up Ben White who may or may not play, but is a lost clean sheet away from a stinker, as well as Aaron Cresswell, who faces Brighton and has been on a torrid run of performances, outside of Norwich. Rodri and Declan Rice are our normal recommended sits, in that they’re still far too highly rostered for being high-ceiling, low-floor players. And I know that Rodri has 4 attacking returns in 5 games! But such returns are very unlikely for a defensive midfielder like himself, and the oddsmakers suggest that, giving him a 15% chance t score and a 10% chance to assist. Finally, we have Teemu Pukki of Norwich. Pukki has actually had a pretty solid spring, scoring the majority (5) of his team’s goals, despite their continued rough form/quality. Arsenal fans will be begging for 1 more moment of glory for Pukki in the Prem, but outside of a goal (30% to happen), you’re clutching straws when it comes to other stats and points accrued for the Canaries’ talisman.

It has been a pleasure writing Start/Sit this season and I hope you enjoyed and found some decent advice from time to time to help you this season. Until next time!