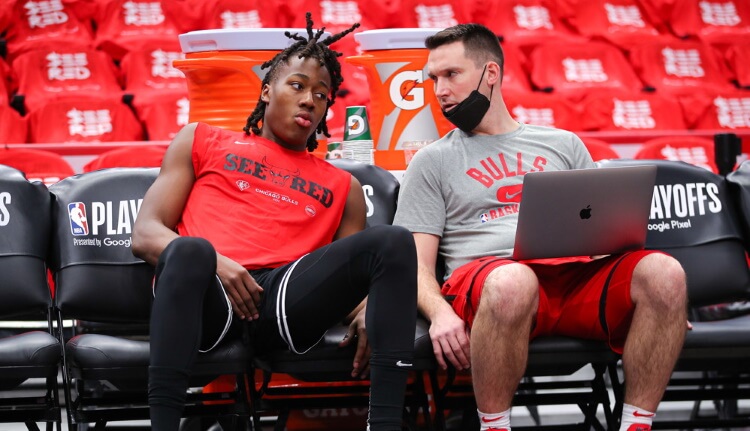 The East. Where (I believe) the NBA Champion will be crowned. Some people might be enjoying the NBA playoffs without a care in the world, but here at FantraxHQ, we’re WORKING! With the NBA Conference Finals in the East and West underway, let’s take a look at the eliminated playoff teams and highlight one low-owned target you should have your eye on with offseason moves and draft picks in the future. For this article we’ll break down the East. Check out the West Edition as well to get the full picture.

This is less about McDaniels and more about Miles Bridges and Gordon Hayward. Not only has Hayward had injury troubles the past few years of his career, but he’s also been rumored to be unhappy with his fit in Charlotte, and MJ may look to find a trade partner for him. Further, Miles Bridges turned down a low-ball extension offer and played himself into potential max money. With that, McDaniels’ role opens up. He’ll be in his fourth year in the league next year, and Charlotte will look to see what they have in him, as they’re ready to take the next step in contending for rings. LaMelo will be part of the core, but he’ll need new running mates. Perhaps McDaniels steps into some usage.

Jalen Johnson may be stuck in a super depth role (disappointing because he’s so talented), and Delon Wright isn’t necessarily low-owned. You’ll likely look elsewhere for your dynasty targets.

Isaac Okoro is the next Cav I could see taking a huge step. Allen and Mobley are making their twin towers role work. Lauri Markkanen has finally found a team that will use him correctly (a SF with C height), and Garland and Sexton are locked into their backcourt roles. That leaves Okoro, as the front-court depth, but he hasn’t developed into much of a scorer quite yet. I don’t see that in his future, to be honest, so it’s hard for me to recommend him in dynasty leagues.

I’ve been beating the Cam Thomas drum all year. With James Harden shipped to Philly, and the Nets getting bounced in the Playoffs, it’s clear that the Nets need scoring and defense. They’ll have Ben Simmons next year to help them on the defensive end. He’s a switchable defender that will challenge for an All-Defense First Team Award. He’s not there to get buckets, though. That’s where Cam Thomas comes in. His three-point shooting can and will improve, but he averages 18 points per 36 minutes. Expect a new (25+ minute) role for him in his sophomore season.

It’s hard to believe that Zach LaVine will leave the Bulls’ Playoff caliber team for greener pastures, but the rumor mill is saying that’s exactly what he might do. He was injured enough this year that we got to see what this team looks like without him, and Ayo Dosunmu was the biggest beneficiary. He’s a two-way guard, which helps with the steals category, as he averages 1.5 STOCKS (steals + blocks) per 36 minutes, but he’s also a capable offensive threat with 12 points, 4 assists, and 4 boards in the same per 36 metric. His sophomore season won’t bring him more usage, as he’ll still cede usage to DeRozan and Vuc, but it’ll likely bring more minutes.

Honestly, the Raptors draft so well that none of their depth pieces this year intrigue me. I’ve beaten the Chris Boucher drum for a couple of years now, but he’s pretty solidly owned because of his per-minute totals. Precious is an intriguing piece, but I don’t believe in his offensive prowess enough to recommend him (though he’s had some solid games scoring around the rim). We’ll revisit this team after the draft.

With Joel Embiid missing time, Reed made a name for himself in the Playoffs. The downside to Reed is that he fouls so much that Doc Rivers couldn’t start him. DeAndre Jordan is cooked defensively, so I doubt he’ll be back. That gives backup Center minutes to Paul Reed, and Embiid will also have his share of rest/injury games, which makes Reed even more valuable. If he can get his foul trouble issues fixed, he can be a fantasy darling. Per 36 minutes in his career, he has averaged: 15 PPG, 11 Rebs, 2 Asts, and FIVE STOCKS! FIVE! He’s a force. We just need him to stay on the court.

For my money, this team goes about three deep in fantasy: Jrue Holiday, Khris Middleton, and Giannis. Everyone else you just have to hope they have a big night: Grayson Allen, Pat C, Matthews, Ibaka, etc. Let’s revisit this team after the draft/offseason moves.