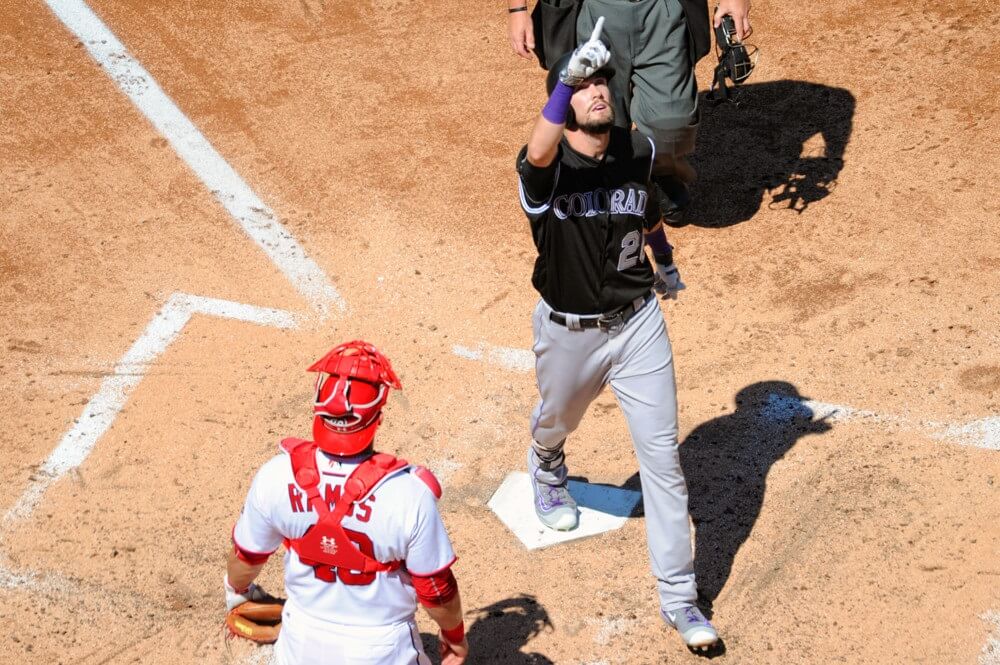 Last time out, we were nothing but positive as we went over my Outfield Dudes for 2019. Well, guess what Sonny Jim Bob, life ain’t all sunshine and rose petals adorning your bathtub after a long hard day of filing TPS reports! Sometimes we have to throw some shade. These outfielders are very much in the shade in my estimation, set to lose value from their Fantrax ADP. All three are currently being drafted inside the top 35 outfielders because I’m not here to tell you to avoid players who are already coming cheap. Let the hatred commence!

The regular season is less than two weeks away! Don’t worry, there’s still time to add that “one more league!” Leagues are still forming at Fantrax.com, so head on over and jump in one today.

Mitch Haniger was a big profit turner in 2018, piling up 183 R+RBI, 26 homers, eight steals, and a solid .285 average. The magical age-27 season strikes again. He basically repeated his 2017 numbers over a full season, flipping the bird to everyone who cautions against extrapolating a bit more than half a season. His skill set doesn’t exactly set the world ablaze, but it’s still a very useful one. So why does he find himself on the Don’t list? And why do I wake up at night in a cold sweat shouting “Ditch Mitch!!”?

Frankly, that last question is probably best left for a therapist. However, I can rationalize why I won’t have any Haniger shares this season. One primary reason is that the Mariners offense is set to take a step backward. There’s little doubt Haniger will be hitting in the heart of the lineup day in and day out, so there is something to be said for the floor there. Will he repeat his aforementioned 183 R+RBI,  though? To me, it’s unlikely.

Also feeding into the potential drop in counting stats is a looming batting average regression. While his batted ball profile isn’t one that tends to hurt BABIP, his 37.1% hard contact rate isn’t especially impressive. He has a career .329  BABIP over 287 games, which is plenty enough to just throw your hands up and admit he can sustain a plus BABIP. That said, he has a lot more batting average downside than upside. He could easily be a .260 hitter, which isn’t what you want from the 18th outfielder off the board. He doesn’t steal enough bases to offset a dropoff in the other four categories, either. Even in the early rounds, I want upside.

If moderate power with decent R+RBI and a batting average that won’t kill you is your type of thing, well, that’s pretty easy to come by later in drafts. Here’s a short list of a few of the other outfielders who THE BAT projects to have similar numbers, along with their ADP. I’ll let that speak for itself.

Are we really drafting David Dahl as a top 25 outfielder based on half a season? Or, more specifically, one crazy month of production? Nine of his 16 home runs came in September against a diluted pitcher pool. I’ll admit, I was completely stunned when I first saw how high Dahl was bring drafted this season. That said, how hard can I really pan a starting Rockies hitter?

It turns out – pretty hard. He does indeed have the Coors factor providing some floor, and we know he’s got the potential to give you five-category production. What we don’t know is if he can really put together a whole season. Dahl has been plagued by injuries season after season, and even last year he managed just 96 games between Triple-A and the majors. The injury risk alone is enough to scare me off of his OF21/ADP90 price tag, but there is plenty more that concerns me.

While Dahl posted a solid .273 average that wasn’t just buoyed by some astronomical BABIP (.311), he made just 71.8% contact. That doesn’t bode well for a plus average, so you’re hoping Coors Field helps him hit .270 instead of .240. While Dahl has a few 20+ steal seasons under his belt in the minors, he was just 6-9 in SBA last season. Whether he’ll risk further injury by attempting steals is a legitimate question. He also has a modest .710 OPS against lefties in his very scant career, so a platoon of Dahl is a possibility. I’ll avoid the risk here with Dahl and wait for the similarly projected Andrew McCutchen 56 picks later to give me a safer floor.

I don’t like putting David Peralta on this list because he helped me out a lot in 2018. Sorry Davie P, but the past is the past! To be successful at this little game of ours, we have to use our heads and not our hearts. Peralta adjusted his swing last season and hit for far more power, tying with Eugenio Suarez for the second-highest hard contact rate in baseball at 48.6%. Matt Carpenter was the only player to make harder contact at 49%, for those of you who can’t stand not knowing the answers to such things. He pulled more balls as well, and Humidor be damned, he hit 30 home runs for the first time in his career at age 30. 30 for 30? Someone call ESPN.

However, Peralta finds himself on this list due to some real warts. Ok, not real warts on body parts…I mean, maybe he has some, I really don’t know. No, these are metaphorical warts that cannot be cured by a simple topical cream. While the home runs were impressive, he’s unlikely to repeat the very elevated 23.4% HR/FB rate from last season. His Statcast xwOBA was .017 points below his actual wOBA, further indicating that he over-performed. The Diamondbacks are set to be a much worse offense in 2019, making another 162 R+RBI season a lot to ask for.

Further compounding that unlikely upside is a serious platoon potential now that Adam Jones is in the outfield mix. Peralta has always been bad against lefties, and even last year hit only .237/.294/.399 against them. While Jones isn’t the perfect fit, he’s immediately a better option than Peralta. Fewer trips to the dish means fewer chances to provide R+RBI. On the bright side, the overall batting average could look even better without those gross lefty-on-lefty plate appearances. There isn’t much speed to speak of though, giving Peralta more downside than upside at OF34/ADP126. They don’t make a topical cream for downside.