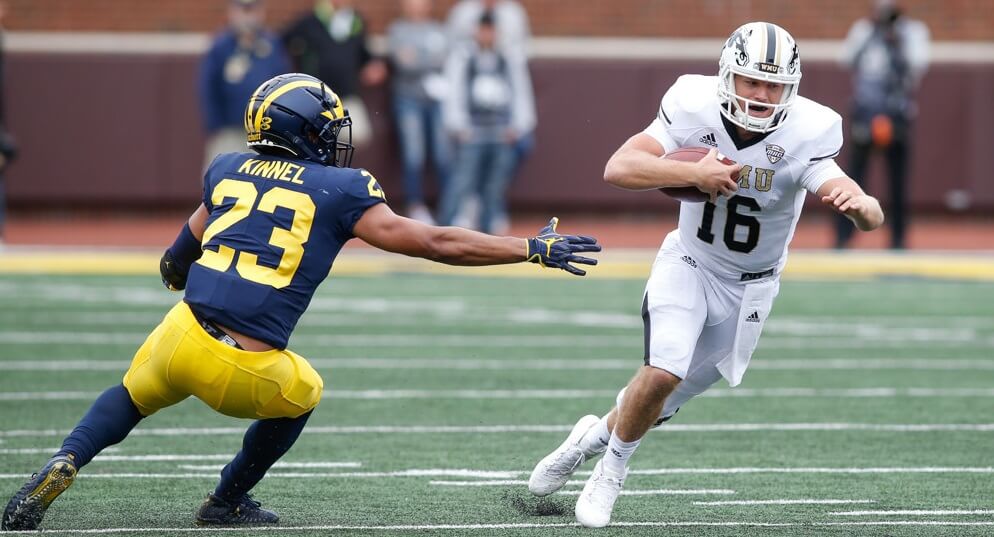 John Laub presents the Scholar’s Surreptitious Starters, a look at the top college fantasy football sleepers for Week 3 of the NCAA Football season.

One of my favorite UConn games that I attended at the Rent in West Harford unfolded when Western Michigan visited in 2011. The Broncos won the game 38-31 on a touchdown pass with less than two minutes on the clock.

For three seasons, I drafted and scouted Western Michigan receiver Corey Davis and have enjoyed watching the Broncos put points on the board over the past decade. On Saturday, I am looking forward to the game between the Broncos and Panthers and fantasy diehards should be making an investment in this contest.

I am surprised that Jon Wassink is owned on so few teams. Last week, the Western Michigan offense was overmatched at Michigan State 51-17. “He (Wassink) made reads, he made throws. They (Spartans) were bringing three or four different things off the edge cap blitzes and he was diagnosing them and getting rid of them before he got hit. I’m sure there were a couple of decisions by Jon, a couple of throws that he wishes he had back,” coach Tim Lester stated in the detroitnews.com by David Goricki. The Broncos will surely get back on track versus Georgia State at home, and I expect Wassink to produce well over 25 fantasy points in the matchup.

After only two weeks, it is crystal clear that UMass is a defense to pick on all season. The Minutemen have surrendered 92 points already and rank among the bottom defensive units in the FBS. Charlotte hosts UMass as huge favorites, and I am always looking to take advantage of a bottom dweller on the road.

Very quietly, Chris Reynolds has posted numbers among the elite quarterbacks with over 60 fantasy points in two games. A dual-threat athlete, the sophomore has totaled seven touchdowns (2 rushing), passed for over 400 yards, and rushed for more than 100.

A former walk-on, Reynolds battled grad transfer Brett Kean for the starting position throughout training camp and didn’t even start the opening contest of the campaign. “I’ve always had a chip on my shoulder since I was in high school. It’s the same thing. Just got to play ball and have fun with it while I’m doing it,” the redshirt sophomore proclaimed in a recent interview with Benjamin Robson.
Reynolds earned the start against Appalachian State and passed for 296 yards and four touchdowns. I expect Reynolds to remain hot against UMass, and he is a solid acquisition for CFF owners in need of assistance at the position.

During the summer of 2018, I promoted Lawon Pass as a sleeper in college fantasy football following the departure of Lamar Jackson. Unfortunately, he failed to reach my lofty expectations. Against Notre Dame two weeks ago, Pass impressed me, and he followed up the performance with another solid outing versus Eastern Kentucky. The junior dual-threat has exceeded 22 fantasy points in both games this season and totaled six touchdowns.

Pass is determined to prove the doubters wrong and even set a career-high with four aerial strikes last Saturday. “He’s gotten in a good groove. I’m proud of how he played … We’re not there yet, but we’ll continue to work. Hopefully, it will give him more confidence going into next week,” coach Scott Satterfield stated after the game in the journal-courier.com. As the Monkeys famously sang, I’m a Believer in the Louisville playmaker and CFF fanatics should be too this year.

College programs recruited Jaret’s twin brother James, a linebacker, and largely ignored the running back in the family. Buffalo could not offer both siblings a scholarship in the fall of 2017 and suggested that Jaret delay enrollment until the spring of 2018.

Before attending school, James decided to wait for his brother on campus and enjoyed a Grayshirt season. “There were a lot of emotions in this journey, and a lot of obstacles. Jaret went through every one, and I went through all of that, along with him. Staying together, working, closing out all the outside noise and just stay focused. I wasn’t going to leave my brother, for anything. My family always taught us to stay together…I’m his keeper. He’s my keeper,” James said of the journey in the buffalonews.com before kickoff to the 2019 crusade.

Last year, both finally dressed, and Jaret took advantage of the opportunity. He rushed for over 1,000 yards and scored 14 touchdowns. CFF diehards are pumped that Jaret and James both suit up for Buffalo, and I anticipate that Jaret rambles for over 150 yards and two touchdowns versus one of the worst run defenses in the nation.

It has not been a good start for Deon Jackson this year. Opponents, game script and a new scheme have not favored heavy usage for the sophomore ball carrier. Alabama overpowered Duke two weeks ago 42-3, and North Carolina AT&T—an FBS program—did not provide a arduous challenge as the Blue Devils won easily 45-13. With quarterback Quentin Harris directing a fresh wrinkle in the attack, Jackson and Harris both have 23 rushing attempts.

If the Blue Raiders hope to slow down coach David Cutcliffe’s scheme, the defense must impede Harris, who accounted for five touchdowns against North Carolina AT&T. With the defensive attention focused on the Duke quarterback, there should be plenty of open lanes and opportunities for Jackson to exploit. Vegas does not expect a shootout between the teams, but I disagree as the offenses combine for more than 60 points, and Jackson notches over 20 fantasy points.

Why do people still believe that West Virginia is a competitive team? The Mountaineers barely defeated an FCS program, James Madison, and were bludgeoned by Missouri last week. I expected North Carolina State to be a bigger favorite over West Virginia this weekend. The Mountaineers have surrendered 4.12 yards per carry and allowed over 200 yards per game, which indicates a big day on the ground for the Wolfpack.

A true freshman, Zonovan Knight has stepped into the spotlight for the Wolfpack. Nicknamed “Bam,” he leads the team in carries (27), yards (161) and rushing touchdowns (3) while averaging 6.1 yards per attempt. “I thought he had a big head this summer and read his press clippings too much. Our defensive kids got after him and put him back in his place…He runs hard and drives his legs on contact,” coach Dave Doeren detailed after last week’s 100-yard performance against Western Carolina in the fayobserver.com.

CFF managers are delighted that Knight did not let press clippings and public praise inflate his ego or deter his game. One of my opponents picked up Knight on the waiver wire this week and inserted him into his lineup against me. Ugh! I’ll gladly take the loss if my readers grab the rising star this weekend.

In coach Mike Leaches’ Air Raid attack, fantasy owners became accustomed to prolific receivers. Regrettably, over the past two seasons, the Cougars’ receiver corps has been a Gordian knot for college fantasy zealots. Last year, no flanker exceeded 825 receiving yards, and RB James Williams paced the team in receptions with 83.

After two weeks into the campaign, Washington State has outscored their opponents 117-24 and three quarterbacks have combined for 11 aerial strikes. I had to look at the statistics to get a handle on how the targets were allocated. To my surprise, Brandon Arconado garnered 16 targets, which is the second-most on the team. Furthermore, he leads the club in catches (14) and receiving yards (193).

Who is Arconado? Buried on the roster, the redshirt senior had only corralled four passes for 73 yards during his campus tenure before this year. He climbed the depth chart during the offseason and now starts at the “Y” position. “It’s been kind of rough, because we (Gordon and Arconado) both came in at the same time and we’re both junior college kids…we were both bottom of the totem pole. It’s been a struggle but we learned a lot from people in front of us, because they were really, really good players. But it was also fun watching them and learning from them and trying to use what they did…finally, we’re getting our opportunity to shout out,” Arconado said in the unionbulletin.com. I am always looking for bargains in high-scoring games, and Arconado deserves to be rostered and started on Friday evening versus Houston.

Coach Mack Brown and QB Sam Howell have guided the Tar Heels to a 2-0 start. More impressively, North Carolina has not beaten cupcakes: Both South Carolina and Miami fell to Brown’s squad. “We were excited…So excited. It was like a party,” Dyami Brown said after the victory over Miami in the dailytarheel.com game review.

Howell has been efficient with a 182.9 QB ranking and 4-0 TD:INT ratio. One of the biggest beneficiaries of the improved aerial assault has been WR Dyami Brown. The sophomore has blossomed and leads the club in nearly every receiving category: 11 targets, 8 catches, 149 yards, two touchdowns and a 24% target share. At 6-foot-1 and 195 pounds, Brown reaches top speed rapidly and employs good body control with strong hands to snatch the football out of the air. A good leaper, he uses his speed and size to provide Howell with a dependable asset down the field.

The Demon Deacons have been one of the most explosive offensive units in the country and Vegas predicts another high-scoring contest against the Tar Heels. Wake Forest can easily be beaten in the secondary, and Howell will surely target his favorite playmaker all evening. If you need assistance at wideout (or flex), Brown is a great option to acquire.

I’ll never forget reading Robert Frost’s poem “The Road Not Taken” in middle school and it has impacted my life ever since. Whenever I have made a major life decision, I have chosen an alternative route and rarely looked back. Analyzing Kekoa Crawford’s resume, Frost’s classic work immediately came to mind.

The redshirt junior has taken a far different path to prominence at California. He enrolled at Michigan and remained on campus for two years, catching only 21 passes for 290 yards and two touchdowns. In the fall of 2018, he transferred to Glendale Community College but did not play football. Finally, he landed at California and has made an impact in the first two games this season. Against UC-Davis last week, Crawford scored twice. He also has corralled six passes for 132 yards this year and leads the team in targets (10) and target percentage (29%) after two weeks.

The Golden Bears host the Mean Green and will easily put points up against one of the worst defenses in the FBS. North Texas surrendered nearly 300 yards passing and three touchdowns versus SMU last week. I expect Crawford to enjoy another productive afternoon.

Fantrax was one of the fastest-growing fantasy sites of 2019. With multi-team trades, designated commissioner/league managers, and drag/drop easy click methods, Fantrax is sure to excite the serious fantasy sports fan – sign up now for a free year at Fantrax.com.