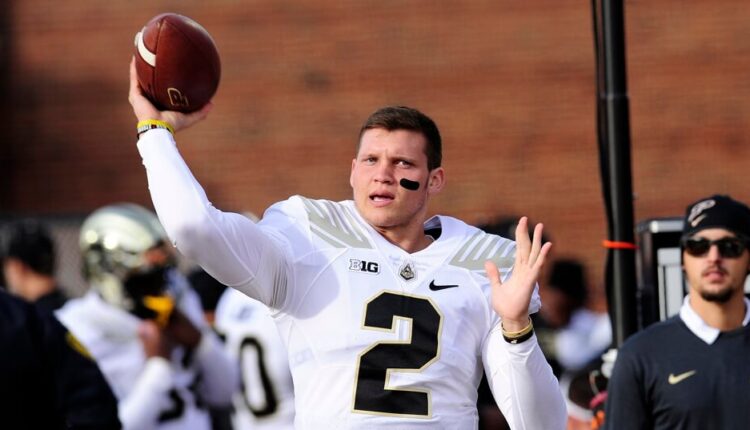 Get off the sideline and join a College Fantasy Football League on Fantrax this season. It will be one of the best decision of your life.

I am naturally inquisitive and reflective, and as a history teacher, I pursue multiple perspectives and seek to improve in the classroom every year. As a CFF analyst, I incorporate the same yearning and acumen into my player rankings and am willing to admit an oversight on my prognostication. In over a decade of playing college fantasy football, my omission of Elijah Sindelar as a possible starter rankles me. I never foresaw his success all summer. He ranks second at the position with 89 points, trailing only Jalen Hurts.

A fifth-year scholar, Sindelar is a team co-captain for the second consecutive campaign despite only starting nine games since enrolling at Purdue. In 2017, he passed for over 2,000 yards and 18 touchdowns; however, last year he sat behind David Blough. Sindelar has sparkled given the opportunity to lead the Boilermakers. He became the first Purdue quarterback since Drew Brees in 1998 to pass for over 400 yards in consecutive games and the first to eclipsed 500 yards and five touchdowns since Kyle Orton in 2014. “I think our offensive line did a great job keeping Elijah protected and our receivers did a great job as well…That’s probably the best game I have seen him throw the rock. He was zipping it in when he needed to, he was putting air under when he needed to. He’s a smart player, he’s athletic and I put my trust in him.” said tight end Brycen Hopkins after the game in purduerivals.com by Tom Dienhart.

The Purdue schedule foreshadows continued production for the passing game with Minnesota, Maryland, Illinois, Nebraska and Indiana on the docket. Sindelar is clearly worth obtaining on CFF teams for the remainder of the year. — John

After what I saw of Asher O’Hara last season, I wasn’t touching him or Ty Lee in any drafts. Two weeks in, I’m wishing I had gotten Lee because O’Hara is a lot better than I anticipated. Across two games, O’Hara has amassed 584 passing yards, 135 rushing yards, and seven touchdowns. He is the eighth-ranked fantasy quarterback, and he had to go up against Michigan in his debut.

O’Hara is almost completely unowned, and he has an easy C-USA schedule after taking on Duke and Iowa. His playoff matchups feature games against Old Dominion and Western Kentucky, both of which have shootout written all over them. Go snag O’Hara and reap the long term benefits of his talent. — Justin

Looking over the Top 20 CFF signal callers, Drew Plitt stands out among all the great performers after two weeks. He ranks ahead of Tua Tagovailoa, Spencer Sanders aNd Alan Bowman with 67 fantasy points scored. Plitt has tossed eight touchdowns and passed for 737 yards. At 6-foot-2 and 215 pounds, the redshirt junior was named the Ball State Ray Louthen Award as the team’s most improved player last year after taking over for the injured Riley Neal during the final three games.

The Cardinals have scored 81 points behind Plitt’s excellent passing. Against Fordham on Saturday, he nearly broke the program’s single-game passing record with 439 yards and six touchdowns. With Plitt, RB Caleb Huntley, WR Riley Miller, and WR Antwan Davis, coach Mike Neu can attack opponents in diverse formations and schemes. “We have a lot of weapons. It’s awesome to see everybody involved with scoring because I know they can do it. It happens in practice all the time. The game is a proving ground, and that’s what we did today,” Plitt stated after the game in ballstatedaily.com by Connor Smith. The MAC Conference provides plenty of tasty matchups every season, and Plitt is worth stashing on rosters. — John

Georgia State made a splash last week by supplying rocky top with a rocky start and followed up a big program win with a close victory over the Furman Paladins. The largest contributor to the Panthers success is quarterback Dan Ellington, who proved fantasy relevant last season with 625 yards on the ground and 2,000+ passing yards.

This season, the former JUCO quarterback is on pace for huge numbers after accumulating 501 passing yards, 147 rushing yards, and seven total touchdowns. The great thing to note about Ellington is that he’s producing at such a high level with the hardest game on his schedule in the rearview mirror. Expect big numbers against Appalachian State, Arkansas State, Western Michigan, and UL-Monroe. — Justin

Twitterverse on Fire!
Identify the team offense that has surprised you the most after two games of the season?

“I haven’t watched the Terrapins yet, but the points Maryland are posting have my attention.” @jmadincea

College fantasy football forces participants to scrutinize every box score in order to find a waiver wire gemstone. Last year, Coastal Carolina played football at the FBS level for the first time. On Saturday, the Chanticleers defeated Kansas, a Big-12 foe, and C.J. Marable scored the team’s game-winning touchdown. He finished the evening with 168 yards from scrimmage and crossed the finish line twice. After two weeks, Marable is the seventh most productive ball carrier in CFF with 52.1 fantasy points.

As a freshman in 2017, he earned First Team All-Big South (FCS) with 1,038 rushing yards and six touchdowns. Last year, the 5-foot-10 and 190-pound junior averaged 6.1 yards per carry and produced eight touchdowns. He also paced the team with 975 all-purpose yards. It is only the schools second season at the FBS level, but the program is already a competitive team in the Sun Belt. Norfolk State is on the slate next for the Chanticleers and Marable…pick up the rising CFF performer now. — John

On Saturday morning, I analyzed all of my lineups for the upcoming games and noticed that I had Keaotay Ingram starting on one of my teams. I did not like the matchup and decided to scan the waiver wire for replacements. I had watched the Notre Dame-Louisville game on Monday and Javian Hawkins impressed me. I made the switch and it paid a nice dividend. Hawkins rushed for 123 yards while Ingram totaled only 61 yards from scrimmage. After two games, the Cardinals’ ball carrier has rushed for 245 yards on only 30 attempts, averaging a healthy 8.2 yards per carry.

A shifty runner, Hawkins excelled on the inside zone runs against Eastern Kentucky with 118 yards on the ground in the third quarter. He is the first freshman at the school to surpass 100 yards rushing in back-to-back games since Lamar Jackson. The Cardinals coaching staff trusts Hawkins and so should CFF diehards. “It’s a great feeling, knowing they (coaches) put trust in us, and we just go out there and performed how we’re supposed to,” Hawkins proclaimed after the Notre Dame game in an interview with Tyler Stocking in 247sports.com. I know that I now believe in the Louisville game-breaker. — John

Everyone who plays CFF is aware of the UL-Monroe and that’s solely due to the pure talent and athleticism of Caleb Evans. This season, the Warhawks added a complementary piece to their offense in Josh Johnson. He is a junior who really picked up his game just in time for draft consideration.

He’s only 5-foot-9, but he more than makes up for his height disadvantage with 215 pounds carrying the load. He’s currently on pace for over 1,500 yards and pretty great numbers in the end zone as well. I have no reason to believe Johnson will stop after the Warhawks take on Iowa State in two weeks. Get used to hearing “Big run from Josh Johnson” this season. — Justin

Twitterverse on Fire!
Identify the running back that has surprised you the most and are now interested in acquiring off the Waiver Wire?

“Xavier Jones has been great.” @VarneyDFS

It’s no secret that Wake Forest has a great offensive system with an excellent quarterback in Jamie Newman and a somewhat favorable schedule now that Syracuse has shown their true colors. But what has been a secret is the production we’ve seen from Scotty Washington, who has put up fantasy-relevant numbers in the shadow of Sage Surratt.

Sure, he did outplay Surratt this past week and it might not last all season. Even as the number two option in Week 1, he caught four passes and a touchdown, and he only proved his worth this week with 158 yards and two scores against Rice. If Washington can stay in week one production level, he’s a starter, and if he sticks with week two, he’s a star. Either way, the Demon Deacons’ playmaker is egregiously unowned or I’m picking him up everywhere. — Justin

At times, our preconceived notions can cloud our analysis of players and their potential. Case in point: I touted Collin Johnson all summer and might have overlooked his teammate Devin Duvernay. Well, I might have erred in my analysis. After two weeks, Duvernay is putting distance between himself and Johnson in the pecking order at Texas. Against LSU, the senior was nearly unstoppable with 12 catches for 154 yards and two touchdowns. Duvernay has corralled 21 passes for 209 yards and two touchdowns while replacing Lil’Jordan Humphrey in the coveted H-position (or slot) for the Longhorns. “Devin’s had an unbelievable offseason…We’ve got to do a better job getting him the ball schematically,” coach Tom Herman declared at the dawn of training camp in the borntoorangenation.com. So far, mission accomplished. Duvernay is a must-own playmaker in college fantasy football for the remainder of the season. — John

Twitterverse on Fire!
Identify the wide receiver that impressed you the most and are now interested in acquiring off the Waiver Wire?

For over 30 years, I have dumpster dived to acquire a tight end in NFL fantasy football. I employ the same philosophy drafting and managing my CFF teams. And 2019 has been no different. I have dipped into the free-agent pool a couple of times already.

My next target is Ricci Giovanni at Western Michigan. A multiple-sport athlete and quarterback in high school, he played wide receiver for his first three seasons on campus and switched to tight end last year. In April, he graduated with a business degree in finance and netted academic All-MAC for the third consecutive time. Giovanni, a fifth-year senior, caught 35 passes for 392 yards last year and earned Third Team All-MAC honors in 2018.

He kicked off the season as a John Mackey Award candidate and has not disappointed. In two games, the Broncos’ tight end has reached the promised land three times on 11 receptions for 150 yards. “He’s (Giovanni) the one that seems to be catching everyone’s eye because he’s bigger than he looks when you stand next to him and he runs. He has to be a playmaker for us. We’re young a little bit on the edges, and he’s kind of the one guy that is a veteran and we can get matchups with him,” coach Tim Lester said in the battlecreekenquirer.com by Nick Buckley. I am not an NFL scout, but the senior has opened my eyes so far. — John

Tight End is a complex position in any season if you can’t get the top guy and that guy is really hard to find this season. Basically, what you are wanting is a player who can produce consistently when you need him too. The guy you need is Tyler Mabry who came over to Maryland after a solid career at Buffalo, and it appears to be a great career move on his part.

Coach Mike Locksley utilized tight end Irv Smith Jr. all last season at Alabama and appears that he has another great quarterback-tight end duo in Josh Jackson and Tyler Mabry. Mabry has had a touchdown in both games this season and appears to be a red zone target for Jackson. Mabry won’t put up game-winning numbers, but he’s not going to drop the ball on you when you need him. — Justin