The Case for Chris Thompson in PPR Leagues 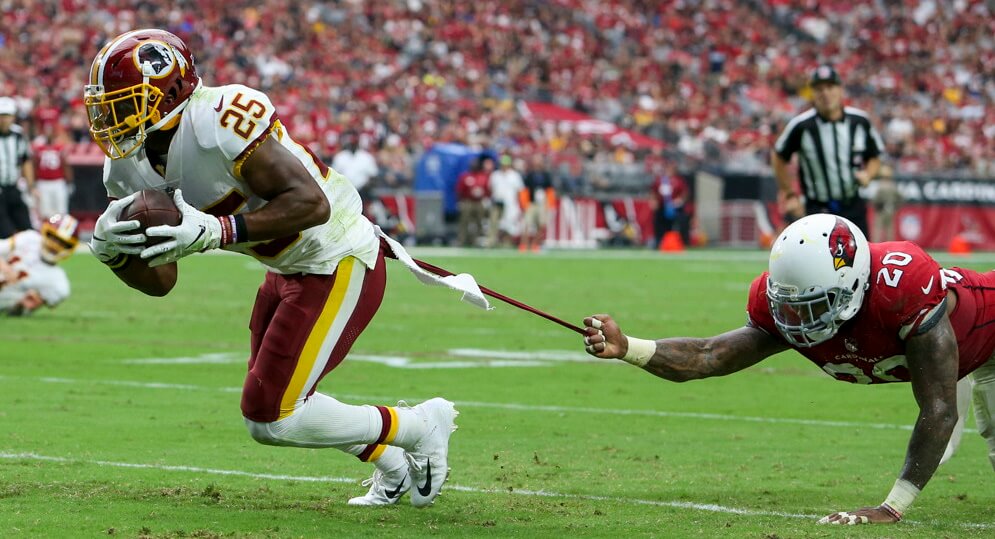 Chris Thompson was the overall RB54 in PPR leagues last season. Therefore, his current ADP of RB61 in PPR leagues seems fairly logical, especially when you consider his injury and his having to contend with Derrius Guice and Adrian Peterson in a crowded Washington backfield. However, I believe fantasy owners are missing the boat with Thompson. Here are some reasons I expect Chris Thompson to provide considerable value in 2019 PPR leagues.

Washington drafted Chris Thompson in the fifth round out of Florida State in 2013. He barely saw the field during his first two seasons in the league, so let’s skip to 2015. Thompson was the overall PPR RB31 through the first six weeks of that season. In Week 6, he was laid out due to an errant pass from Kirk Cousins and injured his back. Thompson was never quite the same following the injury. He missed three games and stumbled to an overall RB53 finish. 2016 was the first and only year in which Thompson played in all 16 games. That season, he finished third on the team in carries and rushing yards. Despite this, he led all Washington running backs in PPR points, finishing 28th overall. (This is called foreshadowing, friends.)

2017 was Chris Thompson’s true breakout. Thompson racked up 771 yards from scrimmage during the team’s first nine games. Thompson was an RB1 in both standard and PPR formats through Week 10. However, Thompson suffered a nasty injury in Washington’s Week 11 in New Orleans. He missed the remainder of the year with a broken fibula. Thompson finished the season as the overall RB28 in PPR leagues despite playing in just 10 games. He was 11th-best on a per-game basis among running backs. As I mentioned earlier, he finished 54th in PPR scoring last season. But his overall finish last season does not tell the whole story.

Thompson’s 2018 season was a lot like his 2015 campaign. Thompson was the overall RB18 in PPR formats through four games. Because of an early bye, he was the RB15 on a per-game basis. But once again, the injury bug struck. Oddly enough, the injury occurred in a familiar manner and locale. Thompson was forced to leave Washington’s Week 5 tilt in New Orleans after getting hit trying to catch a poorly thrown ball on a two-point conversion. This was eerily reminiscent of how he got hurt early in 2015. Much like that season, Thompson could not fully recover from the injury. He missed six of Washington’s next seven games and failed to make an impact upon his return.

Chris Thompson enters a crowded Washington backfield heading into 2019. That, combined with a checkered injury history, has caused fantasy owners to shy away in drafts. The crowded backfield should not be a concern for fantasy owners. Peterson and Guice will get the carries on first and second down, and that’s just fine. Washington is not going to utilize Thompson in an early-down role. Jay Gruden has spent the last five seasons with Thompson. He knows what he has in Thompson. Thompson is a receiving threat out of the backfield and a really good one. Gruden has never given Thompson more than 68 carries in a season. I do not expect that to change in 2019. Thompson does not need double-digit carries per game to make a fantasy impact.

Washington’s receiving corps is not exactly flush with talent. No receiver on the current roster has ever even had as many as 45 catches in a season. The only players on the team who have hit that mark in a season are Thompson and tight ends Jordan Reed and Vernon Davis. Reed is always a health risk and is a bad hit away from retirement. Davis is 35 years old. Washington declined its fifth-year option on wideout Josh Doctson. Paul Richardson looks to be recovered from offseason shoulder surgery but is now hampered with a quad issue. Trey Quinn should get most of the reps in the slot but is unproven and dealing with a thumb injury. All told, Chris Thompson may be their best threat in the receiving game.

The quarterback situation in Washington is a bit murky as well. Right now, it looks like Case Keenum is the leader in the clubhouse, even if by default. Keenum has been quite fond of the check-down throughout his career. Per Next Gen Stats, Keenum ranked 23rd among 30 quarterbacks with at least 300 passing attempts in average intended air yards. He finished 24th of 29 in the same metric in 2017. He has targeted running backs on 20 percent of his throws over the last two seasons. When he targets a running back in 2019, it will be Chris Thompson more often than not. A potential switch to rookie Dwayne Haskins would not hamper Thompson in the passing game. Haskins would need a safety blanket, and few are better in that capacity than Thompson.

Thompson should also be a game script beneficiary in 2019. Vegas projects Washington to win just six games this season, and even that may be optimistic. Current betting lines have Washington favored in just four games all season long. Meanwhile, they are at least a six-point underdog in five games. While plenty can change as the season progresses, this is a team likely to find themselves playing from behind quite a bit. Such a scenario would only enhance Thompson’s outlook. Given the lack of credible receiving options in Washington, Keenum’s propensity to dump the ball off, and Washington’s problems along the offensive line and expected negative game script, I would not be surprised to see Chris Thompson challenge for the team lead in receptions this season. As was the case in 2016, Thompson can finish third in his own backfield in rushing yards and still lead them in fantasy points.

Chris Thompson has all the makings of a PPR value this season. He comes with some concerns about his workload and health. But we are talking about a player you can usually get in the 15th round of drafts. There are no players in that range that are surefire studs, and few who can give you what Thompson can. He has finished as a top-30 PPR running back in two of the last three seasons and had a shot to reach that threshold in both 2015 and 2018 if early-season injuries had not derailed his momentum. I think Thompson will easily outperform his current ADP. I expect him to finish inside the top-40 among running backs in PPR leagues, and he has legitimate RB2 upside. He is exactly the kind of player you should be targeting at the back end of drafts, rather than reaching for a kicker or defense.

Are you buying into Chris Thompson in PPR leagues? Head on over to the 2019 Fantrax Fantasy Football Draft Kit for more great strategy, analysis, and rankings.