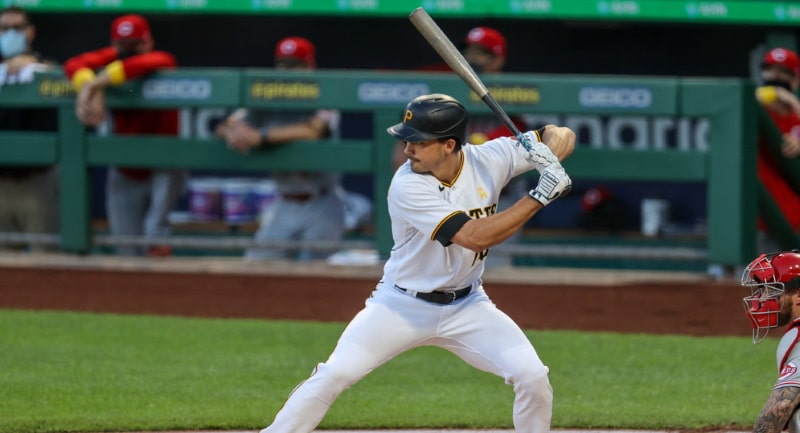 Frankly, it’s difficult to find cheap sources of batting average and OBP. Often those players end up going earlier in drafts, especially if they provide juice in several other categories. For this article, we’re digging into players in the later rounds that will help our fantasy squads in batting average and on-base skills. In terms of draft pick range, we’re typically looking at or around pick 300 per NFBC ADP over the past couple of weeks.

Let’s quickly define batting average or OBP thresholds to look for. Amongst qualified hitters, the median batting average ended up at .262 from 2018-2020. Some notable hitters that hit .262 over the past three seasons include Shin-Soo Choo, Josh Bell, Willy Adames, and Eduardo Escobar. In terms of OBP, the median OBP over the past three years (2018-2020) amongst qualified hitters – .331. Notable hitters with an OBP in that range include Jean Segura (.334) Trey Mancini (.332), Rafael Devers (.331), and Joey Gallo (.330).

One of my favorite sleepers heading into 2020, Bryan Reynolds struggled with a terrible .189 batting average. He finished with seven home runs, 24 runs, 19 RBI, and one steal with a 10.1% walk rate and 27.4% strikeout rate. This came right after his breakout 2019 campaign with 16 home runs, 83 runs, 68 RBI, and three steals with a .314 batting average. Reynolds also boasted a solid .377 OBP in 2019, but we’ll put him in the cheap sources of batting average category.

Anther hit…weird. Let's take a look at Bryan Reynolds All-Star credentials, shall we?

✅ He leads all Big League rookies in batting (.358) and OBP (.416) and ranks second among all MLB players in average since making his debut.
✅ He's hitting .377 in June
🤔 pic.twitter.com/KO8hEQEGcH

When looking at plate discipline metrics in 2019 and 2020, Reynolds recorded a similar chase rate with a 31.1% and 31.3% O-Swing% paired with a 75.9% and 75.1% Contact%. That said, it’s fair to toss it up to randomness and his .231 BABIP when he’s typically a high BABIP guy with a career .347 BABIP. Expect Bryan Reynolds to bounce back in 2021 even if the projection systems look worrisome. The BAT X projects Reynolds for 18 home runs, 74 runs, 72 RBI, and five steals with a .266 batting average in 614 plate appearances. He’ll play every day and should accumulate counting stats across the board.

Who doesn’t love the best shape of our life narrative? Avisail Garcia noted he lost about 35 pounds with a healthy diet in the offseason. That’s music to my ears for a guy like Garcia with a linebacker build of 6-foot-4 and 250-pounds. Garcia typically provides some power and a bit of speed. From 2017 to 2019, Garcia averaged 19 home runs and six steals with a .288 batting average in 1,476 plate appearances (492 per year). Then in 2020, Garcia totaled two home runs and one steal with a .238 batting average. None of the plate discipline metrics look out of the ordinary, but he comes with risk given his high career 41.6% O-Swing% and low 69.9% Contact%.

This feels like a Brewers hype account today, so I'm sorry for that (not really), but this looks like a pretty significant body transformation for Avisaíl García. More trim than any time I've seen him in the big leagues. https://t.co/cORmtLC1nF

However, with Lorenzo Cain back in the fold, Avisail Garcia should move over right field, which should help his offensive production. He primarily played in centerfield in 2020 with Cain opting out, but that’s not his typical outfield spot. The best shape of his life plus his normal outfield spot leads us to expect a bounce-back for Garcia who projects for 25 home runs, eight steals, and a .269 batting average per the BAT X. Queue up Reynolds and Garcia late in drafts.

In dynasty leagues, it feels like Amed Rosario is a buy-low candidate given the hype coming off of his 2019 season. In 2019, Rosario finished with 15 home runs and 19 steals with a .287 batting average. Then in 2020, he hit four home runs with zero steals and a middling .252 batting average. Unfortunately, he projects for some rocky playing time with 425 plate appearances according to the BAT X with nine home runs, 12 steals, and a .275 batting average. With the depth at shortstop, don’t forget about Rosario late in drafts as a bench bat or middle infield target. Maybe just maybe, he works into more playing time with his Contact% and Z-Contact% slightly above the league average yet his career 40.2% chase rate is worrisome.

With the San Francisco Giants, they seem to mess around with playing time or we experience these late breakouts. That’s the case with Alex Dickerson who finished 2020 with ten home runs, 28 runs, and 27 RBI with a .298 batting average. In his career, Dickerson totaled 653 plate appearances with 26 home runs, 96 runs, 92 RBI, and six steals with a .273 batting average. Dickerson never totaled more than 285 plate appearances partly due to injuries such as Tommy John surgery in early 2018. He gradually improved in his Statcast data with a 10.7% barrel rate and 44.3% hard-hit rate in 2020.

However, the tricky part with the Giants involves their plan to platoon about half of their lineup. Unfortunately, Dickerson projects to platoon against righties yet should hit cleanup for the Giants behind Mike Yastrzemski. Given his track record in limited samples and above-average contact rates, the BAT X projects him to barely surpass the median batting average over the past three seasons. Dickerson projects for 19 home runs, 64 runs, 65 RBI, and two steals with a .262 batting average in 495 plate appearances. If he continues to hit, Dickerson should eat up more plate appearances assuming health, and just passes the threshold as a cheap source of batting average.

The projection systems seem to bake in some regression in batting average possibly due to age or potential decline. The BAT X projects Eaton for 14 home runs, 68 runs, 53 RBI, and nine steals with a .258 batting average. However, Eaton’s high career 91.8% Z-Contact% gives me optimism that he’s a cheap source of batting average. His 36.5% O-Swing% in 2020 looks like an outlier compared to 28.2% in 2019 and career 29.4% O-Swing%. Another guy that could fall into a cheap source of on-base skills as well with his career .360 OBP.

Okay, we’re cheating here since his ADP spiked about 30-40 picks in the past week. Although I don’t typically like targeting prospects in redraft leagues, Andrew Vaughn looks like a nice late-round cheap source of on-base skills. The White Sox didn’t re-sign Edwin Encarnacion and it looks like there’s a path to playing time at DH or giving Jose Abreu time off at 1B. Roster Resource has Zack Collins at DH currently, but Vaughn is a better hitter than him. Vaughn’s OBP skills show up with his 30 walks and 38 strikeouts in his brief minor league career across 245 plate appearances.

"Want to see me drill a 3-run homer over the left-field fence?" — Andrew Vaughn, probably. pic.twitter.com/T9i1jNS44C

Vaughn has an above-average hit tool and plus-plus raw power. In college at California, Vaughn hit 50 home runs with 163 RBI and a triple slash of .374/.495/.688 good for a 1.183 OPS. In the Prospects Live White Sox Team Reports, they note that Vaughn recorded max exit velocities of over 116 mph. That’s elite power when we consider Major League hitters such as Nelson Cruz, Pete Alonso, and Vladimir Guerrero Jr. Considering drafting Vaughn as drafts inch closer to pick 300 assuming he fits your team construction.

After his breakout half-season in 2019, where he hit 16 home runs, Tommy La Stella followed that up with five home runs in 228 plate appearances and a slash line of .281/.370/.449. Before 2019, he totaled ten home runs in 947 plate appearances. However, La Stella always showed amazing plate discipline with a career 9.6% walk rate and 10.6% strikeout rate. Although La Stella should bat leadoff for the Giants, the Giants project to platoon half their lineup per Roster Resource, so temper expectations with plate appearances. In OBP leagues, La Stella is a cheap source to target late in drafts. However, it’s difficult to roster part-time players, but he should provide value based on the matchups.

I still believe in the veteran Joey Votto, especially in OBP leagues. The counting stats, particularly in the power department, keep trending down, but he still holds a high OBP. In his career, Votto boasts a .419 OBP, but it’s dipped to .357 and .354 in 2019 and 2020. According to Jeff Zimmerman in a Mining the News Article, he noted that Votto used a more aggressive approach in late August 2020.

Hopefully, those changes stick into 2021 since he’s still one of the elite OBP players, and could benefit from a more aggressive approach assuming it translates into power and production. He’s a cheap source of on-base skills, and target him closer to pick 300 or earlier in OBP leagues. I’m expecting him to bounceback in 2021.

Another not-so-exciting player in Cesar Hernandez looks like a cheap source of batting average or on-base skills. In his career, Hernandez rocks a .277 batting average and .352 OBP. Unfortunately, he doesn’t provide a ton of power but expects to bat leadoff so he’s a solid source of runs and usually chips in double-digit steals. However, in 2019, Hernandez stole nine bags then zero in 2020. His 2019 season came after he averaged 17 steals from 2015-2018. The projection systems appear to expect some regression in the steals department closer to a half dozen. It’s difficult to find plate appearances late in drafts, and Hernandez is a boring guy that will play every day.

We observed a positive boost in the offense for the Giants in 2020 compared to 2019. As a team, the Giants ranked 6th with a .337 wOBA in 2020 yet the team ranked 28th with a .295 wOBA in 2019. Yikes. There’s a possibility that the Giants’ offense as a whole regresses if they open the archways again. With the archways closed, it supposedly limited the wind from knocking down the ball in right field. They also adjusted the ballpark dimensions and moved in the fences, so that may have boosted the Giants the production in 2020. The question remains – how much? Overall, Brandon Belt is a solid and cheap source of on-base skills with some power.