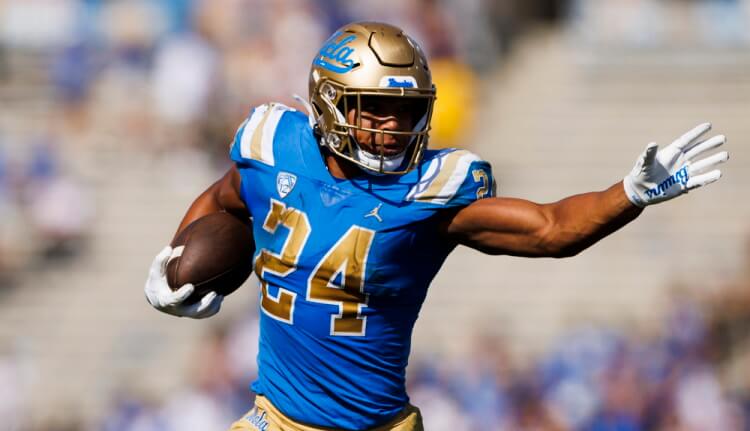 Thorne is coming off one of his better performances of the season as he turned in 21.54 FP against Rutgers. He should do something very similar against this very weak Hoosiers’ secondary. They are allowing over 270 YPG in the air, and Thorne will be able to take advantage of it. At this number, if he limits the turnovers, Thorne is an absolute steal.

When Vanderbilt games get listed on FanDuel, Davis is averaging just under 18 carries, has seven touchdowns, and has turned in four 100-plus yard performances. Florida has a poor run defense, and Davis is rolling right now as he is averaging 21.6 FPPG over his last two games. Look for Vandy to keep Anthony Richardson off the field by establishing the run game and controlling the clock.

Johnston has turned in some big performances down the stretch for this Horned Frogs team. He is averaging 21.16 FPPG in his last five outings and has scored a touchdown in each of those games as well. Max Duggan and the rest of the offense has slumped over the last few weeks and will be looking to obliterate their rivals on Saturday so expect to see some explosive plays for Johnston.

Reed has scored a touchdown in five out of his last six games and has averaged 5.5 receptions across that span. He is a good stack to have with QB Payton Thorne especially if you are looking to add some of the higher-salaried players like Blake Corum and Max Duggan.

For one, Arkansas has a very bad secondary that is allowing over 280 passing yards a game. In addition to their poor secondary, the Razorbacks also give up nearly 150 rushing yards a game. Jaxson Dart will ball. This may very well be a career game for Dart against this weaker defense. He has been very consistent all season and has the ability for some 25-plus point performances.

Austin Jones is coming off his second 19 FP game of the season and will be looking to build on that in Travis Dye’s absence. Looking at his two 19 FP nights, he averaged 11.5 carries for 92 yards, three receptions for 27.5 yards, and a touchdown. He will see an uptick in production this week, and if he can get to 19 FP at this number, you will be well on your way to earning some money.

The Rebels give up quite a bit on the ground, and Sanders could play a huge factor in this one. He has had poor performances in the last two weeks and will be looking for a big-time, breakout performance as the Razorbacks will try and feed him often to keep the Rebs offense off the field.

A.T. Perry has been consistent all year with just two performances under 11 FP. He has also scored a touchdown in every game but two this season. Syracuse has a decent defense, but they have allowed 31.3 PPG in their last four games. Perry will get his looks and will find the endzone.

Over/Under: Iowa at Minnesota OVER 32.5