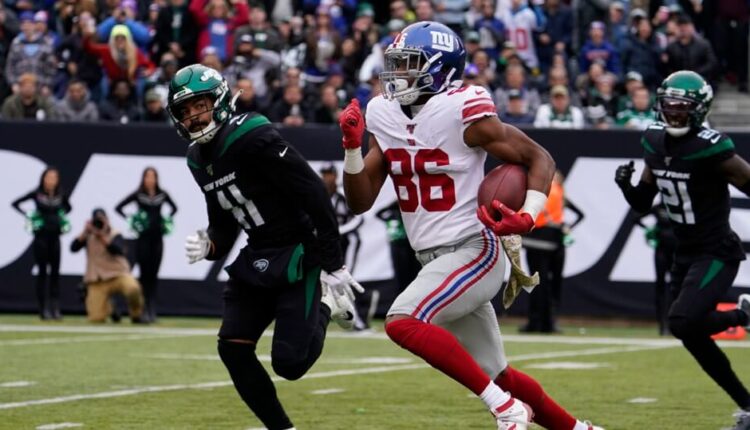 With the holidays right around the corner, it is time to prep those shopping lists. And what better way to secure your funds for said gifts than by playing some Week 11 NFL player props? OK, it might not be the best way. But it is fun, and a good way to have a little extra skin in the game. So what are you waiting for? Here are some of my favorite Week 11 player props. I will likely add a couple more on Twitter between now and Sunday, assuming Twitter is still operational by then. Enjoy and best of luck if tailing!

Of all NFL wide receivers who will be active this week, just 10 have run at least 100 routes and have averaged at least two yards per route run this season. Names on this list include studs like Justin Jefferson, Stefon Diggs, and Davante Adams. But did you know that Darius Slayton also fits this criterion? Slayton averages 2.26 yards per route run this year, ninth-best among wideouts who are playing this week. And yet you will find at least two dozen Week 11 player props with higher receiving yards totals than Slayton’s 39.5 number. That is far and away the lowest among the 10 players who fit the aforementioned criteria. This feels like a buying opportunity, especially considering the issues the Detroit Lions have had on defense.

Detroit has allowed the sixth-most receiving yards to opposing wide receivers this season. They have allowed at least 50 receiving yards to 14 different wide receivers on the year. That is not ideal given the fact that they have played nine games. None of Detroit’s cornerbacks have fared particularly well in coverage. Their three primary corners (Jeffrey Okudah, Will Harris, and Mike Hughes) have each allowed a catch rate of at least 70 percent against them. That bodes well for Slayton, who has emerged as New York’s go-to receiver in recent weeks. Slayton has led the team in receiving yards in four of his last five outings, including three straight. I expect that trend to continue Sunday, which could lead to added opportunities for Slayton to help us fatten our wallets this week.

In the four games, Slayton has led the Giants in receiving, he has had 79, 58, 66, and 95 yards. I am patiently waiting for oddsmakers to post alternative receiving yardage thresholds for Slayton. There is a good chance they will list him at about +200 to crack the 60-yard mark and +500 to reach 80 receiving yards. I think both numbers are quite reachable in this matchup. Saquon Barkley will still be New York’s offensive centerpiece, but Slayton may need just one big play to reach those milestones. I will also be interested in Slayton’s longest reception prop. He has had four catches of at least 20 yards in his last three games. If the books list his long reception below 20 yards, I will likely have some exposure to that line as well.

When Washington upset the Philadelphia Eagles and ended their perfect season, they did so by running the ball. And then running the ball some more. And then a bit more for good measure. In total, they ran the ball 49 times on Monday night. The Commanders have run the ball 173 times over their past five games, and have posted a 4-1 record in the process. During this stretch, their quarterbacks have thrown just 143 passes. I do not expect Washington to suddenly veer away from a formula that has generated its most successful stretch of the season. That is even more apparent when taking a look at their Week 11 matchup against the Houston Texans.

The Texans have been destroyed on the ground all season long. They enter the weekend having given up the most rushing yards and rushing touchdowns to opposing running backs. Houston allows 5.47 yards per carry to the running back position, the second-highest in the league. They also allow an average of 1.67 yards per carry before contact. That is the third-highest mark in the NFL. You do not need to convince Ron Rivera to run the ball, and this matchup should allow him to do just that. In Taylor Heinicke’s four starts this year, he has only gone over 216.5 passing yards in one of them. That was a come-from-behind effort in which Washington trailed by nine points until the final five minutes of the ballgame before beating Indianapolis in the final minute. With Washington favored on Sunday, that scenario is not expected to repeat itself.

There are a couple of sportsbooks (most notably FanDuel and PointsBet) that have yet to post a passing prop for Taylor Heinicke. I would prefer to wait until these numbers get posted and hope one or both posts a number higher than 216.5. However, I do not suspect that either one will post a number higher than 216.5. I would expect both to come in around 214.5. Hopefully, we get an answer on that front sooner than later. I also think it is feasible to play Heinicke’s completions (18.5) or attempts (29.5) instead. Houston does allow 7.69 yards per pass attempt, which is the third-highest number in the NFL. Heinicke could connect on a deep ball or two which would have us sweating out his yardage prop. Either way, I think fading Taylor Heinicke will be a successful strategy this week.

When I published my Week 11 Flex rankings the other day, I warned that I may lower my ranking of Donovan Peoples-Jones based on the storm that was on its way to Buffalo. Luckily for those invested in Peoples-Jones, the NFL has moved Sunday’s game to Ford Field in Detroit. That means that DPJ has a good chance to continue his recent form. Peoples-Jones has had at least 50 receiving yards in six consecutive contests. In five of those, he has surpassed 70 yards. Based on his recent play, his Week 11 prop of 43.5 receiving yards feels a bit disrespectful. I think the change in value increases DPJ’s floor and ceiling this week, making this one of my favorite Week 11 player props.

We know that Cleveland will look to establish their running game against a Bills defense that has had issues stopping the run in recent games. Nick Chubb and Kareem Hunt would get their fair share of touches regardless of where this game was being played. However, Buffalo’s offense should now be able to fire on all cylinders in a dome against a struggling Cleveland defense. They have averaged 27.8 points per game this year, which is the second-best mark in football. Meanwhile, the Browns have allowed 26.4 points per game this year. Only the Detroit Lions have allowed more points. Buffalo’s implied Vegas total is right around 29 points, and I would lean toward the over. That means Cleveland will be forced to throw the football. When they do so, Peoples-Jones figures to be heavily involved.

Peoples-Jones is second on the Browns in targets, receptions, and receiving yards. He may have to compete with the returning David Njoku, but he should still have enough opportunities to surpass this yardage mark. Buffalo’s pass defense is slightly above average, but not unbeatable by any means. They have allowed a dozen wideouts to exceed 45 receiving yards against them this year. None of their four qualified cornerbacks grade out particularly favorably. The highest mark among them goes to Dane Jackson, whose 65.5 grade is good for 48th among 115 corners. The improved field condition and expected game script should help Donovan Peoples-Jones surpass his Week 11 player prop for receiving yards.

Also make sure to check out our Week 11 Rankings for your traditional leagues: QB | RB | WR | TE | Flex Rankings