Care or Don’t Care: What to do with Petry, Chychrun, Skinner and Oettinger 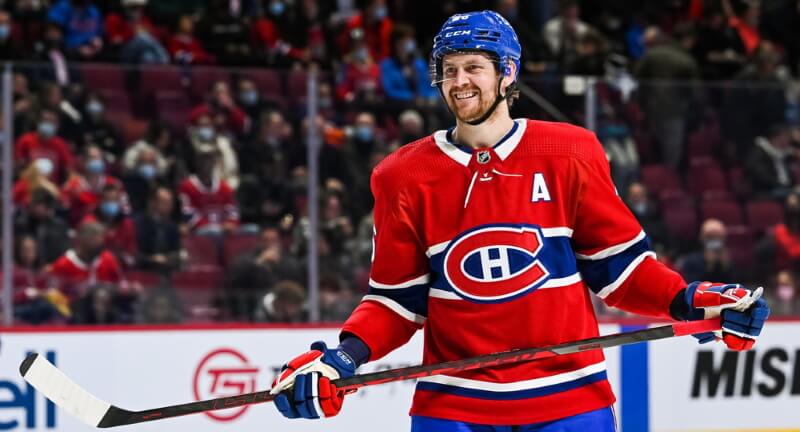 In this article, I will be looking at some early season storylines and determining how much you should care about them and how you should react in your Fantasy Hockey league.

If you drafted Jeff Petry or Jakub Chychrun, you surely have some buyer’s remorse as both players have been terrible so far this season. Petry has been dropped in 25% of Fantrax leagues and Chychrun has been dropped in 15%. If you have one of them on your roster, should you hold on or cut them?

Let’s take a look at their numbers in detail. The following charts show Petry and Chychrun’s average stats per game. The blue columns on the far left are three seasons combined from 2017 to 2020. The orange column in the middle is last season, and the green column on the right is this season to date. 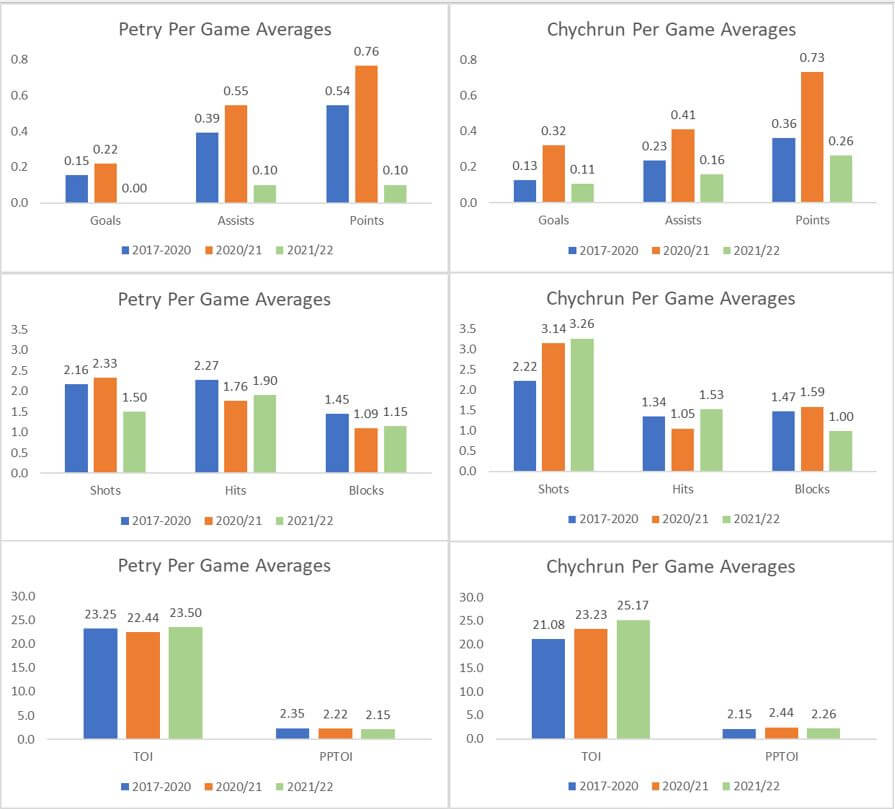 Petry’s ice-time is right in line with past seasons and his hits and blocks are in the vicinity as well. The three concerns to me are the obvious lack of production, the low shot totals, and the fact that he’s temporarily been bumped to the second powerplay unit. Petry is 33 years old, so it is possible that he is declining, but not to this extent. The low shot totals and 0% shooting percentage scream to me of a player that’s lacking in confidence at the moment. It doesn’t help that the Montreal Canadiens are currently the third-worst team in the NHL.

The Habs may be bad this season, but it’s unlikely they will continue to be this bad. It’s also unlikely that Petry’s issues will continue. All it takes sometimes is a fluky goal off of someone’s shin and things will start flowing again. As soon as he gets his confidence back, he’s very likely to regain his spot on the top powerplay unit from Chris Wideman, who isn’t exactly a massive barrier.

Forecasting Petry to regress to the mean and get back to around 2 shots per game and around 0.5 points per game for the rest of the season seems reasonable to me. That would put him at approximately 30 points. I’ll let you decide whether that is good enough for your fantasy team or not.

Chychrun is 23 years old and is supposed to be ascending in his career after a breakout last season. That hasn’t happened so far, and the Arizona Coyotes have been absolutely atrocious in general. The Coyotes are only scoring 1.79 goals per game. If they continue that pace for the full season, it will be the lowest mark since 1954 (only the 13/14 and 14/15 Buffalo Sabres have scored less than 2 goals per game in the past 20 years). Chychrun is also a league-worst -21 in plus/minus, which is on pace for the worst plus/minus in NHL history.

There’s a lot to like about Chychrun’s ice time and shot totals though. 3.26 shots per game is fourth in the league among defencemen and his 25:17 ice time per game is ninth. At the moment, he’s on Arizona’s top powerplay unit and he’s starting to earn some points, with 4 in his last 5 games.

I’m more bullish on Chychrun than I am on Petry and I expect him to be around 0.5-0.6 points per game for the rest of the season, which would be good for 30-35 points. I expect the Coyotes to improve a little, while still being one of the worst teams in the league. Chychrun’s pace of minuses should slow down, but unfortunately, it won’t slow to zero. If you can handle the minuses, Chychrun is still worth having on your team for all of the shots, hits and eventually points.

The Edmonton Oilers have the third-best record in the NHL at the moment, but their goaltending situation is up in the air. Stuart Skinner has started two games in a row, both of which were wins, and is sporting a .939 save percentage on the season.

Mike Smith is on LTIR and Mikko Koskinen has a career .907 save percentage. While Smith is out, I suspect the Oilers will go with the hot hand, rotating Skinner and Koskinen. Both of them are worth owning at the moment and the 23-year-old Skinner has the higher upside vs. the 33-year-old Koskinen who has never really put it together in the NHL.

Stuart Skinner is currently available in 65% of Fantrax leagues and is worth an add.

In some ways, the Oettinger situation is similar to Skinner’s. He’s a young, 22-year-old, who has recently been given a few starts with great success (a 4-1 win and a 5-2 win). Oettinger has a better pedigree than Skinner and was even a first-round pick a few years ago.

The Dallas Stars are a middle-of-the-road team but they are typically solid defensively so a talented goalie like Oettinger can thrive in their system. The problem is the Stars crease is about to be very crowded. Unlike Skinner, who has a fairly clear path to playing time, Oettinger will have to absolutely dominate to stay in the NHL. The Stars have veteran Anton Khudobin on the roster, Braden Holtby is set to return from injury soon, and Ben Bishop is due back from long-term IR any day now.

Once all of their goalies are healthy, the Stars may choose to demote Oettinger back to the AHL so he can be the starter there. His time to be a permanent NHL starter may not be for another year or two.

Oettinger is available in 50% of Fantrax Leagues. You can roll him while he is hot but don’t be surprised if he is sent back to the AHL sometime sooner rather than later.