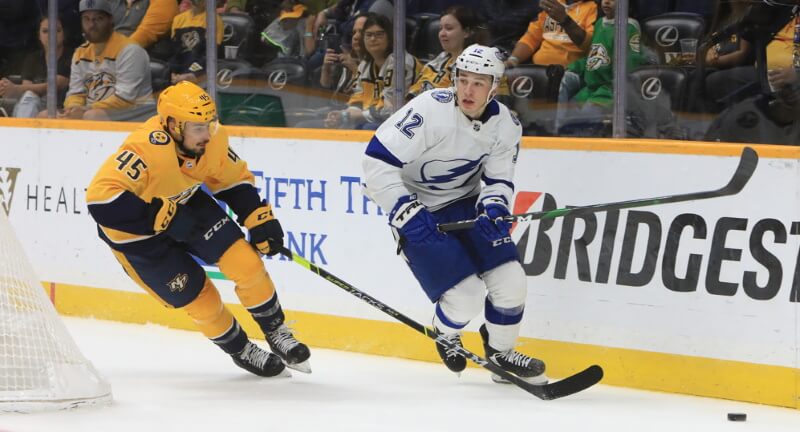 Injuries around the league are starting to pile up. You may need to replace a player as a result, or you could be looking to snag a player off the fantasy hockey waiver wire before he breaks out. In either case, here are some players that can help your fantasy hockey team.

The 13th overall pick from 2020 is not only playing on a deep Hurricanes squad, but he’s playing on the top line. Through 10 games he has four goals and two assists, including an ongoing four-game point streak. Playing that 10th game means he’s here to stay, as it activates the first year of his entry-level contract. Playing with talents such as Sebastian Aho and Teuvo Teravainen gives Jarvis a chance to thrive offensively. Jarvis will also chip in for other categories with his 20 shots on goal, five hits, five blocks, and a plus-4 rating. He’s an easy choice to claim from the waiver wire for as long as he remains in the Canes’ top six with power-play time.

With Casey Mittelstadt still sidelined and Jack Eichel out of the picture, Thompson finds himself as the Sabres top-line center. There were concerns about Thompson as he was limited to just a single game back in 2019-20. He came back in 2020-21 and scored 14 points in 38 outings. This year he’s already almost matched that point total, netting eight goals and 13 points through 18 games. He’s averaging 17:42 of ice time, a near four-minute increase from last year. Being given a larger role, including a spot on the top power-play unit, it’s shaping out to be a breakthrough campaign for Thompson.

The Lightning were already without Nikita Kucherov, but they just lost Brayden Point for at least the next month. That gives Barre-Boulet a clear shot at a top-six role and power-play minutes. His overall ice time isn’t very high, just averaging over 11 minutes per game. But he has goals in back-to-back contests and is playing on a line with Steven Stamkos. That alone is enough reason to pluck him from the waiver wire in moderate to deep leagues.

The 8th overall pick from the 2019 draft has just two career NHL games under his belt. He picked up an assist in his first contest and saw his ice time jump from 14:24 to 18:59 in the second game. He’s fired six shots on goal and posted two PIM with a minus-1 rating. His peripherals don’t stand out, but it’s still very early. The Oilers are going to be missing Darnell Nurse for at least two weeks. Slater Koekkoek is also out, and Duncan Keith left Tuesday’s game early. Injuries to Edmonton’s blue line will result in Broberg being more heavily relied upon. He’s a worthwhile gamble until the team gets healthy. There’s plenty of talented forwards in Edmonton that can help Broberg gain fantasy hockey value.

It’s difficult to target players on the Coyotes considering their abysmal start to the season. However, Capobianco has been a bright spot for the club. He has a pair of goals and a pair of assists in five appearances. Two of these points were generated from the man advantage, while another was an overtime game-winning goal. Speaking of game-winning, the Coyotes have done much more of that since he’s been inserted into the lineup. Arizona only has four wins on the season, but three of them are from Capobianco’s five games, while the other two were one-goal losses. The team has been more competitive with him in the lineup, and he could have a similar effect for your fantasy team.

With Mike Smith sidelined, Skinner was recalled to share the crease with Mikko Koskinen. Skinner has a 2-3-0 record with a 2.44 GAA and .928 save percentage. He’s coming off a loss in which he allowed four goals against, but he has shown he’s capable of more. His prior two games were wins, with one being a 46-save effort in a 2-1 victory over the Winnipeg Jets. Skinner has just seven games of NHL experience, but has a strong chance of a win anytime he’s backstopping the likes of Connor McDavid and Leon Draisaitl.

Through five appearances, Vladar has an impressive 4-0-1 record. This comes with a 1.57 GAA and .946 save percentage, both good for second in the league. His past two starts have been 4-0 shutout victories, including one over his former Boston Bruins. He’s stuck behind Jacob Markstrom, but when Vladar gets the crease, he’s been rock solid. The Flames have been incredibly stingy on defense, allowing just 38 goals against in 20 matches. Of the team’s 12 wins, seven of them have been shutouts. With shutouts always being a difficult category to win, having a Flames goaltender will certainly give you a great chance.

Also check out David Petrie’s look into the early struggles of Jeff Petry and Jakob Chychrun.