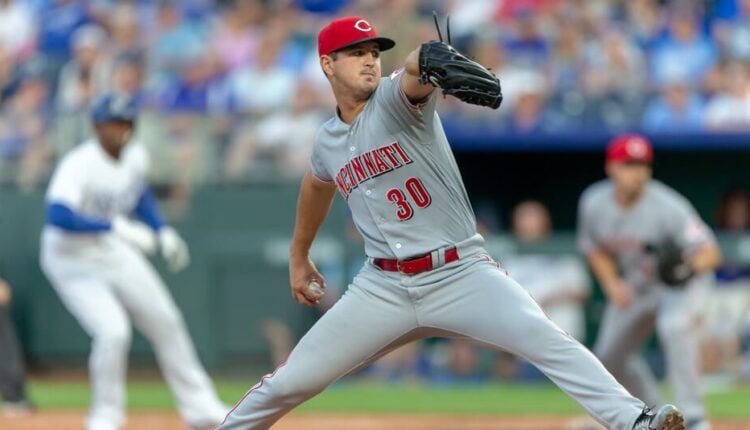 Two people on Twitter messaged and commented about these two pitchers to buy or sell for our weekly installment. Tyler Mahle landed in my starting lineups for 15-team leagues, but the early struggles relegated him to the bench. Although Aaron Civale isn’t on any of my fantasy squads, a reader asked about him, so he warranted a deep dive in this week’s buy or sell. 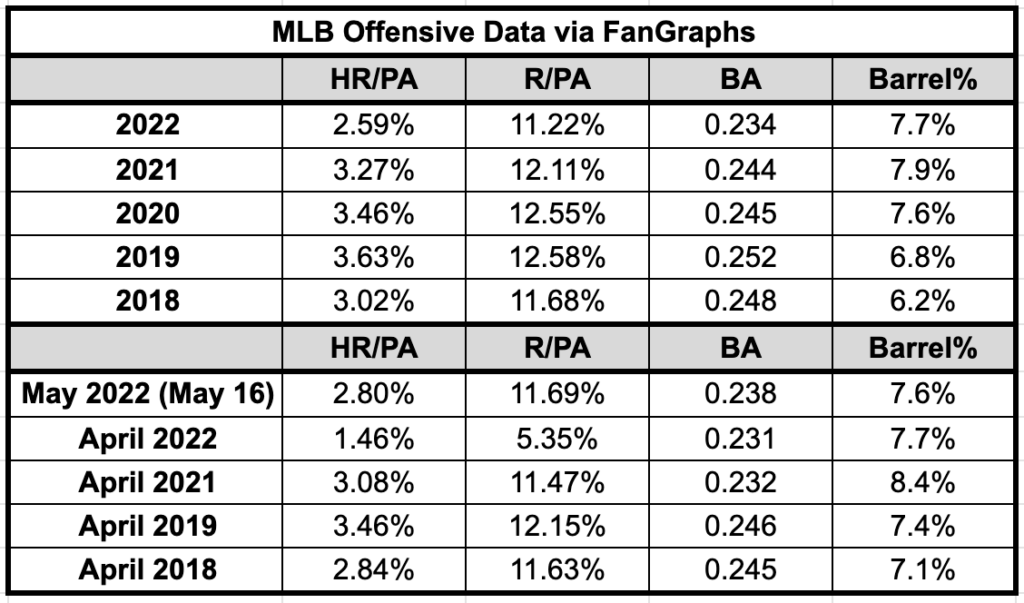 Runs and home runs per plate appearances have increased, though the barrel rate dropped early in May, then quickly rose. We’re noting that because it might mean being more careful with streaming pitchers and pitching matchups. It’s only two-plus weeks in May, so it’s a minor reaction to the data. Let’s look at whether to buy or sell Mahle and Civale for the rest of 2022.

Once the Reds started trading away their core players, maybe that signaled to stay away from Cincinnati pitchers. However, I targeted Tyler Mahle in 2022, and he hasn’t fared well with a 5.89 ERA, 1.47 WHIP, 24.5% strikeout rate, and 11% walk rate in 36.2 innings. The numbers improved after Mahle threw a quality start against the Pirates. Mahle allowed five hits, two earned runs, one walk, and eight strikeouts. 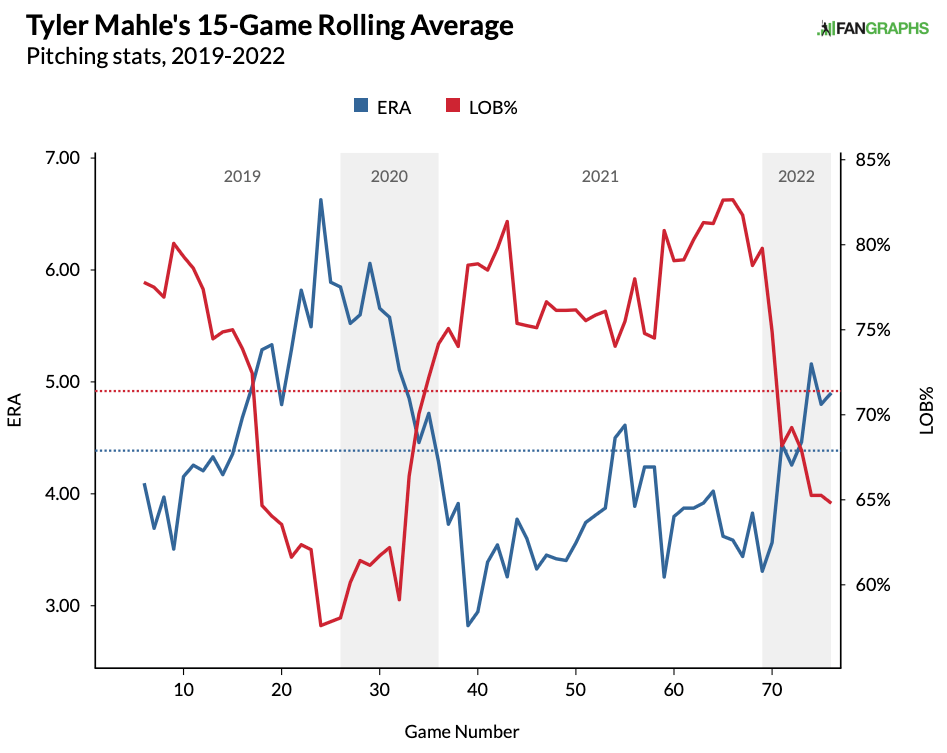 Unfortunately, Mahle’s strikeout rate has also dropped, and the walk rate jumped to a career-worst, though it’s an early small sample. That’s not a recipe for success. Interestingly, most of his overarching plate discipline metrics align with the career rates, with a similar SwStr% at 11.2% in 2022 versus the 2021 rate of 11.4%. Let’s dig deeper into the pitch data to help us examine whether to buy or sell Mahle in 2022. 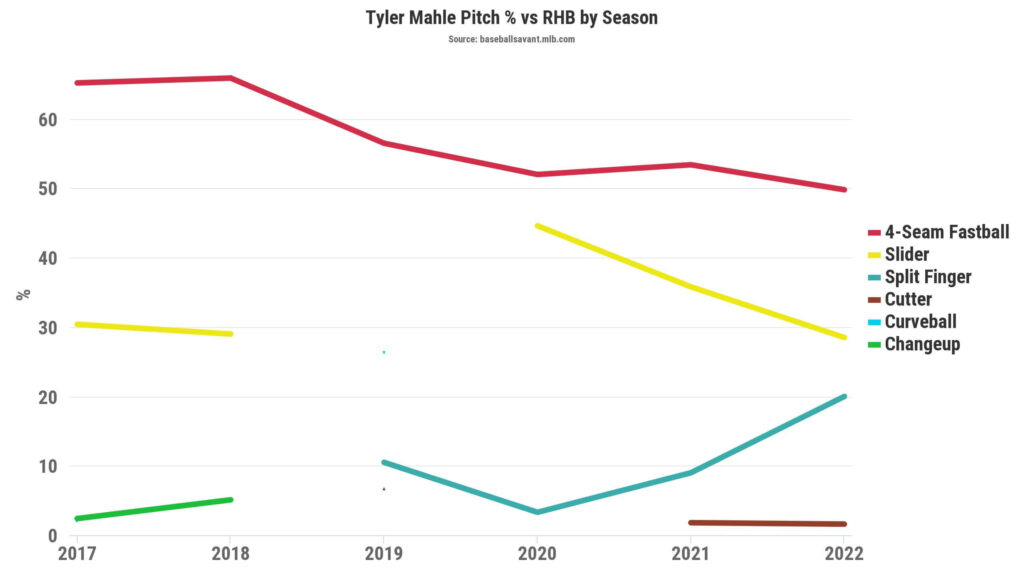 Meanwhile, the usage against lefties remained nearly identical in 2021 and 2022 with the four-seamer and splitter. However, Mahle ditched the slider thrown 18.1% of the time in 2021 for a cutter at 18.5%. It’s likely a Baseball Savant pitch classification question with a similar spin rate, velocity, and movement profiles to the 2021 slider. 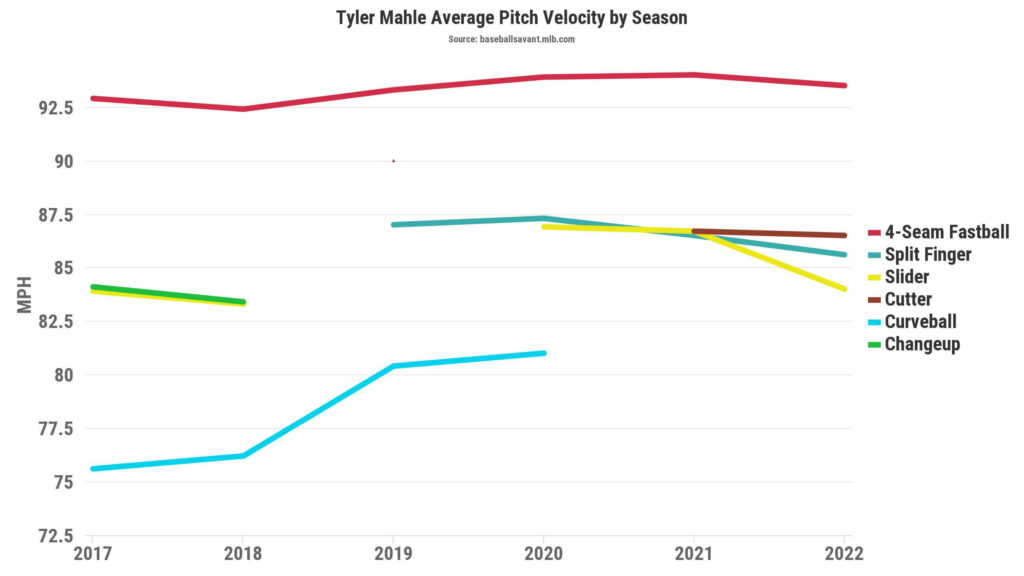 Interestingly, the slider velocity dipped nearly three mph from 2021 to 84 mph. The spin rates remain similar on the slider, but let’s check the movement profile. We’re guessing, but they probably classify the cutter as the slider with an average velocity of 86.5 mph. 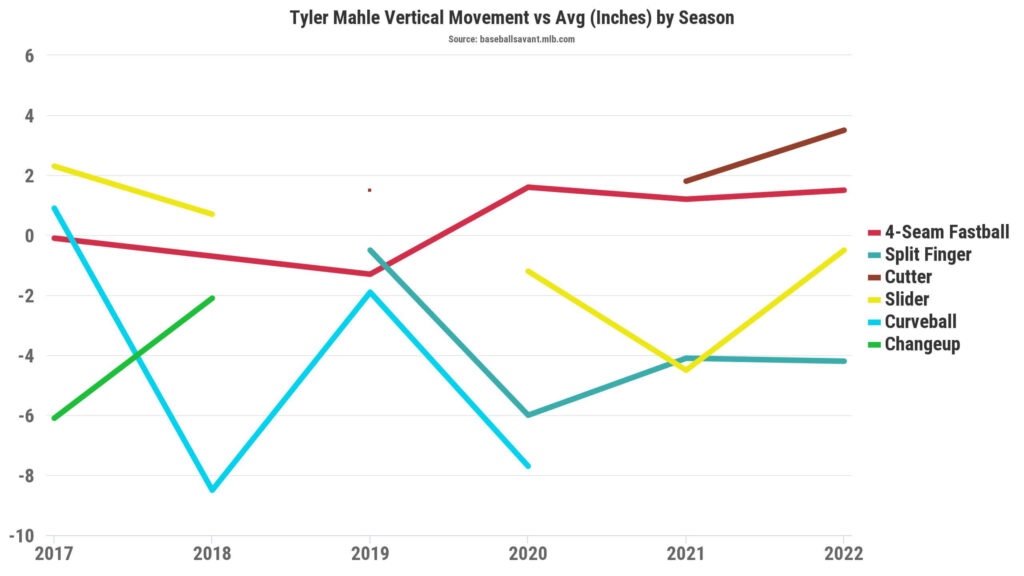 The cutter possesses above-average drop at 3.5 inches more than the average. However, the slider never boasted above-average vertical movement over the past three seasons, and we may view it as different. 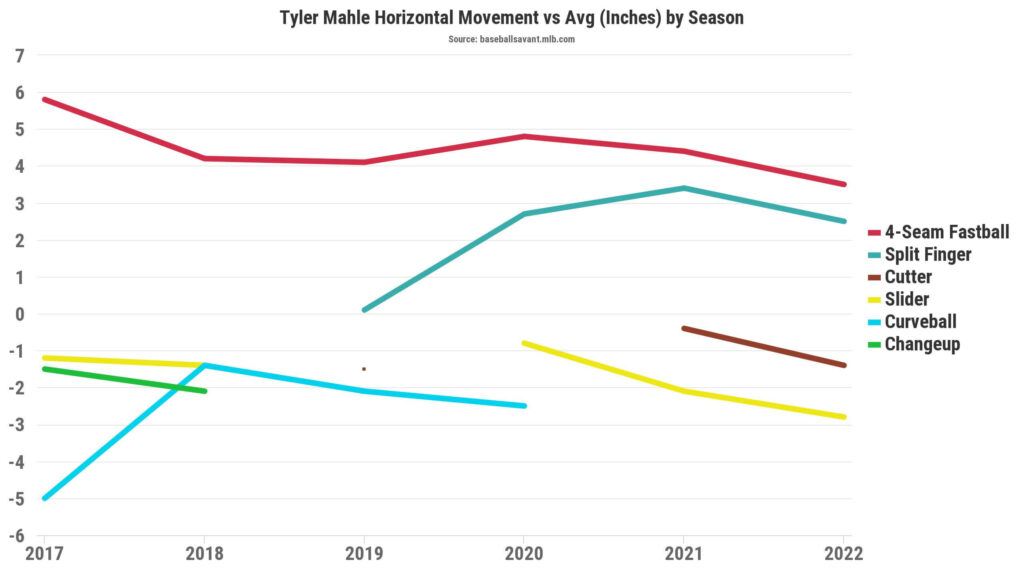 Mahle’s splitter and four-seamer still possess above-average arm-side fade, with the four-seamer typically having plus rise. Outside of the cutter/slider observations, the rest of the arsenal remains similar. That means the metrics could positively regress to buy rather than sell Mahle. Expect the splitter results to improve closer to the career norms based on the movement profile.

The data below comes from FanGraphs, and it adds to the speculation on whether the slider and cutter have classification differences. 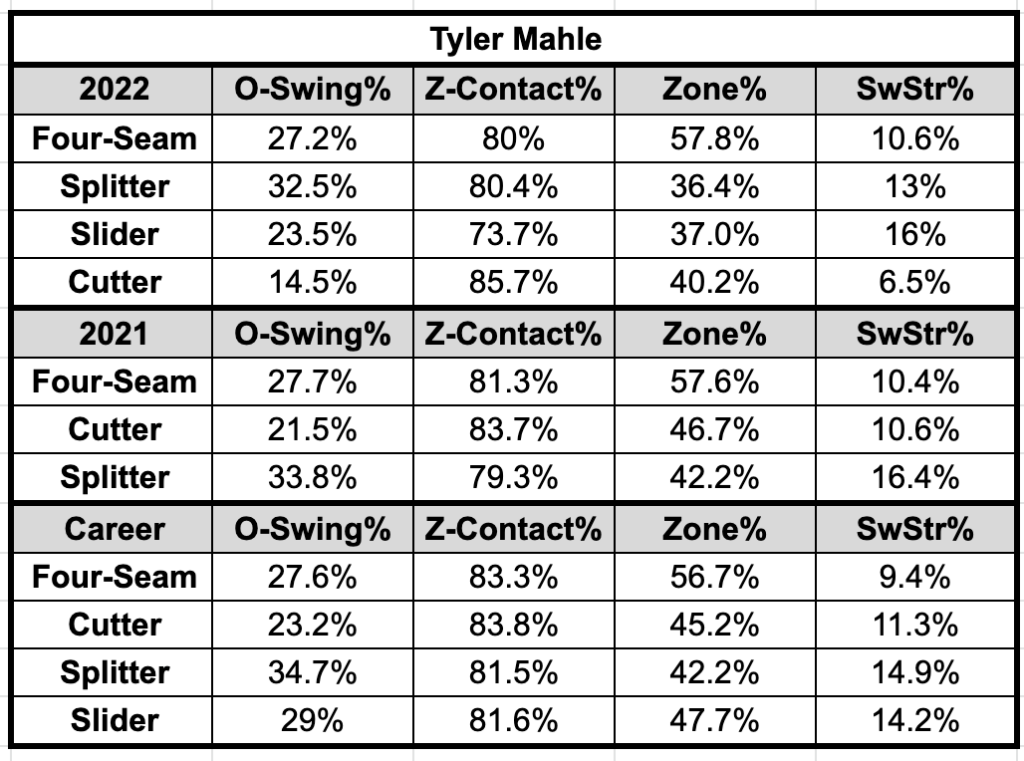 Outside of the O-Contact%, the splitter results have trended downwards, with a .316 wOBA allowed compared to a .211 wOBA in 2021.

Thankfully, the splitter results aren’t off the charts terrible in 2022. When adding the Zone%, O-Swing%, and contact rates, Mahle’s splitter should regress closer to the career norms, meaning buy rather than sell low in most formats. The movement profiles point towards intriguing stuff, though the team context isn’t great.

If we could toss out ERA, it would help avoid shaking our heads at Mahle’s current ratios. The BAT rest of season projections have Mahle with a 4.40 ERA, 1.33 WHIP, 23% strikeout rate, and 8.7% walk rate. They project the BABIP and LOB% to regress, aligning with the ratios moving closer to the career norms. In both redraft and dynasty leagues, it’s worth buying low on Mahle as an SP4 or SP5 in 15-team redraft leagues. However, in 10 or 12-teamers, Mahle might be a waiver wire pickup to stash, so cautiously buy into him for 2022. 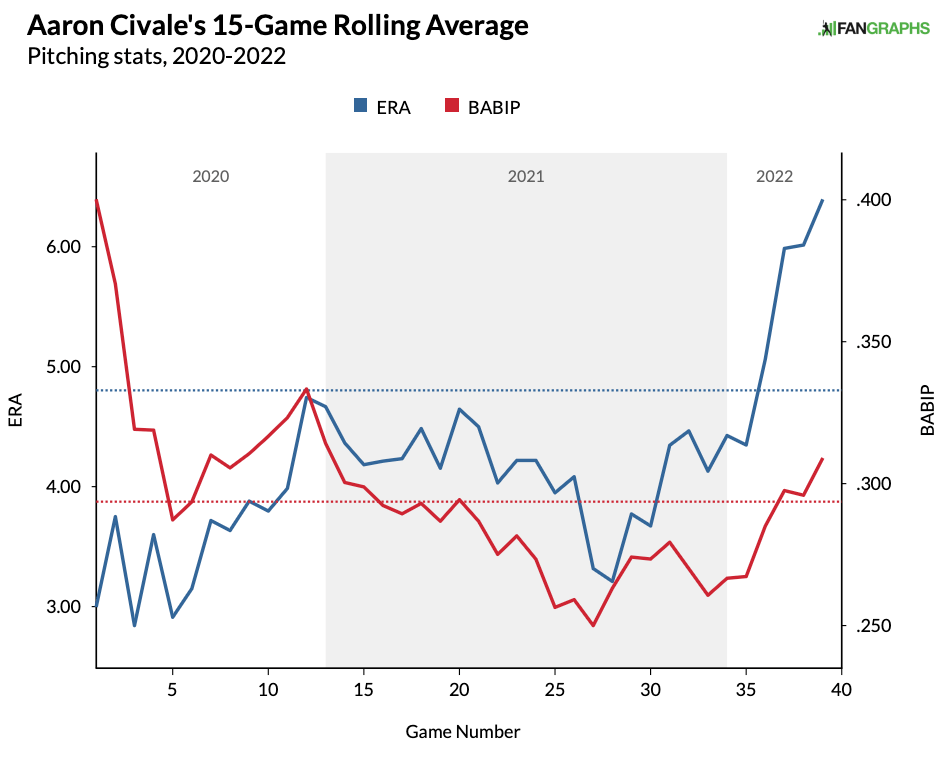 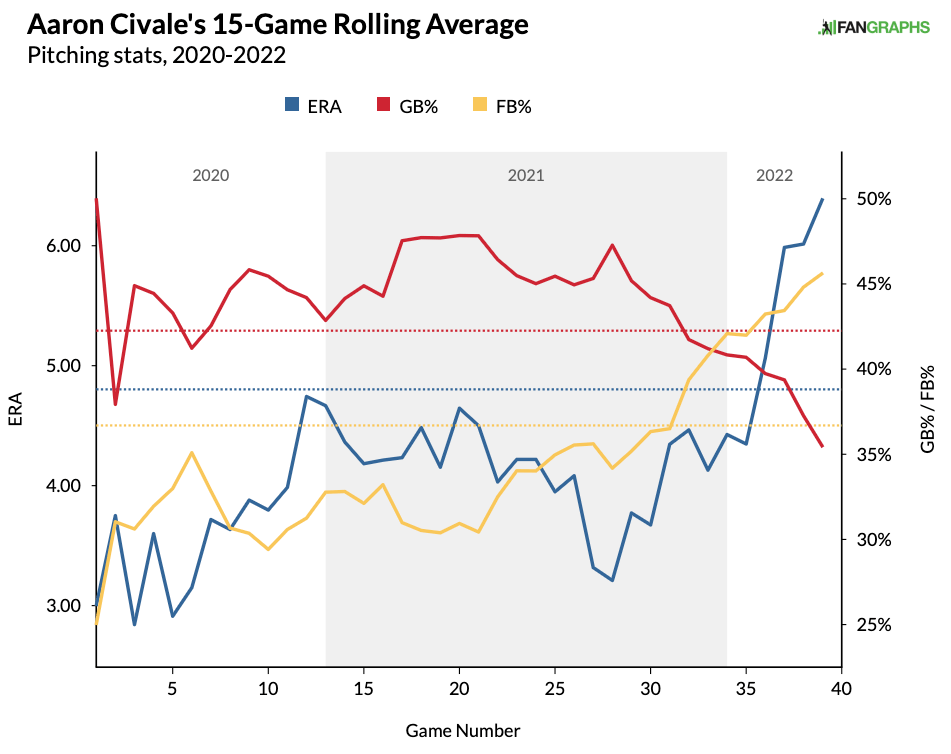 Unfortunately, Civale traded groundballs for flyballs, which probably contributed to the jump in HR/9 at 2.19 compared to 1.66 in 2021, yet a career rate of 1.37. Let’s peek at Civale’s pitch arsenal to decide whether to buy or sell, though many might be saying stay away.

Outside of the four-seamer and curveball usage swap, Civale’s pitch mix looks similar to 2021. However, Civale’s velocity dropped over one mph on the cutter, curve, and four-seamer. 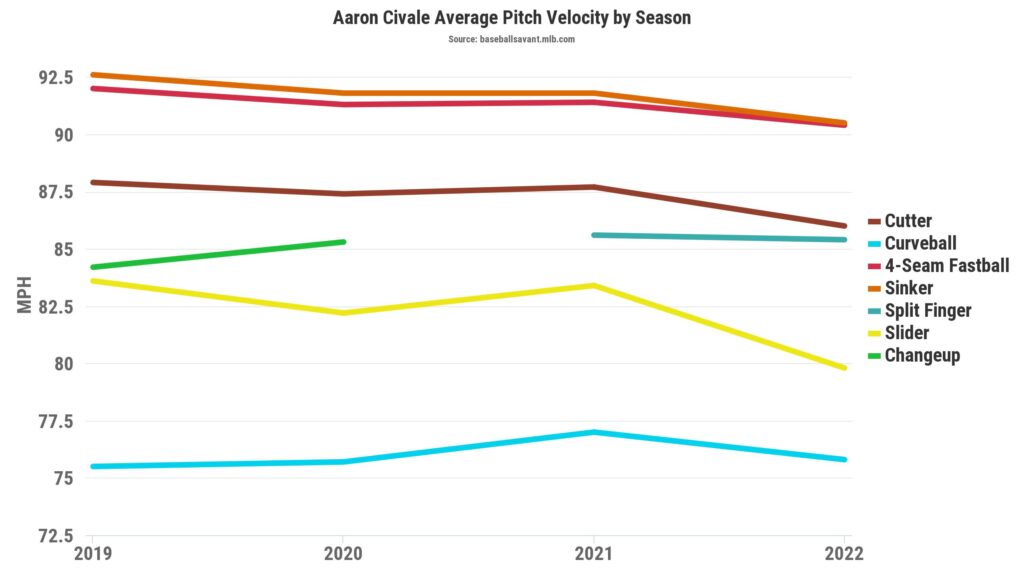 Most notably, Civale’s cutter and curve dropped in average velocity and increased slightly on spin rates around 50-100 RPM. Unfortunately, outside of Civale’s curveball – all pitches have a batting average and wOBA above .400. 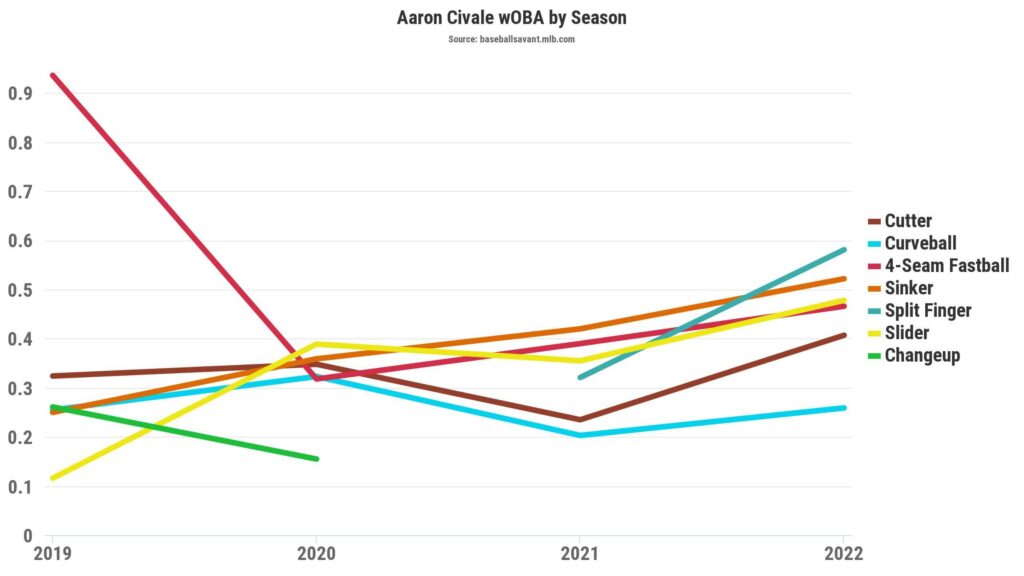 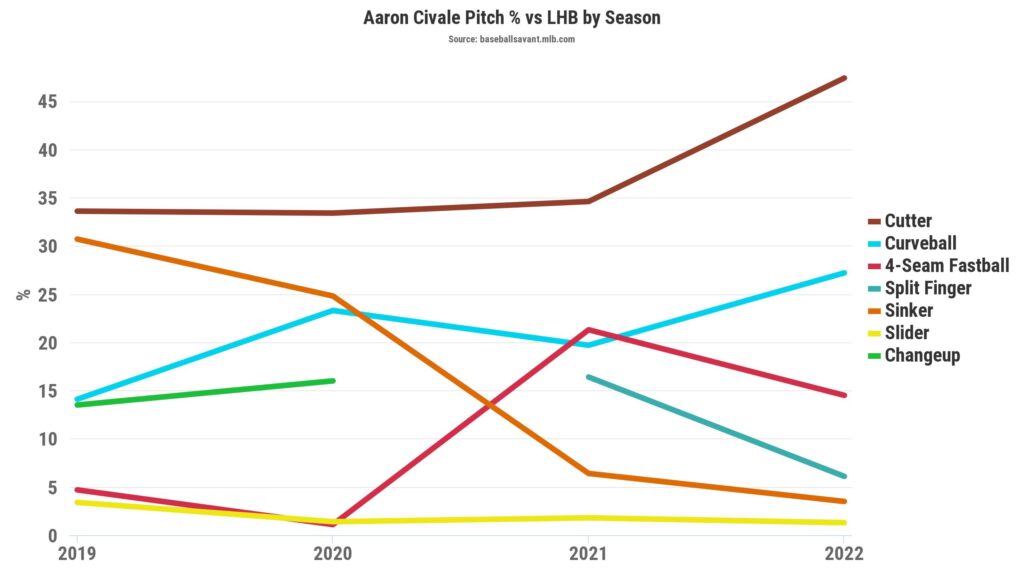 In 2022, the results on the cutter and four-seamer haven’t looked great compared to 2021. 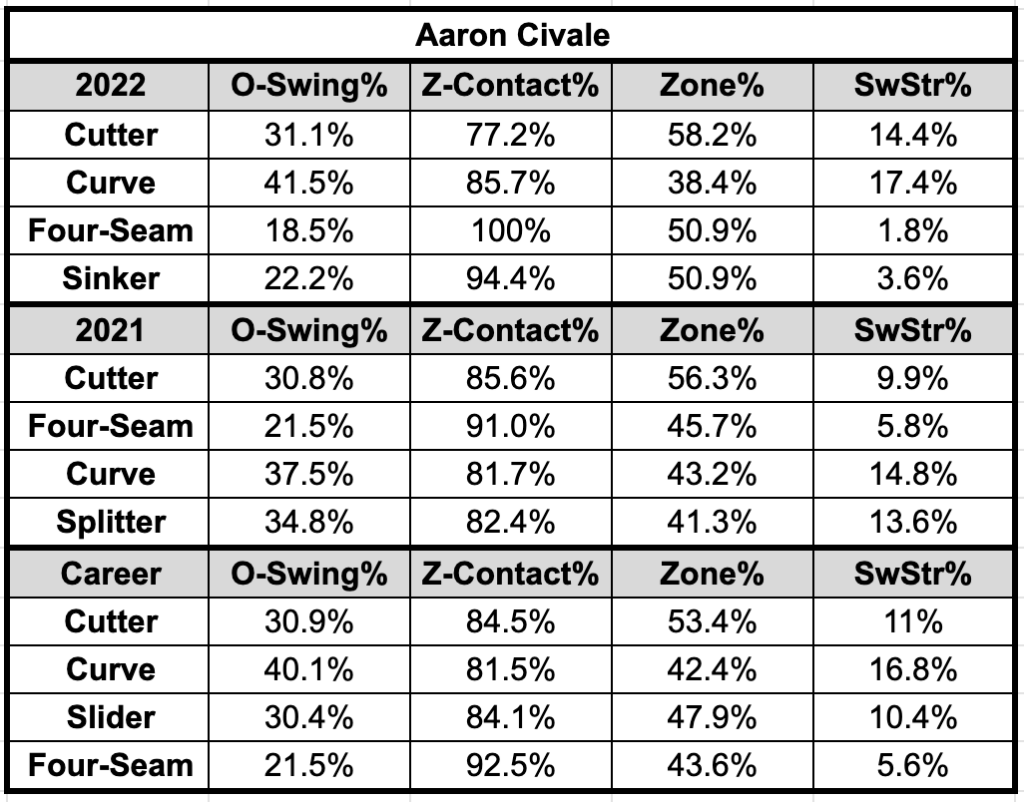 Civale’s curveball elicits the most whiffs with a 42.3% Whiff% up from 34.3% with similar results. The same trend applies to the swinging-strike rate. Also, Civale is throwing a couple of pitches in the zone more and giving up more contact, yet the overall zone rate remains near the career average. He increased the curveball usage by nearly six percent against lefties and righties. Interestingly, Civale’s curve has generated more swings and misses outside the zone, with a 37.8% O-Swing% in 2021 to 41.5% in 2022. 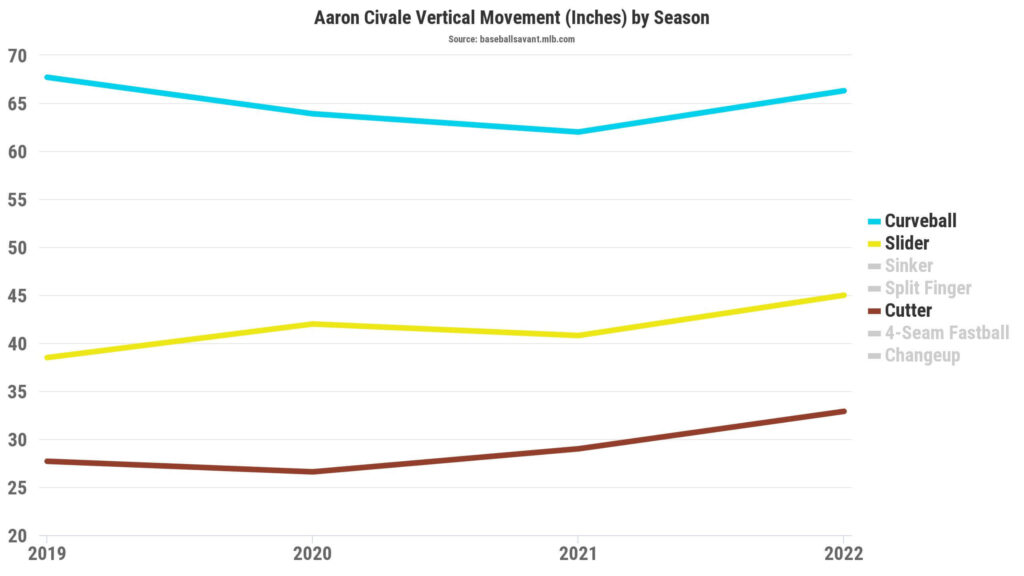 Civale throwing his best pitch more in the curveball with positive results adds to the intrigue to buy rather than sell. The curve has more than four inches of vertical drop with 6.7 inches (2022) versus 5.5 inches (2021) versus the average. That aligns with the swinging-strike and chase rates on the curve.

After 14 quality starts (42.4%) in 2020 and 2021, Civale should eat more innings and post quality starts moving forward. Unfortunately, last Friday, Civale got lit up again for six earned runs with seven hits, two walks, and two home runs plus five strikeouts in 4.2 innings against the Twins. The curve performed well with a 67% Whiff%, though not many called strikes for a 31% CSW%. However, Civale gave up eight hard-hit batted balls, which isn’t a recipe for success.

The BAT projects Civale for a 4.93 ERA, 1.31 WHIP, 17.8% strikeout rate, and 6.2% walk rate. Ignore the ERA because the WHIP and low walk rate should be the starting point to buy rather than sell. The rest of the season ratios indicate the projection systems expect Civale to post quality ratios to lower his ERA.

It’s a matter of if, not when Civale will improve throughout the season. I expect Civale’s Swing-Take Run-Values to regress positively in the heart of the zone, with the potential for the shadow area to follow suit. However, hitters have swung more in the heart of the zone in 2022 at 79%, up from 73% in 2021 and 66% in 2020. That indicates hitters might be attacking pitches when he throws them in the zone, meaning he’ll need to generate weak contact or more groundballs as a possible path to success.

It’s probably a good idea to churn on the waiver wire and look to pick him up later. With the BABIP and LOB% likely regressing, it will improve the ratios moving forward. Civale uses four different pitches at a double-digit rate, with two possessing above-average movement profiles, so there’s a sliver of hope.