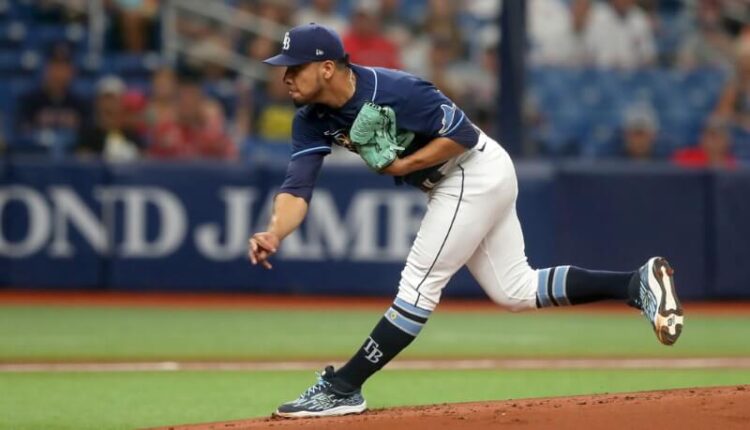 In last week’s installment of the fantasy baseball buy or sell series, we broke down two exciting young arms in Josiah Gray and Cristian Javier. This week, we have two more young pitchers with early ADPs in Draft Champions leagues on NFBC near each other. In dynasty leagues, Luis Patiño and Jesús Luzardo possessed a ton of prospect hype. Unfortunately, Luzardo struggled with the Athletics, but both got traded to a new team. We’ll look at what happened with Patiño and Luzardo in 2021 as an early look to the 2022 fantasy baseball season.

In a massive deal where the Tampa Bay Rays dealt Blake Snell to the Padres, the Rays acquired Luis Patiño, Francisco Mejía, Cole Wilcox, and Blake Hunt. From a redraft and dynasty perspective, Patiño possessed a ton of prospect hype and name value. Patiño briefly made his MLB debut during the 2020 season with 17 1/3 innings pitched primarily in relief with a 5.19 ERA, 1.85 WHIP, 24.7% strikeout rate, and 16.5% walk rate. Granted, it’s a small sample, but Patiño struggled.

Then in 2021, the Rays let Patiño pitch as a starter with eight out of 15 games started, with five innings or more (45 1/3 innings). Towards the end of May, Patiño missed time due to a finger injury. Before the injury, Patiño threw 15 innings with no appearance longer than four innings. However, the results looked decent in the small sample with a 3.60 ERA, 1.07 WHIP, 30.6% strikeout rate, and 6.5% walk rate.

In July, Patiño returned to the majors and logged 62 1/3 innings pitched with a 4.48 ERA, 1.32 WHIP, 20.3% strikeout, and a 9.2% walk rate. The .261 BABIP might increase, but the 72.5% LOB% could improve. However, as a flyball pitcher, the BABIP could remain lower over time. We expect a higher K-BB% for Patiño, so hopefully, that ticks up with more reps. There’s a bias, fair or unfair, about the Rays that could make it hard to rely upon and project Patiño’s workload in 2022.

In 2021, Luis Patiño relied on the four-seamer and slider, accounting for just under 87% of his total pitches. Patiño threw the four-seamer 60.5% of the time, and it had above-average vertical movement with 2.2 inches more than the average pitch.

The four-seamer performed well with an 11.3% swinging-strike rate, .286 wOBA, and 23.1% whiff rate. Patiño pounded the zone with the four-seamer, evidenced by the 61.6% Zone%. Another positive note on the four-seamer that aligns with the vertical movement – Patiño elicits a decent amount of whiffs high in the zone, possibly due to the fastball.

Although Patiño’s slider doesn’t have a high chase rate at 27.8%, it seems like his pitch elicits whiffs with a 14.2% swinging-strike rate, .278 wOBA, and 33.3% whiff rate. The slider possesses above-average movement, with 3.1 inches more break. Outside of those two primary pitches, Patiño sprinkles a changeup at 5%, a curveball at 4.8%, and a sinker at 3.2%.

Unsurprisingly, with the heavy zone rate on the four-seamer, Luis Patiño thrived in the heart of the zone and performed decently in the shadow areas. 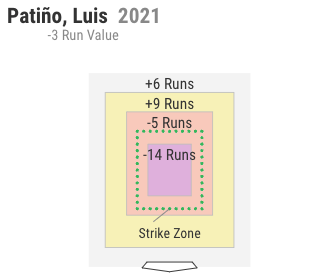 It’s positive to see Patiño have two decent pitches in the four-seamer and slider that guide us towards buying more than selling in 2022.

Should We Buy or Sell Patiño?

Interestingly, towards the end of the 2021 season, Luis Patiño increased the fastball usage that peaked at over 63%. The slider dipped, but not significantly as one of his top whiff pitches. It’s something to monitor if Patiño adjusts the pitch mix early and during the 2022 season.

Per RosterResource, Luis Patiño slots into the fifth spot in the Rays rotation with the electric Shane McClanahan, Drew Rasmussen, Corey Kluber (possible revival), and the underrated Ryan Yarbrough. Patiño possesses the talent to build upon the 2021 season and make adjustments after the late-season struggle as a starter.

Early STEAMER projections have Patiño with a 4.26 ERA and 1.30 WHIP. They also have Patiño with a 24.6% strikeout rate and a 9.6% walk rate in 118 innings. STEAMER expects Patiño’s BABIP to rise to .282 with an identical BABIP at 73.3%. Overall that’s a fair projection with the idea that Patiño will increase the innings but could struggle once again. Patiño’s control concerns us, evidenced by the WHIP, but if the stuff improves, he could give us strikeout upside as a streamer in 2022.

If there’s an organization we want to target for pitching, it involves the Marlins, who acquired former top prospect Jesús Luzardo. However, with Oakland, Luzardo struggled. Then with Miami, he stunk, but be patient as we dig a little deeper whether to buy or sell Jesús Luzardo.

One area to monitor with Luzardo involves the pitch mix change with the Marlins, where he dropped the fastball usage and upped the slider usage. That pitch data comes via FanGraphs, but the Baseball Savant data indicates Luzardo’s fastballs stunk. 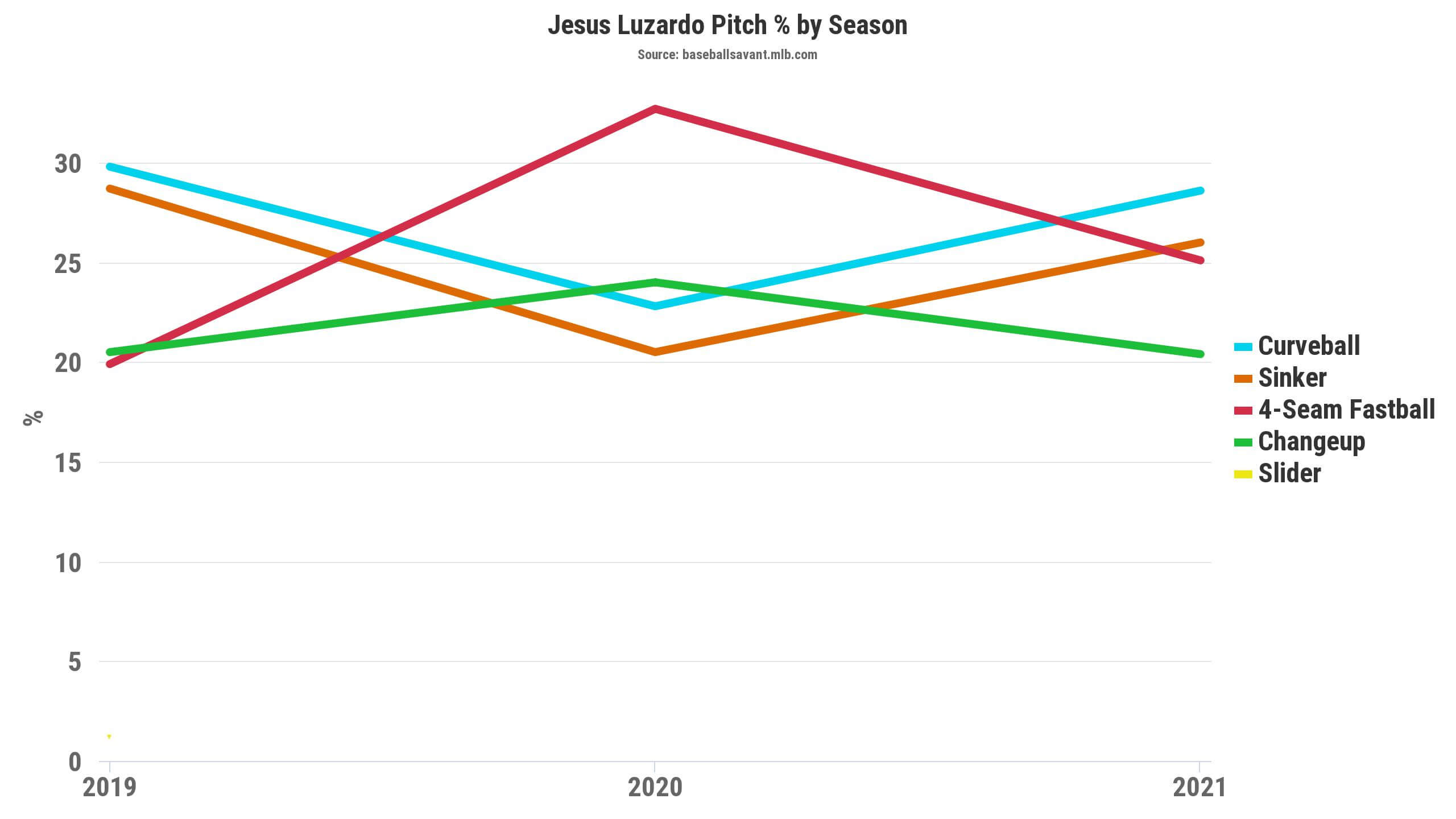 Baseball Savant breaks up Luzardo’s fastball into the sinker and four-seamer that he used 25-26% of the time. Unfortunately, the sinker resulted in a .421 wOBA, and the four-seamer equally stunk with a .454 wOBA. FanGraphs lists Luzardo’s best pitch as a curveball, but Baseball Savant labels it a slider. Regardless, we know Luzardo’s breaking pitch looks filthy with a 42.4% whiff rate and .260 wOBA allowed.

One positive note includes Luzardo’s ability to use four different pitches over 20% of the time. However, we hope Luzardo improves both fastballs. Luzardo uses his changeup as a possible weapon against righties since he throws it a ton against opposite-handed hitters. Unfortunately, Luzardo’s changeup didn’t look that effective with a .378 wOBA yet a 16.9% swinging-strike rate and 35% whiff rate. The swing and miss chart lowered our excitement to buy rather than sell Luzardo since it dipped towards the end of the season. 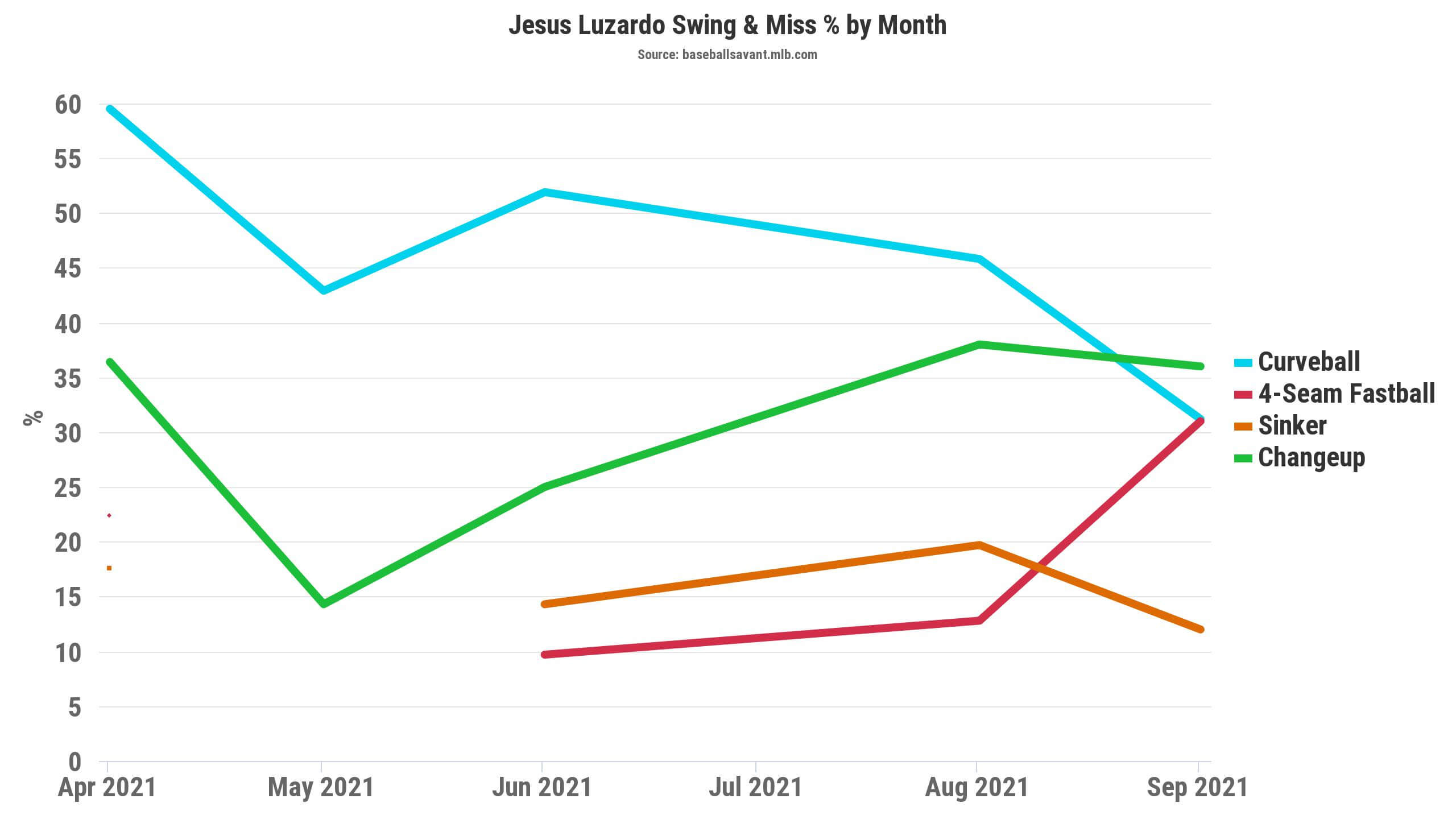 Luzardo’s pitches possess a decent horizontal movement, with three pitches having an above-average break. However, Luzardo’s best weapon in the curveball doesn’t stand out movement-wise. Regardless, it’s the only pitch for Luzardo with a negative Run-Value on Baseball Savant at -3.

Should We Buy or Sell Luzardo?

Heading into 2022, we have more faith in Jesús Luzardo, meaning buy into the potential more than sell. Although the entire 2021 season for Luzardo looked awful and put a sour taste in the mouths of fantasy managers, look for a bounce back. With the Athletics and Marlins, Luzardo ran into some misfortune with a LOB% of 64-65%. Assuming the strand rate regresses, the ratios should improve for Luzardo.

The projected Marlins rotation looks full with Sandy Alcantara, Trevor Rogers, Pablo López, and Elieser Hernandez. Jesús Luzardo looks to fill the final spot in the starting rotation, but we’ve seen López and Hernandez struggle with injuries in past seasons. If other fantasy managers look at the early STEAMER projections, that presents an additional buying opportunity in dynasty or keeper leagues. STEAMER projects Luzardo for a 3.94 ERA, 1.32 WHIP, 23.7% strikeout rate, and 9.2% walk rate in 106 innings. That projection system expects positive regression in LOB% to 73.7% and BABIP to .294.

Luzardo likely throws more than 106 innings with positive regression in the strand rate and BABIP. However, the pitch mix adjustment with the Marlins plus the recent pitching success suggests we should buy rather than sell Luzardo in 2022. With an early NFBC ADP around pick 300, target Luzardo Luis Patiño in that range.