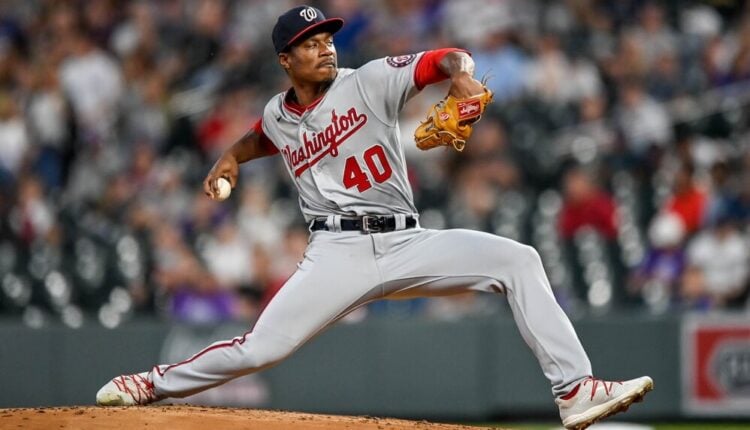 In late August 2021, Josiah Gray landed in the fantasy baseball buy or sell series that included Triston McKenzie and Néstor Cortes. All three pitchers surged down the stretch for fantasy baseball squads. Interestingly, Gray and another compelling pitcher in Cristian Javier sit near each other in the early NFBC ADP. We’ll dive into the splits for Javier as a starter and reliever, then break down Gray’s 2021 and early 2022 outlook.

The .277 BABIP seems reasonable, but the LOB% will possibly even out with more innings pitched. Even the K-BB% for Gray dropped from 19.2% to 9%, with the walk rate increasing and strikeout rate dropping. Gray’s pitch mix didn’t change much either, and pitch velocity didn’t change, so that’s not a concern there.

We’ll keep this section brief because we covered Josiah Gray’s pitch mix in the August article. Gray’s two breaking pitches look filthy and miss a ton of bats. The curveball boasts a 23.1% swinging-strike rate, 47.8% whiff rate, and .256 wOBA. Meanwhile, the slider’s swinging-strike rate sits at 23.1%, with a 45% whiff rate and .258 wOBA. 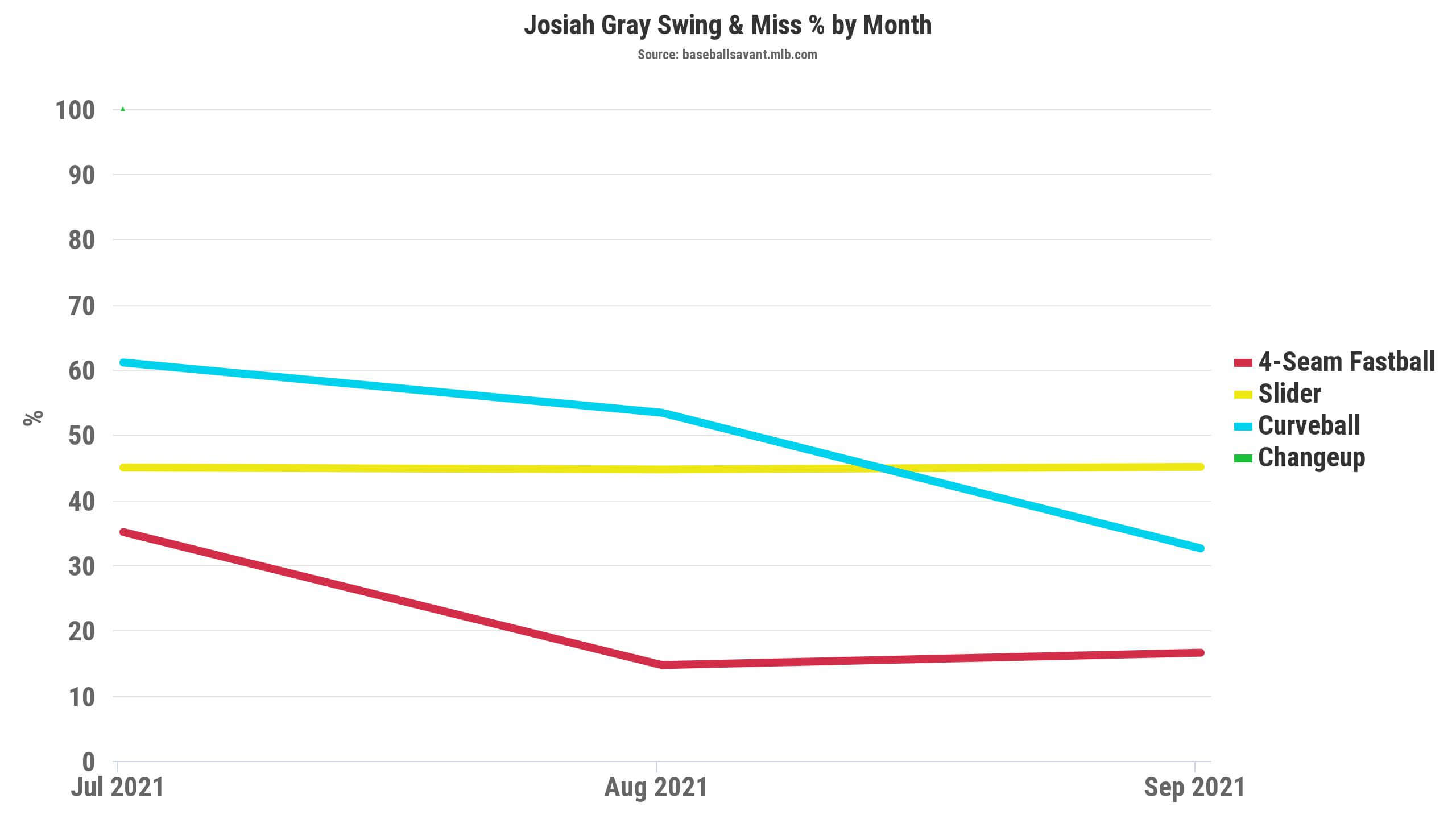 Although Gray’s slider and curveball don’t stand out movement-wise, they’re weapons in the arsenal that gives him the strikeout upside. On the flip side, Gray’s four-seamer possesses 2.9 more inches of vertical movement compared to the average. Unfortunately, the four-seamer doesn’t elicit many whiffs with a 17.8% whiff rate. However, hitters crushed the four-seamer in 2021 with a .282 BA, .620 SLG, and .414 wOBA.

Gray struggled in the heart of the zone with a +5 Run-Value with a -8 in the shadow area. It makes us wonder if Gray could locate the four-seamer better to improve the results. Overall, it’s positive that Gray possesses two breaking pitches that whiff bats. We’ll also want to monitor Gray’s changeup that he throws 3.2% of the time since it had a 9.1% whiff rate and .352 wOBA allowed. If Gray could use that offspeed pitch as a weapon against lefties, that only adds to the arsenal.

Opportunity and innings pitched shouldn’t be an issue for Josiah Gray in 2022 since the Nationals overhauled their roster. RosterResource shows the National rotation as Stephen Strasburg (injured), Patrick Corbin (yikes), Josiah Gray (oh baby), Josh Rogers (who), and Paolo Espino (sneaky veteran). There’s a chance Patrick Corbin bounces back in 2022, although it’s safe to bet that Strasburg battles injuries again. Gray looks like the most exciting pitcher in the Nationals rotation with an early Draft Champions ADP on NFBC of 272 right behind Kyle Hendricks and in front of Cristian Javier, who we’ll discuss next.

In 2021, Cristian Javier threw nine straight starts before the Astros moved him into the bullpen. Around that time, when he went to the pen, Jake Odorizzi returned from an injury. On the season, Javier finished with a 3.55 ERA, 1.18 WHIP, a 30.7% strikeout rate, and a 12.5% walk rate in 101 1/3 innings pitched. Not bad, right. 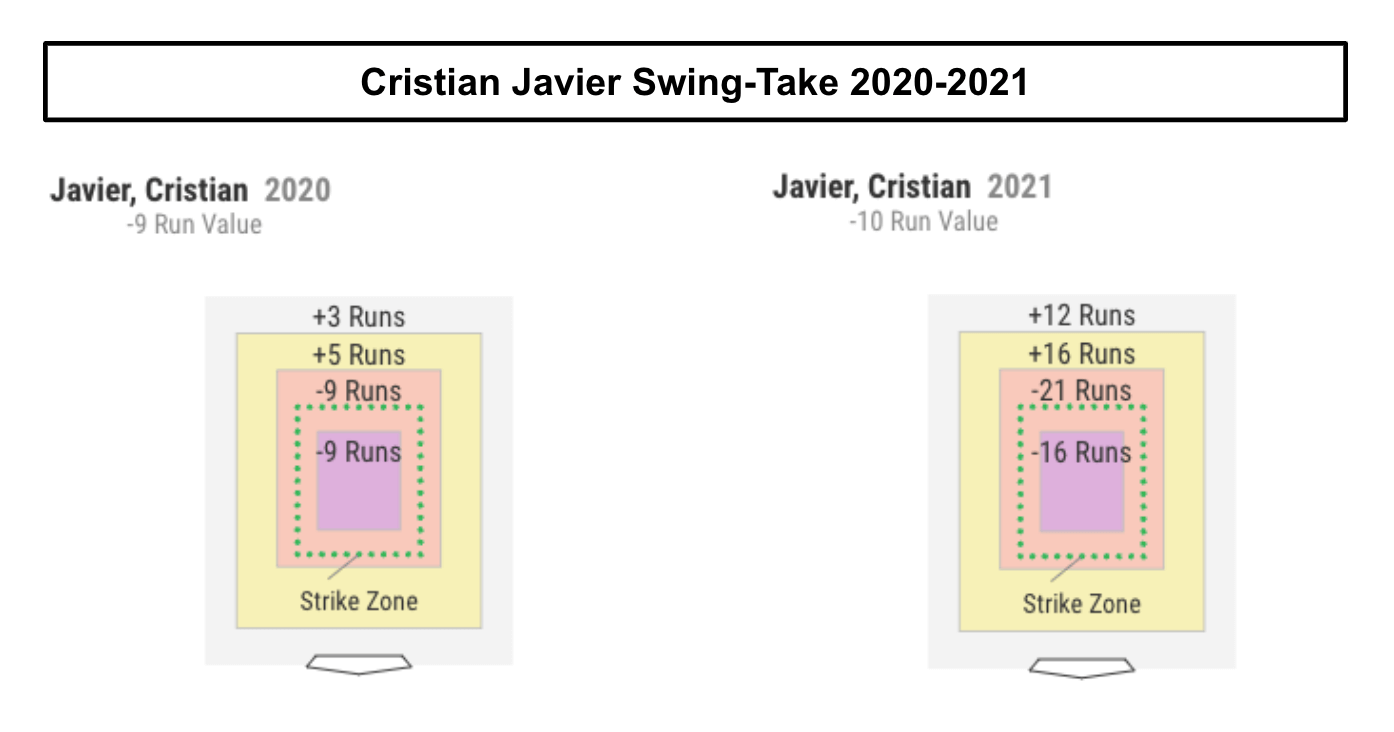 In both 2020 and 2021, Cristian Javier thrived in the heart and shadow areas. Javier’s arsenal reminds us of Freddy Peralta. However, Peralta’s fastball performs better with a .265 wOBA allowed in 2021 with a 31% whiff rate.

Should We Buy or Sell Javier?

A couple of weeks back, I dug into Luis Garcia and José Urquidy. We noted that the Astros lost their pitching coach, so it’s unsure how that will affect their pitching staff in 2022. Cristian Javier likely starts the season in the bullpen with the likes of Jake Odorizzi. We included Javier and Josiah Gray in this week’s buy or sell because they have early Draft Champion ADPs on NFBC around pick 270. I buy into Gray with the arsenal and projected opportunity, but Javier’s team context with the Astros might warrant drafting him as a reliever. There’s a chance Javier makes his way into the starting rotation via struggles or injuries, but hopefully, Javier improves the fastball or adds an effective secondary pitch.