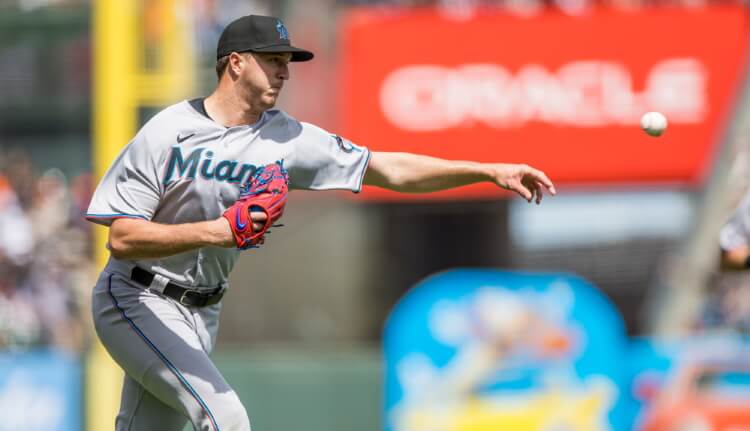 In this week’s installment of our pitcher buy or sell series, we’re examining three more starting pitchers with one deep-league waiver wire name. The selection process for these pitchers usually begins with watching a start, noticing something interesting, and figuring out the why. For Trevor Rogers, he struggled early on, particularly with the changeup. Meanwhile, a lesser-known pitcher in, Nick Martinez, popped some filthy changeups that drew me in. Then, whenever the Giants help a pitcher re-emerge, we must pay attention.

After a breakout 2021 season with a 2.64 ERA, 1.15 WHIP, 28.5% strikeout rate, and 8.4% walk rate in 133 innings, Trevor Rogers started slow. In the first 6.2 innings through two starts, Rogers allowed nine earned runs with five walks and six strikeouts against the Giants and the Phillies. 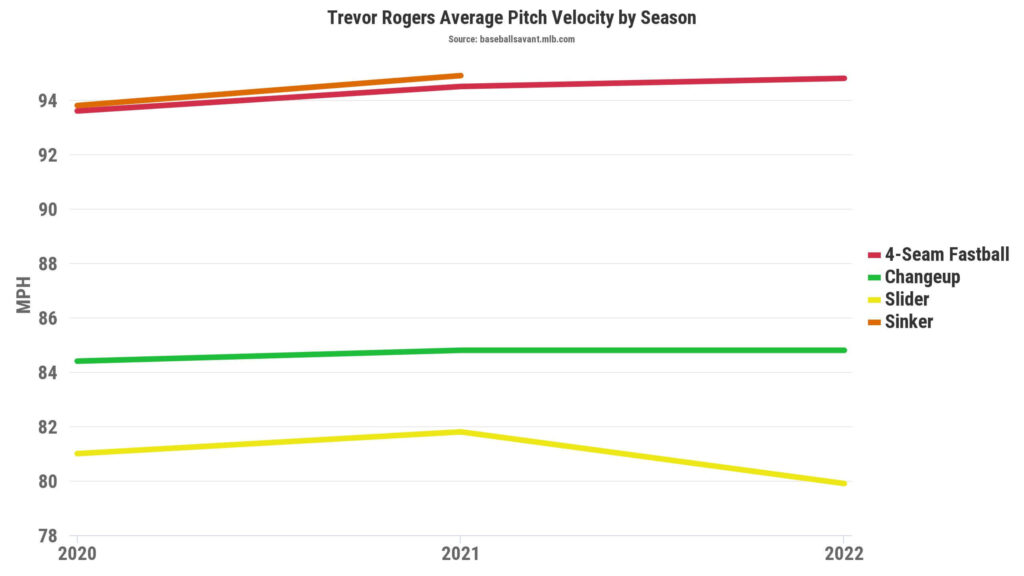 Thankfully, fantasy managers with Rogers can breathe a sigh of relief after a 40% Whiff% and 32% CSW% against the Braves on Friday. The overall 33% Whiff% and 31% CSW% aligned with the positive results of five scoreless innings with four hits, two walks, and four strikeouts. Through three starts, the changeup boasts a 23.5% Whiff%.

Again, it’s early, but Rogers’ changeup isn’t dropping as much in 2022, by almost two inches less. The changeup still possesses above-average vertical movement, but the 5.4 inches versus the average decreased to 2.9 inches in 2022. 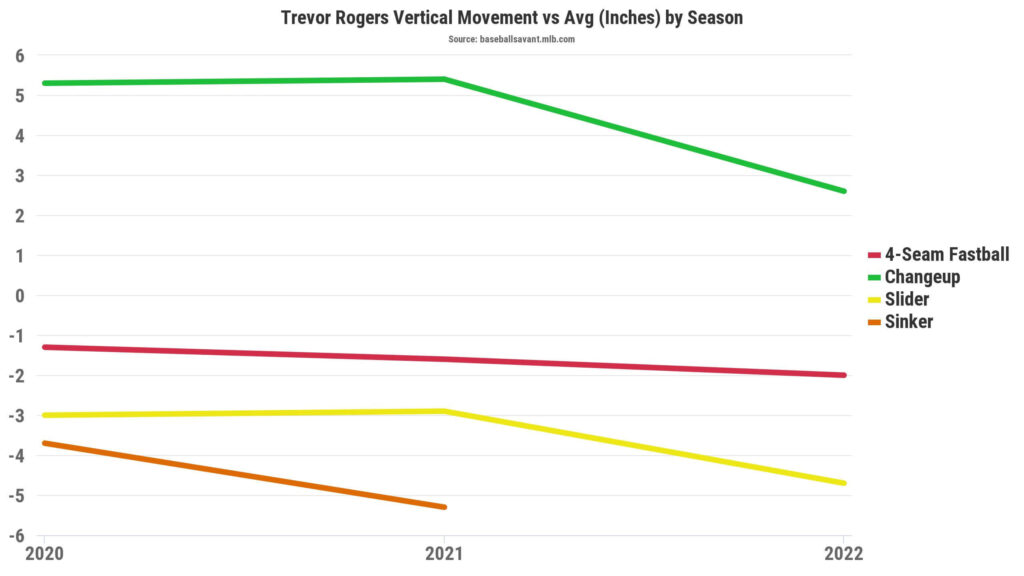 Before Friday’s start against the Braves, Rogers’ changeup allowed a 100% Z-Contact% and Contact%. The same trend applies with the dip in chase rate, as evidenced by the 28.6% O-Swing% versus 46.3% in 2021. There’s a chance the movement profile difference on the changeup could mean it’s more hittable in the early goings. 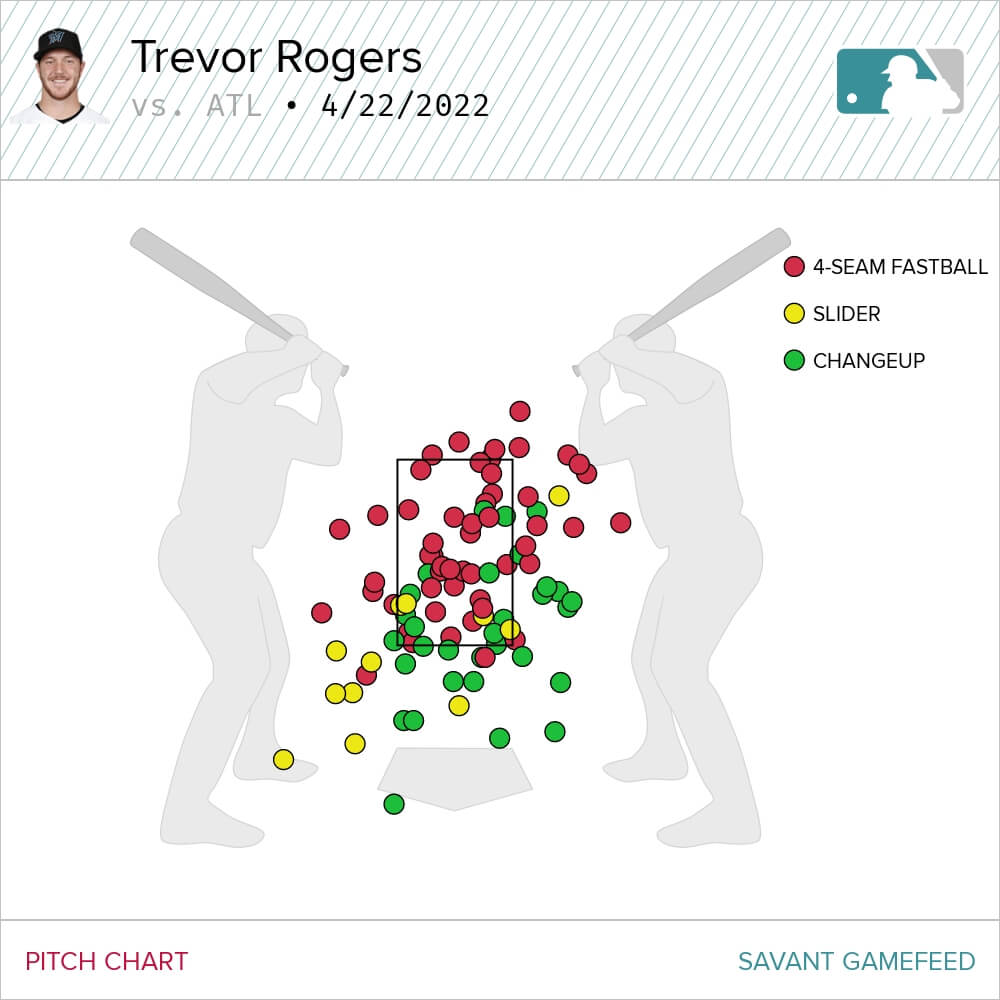 Rogers pounds the zone with the four-seamer with a 65.4% Zone%. That’s evident when watching Rogers pitch and reflected in the data. The four-seamer movement should help generate weak contact, but it also boasted a double-digit swinging-strike rate in 2021, with the same happening in 2022. 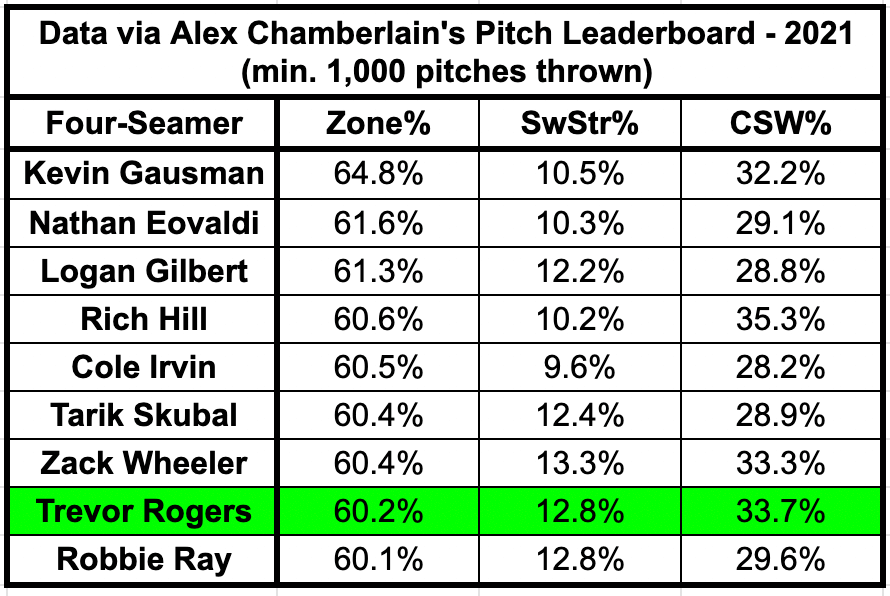 Per Alex Chamberlain’s Pitch Leaderboard, Rogers tied for second with a 12.8% SwStr% amongst starting pitchers with a Zone% north of 60% and 1,000 four-seamers thrown. 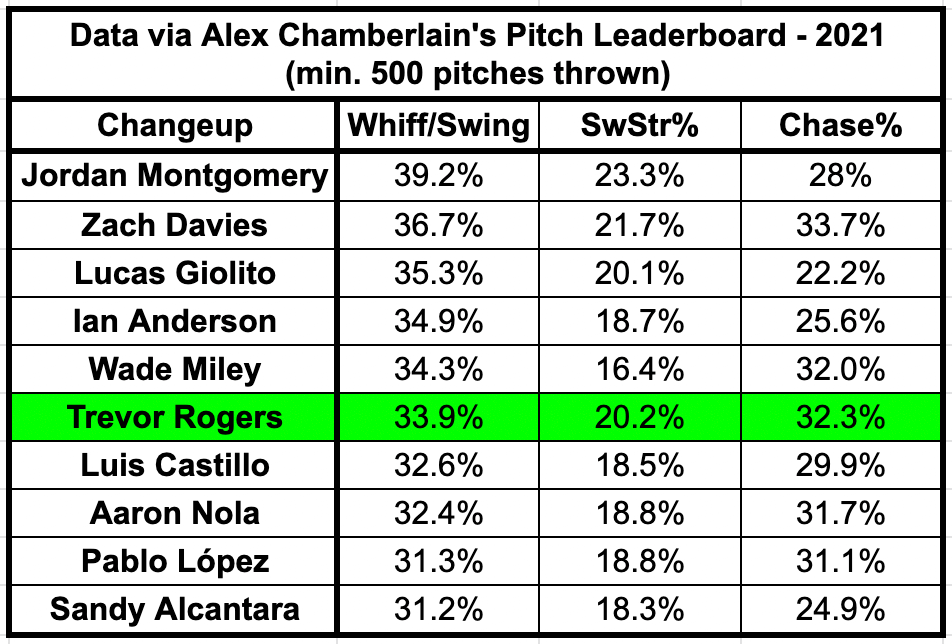 Rogers also ranked sixth in 2021 amongst starting pitchers, with 500 changeups thrown in whiffs per swing. Hopefully, Rogers’ changeup will bounce back closer to the elite levels in 2021.

The slider for Trevor Rogers remained effective, particularly against lefties, as his second-most used pitch in 2021 and 2022. In 2021, Rogers used the slider 14.8% of the time overall versus 22.7% of the time against same-handed hitters. That same trend applied with the slider thrown 35.6% of the time versus lefties and 17.7% overall in the small 2022 sample. 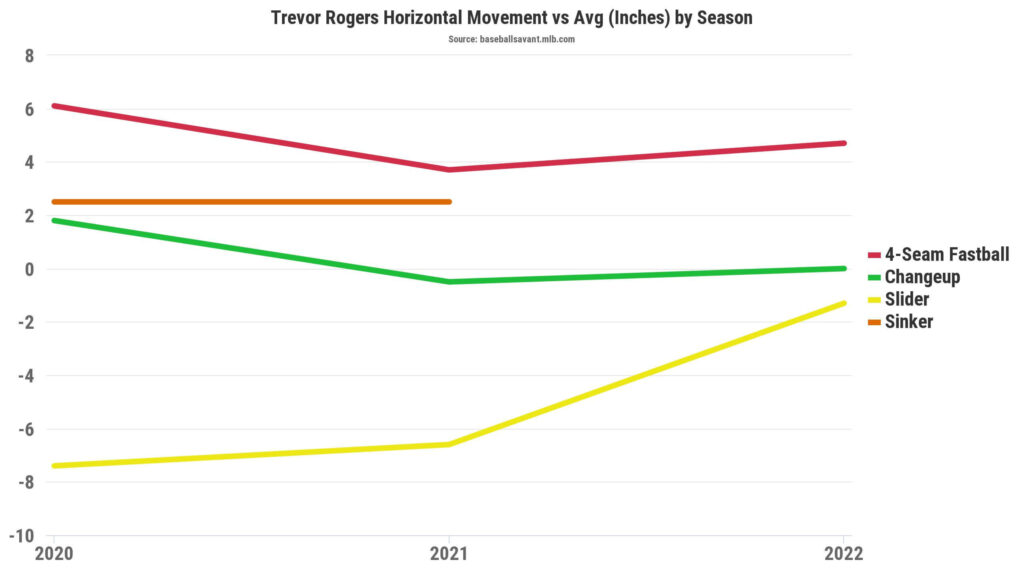 When sorting through the pitch movement for Rogers, the slider pops out. On Tuesday, an underrated writer and analyst in Cool Whip noticed release point issues that could be related to the pitch movement changes. Unsurprisingly, the spin-based and observed movement also changed. 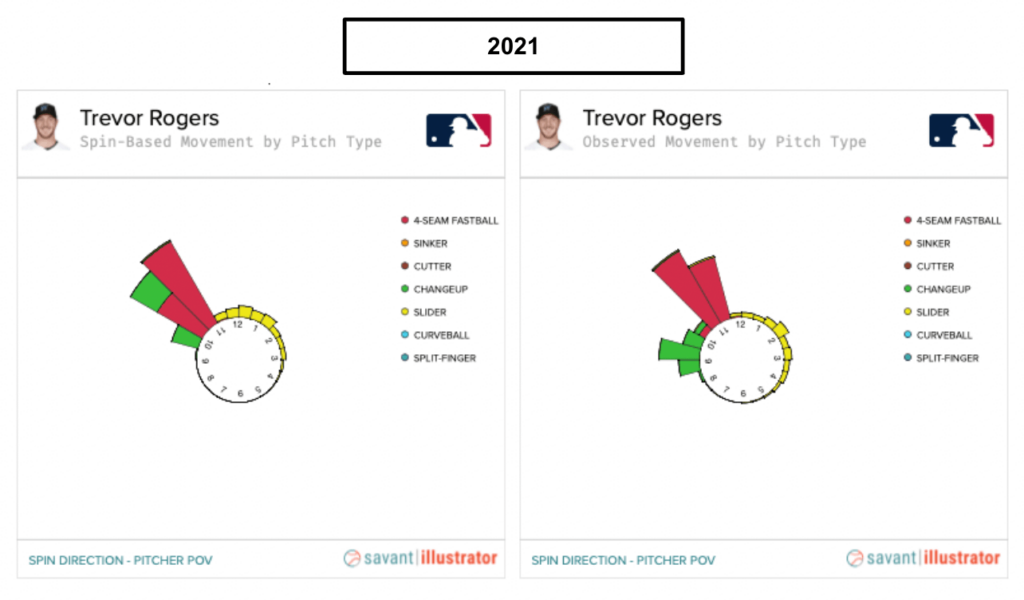 With the decrease in velocity, his slider dropped over 100 RPM, plus almost nine more inches of break. Although the slider doesn’t possess above-average movement, having a slider go from 1.7 inches of break to 10.3 in 2022 raises eyebrows. 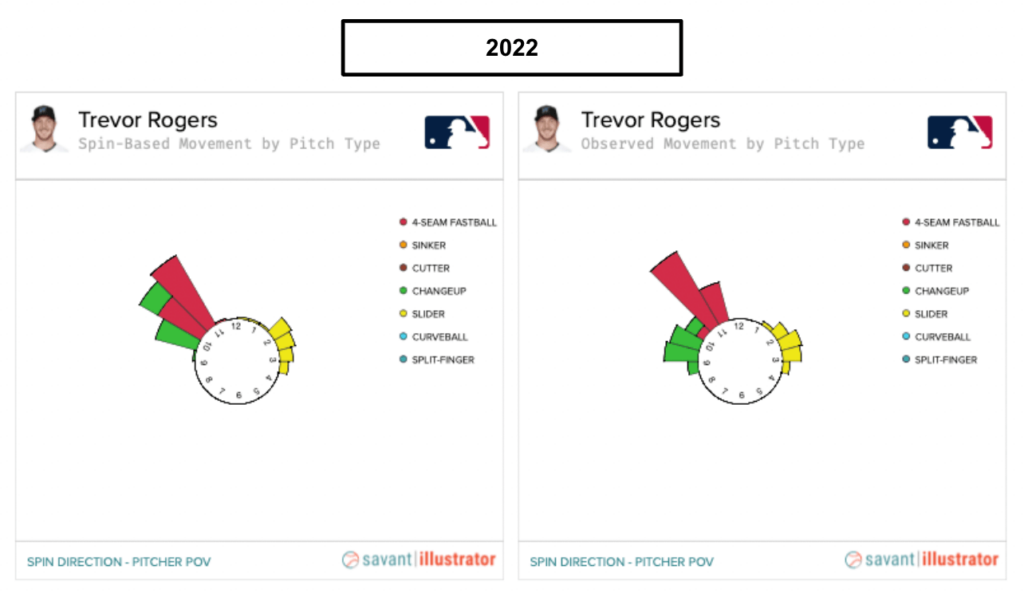 The spin-based and observed movement align with that information, meaning the slider is breaking or sweeping more with the reduced velocity and profile. We’ll see if the decreased velocity and movement profile sticks on the slider since more horizontal movement typically translates into weaker contact. It’s early, but the slider allows a .667 SLG and .372 wOBA on 41 sliders thrown in 2022 versus a .364 SLG and .279 wOBA in 2021.

Before the Atlanta start, I’d buy rather than sell Trevor Rogers, given the rocky start. That still applies after seeing the whiffs on the changeup. We’ll want to monitor the slider velocity and movement changes since that’s a weapon for him against lefties. Assuming the four-seamer remains effective, we hope Rogers’ changeup returns to the 2021 form eliciting a high whiff rate. If there’s an organization to put faith in regarding changeup development, it’s the Marlins.

Martinez finished with four hits, two earned runs, five walks, and four strikeouts in 4.2 innings via 102 pitches. That’s an ugly line, but Martinez’s overall 32% Whiff% and 29% CSW% looked decent. As seen on film, Martinez’s changeup made hitters look silly with a 46% Whiff% and 35% CSW%. Thankfully, we have access to data beyond the box score that helps us decide whether to buy or sell.

It’s a small sample, but Nick Martinez’s pitch arsenal looks enticing via the movement profiles. Four of Martinez’s five pitches have above-average movement, with two popping in vertical and horizontal movement versus the average. 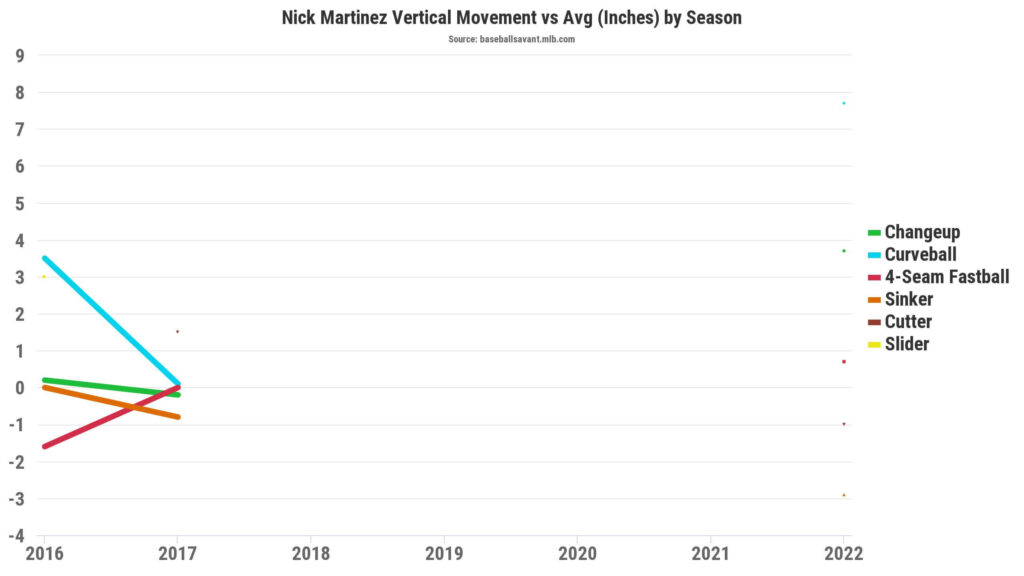 Unsurprisingly, Martinez’s changeup possesses above-average drop and break that translates into a 42.4% Whiff%. Assuming a large enough sample, that would’ve ranked Martinez near the league leaders in 2021. It’s positive to see Martinez have two pitches with a swinging-strike rate above 20% in the changeup and cutter. However, the cut fastball had a 42% CSW% in Friday’s start.

Martinez hardly uses the curveball, just under 12% (11.7%), but the deuce has 59.1 inches of drop, translating into 7.7 inches more than the average. As of Monday, Martinez’s curve ranked seventh in vertical movement versus the average amongst right-handed curveballs. Martinez seemingly made actionable changes to his arsenal, with four out of five pitches possessing above-average movement.

Although Nick Martinez never surpassed five innings, the pitch counts remain high with 80, 83, and 102 over the first three starts. Hopefully, Martinez improves the efficiency to tap into quality starts. The deep pitch mix for Martinez adds to the intrigue. However, savvy fantasy managers roster him in 90% of leagues in NFBC formats, meaning he serves as a deep-league streamer. On Fantrax, Martinez has a roster rate around 40%, so check to see if he’s available versus the right matchup. I’d buy rather than sell Martinez’s arsenal, though tread with caution.

After the Royals and Jakob Junis parted ways, Junis signed with the Giants in March on a one-year deal worth $1.75 million. Junis started off in Triple-A, then the team recalled him due to Anthony DeSclafani hitting the injured list with an ankle injury.

Junis debuted against the Nationals Friday after an opener in Sam Long and finished with five scoreless innings as he allowed three hits and zero walks with four punchouts. 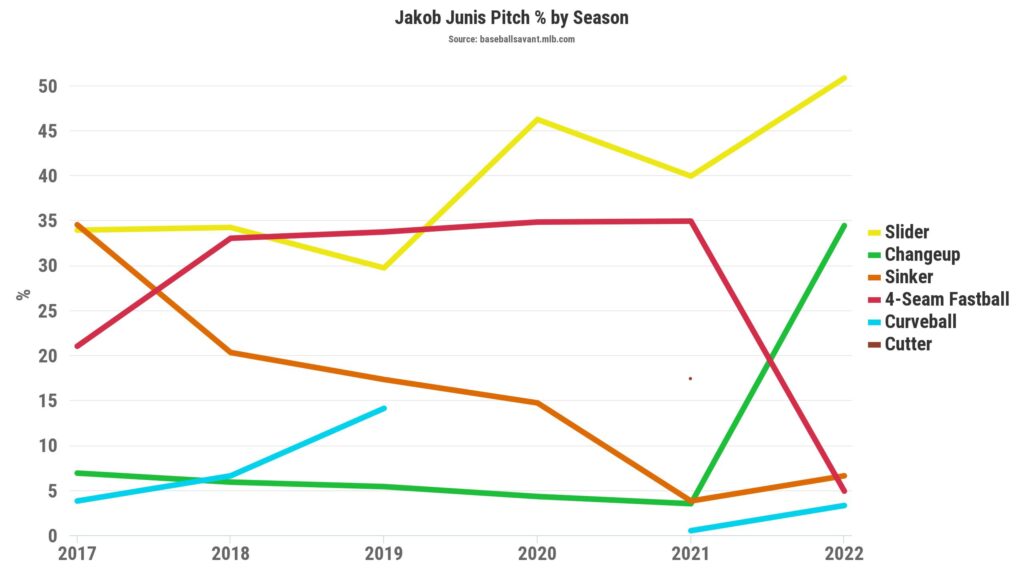 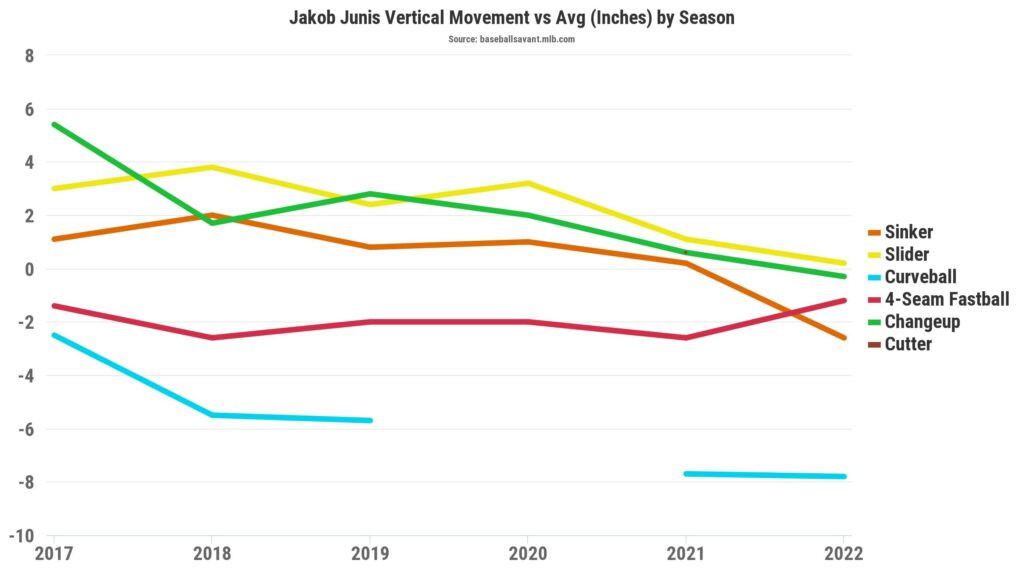 As a pitcher typically relying on the four-seamer and slider, Junis’s changeup never stood out movement-wise outside of 2019 with above-average drop. We note that because the narrative around Junis involved highlighting the slider. It’s hard for a pitcher to rely on one pitch, especially for a starter without premium velocity.

If it feels like we’re overreacting to an uber small sample for Jake Junis, then that’s probably true. One organization to put our faith in for pitching includes the Giants. Throughout Junis’s career, the slider remained the only pitch with a career swinging-strike rate in the double-digits. In the smaller samples of 2017 (98.1 IP) and 2020 (25.1), Junis possessed a second pitch with a double-digit swinging-strike rate.

The role remains the question mark, but keep an eye on Junis in deeper formats if he develops a second whiff pitch in the changeup. It’s within the range of outcomes for Junis to improve a second quality pitch, which would lead us to buy more than sell, given the team context and early pitch mix potential.