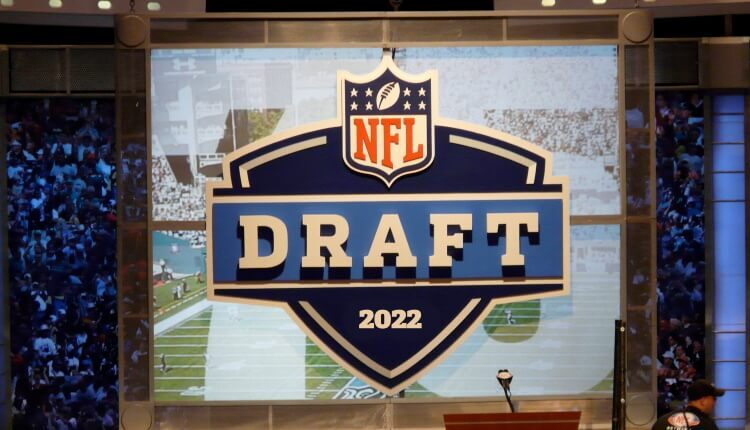 Tomorrow is the big day. Dreams finally become a reality for 32 young men as they hear their names called in the first round. This 2022 mock draft features a double-dip at the WR position by the Packers in an attempt to keep Rodgers happy. It also includes a couple of big-time pairings on defense for the Ravens and the Chargers. Nobody wants to read all the way to their team’s pick only to find that I “traded” it away. So for that reason, I left the first round unadulterated; no trades. It must be noted that in real life, it’s very possible that the Commanders and Patriots trade back. It’s also likely that teams looking for a QB trade their way back into the 1st round. Without further adieu, Mock Draft 1.0.

There has been a ton of recent buzz that Hutchinson might not be the pick here. Rumor has it that the team may value athleticism and metrics above production. Ikem Ekwonu could also be the pick here in an attempt to keep franchise QB, Trevor Lawrence upright.

Keep it simple. If the Jags take Walker, the Lions snatch Hutchinson. If the Michigan man gets to stay in the state the fanbase will surely eat this pick up.

The Texans have plenty of holes to fill, but they start up front. If Davis Mills indeed is the quarterback of the future, then protecting him becomes priority number one. Ickey is the best offensive lineman in this draft making this an easy selection.

Big Apple Sauce. Ahmad Gardner ends up on a New York team one way or another. If not this pick then the next. The Jets are feigning for talent here and Gardner is the clear-cut top talent amongst DBs in this year’s draft.

Atrocious offensive line play forces New York’s hand here and they snag Neal. The Alabama tackle should aid in the development of Daniel Jones. RB, Saquon Barkley is a winner here as well, with the big man opening up running lanes.

Yes, the Panthers need a quarterback. No, there is not a QB good enough to be taken 6 overall. Baker Mayfield is still out there along with Jimmy G, so there is no rush to take a signal-caller here. Instead, it would be wise to start fixing an offensive line that gave Sam Darnold zero time to throw the ball (accurately) and McCaffrey no room to gallop.

The Jets sniped Sauce, so the Giants get the next best thing in Stingley. It’s very possible that Stingley drops out of the top 15. His recent tape has shown a decline in production and teams have shown some concern. However, his length, speed, and freakish ball skills make him a steal for any team after pick 5.

The knee surgery must have been a huge success. Videos of Williams rehabbing the knee surfaced earlier in the week and—he—looks—great! There’s no way he’s going to be ready for the opener, but by Week 3, 4, or 5 there’s a strong chance that he could be on the field making an impact for this team. In theory, Williams’ ability to take the top of the defense should give TE, Kyle Pitts more one on one opportunities to exploit.

The drop ends here. It really wasn’t that long ago when we were calling Thibodeaux a top 3 pick. Russell Wilson dipped out, the legion of boom feels like a distant memory, things are not the same in the Emerald City. Kayvon Thibodeaux has a chance to become the leader of a new regime in Seattle.

Wilson to Wilson. Announcers everywhere just salivated. The offensive line bolsters young studs like Becton and Vera-Tucker, so the Jets have the luxury of supplying QB, Zach Wilson with another weapon here at pick 10. A receiver of Wilson’s caliber would have this offense looking pretty dangerous on paper.

Hamilton has been drawing Sean Taylor comparisons all off-season. The Commanders could look to recreate some of that magic by taking the safety here. With only 2 picks in the entire draft, Washington can’t afford to miss here. A trade down is certainly not out of the question.

With Aaron Rodgers still looming in the division, the Vikings select the corner out of Washington. McDuffie’s versatility makes him an excellent choice to begin rebuilding this secondary around.

He’s a bit raw yeah, but he also possesses a tantalizing combination of power and speed. This division currently doesn’t have a QB that could run away from this guy, so early production would be expected in this great landing spot (for stats).

Devin Lloyd just feels like a Raven to me. Baltimore has a chance here to recreate the Ray Lewis-Terrell Suggs era with Devin Lloyd and Patrick Queen. Who says no?

This is such a Philly pick. “When you throw it up to him, it’s not a 50-50 ball, it’s more like an 80-20”. Yeah, okay. Drake London screams JJAW 2.0 to me. At the best, he’s Chase Claypool. But the Eagles see a big-bodied wide receiver who would be a much easier target for Jalen Hurts and take him at 15.

Fearing a run on wide receivers, the Saints take Olave here instead of waiting until pick #19. The Saints desperately need some juice in their wide receiver room. Tre’Quan Smith doesn’t seem to be panning out, Marquez Callaway’s fantastic preseason didn’t roll over into the regular season, and we haven’t seen Michael Thomas since Drew Brees retired. Olave has the least amount of question marks out of the remaining WRs on the board.

With Patrick Mahomes and now Russell Wilson in your division, you pair Johnson with Joey Bosa and call it a day. This duo would wreck the AFC West for years to come.

#18 Philadelphia Eagles (from NO)

The defensive line usually does a great job of stuffing the run game early, but when the opposing RB slips through the cracks, it’s noticeable. Nakobe Dean’s sideline to sideline ability would make offenses think twice about running stretch plays and tosses to avoid the heart of the defense. He also looks amazing in coverage, this pick will make Philly fans very excited.

This man has no business being this big and this fast. At 6’6 and 340 lbs., he’s not just a space eater, he penetrates. Davis has routinely shown the ability to fight through double teams and make the big play. One of the safest picks in this draft, it wouldn’t shock me one bit to see him taken sooner.

The Steelers pull the trigger here and secure their future franchise QB. Taking him here gives them a fifth-year option, allowing more time for his overall development. There are many skeptics who do not believe that Willis is ready to start immediately. Due to his simplistic college offense and soft schedule, I happen to be among those skeptics, so I fully expect to see Mitchell Trubisky in Week 1. With Malik’s unique skill set, we could see his OC develop a special package for him, similar to Trey Lance or Taysom Hill.

I’ll give you -150 odds that the Pats trade down here, it’s just what they do. If they do make a selection here, this one makes sense. Linderbaum is a bonafide beast who can seal a defender off like Momma’s best Tupperware. Easily the best center in the draft, it won’t surprise me at all when Tyler becomes a perennial pro bowler.

Kyler Murray has enough weapons for now, he doesn’t get any new toys until he shows he can take care of the ones he already has. If it wasn’t Jordan Davis wrecking the play on Georgia’s D-line, it was Devonte Wyatt. At age 33, J.J. Watt can’t supply all the pressure by himself. With the addition of Wyatt, he won’t have to.

The Cowboys once had the best O-line in all of football, but those days seem to be coming to an end. Zion could stop the bleeding, by patching up a hole at the guard position. Ezekiel Elliott had the quietest 1,000+ yard season known to man, rushing for a measly 58.9 rushing yards per game. Johnson is a no-doubt starter right away in this league and should help pave the way for some renewed running success.

You can’t expect Josh Allen to play quarterback and running back. Who do you think he is, Lamar Jackson? In all seriousness, we know that Allen is fully capable with the ball in his hands and he looks good doing it. But at some point, you have got to go away from letting your franchise guy absorb all of these unnecessary hits. It feels like this team relies too heavily on their QB to do the dirty work. That’s where Hall comes in. He provides the much-needed thunder to Singletary’s lightning.

This man plays very nasty, very nasty indeed. He’s told reporters that he wants to bring a “Mob Mentality” to the offensive line of the team that selects him. This is a team that wants to run the ball. Tyler Smith is super aggressive at the point of attack and loves sitting defenders on their backside.

It took a while for another corner to come off the board, but Andrew Booth Jr. gets added to a secondary that already features Carlton Davis. Booth’s ball-hawking skills and hands are immaculate. He should force a ton of PBUs and turnovers.

The Packers double-dip and take another WR. George Pickens and Treylon Burks? Sounds like a revamped receiving corps to me. Aaron Rodgers is somewhere sipping a mojito, watching ESPN with a big ole smile on his face.

Tyrann Mathieu is no longer on the roster and the Chiefs have a huge void in this secondary. This pick could also be Georgia safety, Lewis Cine. But because Hill can play press-man, zone, and operate out of the safety spot, so he becomes the preferred pick here.

Dang, who let the Chiefs get Jahan Dotson. Don’t get me wrong, he’s definitely not slow, but at the same time, he doesn’t need to be the speedster replacement for Tyreek Hill. Mecole Hardman can attempt to play that role. Dotson on the other hand is a YAC machine. Andy Reid would surely enjoy scheming up ways to get Jahan into open space.

It would have been nice to see one of the top corners here, but seeing as there are none available, why not continue what you started this offseason and truly solidify this offensive line. Kenyon Green is a day one starter on this roster and the Bengals could breathe easy knowing that they’ve done everything they could to protect Joe Burrow.

Who is the most pro-ready QB in this draft? That’s the question Dan Campbell and the Lions will have to ask themselves come draft day. It seems to be a popular belief that the answer to that riddle is Kenny Pickett. Thankfully there’s a dome in Detroit, so his baby hands won’t be a factor during rainy days playing at home.