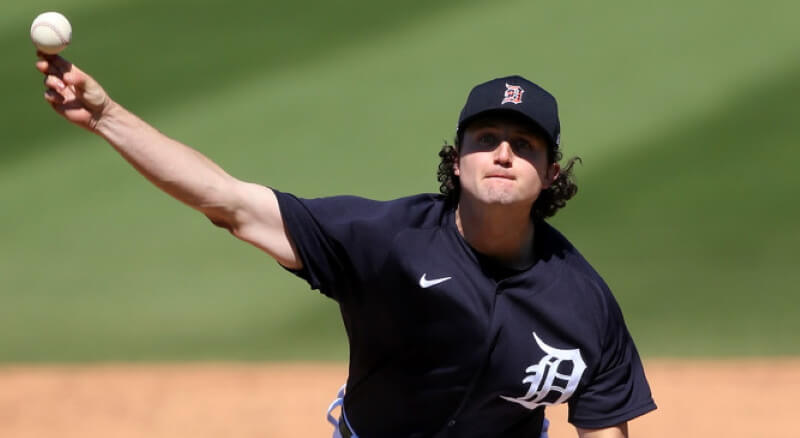 Last week, I discussed my FOMO for Adolis García and I revisited Nick Pivetta in my recent buy or sell article here. This week, I have a teeny bit of regret regarding Casey Mize as well. The Tigers seem to have something interesting going on with their pitchers adding or upping their slider usage. It’s happening with Mize, Tarik Skubal, and Spencer Turnbull so far in 2021. Not that it’s the only reason, but the results improved this season.

The Rays freed Willy Adames to the Brewers and he’s hitting much better with them over the past 16 games entering Wednesday. Meanwhile, we have Cleveland’s other Ramirez in Harold Ramirez, and he deserves highlighting in this week’s buy or sell. Let’s see where the data leads us as analyze Mize, Adames, and Ramirez.

So What Changed for Mize?

Outside a slight increase in four-seamer velocity (+0.7 mph), Case Mize added a slider and adjusted his pitch mix a bit. He’s using the new slider just over 25% of the time, as the second most used pitch although Mize uses four different pitches at least 15% of the time.

In an article on The Athletic by Cody Stavenhagen, Mize noted he wants to “throw any pitch in any count to anybody.” Stavenhagen also mentions something we notice in Mize’s plate discipline with an increased first-pitch strike rate up to 63.1% in 2021 compared to 55.6% in 2020. That means, he improved in getting ahead of the count to opposing hitters.

When looking at Mize’s new slider, it makes me wonder if it’s the 2020 cutter with some changes. Some small changes in the vertical and horizontal movement.

However, the main difference involves its overall effectiveness with a -4 Run-Value in 2021 according to Baseball Savant. That’s currently Mize’s best pitch in terms of Run-Value. Mize’s slider is performing well with a 12.7% swinging-strike rate and .207 wOBA allowed. That makes it an added weapon to his already diverse arsenal.

Interestingly, Mize’s splitter, a pitch he was known for, ranks fourth amongst its usage. We know sometimes splitters can be difficult to command for pitchers, but Prospects Live graded Mize as having plus command and above-average control. I like targeting pitchers with above-average command and control even if they don’t dominate with the strikeouts. The No. 1 overall pick back in 2018 looks like he’s finally putting it together in 2021.

In terms of vertical movement, Mize’s splitter dropped 2.4 inches more than the average splitter movement in 2021 down a bit from 5 inches compared to the average in 2020. Interestingly, Mize’s swinging-strike and whiff rates dropped on the splitter so far in 2021. It seems like Mize could use it for whiffs in the future, but not necessary at this time.

Should We Buy or Sell Casey Mize?

With Mize’s low .228 BABIP allowed and 83.6% LOB%, it’s likely the ratios increase a bit closer to a 4.00 ERA. In 2020, Mize seemed to experience some misfortunate give the 59.1% LOB%. However, the reasons for optimism include higher F-Strike%, added the effective slider, and allowing slightly less contact in the zone.

Update: On Wednesday, Casey Mize pitched against the Tigers with 99 pitches in six innings. Mize allowed four hits, three earned runs, and two walks with six strikeouts. He finished with a 39% whiff rate and 32% CSW% on his four-seamer yet a 27% whiff rate and 24% CSW% overall. Another solid outing for Mize although it comes against the Mariners. As noted earlier, I’m buying into Mize’s changes.

We also notice improved plate discipline across the board, which is a good sign. It’s odd right – less chasing, more zone/overall contact, and a much lower swinging-strike rate could lead to positive results. Although he’s not barreling up the ball as much, we love the improvements in the other four categories.

One of the areas we know about the Rays versus the Brewers home ballpark includes the varying park factors. Per EV Analytics, the Rays rank as the 4th worst in wOBA at 0.96 compared to a 1.00 wOBA for the Brewers home park. The same trends remain with the other Park Factor metrics. Although it’s not the main reason for Willy Adames’ success, it’s helpful as the Rays home park rates very pitcher-friendly.

Should We Buy or Sell Willy Adames?

On top of the improved park factors and fantasy production, Willy Adames boasts a career-best 13.3% barrel rate and 45% hard-hit rate. More so, I want to highlight the barrel rate although the .295 wOBA is terrible. However, I imagine that will continue to rise with more time in a Brewers uniform.

The improved plate discipline metrics noted earlier help us to buy back into Adames rather than selling. In deeper trading leagues, consider acquiring Adames via trade if you need some shortstop or middle infield help. On the surface, the metrics look unexciting, but it’s turning around for Adames since the trade to Milwaukee.

The Other Ramirez in Cleveland

Let’s bring up a hitter with deep-league (15-team plus) viability in Harold Ramirez. A week ago before Sunday FAAB, I put a conditional bid in for Ramirez but didn’t end up snagging him with higher priorities. However, he’s an intriguing hitter recently, particularly since he’s earning regular playing time with Franmil Reyes and Jordan Luplow injured.

The other Ramirez in Cleveland – Harold Ramirez makes a decent amount of contact with an 89.2% Z-Contact% and 79.7% Contact%. Ramirez uses an aggressive approach with a high 56.3% Swing% and 40.4% O-Swing%, both of which are about 10% higher than the league average. Those plate discipline metrics translate to his low 11.5% strikeout rate and 3.8% walk rate.

When we find hitters that hit a ton of ground balls, we need them to crush fly balls and line drives, assuming that’s a part of their profile. Amongst qualified hitters with 50 batted ball events, Ramirez has a 98.1 mph exit velocity on FB/LD (No. 17) near Matt Olson, Joc Pederson, and Tyler O’Neill. That’s pretty damn good company in terms of power hitters.

Should We Buy or Sell Harold Ramirez?

In 15-team leagues, Harold Ramirez looks a bit more viable and buyable than I initially expected. Outside of deep leagues, Ramirez isn’t fantasy-relevant in shallower formats but could push relevance in 12-team leagues depending on team needs. However, the solid contact rates with the decent hard-hit metrics, make us intrigued as a deep-league 5th outfielder or bench bat.

As a journeyman in the minors from 2012-2019 with three different MLB teams, it’s easy to overlook the other Ramirez in Cleveland. One of the reasons I wanted to highlight Ramirez involved the point of highlighting the intriguing deep-league hitter. That said, I’m not actively buying or selling Ramirez, but adding and churning as needed though the exit velocity on FB/LD is something to monitor.