Dynasty Dugout: Breakout Prospects About to Join the Elite (Hitters) 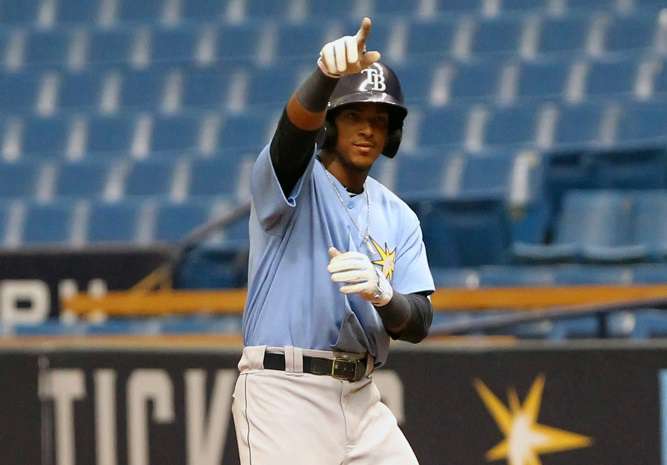 Just wait until next year. These are five words that fly carelessly from the mouths of people whose MLB team or fantasy team just had their season end without a championship to its name. Because next year, anything can happen. Next year, we could have a World Series between the Miami Marlins and the Tampa Bay Rays or crown Tim Tebow as the National League’s most valuable player. And yes, none of those were said with a straight face. The point is, next year is full of exciting possibilities and the element of the unknown, especially when it comes to dynasty leagues and potential breakout prospects.

The names below aren’t going to be unknown prospects. That’s not the point of this article. No, these are good prospects with the chance to become elite over the next 12 months or so. We’ve had plenty of prospects make this good to great leap in 2018, headlined by the likes of Alex Kirilloff, Peter Alonso, Jo Adell, and Carter Kieboom (who I’ll be scouting live tonight. Keep an eye out for the report in the coming days). All of these guys, and several more, went from being good to being everyone’s prospect crushes, including my own.

If you had any of these breakout prospects prior to this season, you’re probably pretty damn happy with yourself right now, aren’t you? I mean, why wouldn’t you be? You grabbed a stud before he was a stud. That’s the best kind of stud if I do say so myself. With all my mid-season rankings in the books, I decided to pinpoint certain players that have the potential to become the next batch of studs by this time next season. Only one of these guys made my top-100 (barely), with the rest on the outside looking in…. for now.

Yeah, we know you love Eric’s prospect stuff, but it’s time to multi-task! Keep up with all of our baseball coverage, but kick off your football prep and dig into our 2018 Fantasy Football Draft Kit. Then head on over to Fantrax and join a Fantasy Football league.

Since I’ve already discussed the recent MLB draft class ad nauseam over the last month, I won’t include any here. BUT, and you knew there was a but coming, I do think several of them will become elite prospects within the next 12 months. They are:

What were you doing when you were 17 years old? I’m sure you were cool and all, but did you have a cycle, a two home run game, and a 24-game hitting streak under your belt during your first 28 professional games? I didn’t think so. Think about that last sentence for a second. Franco has played just 28 games and already has a 24-game hitting streak. That’s pretty darn impressive.

He might not be a physical specimen at the plate, but Franco is pound for pound one of the best hitters in the minors. A switch-hitter, Franco makes consistently hard contact from both sides of the plate with other-worldly plate coverage. He’s only struck out eight times in 127 plate appearance for a microscopic 6.3 K%. A big reason for that is Franco’s lighting quick wrists. Good luck trying to sneak a heater by him with those wrists.

While his swing isn’t currently geared for a ton of power, Franco’s consistent hard contact will push a few balls over the fence and send countless balls deep into the gap. And remember, he’s only 17. There’s plenty of time to add loft and power to his swing as he matures both physically and as a hitter.

With all this ranting and raving about his abilities at the plate, Franco’s plus speed gets overlooked. His combination of speed and contact will almost surely land him atop the Rays lineup down the road, with the ability to produce above-average power numbers for a top of the order hitter, ala Mookie Betts. Calm down, I’m not comparing him to Mookie. But Franco does have the kind of skill set to be an across the board statistical dynamo that can fit in anywhere from leadoff to clean up. Get on board now before it’s too late.

ICYMI, I got eyes on uber prospect Wander Franco on Sat and he could be special. Without a doubt the 2nd best player I've seen this season behind Juan Soto. And left handed I actually see a lot of similarities between the two. + Hit, + power potential and maybe ++ on both. pic.twitter.com/yEEAnD9bvY

Uh oh, the speedster is developing some power. Don’t you love when that happens? Coming into the 2018 season, Pache had a whopping total of zero home runs in 689 at-bats. He did have 17 doubles and 15 triples during that time, but a big ol’ goose egg in the home run column. Even though he hadn’t hit a home run yet, there was some power potential in Pache’s bat, just waiting to be tapped into. That has happened this season.

This is the Cristian Pache 2B that hit above the 390 in LCF. Easy power when he stays back and lets his hips do the work#Braves #Top100 pic.twitter.com/wJpVS6836u

Through 356 at-bats, Pache already has 18 doubles, five triples, and eight home runs. The biggest difference from last year to this year from a power perspective has been added loft to his swing and staying back on pitches. During his first taste of minor league ball, Pache had a tendency to jump at pitches and slap them into the outfield. Now, this approach is fine for batting average, but getting out on your front foot greatly limits power potential.

While the power has improved, the stolen bases have dropped drastically from 32 to just seven so far this season. Is that odd? Absolutely. But at the same time, it’s nothing to be overly worried about yet. Like the two players above him, Pache is still a teenager and has plus-plus wheels. Long-term, if the power continues to develop, we could be looking at a .300/20/40 type of player. To reach that lofty level, Pache will need to continue to refine his approach at the plate, stay back on pitches, and get smarter on the bases reading pitchers moves. All the raw tools are there to make him one of next season’s breakout prospects.

It’s hard to see a 6’6 shortstop and not get at least a little excited. He could be the worst hitter in the world, but because of his height, excitement follows suit. Cruz was the lone guy here to crack my Top-100 and his offensive upside is to thank for that. Still just a teenager, Cruz is putting his vast array of tools on full display in the Sally and making the Dodgers regret trading him to acquire Tony Watson last season.

When watching Cruz hit, the first thing you notice is his impressive raw power from the left side of the plate. It’s not just due to his size either as Cruz generates good loft with his swing, especially to his pull side. While his swing can get a tad long at times leading to too many strikeouts, Cruz makes up for it with his plus bat speed. That bat speed can only go so far though, as his .237 batting average last season indicates. But hey, he was an 18-year-old experiencing A-ball for the first time, so you can’t be too harsh on that average. This season, Cruz is up to .289 with 11 home runs and 10 steals in 339 at-bats.

To get to that upper echelon of breakout prospects, that hit tool and plate approach are what Cruz will have to improve on. He has the power and speed upside to put up 30/20 seasons, but those will look a lot better with a .280+ average than the .260ish that Cruz currently projects at. His size could also force him over to third too as he fills out more. Regardless if he moves to the hot corner or stays at shortstop, Cruz has the tools to become a fantasy star.

For more from Eric, check out his archive and follow him on Twitter @EricCross04. Also, make sure to check out Eric’s waiver wire recommendations every Friday, here on FantraxHQ.