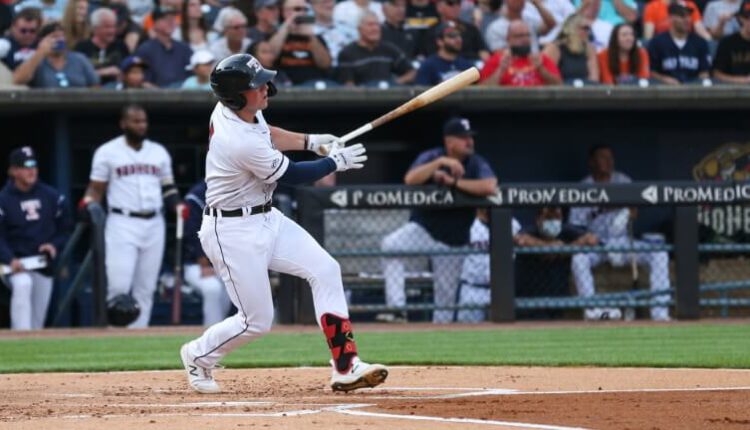 The Arizona Fall League is considered by many the finishing school for prospects. For most, it is the final stop for prospects before taking the step the Major League the following year. I was fortunate to spend three days in Arizona last week at the First Pitch Conference. The conference revolves around the Arizona Fall League. Eric Cross and I attended seven games over our time there, getting plenty of live looks at some excellent prospects. We even checked out a Royals and Rangers instructs game, looking at recent draft picks and international signings. It was a great experience seeing so many players live and some teams as many as three times. What prospects stood out the most that you should target in your dynasty leagues? Let’s take a look.

Spencer Torkelson has had an excellent Arizona Fall League, but in reality, it is what we expected out of him. He makes elite contact, controls the zone well, recognizes pitches, and mashes baseballs. Torkelson is slashing .474/.615/.579 through 26 plate appearances. He is working on hitting the balls to all fields and doing it well. Torkelson has six batted balls in Salt River Stadium (the only field with Statcast integration) and has an average exit velocity of 103 mph. Yes, an average! He is maxing out at 109 mph right now. Torkelson is an easy top 5 prospect.

Triston Casas has not performed at Spencer Torkelson levels but has looked good, nonetheless. He is slashing .300/.391/.500 with a home run in 23 plate appearances. Casas has a very similar approach to Torkelson, but his hit tool is not quite as polished. He has done all the right things in the Arizona Fall League and looks to continue to rebound after a slow start to 2021.

Triston Casas lines a 2-2 pitch into right for a single.#DirtyWater pic.twitter.com/W5RaVOk312

Gonzales has not flashed home run power in the fall league, but he is seeing and hitting the ball well.  In one game, Gonzales hit a ball off the wall to the opposite field with the wind blowing in. In the video below, Gonzales hits a ground-rule double.  He has shown good speed as well. Gonzales is locked in as a top-25 prospect.

Another day, another Nick Gonzales extra base hit. This time to the deepest part of the park! Easily would have been a triple but settles for a ground rule double. #LetsGoBucs pic.twitter.com/6xPpBJIlpI

If there is any prospect I grew more fond of last week, it is Richie Palacios. He may be 24 years old, but Palacios hadn’t played professionally since 2018. He missed all of 2019 with a torn labrum, and there was no Minor League season in 2020. The former Towson University standout can play either middle infield position or in the outfield.

Palacios exhibits a plus hit tool and makes consistent contact. He only hit seven home runs in 2021 between double and triple-A, but I could see Palacios reaching 15 home runs at the Major League level. He is a plus runner who is highly effective on the base paths (20 of 23 in 2021). Palacios is also a patient hitter who is comfortable taking walks, therefore posting high OBPs. He exhibited all of this in the Arizona Fall League. Palacios will be a massive riser in my next prospect ranking update.

Richie Palacios really caught my eye in live looks in the AFL. I was very worried after he was hbp on the hand, but he rebounded strong and had a great couple games. 1.271 OPS and 3 extra base hits in 14 PAs. Going to be a riser in my prospect rankings.
Heres some highlights ⬇️ pic.twitter.com/x2SkBKtrUN

Frank Mozzicato will be the popular Royals’ pitcher in FYPDs, but I would lean Ben Kudrna. Both high school arms, Kudrna impressed me more than Mozzicato in a look at instructs. Kudrna’s fastball sat 95-97 and topped at 98, while Mozzicato sat 89-91. Kudrna exhibited a nice slider that sat in the upper 80s and a changeup that has flashed of being a solid pitch. He got hit around a little bit, but Kudrna impressed me. So here is my suggestion. Don’t pay the high price for Mozzicato in FYPDs, instead take Kudrna late.

Ben Kudrna got hit around some, but he showed an impressive arsenal. Fastball sat 95-97. Slider had good bite & velo. He threw a couple changeups which could lead to a good 3 pitch mix. Will need to command pitches better, but Kudrna opened my eyes 👀#TogetherRoyal pic.twitter.com/MQG0KVpu7K

Joey Wiemer is a beast on and off the field. He has so much swagger and plays the game extremely confidently. No one saw the breakout coming this year after being a fourth-round selection in 2020, but Wiemer put in the work, and it has paid off. His approach and swing are what I would describe as unconventional, but it works.

Wiemer hits the baseball extremely hard, has plus speed, and has a cannon for an arm. His hit tool has improved as well. He featured a big leg kick in his swing at Cincinnati but has adjusted to more of a toe tap. It paid off as Wiemer slashed .295/.403/.556 with 27 home runs and 30 stolen bases in his first season of professional baseball. The Arizona Fall League has shown it was not a flukey season either. Wiemer has mashed baseballs and is the only player to post multiple exit velocities over 110 mph in Salt River Stadium (the only park with statcast implementation). His max exit velocity of 113.2 is quite impressive. Wiemer is a stud, and I’m 100 percent buying in, and you should too.

It has been a crazy professional career for Owen White, who was drafted 55th overall in the 2018 draft by the Texas Rangers. He did not pitch professionally in 2018 after the draft and then had Tommy John surgery before the 2019 season. There was no 2020 Minor League season, so White made his professional debut this year but only pitched 35 innings due to a fractured hand. Wow, what a whirlwind. White was dominant in those 35 innings, though, striking out 56 and posting a 3.06 ERA.

The hype has not caught on with White, who pitched five scoreless innings in a game we watched live in Arizona. White has three solid pitches, with his curveball being his best pitch. He features solid command as well. White is an excellent target in dynasty leagues as many have not caught on to the talent yet.

This year, Kyle Stowers was a quiet breakout with 27 home runs and eight stolen bases between three levels (A+, AA, AAA). He slashed .278./383/.514 between the three levels. He hasn’t put up overly impressive stats in the fall league, but watching him, you can tell Stowers is an athlete. Stowers has a very muscular frame and generates effortless power. He has a good approach at the plate. I don’t think the hype has caught up to Stowers yet, making him an easy buy in dynasty leagues.

Be sure to check out the latest Fantrax Toolshed episode where Eric Cross and I discuss over 30 players from our live looks at the Arizona Fall League.