Deep-Diving Dolphins: Why Albert Wilson is a Late-Round Value 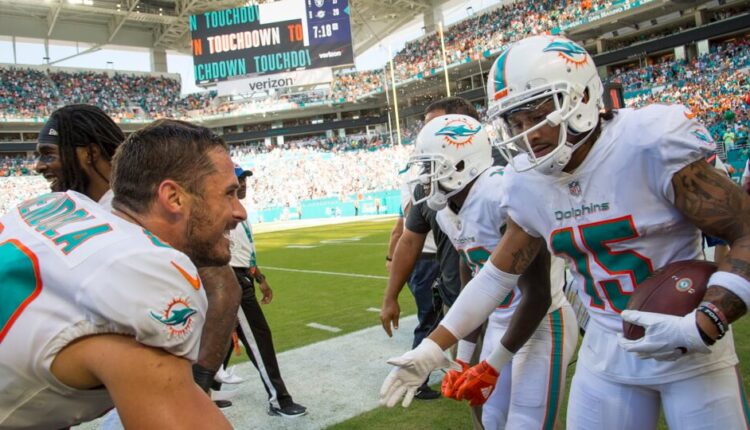 There is not a whole lot of optimism in the fantasy community when it comes to the Miami Dolphins. Truth be told, there are plenty of perfectly logical reasons to avoid the Dolphins for fantasy purposes. Miami ranked 31st in total offense, 30th in passing offense, and 30th in point differential a season ago. The Dolphins failed to produce even a 2,000-yard passer, 800-yard rusher, or 600-yard receiver in 2018. That type of futility is rarely seen in today’s era of offensive explosions. The only Dolphin that fantasy owners are investing a top-150 draft pick in is running back Kenyan Drake. However, there is one player who I am confident will provide excellent value this season. That player is wide receiver Albert Wilson.

Albert Wilson came to Miami last season following four seasons in Kansas City. He started the year on fire and was a top-30 fantasy wideout through Week 7. Unfortunately, that is when his potential breakout season came to an abrupt end. Wilson suffered a hip injury that sidelined him for the remainder of 2018. The injury did not require surgery, and the former Georgia State Panther has been brought along slowly in preparation for the 2019 season. Miami has limited Wilson to individual drills thus far in training camp, but all reports seem to paint a positive picture. If Wilson is indeed ready for action by Week 1, he is primed to produce at a fairly high level for the Dolphins.

Wilson’s status as a high-end WR3 through seven weeks of the 2018 season seems fluky. But there is evidence to suggest it was not as inconceivable as it sounds. Wilson is an outstanding slot receiver who can get open and generate yards after the catch. Defenders assigned to Wilson afforded him just 3.63 yards of separation at the snap last season. That ranked 90th among all receivers. Yet Albert Wilson finished seventh in target separation, which measures the distance between the receiver and closest defender at the time of the pass arrival. Among 150 wide receivers who have seen at least 150 targets over the last five years, Wilson ranks first in yards after the catch (YAC) and in missed tackles forced per reception. His ability to create separation and make defenders miss will be needed on a Miami team which lacks playmakers.

Miami ran the fewest offensive plays from scrimmage in 2018, which I, as a Jets fan, will blame on the team having Ryan Tannehill and Brock Osweiler as their quarterbacks, and not on Adam Gase. Whatever the reason, any increase in Miami’s offensive pace should benefit their skill players. Despite Miami’s failure to produce in the passing game a year ago, the team did virtually nothing to enhance its receiving corps heading into the 2019 campaign. DeVante Parker and Kenny Stills return to form an uninspiring pair of outside receivers, while the team’s leading receiver from last season, Danny Amendola, is now in Detroit. Through six games last season, Amendola outpaced Wilson 290-217 in total snaps. The absence of Amendola should leave Wilson as the club’s primary slot receiver in most offensive sets.

Wilson’s positioning in the slot is important on a couple of fronts. Per Pro Football Focus, Wilson ranks sixth among 94 qualified wide receivers in yards per route run from the slot since 2017. You may have heard of the five receivers in front of Wilson. They are Michael Thomas, A.J. Green, Tyreek Hill, Antonio Brown, and Davante Adams. All but Green, currently out 6-8 weeks, are being drafted within the first two rounds of most drafts. I am not suggesting Albert Wilson belongs quite in that class, but he has high-end skills. If Ryan Fitzpatrick beats out Josh Rosen for the Dolphins’ starting quarterback job, Wilson should benefit even further. Fitzpatrick is known as a gunslinger, but he has targeted slot receivers on 26.4 percent of his attempts since 2009. That is the highest rate among all 65 quarterbacks with at least 600 pass attempts over the last decade.

Wilson’s 2.14 PPR points per fantasy target over the past two seasons ranks fifth among all wide receivers. If Wilson simply maintains his five targets per game from last season, that would put him at a full-season pace of 171.2 fantasy points. That number would have slotted him as last season’s WR34 in PPR leagues. He is going 81st among wide receivers in drafts.

I understand the skepticism. Wilson has a balky hip and is playing on a bad offense with an unsettled quarterback situation. However, at this point in a draft, there is plenty of upside and virtually no downside. Albert Wilson has a combination of skills and opportunity that is hard to find once you approach pick number 200. I believe he will be an outstanding value this season and is an ideal Best Ball option late in drafts. Even if he does not hit his WR3 ceiling in season-long leagues, Wilson will have plenty of weeks where he offers that type of production.

Are you buying into Albert Wilson as a late-round value? Head on over to the 2019 Fantrax Fantasy Football Draft Kit for more great strategy, analysis, and rankings.