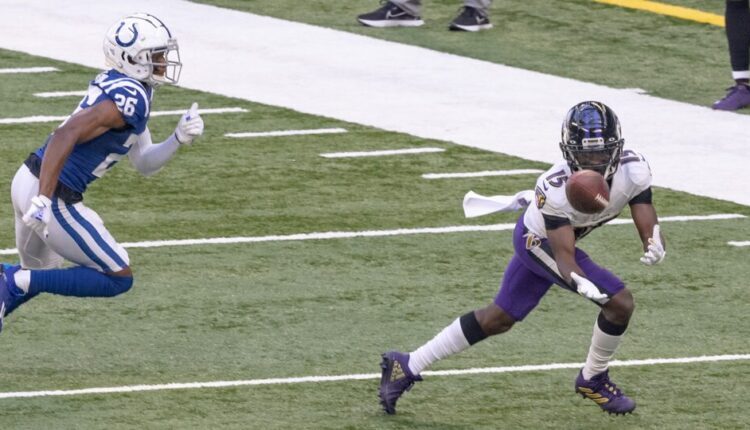 Since entering the league in 2019, Marquise Brown has been inconsistent thus far in his career. As a rookie, he started just 11 games and was the PPR WR49 in points per game (PPG). In 2020, Brown didn’t fare much better, finishing the season as the PPR WR37 and the WR49 in PPG. Last season was a different story, as Brown finally broke out and was the PPR WR17 on the year and the WR20 in PPG.

As of this writing, Brown has an expert consensus ranking (ECR) of 55th overall as the WR23 on FantasyPros, but I have him ranked at 32nd overall as the WR15 in my top-200 redraft PPR rankings (you can find them here). Let’s dive into why I’m significantly higher than the consensus on Marquise Brown and how he has league-winning fantasy upside in 2022.

Many fantasy players consider Marquise Brown to be a pure deep threat, but that couldn’t be further from the truth. Yes, he ran a 4.32 40-yard dash at his pro day and can score a long touchdown anytime he touches the ball, but Brown is also an agile route runner dating back to college. In fact, Brown has charted well in Matt Harmon’s Reception Perception tool in all areas of the field over the last couple of seasons. He’s consistently won on corner, nine, and post routes, but Brown has also scored highly on flats, slants, and screens.

So why hasn’t he shown more thus far in his career? As a rookie in 2019, Brown entered the year still recovering from a foot injury and missed valuable practice time during OTAs and the preseason. As a result, he averaged just a 58 percent snap share and didn’t fully capitalize on Lamar Jackson‘s MVP season even though he led all Ravens wide receivers in targets, receptions, and receiving yards. In 2020, Brown led the team in targets, receptions, receiving yards, and receiving touchdowns, but low overall target volume in a run-heavy offense limited his fantasy production.

Last year, Brown finally saw more target volume with Baltimore forced to pass more due to a depleted defense and run game due to injuries, which led to a career-highs in receptions, receiving yards, and fantasy points. At a glance, Brown’s 2021 finish as the PPR WR17 and WR20 in PPG was impressive. However, he suffered a thigh injury in Week 10, and Jackson missed multiple games over the second half of the season. Through the first 10 games of 2021, Brown ranked 10th among wide receivers per PFF, and he was the WR6 and WR10 in PPG over that span in PPR scoring. That’s the kind of ceiling he has in 2022.

Can Brown see similar targets and fantasy production this coming season with his new team? During the 2022 NFL Draft in April, Baltimore announced a stunning trade, sending Brown and the 100th pick to Arizona in exchange for the 23rd pick. It was revealed afterwards that Brown had requested a trade following the 2021 season, citing concerns with a lack of fit in the Ravens’ “system” and not being in a “situation where he could thrive”.

Brown wasn’t wrong, as Baltimore is hardly the place for a wide receiver to produce lofty receiving numbers in an offensive scheme led by Greg Roman that features the run game. Since Arizona hired Kliff Kingsbury and drafted Kyler Murray in 2019, the Cardinals have consistently outpaced the Ravens in both pass attempts as well as in offensive plays as a whole. Even with Baltimore’s spike in pass rate in 2021, they barely passed at a higher rate than Arizona did.

Over the last three years, the Cardinals have averaged nearly 18 percent more pass attempts per season, which bodes well for Brown. Some in the fantasy community have voiced concern about Brown’s target share now playing in a talented wide receiver corps alongside DeAndre Hopkins, Rondale Moore, and a declining A.J. Green. However, even if Brown’s target share were to decrease from his 27 percent share in Baltimore last season, Brown could still maintain or even exceed his 2021 target total due to more overall target volume in Arizona.

Now that we’ve established that Brown can see high target volume in Arizona, what about his efficiency? Many wide receivers struggle in their first season with a new team catching passes from a new quarterback. As with Davante Adams reuniting with Derek Carr in 2022, there shouldn’t be too much concern for Brown reuniting with his college quarterback in Murray, as he logged over 1,300 receiving yards and 10 touchdowns in his final college season with Murray at Oklahoma in 2018.

The pair should have little trouble re-establishing their rapport this offseason, and their history together should mostly alleviate any concerns about Brown’s immediate integration into the Cardinals’ offense even though it’ll be his first year in Kingsbury’s offensive scheme. On top of that, Murray has excelled at the deep ball since entering the league, which matches up with one of Brown’s biggest strengths.

As good as Brown’s 2021 season was, it actually could’ve been even better, as he ranked sixth in unrealized air yards last year due to off-target throws, in part due to Tyler Huntley and Josh Johnson having started five games filling in for the injured Jackson. Even so, Murray has consistently been more accurate on passes of over 20 yards than Jackson over the last three seasons, and Murray led all quarterbacks last year in deep ball completion rate. The trade for Brown this offseason is a match made in heaven.

Some have scoffed at Brown’s current ECR as the WR23, but that might actually be his fantasy floor, not his ceiling. If Brown stays healthy in a more fast-paced Cardinals offense that passes the ball more with a quarterback that’s even better at throwing the deep ball, the sky is literally the limit. His fantasy production in 2022 could look more like the first half of his 2021 season, where he was the PPR WR6 and the WR10 in PPG. Brown has the potential to be a top-10 or perhaps even a top-5 fantasy wide receiver this coming season, and with Hopkins’s suspension, Brown could be a league-winner as the top-scoring player in all of fantasy football over the first six games of 2022.

Got a hot take on Marquise Brown? Share it in the comments below and then head on over and check out our 2022 Fantasy Football Draft Kit!