Diving into the player pool is essential in the initial stages of your Fantasy Baseball prep for the coming season. Knowing and understanding the player pool can help you formulate a better draft strategy. It may seem like common sense, but knowing the deep and shallow positions can take you a long way. Today, we will look at the Fantasy Baseball shortstop position, examine the player pool, and draft strategy for the position. This article continues a positional primer series that will take an in-depth look at each position across the diamond.

How should you approach shortstops in 2022 drafts? A look back at 2021 performances? Shortstop tiered rankings? I have it all covered for you right here!

Positional Primers: Catcher, First Base, Second Base, Third Base

I have already mentioned it, but 2021 was a massive year for shortstops. Four of the top seven players on the Razzball Player Rater. Fifteen of the top-100 overall players were shortstops. Move that number up to the top-125 players, and there are 21 shortstops.

Seven shortstops stole 20 or more bases, with Trea Turner leading the way with 32. Tatis posted a combined 67 home runs plus stolen bases. Semien and Turner both hit 60 combined. There are many threats to steal bases at the position while also providing a stable power output.

Using NFBC Draft Champions ADP, there is a clear tier at the top, with Trea Turner, Fernando Tatis Jr., and Bo Bichette all having an ADP higher than five. These players provide power, speed, and a solid batting average floor. There is a good reason they are top five picks, and I would be more than happy to start my draft with any of Turner, Tatis, or Bichette.

After the top three, there is a nice tier drop off with Marcus Semien being the next shortstop off the board at an average pick of 30.67. I think it’s a bit high of a price for Semien, who is coming off a career-best season. Nearly every one of Semien’s home runs was a perfectly pulled fly ball. You can see his 2021 home runs below overlayed in Globe Life Field. I still value Semien as a top-50 player, but I am not paying his current draft cost. 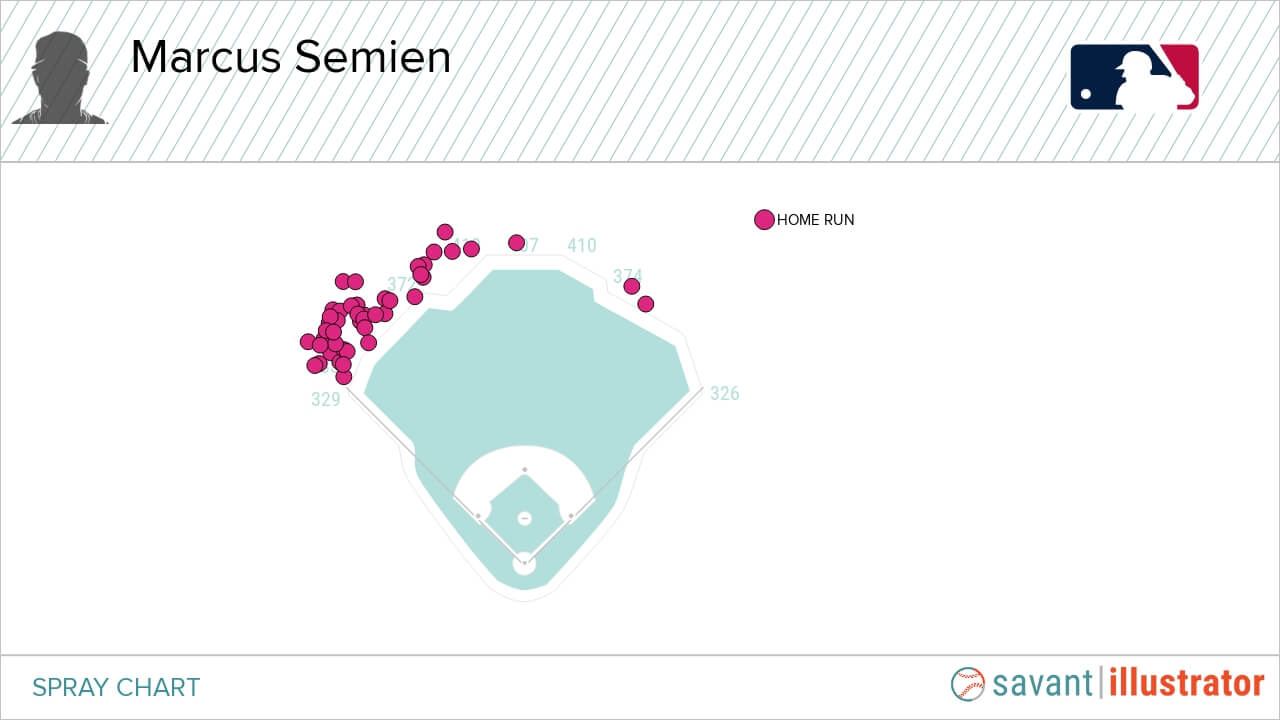 Tim Anderson(38.7), Trevor Story(40.3), Xander Bogaerts(43.7), Francisco Lindor(50.8), and Wander Franco(52.6) all round out the next group of shortstops going off the board. Based on projections, all fair prices. Tim Anderson appears to be a pretty good deal. He will hit for a high average and is a good 20 home runs/20 stolen base threat.

After Franco, we get to more divisive players like Javier Baez(67.5), Jazz Chisholm(73), Corey Seager(77.9), Jorge Polanco(89.7), and Bobby Witt Jr.(90.3). Baez and Chisholm are sexy power/speed threats but have colossal swing and miss risks. The batting average floor is low with both, so you need to be sure you have batting average help elsewhere if you plan to draft either. Seager has always been a polarizing player, primarily due to injury history, and now his move to Texas puts him in a worse lineup and home ballpark. Overall, his value seems fair, though. Polanco can return value even if he does regress from last season. Finally, Bobby Witt Jr. has projections off the charts. If he hits his projections, he is a great value here, but I have concerns about his adjustment period to the MLB.

Carlos Correa comes in as the 15th shortstop off the board, going at pick 100. Correa’s future home is still to be determined. His new team could have a significant impact on his value. He is followed in ADP by Jake Cronenworth(124), Dansby Swanson(126.4), Willy Adames(140.4), Chris Taylor(153.8), and Gleyber Torres(157.8). Projections love Torres this year which is interesting considering his two down years in a row. Steamer has him projected for 23 home runs, 14 stolen bases, and a .269 batting average. It seems like Steamer is putting a lot of weight on Torres’s 14 stolen bases last season. He only attempted 16 total stolen bases between 2018 and 2020. Torres’s power was also a massive outlier in 2019 as he dominated the Orioles in Camden Yards.

Swanson and Adames could both return positive value here, as well as Chris Taylor, who is back with the Dodgers and looks to be playing every day. There is a big cliff at shortstop after Torres. Amed Rosario and Brendan Rodgers are interesting at 164 and 166, respectively. After that, you find a lot of players with a ton of risk. So yes, shortstop is deep at the top, but don’t wait too long, or you will regret your decision.