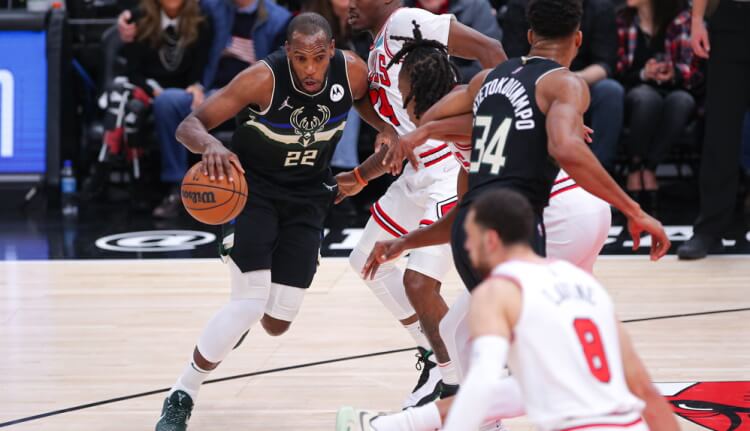 Drafting someone that nobody else saw having a great season is one of the most rewarding parts of playing fantasy sports. It really gives your ego a boost and sets your inner GM free. Shooting Guard tends to be a very versatile position in fantasy basketball, because so many of these players have multiple position eligibility. Let’s take a look at some potential shooting guard sleepers that you aren’t seeing in your other research.

The NBA moves so quickly that it becomes easy to forget about guys like Khris Middleton. You know…3x All-Stars. Former NBA Champions. Those kinds of guys. He played and started 66 games last year before getting hurt and being shut down for the year. He was averaging 20/5/5 with 1.5 stocks, and a 27% usage rate alongside Giannis. If you ask me, a healthy Middleton might’ve been enough to get the Bucks to repeat as champions. But we’ll never know. Regardless, he’s SG25 on my Big Board, and there’s no reason that he can’t step right back into his role next year. It’s hard to call an All-Star a sleeper, but injuries change the landscape. Keep Middleton on your radar if he falls to you.

Quick…name three players on the Utah Jazz, without mentioning Donovan Mitchell…I’m waiting…yeah, that’s what I thought. And that’s the primary reason why NAW is on my sleepers list. It seems in all likelihood that Mitchell will be traded sometime this season, anyway. (EDIT: MITCHELL HAS BEEN TRADED TO THE CAVS). When that happens, Jordan Clarkson becomes the only bonafide NBA scorer on this roster. Assuming that lands NAW a full-time starter role, let’s check out his Per 36 stats: 17 points, 6 boards, and 4 assists, with 2 stocks as the cherry on top. Expect a career year from the 5th year wing out of Virginia Tech.

The Hornets are looking like they’re going to be in the Victor Wembanyama sweepstakes this year. All signs point to Miles Bridges being out of the picture for the Hornets since he got into his legal trouble, so LaMelo Ball is the unquestioned leader and best player on the team, and then #2 is going to be a toss-up between Terry Rozier and Gordon Hayward. This team was 5th in the league in pace last year, and a high amount of possessions is great for fantasy because that means you don’t have to consider the high-usage players as much. You can look for 2nd and 3rd options for production because they are going to be in high-scoring games with little defense. Gordon Hayward averaged 16/5/4 on 13 shots last season, and with Bridges gone, I see no reason why he won’t be able to return to that 2017 form when he got 16 shots per game and averaged 22/5/4. He’s going to get the minutes, and the Hornets will depend on him for scoring. He’s under contract with Charlotte through 2024, so this season he may be auditioning to be the missing piece on a playoff team since he’s locked in for $30M this season and $31.5M next season. He’s going to be motivated and he’ll have all the opportunity to perform.