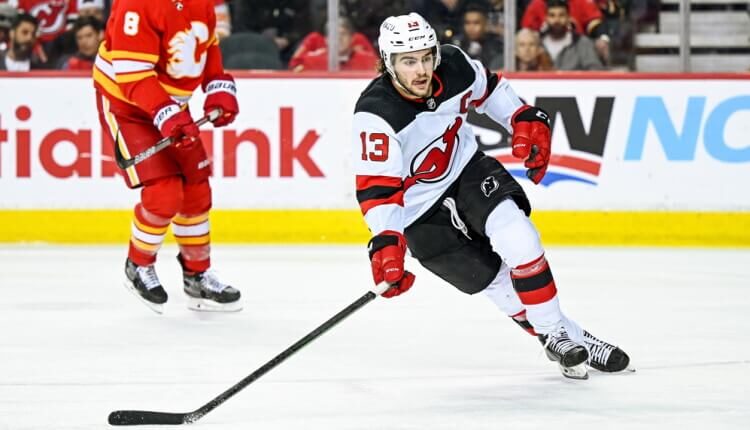 Why is finding fantasy hockey forwards sleepers important? If we ignore goalies for just a moment and look at the Top 10 fantasy hockey players on Yahoo at the end of last year, nine of them were forwards. (Hat tip to Roman Josi as the outlier defenseman.) It is THE position where you want depth to handle the ins and outs of an NHL season.

In a standard Fantrax league, your starting lineup will be 50% forwards, a ratio I try to keep in mind while drafting. With the total number of active players on a roster being 16, that means we want eight forwards at a minimum when we close the draft window. So should you just spend your first eight picks on forwards? Not so much (although every draft strategy can be viable if done correctly). Chances are quite high you’ll be looking for a few long past Pick No. 100.

One last stat before we get to our list of sleepers: Five of the Top 25 forwards on that same Yahoo list were drafted past Pick No. 100. There are several sleepers worth discussing, so let’s get to it.

The Devils should be stronger this season than last, and Hischier should continue to play center in a Top-6 role for 2022-2023. The 23-year-old ended up with 60 points and 156 shots on goal in 70 games. This year, he gets Jesper Bratt (73 pts), a healthier Dougie Hamilton, and a more-seasoned Jack Hughes to surround him, which should have Hischier flirting with 70 points. Drafting him in Round 13 or 14 is a no-brainer in terms of a forwards sleeper.

Capitals wingman Tom Wilson won’t return from his knee injury until December, which opens the door for Brown to skate on the top line alongside Alex Ovechkin and Evgeny Kuznetsov. If the 28-year-old former Ottawa Senator takes the puck and skates with it well enough, he could lock himself into a Top-6 role, boosting his fantasy value well beyond a 15th-round pick. Even if Wilson reclaims his position, Brown’s two months of boost in points is a worthwhile sleeper option in drafts.

In a 12-team draft with 16 players, Rakell’s ADP of 191 represents the second-to-last pick. There are a couple of reasons to add him to your roster, not the least of which is that he should begin the season on the top line with Sidney Crosby, Jake Guentzel, and Kris Letang. The first reason is that the Penguins signed Rakell to a six-year deal in the offseason, cementing their commitment to him which means increased forthcoming opportunities. The second is that he was on a 56-point pace following his trade to Pittsburgh at the deadline last season. Rakell should play plenty on a good team and show you a good return on investment in this forwards sleeper.

Jenner is the true definition of a forwards sleeper because his season could go in various directions. The acquisition of Johnny Gaudreau makes Jenner a sort of “Schrödinger’s forward,” if you will. He could see decreased playing time as a result of Gaudreau’s presence, which would be a shame considering the injury-shortened, 60-point pace he was on in 2021-2022. Or, more likely, he could slot right in as the center dishing assists to Gaudreau and fellow playmaker Patrik Laine. If it is the latter, he will be a steal at No. 205.

On the other end of the Gaudreau signing skates Coleman. The 30-year-old is slated to man the second line with newly-acquired Nazem Kadri, Andrew Mangiapane, and MacKenzie Weegar. Throughout his career, Coleman has never gotten an extended look on the ice, and his 7.5 shooting percentage is due for positive regression that could really benefit a fantasy hockey team if everything breaks right.

DeBrusk is only 25 years old, and it was well known that he did not get along with former Bruins head coach Bruce Cassidy. With Brad Marchand out until December (and also reaching his mid-30s), it seems that DeBrusk will be the one to absorb his minutes on the top line. Additionally, the Bruins are in a position to see what the youngster can do after handing him a two-year contract in March.

For Those in Deeper Leagues…

I am in a 14-team, 30-player dynasty league that just did our initial auction draft (for approximately the past month). So let’s say you’re in one of those and need some help. Here are some suggestions with ADPs of 250 and beyond.

There is an opening in the Oilers’ Top-6 heading into the season, and Yamamoto is most likely to take on the role. Last year, at age 23, he accumulated 41 points with just over 16 minutes of ice time. If you can get the guy slated to skate alongside Leon Draisaitl at No. 255, that is the definition of a forwards sleeper.

Compher will probably man the third line but still have a spot on the second power-play line, giving him some 35+ point upside. The Avalanche is one of those teams you want to throw darts at late in drafts because players on good teams will theoretically have more opportunity and success. Compher will be the first in line for increased everything should an injury befall one of the top guys. At No. 330, why not?

Tolvanen is the type of forward sleeper who likes to nap with ear plugs in, and it is virtually impossible to wake him up. But when he does wake up? The talent is there to greet the day with vigor and help make you feel like a genius for drafting him. If he proves otherwise, he can go lie down on waivers, and you’re out nothing other than a super late pick. Go for it.

Hayton and the Maybe-Not-As-Historically-Awful Arizona Coyotes have some young talent on the team and absolutely zero depth at forward, meaning this 22-year-old will get many opportunities to succeed or fail. If you’re going to throw a dart at a bad team, make him a Top-6 young skater with plenty of prime yet to come.

All of that said, who is on your list of sleepers? What trends are you seeing in your drafts? We love gaining insight and information from other fantasy hockey players, so let me know, either on the site or on Twitter at @thewonkypenguin. And, as always, good luck!