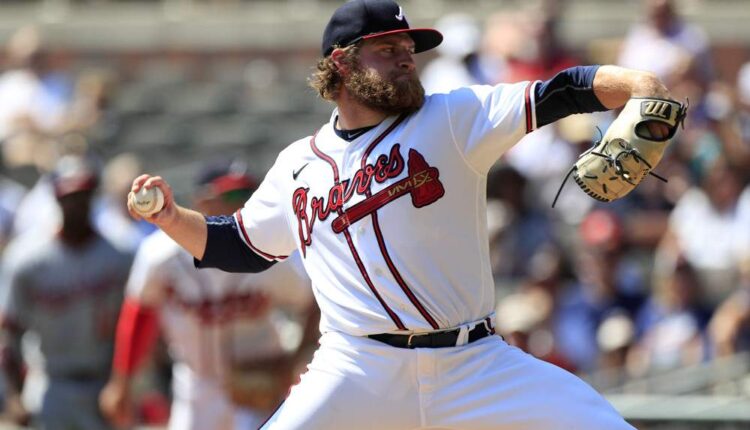 The season is ending, which makes us all sad, but if you play in a dynasty league, you know the grind never ends. Playing and winning in dynasty is a 365-day commitment. While many have checked out from the long season or moved to fantasy football, now is the time to grab some players that can help you win the following season. Today, I will break down five pitchers that are worth an add in dynasty leagues that can help give your team a boost in 2023. So what do you say? Let’s discuss the players.

No pitcher has been added more on Fantrax recently than Luis Ortiz. Ortiz is still only rostered in 26 percent of leagues despite being added in 16.1 percent over the last week. With plenty of analysts taking notice of what Ortiz is doing, it is no surprise. Despite only three Major League starts, Ortiz ranks first on Eno Sarris’s pitching plus model in stuff+. Get a subscription to the Athletic and check it out.

Luis Ortiz comps very closely to Hunter Greene in terms of pitch mix and velo. Ortiz's stuff is elite. According to @enosarris pitching+ model, Ortiz has the highest stuff+ of any starter(I know, small sample). Command can be an issue, but he has been impressive in 3 MLB starts. pic.twitter.com/Mo40AW8Ckl

As I stated in the Tweet above, Ortiz’s arsenal is similar to Hunter Greene’s. He throws his four-seam fastball nearly 58 percent of the time while mixing in the slider at 37 percent. Ortiz is a two-pitch pitcher except for mixing in a changeup five percent of the time, exclusively to lefties.

Ortiz’s slider has a 52.1 percent whiff rate and a .105 batting average against. His four-seam, while a lower whiff rate, gets up to 100 mph while averaging 98.6 mph. His fastball gets a ton of arm side run. Check it out in the video above.

The reality is that Ortiz did not post great numbers in the minors. He was 22 years old last season and spent the entire season in Low-A, where he posted solid numbers. His stuff was always there; many did not take notice. Ortiz posted a 4.64 ERA in Double-A this season across 114.1 innings with a 4.45 FIP. So, is he legit? Yes, Ortiz is legit to an extent but he is not likely to keep posting the numbers he has now over a small sample.

Regardless, he is worth an add in dynasty leagues due to the hype and to see where it goes next year.

Johan Oviedo is Ortiz’s teammate who came to St. Louis in the Jose Quintana deal. Oviedo made only one start in St. Louis and 13 appearances out of the bullpen.

Since coming to Pittsburgh, Oviedo has made five starts in September, posting a 3.05 ERA. Two starts have come against the Mets, in which he has allowed seven earned runs in 5.2 innings. In his other three starts against Toronto, Cincinnati, and the Chicago Cubs, Oviedo has not allowed a run in 14 innings. In his latest start, he pitched seven scoreless innings and struck out seven batters with zero walks.

Walks can be an issue with Oviedo, so seeing him throw seven innings without allowing a walk was encouraging. Oviedo has a 25 percent strikeout rate and a 10.7 percent walk rate for the season.

Oviedo has also changed his pitch mix a bit since the trade to Pittsburgh, using his changeup and curveball more while cutting the use of his slider. In the process, Oviedo has also seen the velocity on all his pitches up a tick.

Oviedo is rostered in very few Fantrax leagues; add him in 14-team dynasty leagues or deeper.

Bryce Elder looks like he could be another success story with Atlanta’s pitching development and their strong 2020 class. Elder debuted with Atlanta during the season’s first week and had a bumpy April before being sent to Triple-A.

Elder had an up-and-down season in Triple-A, and his success from start to start depended mainly on his walks. Since August 14, Elder has made four starts in Atlanta, posting a 0.65 ERA with a 26.7 percent strikeout and 7.6 percent walk rate.

Elder has also changed his pitch mix, relying more heavily on his sinker. He has located it well and done a good job keeping batted balls on the ground, thus a low batting average against. The change in pitch mix has seemed to work well for him.

Atlanta has a crowded rotation at the moment, but with Ian Anderson’s fall, the possibility of Charlie Morton’s option not being picked, and other question marks, Elder could get a shot in Atlanta’s rotation in 2023. He is worth an add in dynasty leagues. 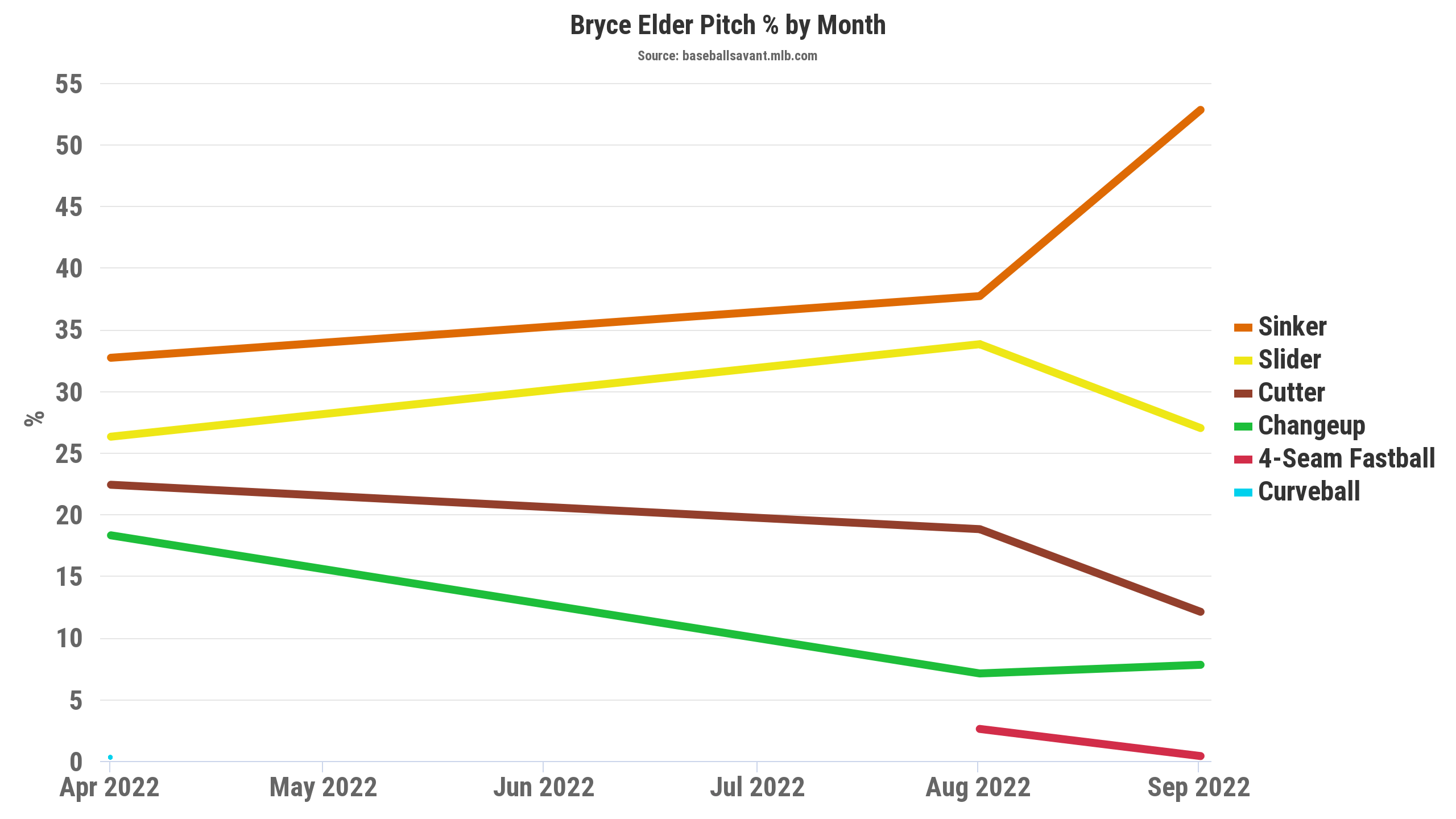 Outside of Tuesday’s implosion by Kyle Bradish, he has pitched exceptionally well the last two months. Since August 1, Bradish has a 3.52 ERA, including his seven-run outing in two innings against the Red Sox.

Bradish has a fairly low strikeout rate of 21.8 percent this year, but with his stuff, it is possible to see that number trend upward. Despite pitching in the AL East, which has proved tough for pitchers, Bradish has excelled down the stretch.

You likely have the question of what changed with Bradish. His first-half ERA was 7.38 in 46.1 innings, and he posted a 3.53 ERA in 66.1. The most significant change is Bradish using his four-seam less often. Bradish was using the four-seam over fifty percent of the time through July but dropped its usage to 47 percent in August, all the way to 31 percent in September. A significant reason for that drop is that Bradish added a sinker in September.

Bradish is using his curve and slider more often, which has seemed to make a difference in his performance. Can it stick into 2023? It looks like a realistic possibility that Bradish can be a viable option for fantasy purposes. I would take a shot on him in a dynasty just to see what he looks like next season.

If you have not jumped on the Hayden Wesneski bandwagon, it is time to do so. Wesneski is off to a solid start to his MLB career with a 2.33 ERA and a near 29 percent strikeout rate in 27 innings. He was excellent in 89.2 Triple-A innings with the Yankees before being traded to Chicago at the deadline. Wesneski struggled at first but showed his dominance since being promoted.

Wesneski’s arsenal is led by his slider, arguably his best pitch. He uses it 31.5 percent of the time, the most of any pitch. I love when pitchers use their best pitch most often. Wesneski also mixes in a four-seam, sinker, and cutter in his arsenal.

Wesneski has the potential to be a very solid arm in the Cubs rotation in 2023. If he is somehow available in your dynasty league, he is a must-add.

Thanks for stopping by to read about dynasty starting pitchers to buy and thanks for all of the support this year. Be sure to check out all our other great content at FantraxHQ.