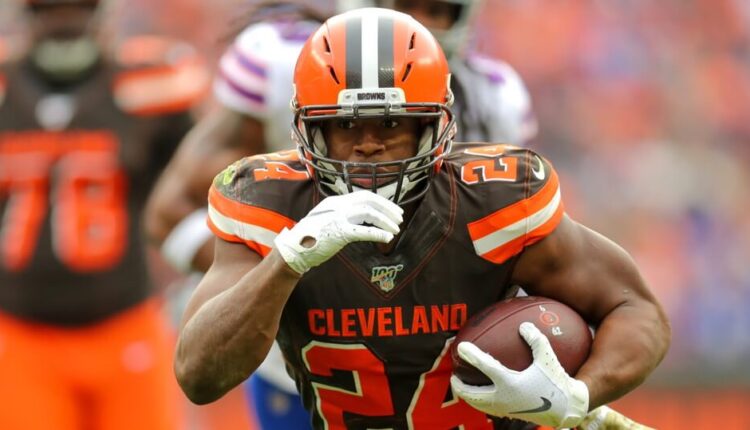 Backfields shaking up. Cryptic messages regarding missed practices. This is a pivotal stage in fantasy football and unfortunately, injuries continue to mar the integrity of the lineup decisions we have to make on Sunday mornings, often including names that weren’t close to getting drafted in your league. After a one-week hiatus from this series, we are back with the inactives list headed into the weekend of NFL Week 6. Make sure you’re picked up the guys that might benefit on the stat sheet from the misfortune of a teammate and verify that you’re stashing or starting any possible high-ceiling players who are now relevant due to injuries to others.

At this rate, just label Bengals D/ST as questionable. Team meetup for my home league #FantasyFootball team at the local hospital. 😭 pic.twitter.com/e8miMQDFVa

This series will continue to be live every Saturday morning, meaning that if brand new statuses appear, they are not covered here. You can also follow me on Twitter (@AhaanRungta) for more regular fantasy football discussions, including comments on injury-riddled fantasy rosters. If a game does not appear on this list, that means there is currently no current injury threat in the realm of fantasy relevance.

There are some very relevant fantasy injury news associated with this intentional game that kicks off the Sunday, particularly for deeper leagues. The Jaguars still miss wide receiver D.J. Chark and tight end James O’Shaughnessy due to injuries that have them on injured reserve.

Most of the fluctuating news comes from the Dolphins side. With Will Fuller V still on injured reserve, pass-catching is depleted already but Miami could also be missing Preston Williams, who was limited in practice on Friday and will be without their star wideout DeVante Parker, who could be back in time for Week 7. To top it all off, we don’t know who is starting for them at quarterback as both Tua Tagovailoa and Jacoby Brissett are still situations to monitor. It is worth noting that the Dolphins have a third quarterback on the depth chart named Reid Sinnett but he is not expected to be forced into a starting role quite yet.

Finally, as a sidenote, the Dolphins could be involved in a narrative of higher scoring that originally anticipated since their top cornerback Xavien Howard is also ruled out for Week 6.

The biggest game-changer in fantasy football will have to wait his return at least one more week as the unanimous #1 overall pick in redraft formats is still a no-go to return from his hamstring injury suffered during Thursday Night Football of Week 3. In his place, Chuba Hubbard will start in the backfield and will be backed up by Royce Freeman. In Week 5, Hubbard was very active and productive for his fantasy owners, racking up 101 rushing yards on 24 attempts and 33 receiving yards on 5 catches (6 targets).

On the Vikings side, the offensive unit has suffered some oscillatory news recently, including fantasy superstars like Dalvin Cook and Adam Thielen but they are all officially off the injury report and a thumbs-up for Week 6.

The Ravens are on the inactives update list—and it’s not all doom and gloom? The world is truly changing. While their veteran wideout Sammy Watkins is out Week 6, he will likely be replaced by the NFL debut of first-round draft pick Rashod Bateman, who is currently expected to be a full go this Sunday against the 4-1 Los Angeles Chargers.

If Rashod Bateman can do this to Marlon Humphrey, I can’t wait to see what he can do to other #NFL defenses.

His addition to this Ravens passing attack will be huge. #RavensFlock pic.twitter.com/AGlHRERSdk

On the Chargers side, a lot has been going right for them, particularly surrounding their explosive offense. One of the leaders of the pack has been the elite explosions of Mike Williams, who currently ranks as the #1 fantasy wide receiver in standard formats. That ranking could be in jeopardy, however, as he is now questionable to play against the very-able secondary of the Baltimore Ravens.

With the full injury report for the Giants spanning over 20 names, the fantasy-centric names are no relief either as it’s gruesome in that locker room at the moment. Free agent acquisition Kenny Golladay and superstar running back Saquon Barkley are already ruled out for the Week 6 matchup against the championship-contending Los Angeles Rams. Additionally, speedster wideout Darius Slayton might not be ready to make his return to the field and rookie Kadarius Toney, who showed out 189 receiving yards on 10 catches (13 targets) in Week 6, was also limited in practice on Friday.

On the other hand, the Rams have a relatively clean slate as they are a full-go on offensive fantasy weapons headed into a Week 6 matchup that could frankly be a clobbering waiting to happen at MetLife Stadium.

Unique solo case here as the legend with the spectacles is going to be missing Week 6 with a nagging hip concern that contributed to multiple missed kicks in Week 5 Primetime. Blankenship is a drop if you don’t have any IR spots to fill at the moment—so long, partner.

The Chiefs are reeling. They should be concerned at 2-3 and will likely have to win a few shootouts to become the Super Bowl threats they should be. Part of that program is to get their generational talent Tyreek Hill on the field, but he did not practice on Friday. If he plays, he will look to abuse the disappointing Washington secondary. But that’s no foregone conclusion at the moment. Of course, Clyde Edwards-Helaire moves to the injured reserve after an MCL disturbance in Week 5. The young running back will not return before Week 9. In his absence, Darrel Williams will pace the Chiefs backfield and will be backed up by Jerick McKinnon and Derrick Gore.

On the other hand, the team with no name isn’t getting any help via health themselves. Their #1 pass-catcher Terry McLaurin did not participate in practice on Friday, their dynamic running back Antonio Gibson was limited, their rookie wideout Dyami Brown was limited, and their free agent acquisition Curtis Samuel is out Week 6. All this news comes in as veteran tight end Logan Thomas is still on the injured reserve.

The Bears went takeover mode with the injuries this week. Fantasy-wise, there are situations that seem to require monitoring every week with this team. This time, lead wide receiver Allen Robinson was limited in practice on Friday and Damien Williams contracted COVID-19. In Williams’ absence, with David Montgomery and Tarik Cohen still off the field, Chicago’s running back duties will now be led by Khalil Herbert. His only backup at the position is Ryan Nall, who participated fully on Friday but is still listed as questionable for Week 6.

The circle of life continues with Joe Mixon, his health, and his backups. This time, it’s his primary backup Samaje Perine that’s in the most trouble as COVID-19 will keep him off the field in Week 6. Mixon remains questionable but head coach Zac Taylor hints at a possible full workload for his starting running back. Lies exist though and head coaches don’t care—the information on the Bengals backfield will probably remain fluid until kickoff.

Bengals RB Joe Mixon should get a full workload Sunday, per Zac Taylor.

On the other hand, Detroit is still dealing with limited practice from their two best offensive weapons, T.J. Hockensen and D’Andre Swift. Two fantasy stars, Hockensen and Swift will need serious backup plans on your roster but will likely have an irreplaceable floor in your league. Be deep at their respective positions this week because you need options.

Two dynamic run games—two run games that are likely going to look a bit different in Week 6 due to injury concerns. For Arizona, it’s Chase Edmonds, who was limited in practice on Friday.

For Cleveland, their starting elusive back Nick Chubb was already ruled out due to a calf injury. There isn’t currently long-term concern surrounding Chubb as he is expected to return in Week 7. His backup, an explosive talent himself, could see a ton of work if he plays but Kareem Hunt deals with a wrist injury himself. The remaining running backs for the Browns for Week 6 are Demetric Felton and D’Ernest Johnson.

The Patriots have serious issues fielding a healthy team right now, all across the roster. Mostly related to the fantasy game, starting kicker Nick Folk and starting running back Damien Harris were limited in practice on Friday. Folk currently has no backup on the Patriots roster and Harris’ only healthy backups stand as Brandon Bolden and Rhamondre Stevenson. It is noteworthy that the Patriots are also battered on the offensive line, making my quarterback love pick of the week a bold one to ride with in Week 6.

A relatively comfortable slate for fantasy-relevant injuries in this game at the moment but the veteran starting running back Melvin Gordon was limited in practice for the Broncos on Thursday. If his limited ability carries over to game time in Week 6, rookie Javonte Williams could be in for a fantasy game worth the talk.

Quantity-wise, there isn’t an arduous list of injuries for this game. But the Seahawks have one of the biggest names of today’s inactive list making an appearance as star quarterback Russell Wilson lands on the injured reserve with a finger injury that saw him concede late-game snaps to Geno Smith in Week 5. Wilson is expected to return around Week 10.

With Wilson sidelined against the Rams, Smith racked up 131 passing yards on a 10/17 clip with a touchdown and an interception. He also rushed for 23 yards on 3 rushes. Smith becomes a risky play in one-quarterback formats, facing the robust defense presented by the Pittsburgh Steelers.

Similarly, the Steelers themselves land a big name on this list as wideout JuJu Smith-Schuster is done for the season and will no longer appear on this list for future iterations in 2021.